I decided to modify my new plastic snow shovel with G/flex 655 Thickened Epoxy Adhesive. This winter (2011) in Bay City, Michigan, we’ve seen a couple of big snowfalls and lots of small ones with 1″ to 2″ of accumulation. Not enough snow to bother breaking out the snowblower, so I usually shovel it by hand. About 10 years ago I fell in love with the plastic snow shovels that are lightweight and the snow slides off of them easily compared to the metal snow shovels that are heavy and snow clings to stubbornly.

My problem with plastic shovels is they wear out after one or two seasons at best because my driveway is made of fiber-reinforced concrete. It is like a huge piece of 80-grit sandpaper waiting to devour my plastic shovels. 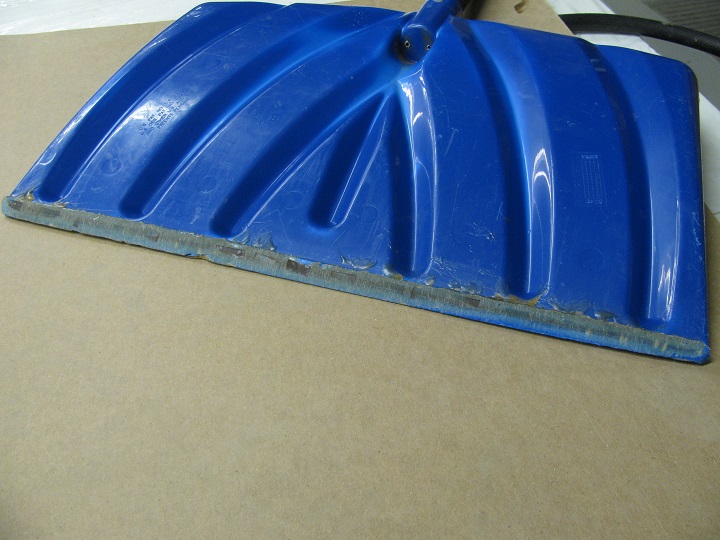 The working edge of my trusty blue snow shovel with the wear strips worn through.

Four years ago, after another shovel had been reduced to a stub of its original self, I purchased a new plastic shovel. This time I had plans for extending its life. I planned to experiment with gluing small pieces of metal to the wear edge of the shovel with G/flex 655 to act as wear strips and extend its usable life. A few days ago (three and a half winters later) I noticed the shovel no longer had its distinctive high pitch sound while shoveling the driveway. Looking down at the tip of the shovel, the last of the original metal strips had finally worn away. These were ¼” wide strips of fairly soft steel that were about .040″ thick. The shovel was still like new otherwise, so I brought the shovel back into the shop to repeat the process, but with a couple of upgrades.

This time I decided to use harder steel in the wear strips. I located an old Starrett™ hack saw blade made with heat-treated steel. I ground away all the paint and exposed freshly abraded steel then cut it into½” long strips on a metal chop saw. I prepped the plastic surface in the shovel once again with a brief pass of the propane torch to oxidize the surface so G/flex would stick to it aggressively. Finally, I glued the ½” pieces of saw blade down along the working edge of the shovel with G/flex 655 Epoxy Adhesive and let it cure. Since then I notice my wife Mary is always grabbing my improved blue shovel instead of using a new unimproved one we recently purchased. I asked her why she uses the blue shovel instead of the new one and she said “I love that old blue shovel it seems to get under the snow better than the others.” And it does. 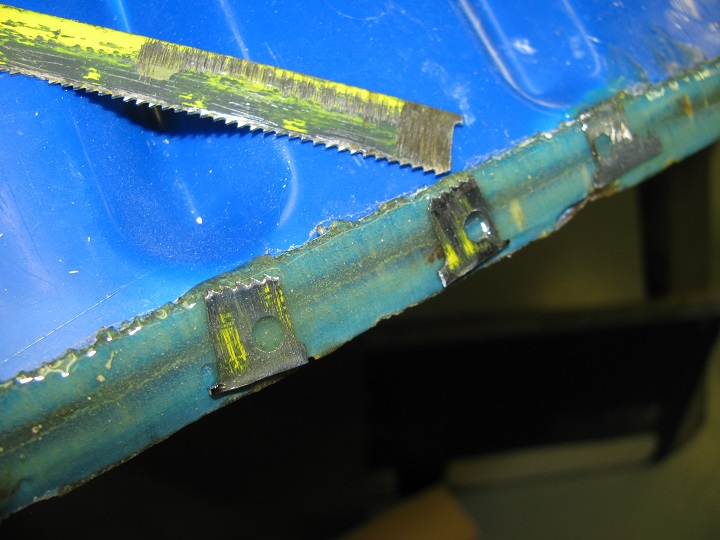 My snow shovel’s new and improved wear strips are made of hardened steel.

In conclusion: It may not make sense to go out and purchase a G/flex655 kit with the sole purpose of modifying your snow shovel, but if you do, you will have plenty left over for other minor but equally practical projects. The point in all of this is to once again demonstrate how the cured characteristics of G/flex Epoxy allow you to be creative with it on all sorts of novel uses