VOC Testing, epoxies, and your shop

Many materials used in large manufacturing processes and even small do-it-yourself jobs, emit volatile organic compounds (VOCs) and other air pollutants. Paints and other coatings, adhesives, resins and cleaning solvents are all sources of air pollution. Each product emits different types and varying amounts of air pollutants. Federal, state and local governments have passed legislation (e.g., the federal Clean Air Act) to reduce air pollution and prevent the depletion of the ozone layer by regulating the emission of air pollutants. Along with the regulations, government and public attention has focused on what solutions are more environmentally acceptable, easiest to implement, least disruptive and least costly. The result of this attention is that certain materials are beginning to be favored, or even regulated, over others. Among the engineering thermoset plastics, epoxies are generally recognized as emitting very small amounts of pollutants to the air because they usually contain no solvent and there is no volatile monomer, such as styrene, present.

About the Clean Air Act

Few people realize that the original federal Clean Air Act (CAA) was established in 1970. There have been several major revisions to date. A revision known as the Clean Air Act Amendments (CAAA) of 1990 added sweeping new regulations to reduce air toxics emissions, acid rain, and human health risks and to force sources to reduce emissions of specific pollutants. With these latest amendments, the CAA has become a comprehensive and complex federal statute, devised to prevent and control air pollution, with the potential to affect almost every business and private citizen in the country.

The public is already seeing the effects of some of these regulations. CFCs, which are used in refrigerators and cooling systems, are slowly being phased out. Automobile manufacturers are scrambling to find a replacement for automobile air conditioners before 1995. Methylene chloride, which was the base chemical in paint strippers for many years, will soon be unavailable. And whether you’ve noticed it or not, most solvent-borne paints and coatings have been reformulated to reduce VOC content. Some traditional products are no longer available. People who live in areas where air pollution is particularly bad have seen more intense regulation, such as restrictions on burning wood in fireplaces and cooking with charcoal in back yard barbecues.

If you are involved in industrial or commercial operations which use materials that generate VOCs or other pollutants, you need to be informed of the CAA Amendments, and how they may affect future business decisions. The following paragraphs are intended to help you make a prudent, cost effective decision by giving you a basic understanding of the provisions and implications of the CAAA, as the Environmental Protection Agency (EPA) begins to enforce new regulations.

It may take the EPA and individual states some years of further regulation development, fine-tuning and implementation to actually achieve emission reduction goals. However, some of the amendment requirements may compel companies to make decisions for the long term, now. A company’s need to comply with the stringent control requirements will hinge on whether its facilities exceed emission rates or threshold quantities for certain air pollutants. Now is the time for companies to develop both short and long term compliance strategies to minimize their future compliance costs and noncompliance risks.

Several programs under the CAAA may greatly affect a company’s future compliance, business and technology decisions. Some programs may actually require that Control Technique Guidelines (CTGs) be imposed on certain sources of pollutants for tighter control of emissions. These CTGs are based on joint EPA and private industry reviews and studies of other sources, in the same industrial category, that are successfully using a certain control technique to reduce emissions to an acceptable level.

The Control Technology Center, established by the EPA to provide technical assistance to state and local air pollution control agencies, published VOC EMISSIONS FROM FIBERGLASS BOAT MANUFACTURING, a study conducted by Radian Corporation. This study states that the control technique offering the greatest potential for reducing VOC emissions at low costs is the use of lower VOC-containing materials. It is possible, for example, that after further study and review by EPA and private industry, replacing styrenated resins with lower-VOC containing resins like epoxies could become a required control technology for the boat building industry.

The epoxy products offered by Gougeon Brothers can offer substantial reductions in VOC emissions compared to conventional polyester and vinyl ester resins. All Gougeon epoxy products used for coating, laminating or general bonding were tested for volatile emissions to compare them to other products on the market and to demonstrate that the products comply with the federal Clean Air Act and other air quality regulations.

Comparing materials for VOCs and other pollutants

When comparing VOC information of different products, you should be certain that the results were obtained by similar test methods and under similar conditions.

The Volatile Content of WEST SYSTEM epoxy products used in the manufacture of composites was determined by using EPA Method 24 as described in The Federal Register (40 CFR Part 60). In this test method, a designated quantity of coating specimen is weighed into an aluminum foil dish containing 3 milliliters of an appropriate solvent, dispersed, and heated in an oven at 230°F (110°C) for 60 minutes to force out volatiles. The percent volatile is calculated from the loss in weight. EPA Method 24 accommodates two-component coating systems by premixing the individual components in the correct proportions prior to dissolving them in solvent. The solvent-reduced specimens are permitted to stand at room temperature in the aluminum dishes to allow the individual components to react prior to being placed in the oven.

See Table 1 in the gallery below for a summary of the results obtained in this round of testing.

Compare the results in Table 1 with some regulations. California’s South Coast Air Quality Management District (SCAQMD) was one of the early leaders in air quality regulations. SCAQMD Rule 1106 states that a two-component marine coating shall not exceed a VOC content of 340 g/L. Rule 1136 for Wood Products Coatings states that a person or facility shall not apply any coating to a wood product which has a VOC content exceeding 550 g/L. We are quoting SCAQMD standards here only as a point of reference to demonstrate that our epoxy formulations are compliant with VOC regulations.

When looking at these results, remember that the test method subjected the materials to a temperature of 230°F. Under normal conditions of use at room temperature, our epoxy formulations will have almost no weight loss. The volatile fraction will be much greater at elevated temperatures. Dissolving the uncured coating in a volatile solvent also causes an increase in the volatile fraction of the coating. These results, from EPA Method 24, represent a worst-case scenario. Some of the air quality regulations allow testing to be conducted under normal conditions of use. For the results reported in Table 1, we have followed the more rigorous, and more widely accepted EPA Method 24.

To demonstrate that the results from the EPA test method do not always represent how the material would perform under conditions of actual use, tests were performed to determine weight loss of a thin film of resin cured at room temperature, without the addition of solvent. Small portions of mixed resin were poured into the bottom of aluminum dishes, to form films approximately 20 to 30 mils thick, and allowed to cure at room temperature for 24 hours. The samples were post cured at 110°F and then baked at 230°F for eight hours. The weight loss was measured and the total volatiles were calculated. These results are summarized in Table 2 in the gallery below.

You will notice that the VOC content determined by this method is much lower than that determined by EPA Method 24. We feel that the results of this testing are more representative of actual use since the materials are not exposed to solvent and are not subjected to extreme temperatures until the cure process is nearly complete. The results from this method showed lower amounts of volatile emissions than the EPA method, and the results were more consistent. However, with this test method, the volatile fraction is a function of the film thickness. Thinner films have a higher percentage of volatiles because the surface area to volume ratio is increased. The results reported above have all been normalized for a 25-mil (0.64-mm) film thickness.

To understand the fallibility of the EPA method for this type of resin systems, compare the results for WEST SYSTEM 105/207 between the two methods. Determination by the EPA method yields a very high result for 105/207. In actuality, one would expect the result to be very similar to 105/205 or 105/206. Our alternative test method, which more closely duplicates “real world” conditions, yields results for the 105/207 which are more consistent with expectations. The probable reason for the odd results obtained with the EPA method is the use of solvent; it is difficult to find a solvent which will completely dissolve the mixed 105/207. Another discrepancy is seen with the polyester finishing resin. It contains a wax which forms a film over the surface of the curing resin and stops volatiles from escaping to the air. When following the EPA Method, the solvent prevents the wax barrier from forming and the volatile emissions are quite high; our alternative test method allows the barrier to form as it normally would and the volatile emissions are substantially lower.

A few simple calculations, based on the results of our alternative test method, will show the potential that some of these materials have to pollute the air. Applying ten gallons of gelcoat will put 16.4 pounds of VOCs into the air, assuming 100% transfer of the gelcoat from the container to the part. When you account for overspray, the amount of VOCs will be even higher. Doing a laminate which requires ten gallons of vinyl ester resin will put 30.7 pounds of VOCs into the air; a laminate using the same quantity of laminating epoxy will emit only one-half of a pound of VOCs.

The above data demonstrates that our epoxies release significantly fewer volatile organic compounds to the environment than conventional styrenated resin systems. This feature will make compliance with emission guidelines much easier for boat or other composites manufacturers. For this and other reasons, many manufacturers of larger boats have already started to switch from traditional polyester resins to epoxy resins. However, a significant fraction of emissions come from acetone and other solvents used around the shop. Steps should be taken to reduce emissions from solvents also. Many alternatives to the conventional highly volatile solvents are now on the market.

Note: The preceding article mentions specific rules and regulations enacted by the United States Federal and respective State Governments to regulate activities within the U.S. and its territories. These rules may not be applicable outside the boundaries of the U.S. or beyond the jurisdiction of the U.S. Federal and State Governments. Refer to the governmental authority having jurisdiction in your region for relevant air quality and environmental laws. 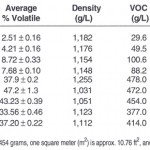 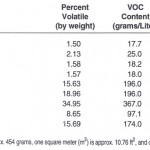