I thought Jan Gougeon’s idea of an air-cushioned boat launcher was crazy at first. Then I thought if I could build a platform narrow enough to fit between the hulls of my catamaran, low enough to fit under the beams and powerful enough to lift the entire catamaran, it would be feasible to levitate the boat over yard, beach, sand bars, virtually anywhere.

I conferred with our test engineer Bill Bertelsen, who along with his father, has experimented with and studied air cushion craft since 1957. (The original Bertelsen Air Cushioned Vehicle “Aermobile 72″ is in the Paul E. Garber Facility of the National Air & Space Museum. He assured me that with the square footage and horsepower I proposed, the concept was totally workable. I envisioned a strictly utilitarian craft made to move catamarans that weigh no more than 500 pounds. (Actually, with more square footage it could lift a lot more).

Since I had never even seen one of these things before, I contacted Don Miller at Arrowprop Co. He thought my plan to lift and launch catamarans had merit and should work, so I bought a set of their plans for about $15. The literature that came with the plans covered the fundamentals of how an air cushion craft works, provided sources of related equipment and gave patterns for the skirt and wooden platform. Because my intended application was a major deviation from the design, I used the Aeroprop prints primarily as a guide.

It would be the ultimate in simplicity—a two-system craft. System 1—It floats. System 2—It lifts via an engine-driven prop. A thrust motor and steering system were not required. It would measure 10’  x 7’. I listed the components I’d need:

I wanted it to be a “boat” that would float on water when not on the air cushion, so I had to build it watertight (Aeroprop’s design is also intended as a floating craft). I bought three defective interior doors for cheap, and bonded these to make a 10’x 7’ platform.

To this platform I bonded a smaller frame with a few gussets for stability and stringers for the bottom. I bonded a door skin to this, creating a watertight, box-like bottom. Prior to bonding this “bottom” on, I fabricated gussets and a circular wall 24″ in diameter, forming the prop’s ductwork. One end of the boxed frame would serve as the air splitter. (An air splitter (above) divides air forced through the ductwork by the prop: about 25% of the air goes to inflate the bag-type skirt that seals the perimeter to the ground, and the rest goes to lift the craft.) I covered the deck with 12-ounce fiberglass for a tough, utility surface.

The motor mount was more challenging. I didn’t want to fabricate it out of steel. It had to be strong, stiff yet not so bulky as to excessively block air movement. I made it so the four wooden stringers would be continuous and address the tensile loads exerted by the lifting motor (see illustration). This was a serious gluing operation because if it fails, the motor could take right off skyward in a most colossal spectacle. I used WEST SYSTEM 105 Resin® and 206 Slow Hardener® with 404 High-Density filler. Once shaped and drilled to accept the motor and its mounting bolts, I placed it over the ductwork with the prop installed so there was only 1/16“ clearance around the circumference of the duct. With such a close tolerance, the prop is effectively end-plated and its efficiency measurably increased. A sturdy screen now covers the intake to protect hands from the spinning prop.

The skirt is fabricated from a rubberized nylon material I purchased at an awning and tent shop. It weights about 14 ounces per square yard. The Aeroprop prints gave a full size pattern of a mitered corner. I sewed them together on my sewing machine and coated the stitching with Shoo Goo II to make them waterproof and air tight, yet still flexible. One edge of the skirt is attached to the inner frame and the other to the outer edge of the platform with stringers set in silicone sealant.

After 75 hours of labor over two weeks, the craft was completed and the launch day had arrived. I was skeptical that this contraption would work. At 7:00 a.m. I oiled up the 3.5 h.p. motor, gave her some fuel and started her up. In two seconds it rose off the garage floor and proceeded to float right out of the garage. This was due to the “fall” the garage floor has for drainage. The air cushion craft flowed like water. I hooked my dog’s leash to a screw eye in the deck and took it for a walk down the road, then across the lawn to the beach over the sand and soft mud-like stuff, then to the water. It was a miracle.

Now, I maneuvered it under the catamaran, and shut it down. I propped some driftwood on her deck and under the catamaran’s cross beams and started her up again. Without hesitating, the Air Cushion Launcher (ACL) lifted the boat clear of the ground and I could scoot the catamaran effortlessly wherever I wanted (actually, it took 20 lb of tugging to move the boat over dry grass, compared to 50 lb without the ACL.

I picture the ACL as a great tool for catamaran clubs that require a crew of people to launch boats – which is a lot of work and sometimes a safety issue as people hurt backs or slip while helping. Or the husband and wife team that simply cannot drag their catamaran without help. (If you sail a beach catamaran you know what I’m talking about). The thought suddenly popped into my mind that I could have a little larger catamaran—with a cuddy, I could load her up with the equipment, some food and drinks and still be able to launch her myself. Is that what I really want? I’m going to have to give that some serious thought. 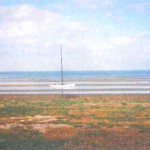 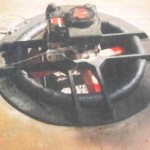 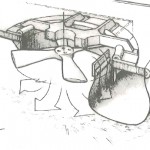 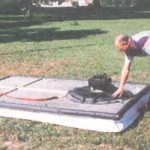 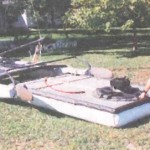 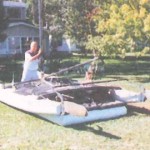 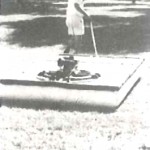