The Muskegon Luge Club has a run set up at the Muskegon State Park and was in need of rental luge sleds for those people learning to luge. No luge sleds are built in the United States, and the club contacted us about the possibility of building sleds.

Our company, Lindahl Composite Design, is a small product development firm that has specialized in the marine market for the past 10 years. We are located in Fenville, Michigan. We did a prototype in 1996 that was well received in Muskegon and also tested at Lake Placid. This season we contracted with the club to build 10 sleds.

We used WEST SYSTEM epoxy to laminate the ash to form the runner body with steel bolted to the bottom. The seat is a welded steel basket with a canvas insert to lie on. The seat assembly is attached to the runners. This allows the runners to flex, giving the rider some ability to steer. The end result has been very popular at the Muskegon Luge Club’s run. 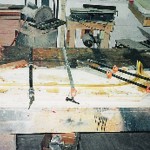 We used WEST SYSTEM Epoxy to laminate the ash to form the runner body. 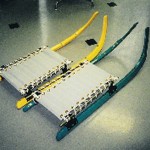 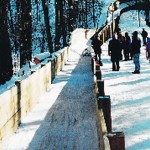 The end result has been popular at the Muskegon Luge Club.