At the end of the season this year while riding in a local terrain park, I misjudged the approach to a pipe and ended up crashing the nose of my snowboard into the end of the pipe. Fortunately, I was able to ride away from the impact. Later in the day, I noticed that the nose of the snowboard had been deformed. When I got home, I studied the damaged area closely and determined that it was not safe to ride the board in that condition. The entire nose area had become soft and flexible because much of the wood core in that area had been broken. In addition to the bent nose edge, the top sheet had cracked. Left as is, this would have allowed water to penetrate to the core of the snowboard which would have made it unrepairable. The technicians at my local snowboard shop told me it could be repaired but cautioned that I needed to use an epoxy that remains flexible after it cures to prevent the repair from breaking. END_OF_DOCUMENT_TOKEN_TO_BE_REPLACED

I begin a two-part series that will feature a custom boat project being built by Van Dam Custom Boats in Boyne City, Michigan. We featured a Van Dam-built boat in Epoxyworks 14, the beautiful and unique Alpha Z. We want to give our readers a glimpse into what is currently happening at this world-class boat shop. END_OF_DOCUMENT_TOKEN_TO_BE_REPLACED

I built the Lemniscate, a 16′ runabout with a chineless gull wing hull, in my garage over the course of a few years. It was the culmination of an idea I long had for a design that would provide a soft ride with its deep-vee hull, but at the same time exhibit excellent fuel economy. The chineless gull wing hull shape captures and efficiently redirects otherwise wasted bow wave energy downward to create lift. It also safely captures ram air under the “wings” (noticeable starting about 40 mph) and attains a comfortable top speed close to 50 mph with the 115hp outboard motor. END_OF_DOCUMENT_TOKEN_TO_BE_REPLACED

In March of 2013, after 42 years, my mom and I sold the family business that she and my dad started in 1971. I was still in high school when I started working for my parents, and as a result, I have never filled out a job application or been to an interview. At 56 years old I wasn’t about to start now! So in the spirit of following one’s own path I turned my hobby into a new business and opened Nelson Niederer Woodworking. END_OF_DOCUMENT_TOKEN_TO_BE_REPLACED 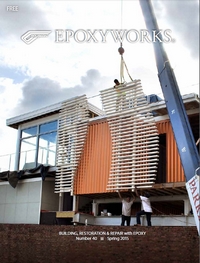 Cover photo: Installing some of the assembled FRP louvered panels on the rooftop residence.

Renew Urban Charleston, LLC in Charleston, South Carolina has been using WEST SYSTEM® Six10 Thickened Epoxy Adhesive to glue hundreds of pultruded fiberglass channels and square tubes together to form decorative louvers. When installed on the building, the louver assemblies create an aesthetic detail that draws attention to the unique rooftop residence on King Street in Charleston. END_OF_DOCUMENT_TOKEN_TO_BE_REPLACED

On January 1, 2015, we began selling a new WEST SYSTEM Epoxy pigment. We already had the 501 White Pigment and the 503 Gray Pigment, so it seemed right to introduce our new 502 Black Pigment. Just like the 501 and the 503, it alters the color of the epoxy mixture without affecting the cured physical properties. Similarly, the maximum acceptable loading is 3%. This is great for hiding a surface with a single coat of black epoxy. Adding more pigment will increase the opacity, but can skew the mix ratio because there is epoxy resin in the pigment. END_OF_DOCUMENT_TOKEN_TO_BE_REPLACED

I traveled to the U.P. (that’s what we Michiganders call the Upper Peninsula) on June 7th to attend the Great Lakes Boat Building School class of 2014 graduation ceremony and participate in the yearly on-site PAC (Project Advisory Committee) meeting which I currently sit on. I arrived on a beautiful sunny day with temperatures in the mid-70s, a stark contrast from my last trip to the school in mid-April when I awoke to 4” of new snow and 3°F! For those of you who live in the southwest where the temperature has been hot for some time, by contrast, the great lakes finally became 100% ice-free at the beginning of June. END_OF_DOCUMENT_TOKEN_TO_BE_REPLACED

Here at GBI, we’re not just your average epoxy “retailer.” We are the leading provider of quality epoxy products and services. Quality epoxy as in; we dream a big, sticky, epoxy dream, research it, develop it and produce it.  Service as in; packed within our 20,000(ish) square foot walls is a wealth of knowledge and experience so vast that it has enabled us to educate hundreds of people worldwide on the features and benefits of West System® epoxy.  Spanning from A to Z….Alaska to Zimbabwe. . Yeah, I know. Alaska. Mind. Blown. END_OF_DOCUMENT_TOKEN_TO_BE_REPLACED

I hear it said increasingly often in the last couple of years as I meet people during my travels “Who will be the next generation of tradesmen? Who is going to work on our cars, boats, and homes?” This is a serious lament posed by today’s tradesmen, potential employers who have a very hard time finding apprentices and workers to learn their trade. The U.S. is in dire need of men and women willing to work with their hands and develop the skills necessary to build and repair all our…stuff. END_OF_DOCUMENT_TOKEN_TO_BE_REPLACED

A Rendezvous with History

In my article Profile of an American Craftsman the photos of the Les Staudacher jet-powered boat at Marine Services Unlimited provide a photographic history of the first and last run of the Tempo Alcoa. What follows are the details of that historic event.

In 1957 Guy Lombardo and the Royal Canadians were in high demand. The band leader and his music were well known throughout the U.S. and Canada. Lombardo was also a successful and well-known driver of Gold Cup hydroplane speedboats. Prior to WWII, Lombardo had a distinguished 225 cubic inch class career and moved up to the Gold Cup circuit after the war when he bought the proven Champion My Sin from Zalmon Simmons in 1948. END_OF_DOCUMENT_TOKEN_TO_BE_REPLACED