Above: Babyface Nelson is a replica of Baby Bootlegger, a Gold Cup racer designed by George Crouch and built by Nivens in 1924. What was I thinking? That phrase kept running through my mind during the 2000 hours over two years it took to build Babyface Nelson.  Now that it’s complete and I’ve logged 50 hours on the water, I can say it was a worthwhile venture. It’s too much fun! People have commented that it must have taken a lot of patience to complete the project. Patience had nothing to do with it: it was perseverance. I ran out of patience about the second layer of cedar planking!

Baby Bootlegger won the Gold Cup in 1924 and 1925. The original boat is alive and well and in the good hands of Tom Mitler. Tom was gracious enough to give me a ride and let me drive “the Bootlegger.” And that’s why I took on the project. Baby Bootlegger is the niftiest boat I have ever seen. And the ride proved to be just as great. I love my boat, but the real McCoy is something special.

I started thinking about the Babyface Nelson project before I finished building my 22-foot Hacker Gentlemen’s Runabout replica, Full Nelson. I had accumulated some partial drawings, photos and articles but needed more detail. I ran into a gentleman at a small boat symposium who said he had the plans and would send me a copy. I couldn’t believe it! I later called him and he said he’d be glad to send them, but it might be easier to get them from the Mystic Seaport Museum. One phone call and $70 later, I was a member of the museum and in possession of an almost complete set of plans (with offsets) for my dreamboat.

The original construction is a work of art and consists of lots of steam-bent oak frames and double mahogany planking with overlapping seams and exposed brass screws and rivets. The quality of workmanship is amazing. In my research, I learned that Steve Van Dam (Van Dam Custom Boats) had produced a replica of Baby Bootlegger (Fast With Class) using the cold molding technique. I arranged a meeting with Steve, and he was very helpful in sharing his experience with me. I was able to arrange an “inspection” of Fast With Class with its owner Bill Jacobs. This was extremely helpful. Van Dam’s workmanship is the best, and I owe a great deal of my humble success to this opportunity.

At this point, I might add that all of the builders and restorers that I have come to know were most generous with their advice and counsel when I asked, which was often. Along with Steve Van Dam (Van Dam Custom Boats), Steve Northhuis (Mackatowa Bay Boat Works), Don Danenburg (Danenburng Boat Works), Russ Arrends (Cadillac Boat Shop), Dick Sligh (Grand Craft), and Doug Morin (Morin Boats) were always supportive. Jim Derck at Gougeon Brothers was my WEST SYSTEM® Epoxy advisor. It took a bit of glue. I was also fortunate to have two expert metal workers, Buck Boudeman and Dave Battjes, a block away, who helped with cut water, steering, etc. Special thanks must go to my machinist friend, Harry Scharfenberg, who fabricated the special rudder and shaft bearing assembly. It’s a work of art in itself.

Once I obtained the plans and selected the construction method, the project was fairly straightforward. The lofting took a couple of weeks and went well considering that the plans were almost 80 years old and were intended for a one-of-a-kind boat. The resulting lines were quite fair and required little correction in the lofting. One near-disaster was the placement of the “shaft line.” It was different by one inch from one sheet of drawings to another. I initially chose the wrong one but found the error just prior to boring the shaft hole through the bottom. Measure twice, cut once. Oh, how true that saying is. 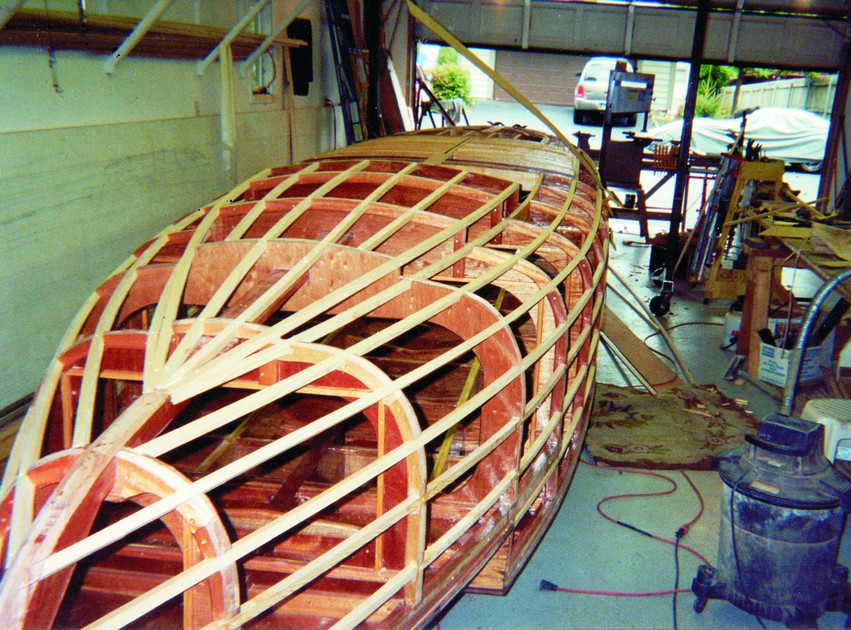 After the hatches and their frames were constructed, the topsides were ready for planking.

I set up a strongback to support all the frames. The boat was started upside down and remained so until the bottom was complete. The frames were constructed of 3/8″ 1088 Philippine mahogany plywood with solid mahogany “cheeks” to provide a surface for fastening stringers and planking. The inside of the frames was supported with ½” square strips of spruce to keep the frames fair and offer additional support. With the rolled sheer, the frames were cut out of “solid” sheets of ply with no seams. The “doughnut hole” waste was eventually put to good use one way or another. The frames were notched and spruce planking stringers were set in the topsides and deck. The bottom was supported with mahogany intermediate floors in lieu of planking stringers. All chines, stem, stern, transom knees, keel, etc. were mahogany. 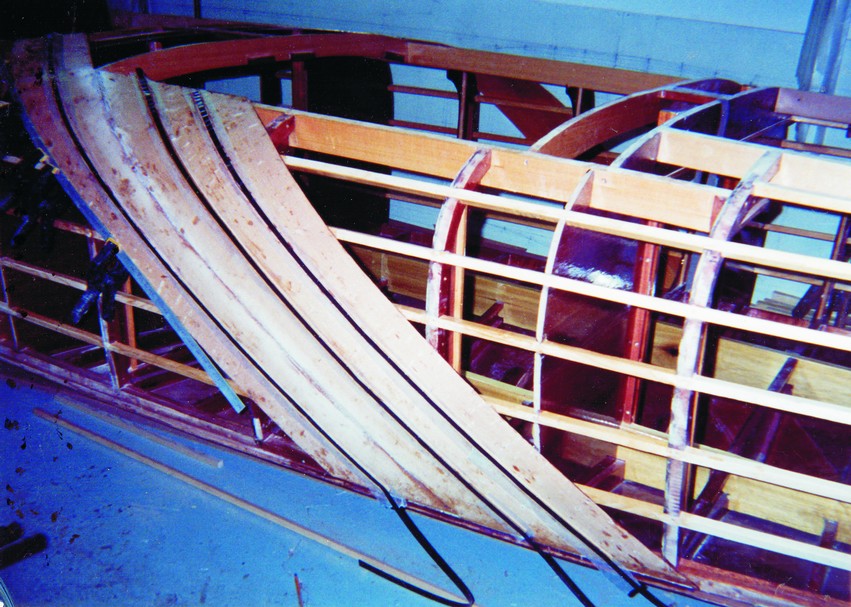 The first two of three layers 1/8″ cedar veneer on the 45 bias alternating as on the bottom were applied to the frame. 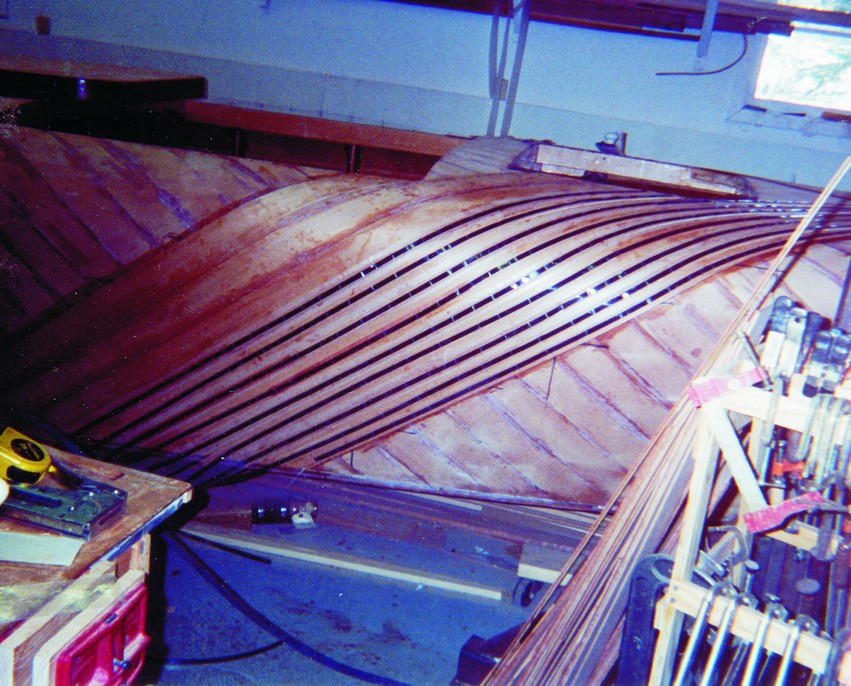 Mahogany planking on Babyface Nelson was continuous from the chine to the deck centerline.

The bottom was fabricated with one layer of 1/8″ 1088 mahogany ply in 8″ and 6″ planks, 45° on the bias. This was followed by two layers of 1/8″ Western red cedar veneer 6″ and 8″ wide also on the bias alternating direction. The final layer was 1/8″ African mahogany in 3″ wide longitudinal planks. All layers were glued with WEST SYSTEM Epoxy and filler and stapled in place. The bottom was faired and finished with four coats of clear epoxy. (The inside of the bottom was sealed with two coats of clear epoxy.)

The boat was rolled with a gantry crane and assistance from the Gull Lake Freshman football team (just in case). No problem.

The temporary stem to stern king plank that was installed to keep the deck side of the frames fair was removed and replaced with a permanent one. Parts of the plank were eventually removed as combings and carlings were added. The remaining planking stringers were then installed to the topsides and deck. The hatches and their frames were constructed and the topsides and deck were ready for planking. With the rolled sheer, the planking was continuous from chine to deck centerline (king plank). Three layers of 1/8″ cedar veneer on the 45° bias alternating as on the bottom were applied to the frame. Again, the final layer was 1/8″ African mahogany. The total project consumed some 60,000 staples of which 55,000 were pulled after the epoxy was set, but before totally cured. Late nights in the shop-this was not the fun part. 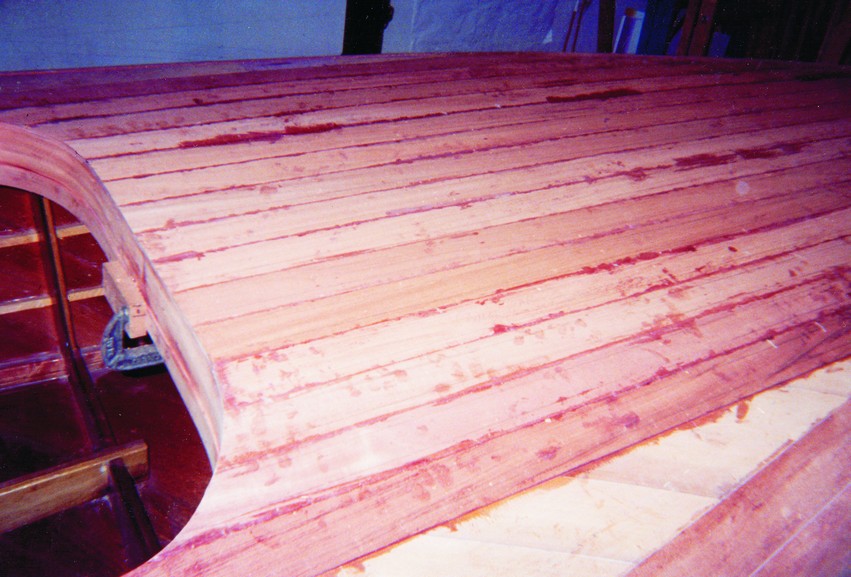 The final planking layer was 1/8″ African mahogany. The total project consumed some 60,000 staples of which 55,000 were pulled after the epoxy was set. 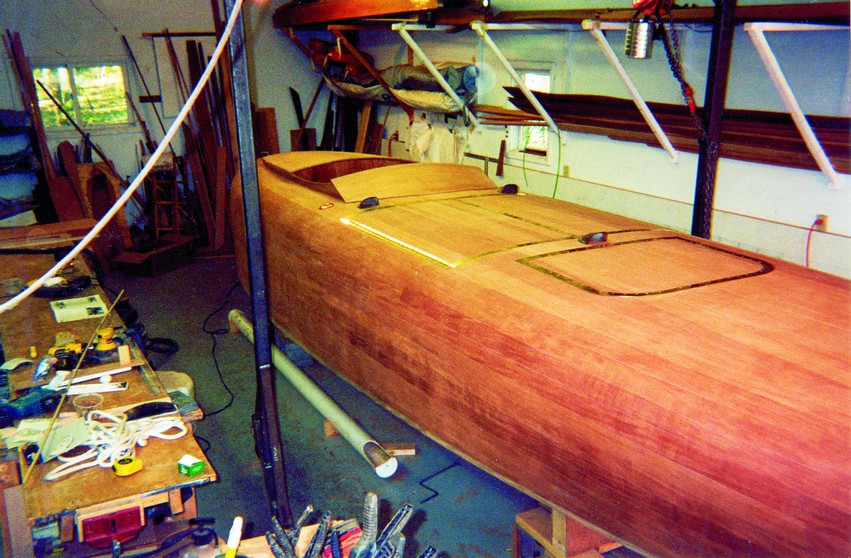 Final fairing and finishing was a lot of work. After many hours of longboarding and block sanding, four coats of tung oil, ten coats of Epiphanes no-sand, and three coats of Z-spar Flagship, it was pretty much done. 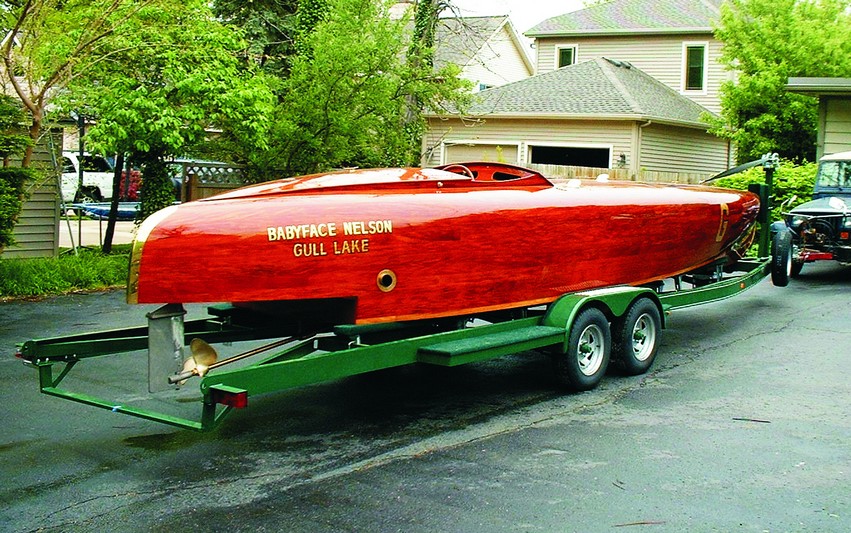 Babyface Nelson is eye-catching from any angle, in or out of the water. Hutchinson’s next project, a bolger designed, 23′ fantail launch, is well underway.

Each layer of laminate was roughly faired to keep the need for fairing the final layer to a minimum. My favorite tool might be the air file or my 8″ grinder; I’m not sure. Without them, I’d still be sanding. Even with these, there was still a lot of longboard and block sanding. (This wasn’t the fun part either.) Four coats of tung oil, ten coats of Epifanes™ no-sand (I love it), three coats of Z-spar Flagship™, and it was pretty much done.

The power was provided by a “vintage” 350 G.M. small block with a complete re-build including a 1.5 to 1 reduction Velvet Drive transmission. If I ever do something like this again, I’ll go 100% new. The engine runs great and I saved some money, but the time and anguish ain’t worth it. The driveshaft is 11’4″ long and supported with a whip strut and a pillow block. The steering is Teleflex cable.

Babyface Nelson is a wonderful boat of a design that was way ahead of its time. It’s a real hoot to ride and drive. The top end is about 50 mph and Bruce says she handles great at that speed. For more photos and information, visit gulllakewoodenboats.com.

Babyface Nelson is eye-catching from any angle, in or out of the water. Hutchinson’s next project, a Bolger-designed, 23′ fantail launch, is well underway.