I will start by saying that, in my opinion, most carbon fiber bicycle frames that have sustained damage from an impact should not be repaired—there are too many damaged fibers that are typically unseen. The two repaired frames featured in this article had damage caused by operator error, not impact. The last two bicycle frames are prime examples of parts that should not be repaired for safety reasons.

A good friend of mine who works at a Specialized bicycle shop in Saginaw, Michigan asked if I could repair a bike frame with chainstay damage caused by a customer-tuned front derailleur. After seeing the damage in person, I knew the frame was sound and definitely repairable. There was no major impact with hidden damage; it was simply a matter of replacing carbon fiber that had been ground away by a dropped chain. 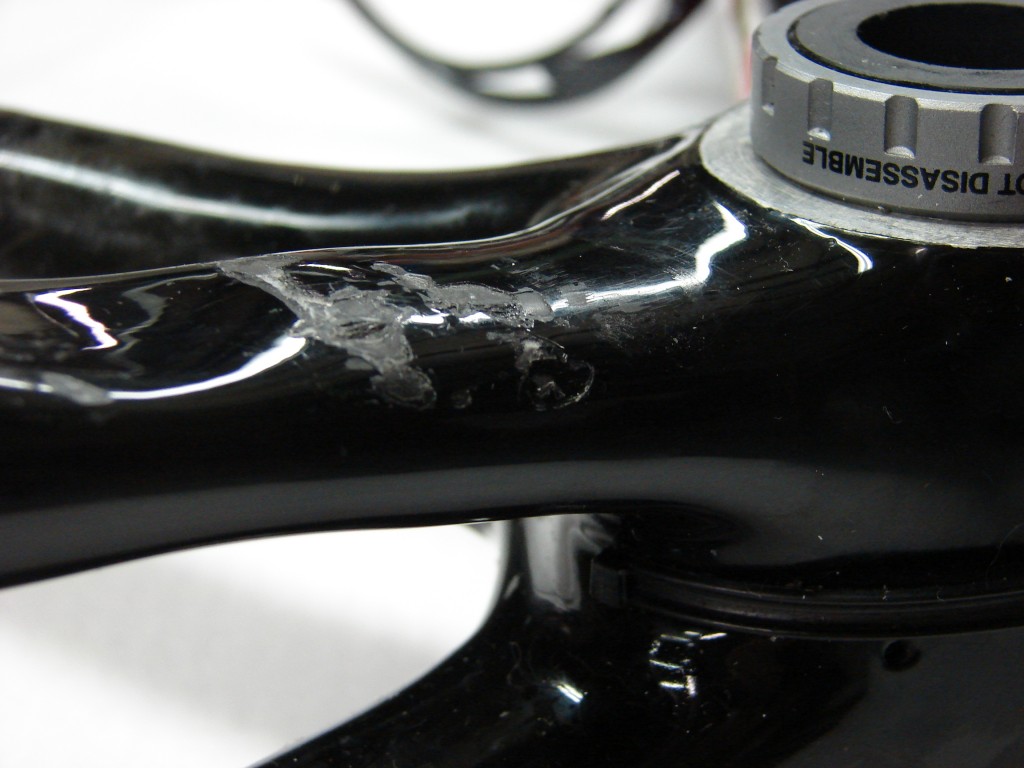 The damage to the carbon fiber bicycle frame. 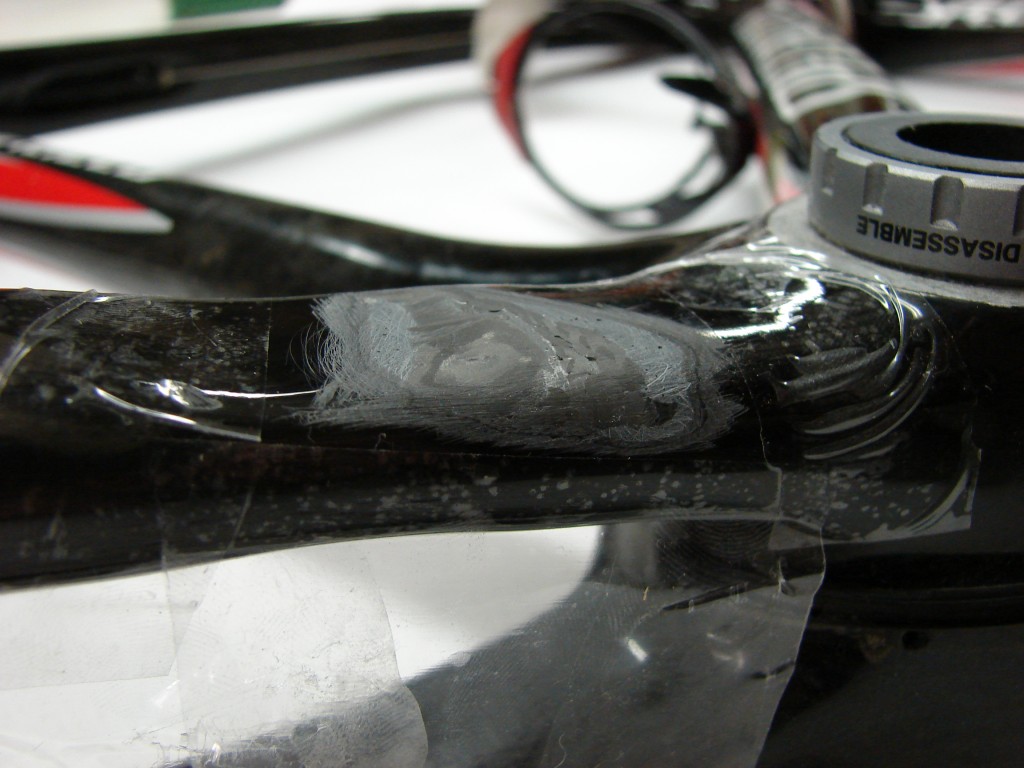 The bike frame prepped for repair

The first step was to sand down the area by hand, taking note of any fibers and the orientations as I went until I reached good laminate. Luckily, this area had quite a thick layer of filled resin for cosmetic reasons and the damage barely went into the first layer of structural carbon fiber. I started the rebuilding process for the first layer using strands of carbon fiber oriented in the right direction laminated with WEST SYSTEM® 105 epoxy Resin®/205 Fast Hardener®. Although difficult to determine accurately, I estimated a 100:1 scarf ratio based on the material removed. After this first layer cured, I sanded the area to take down any high/rough spots. 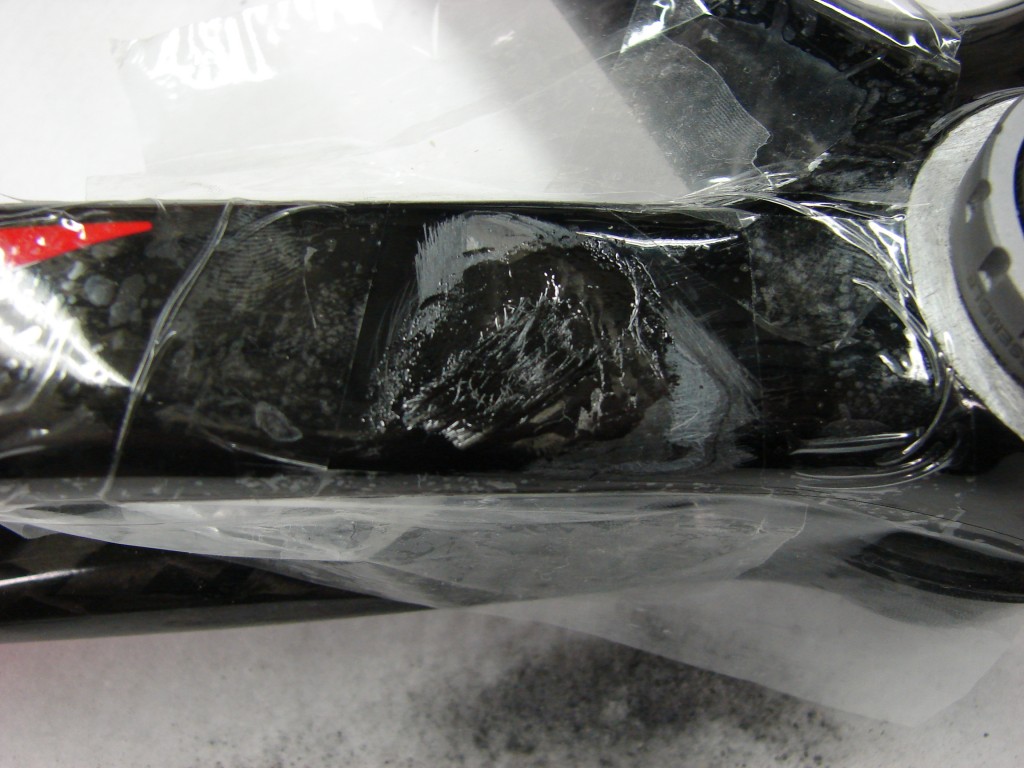 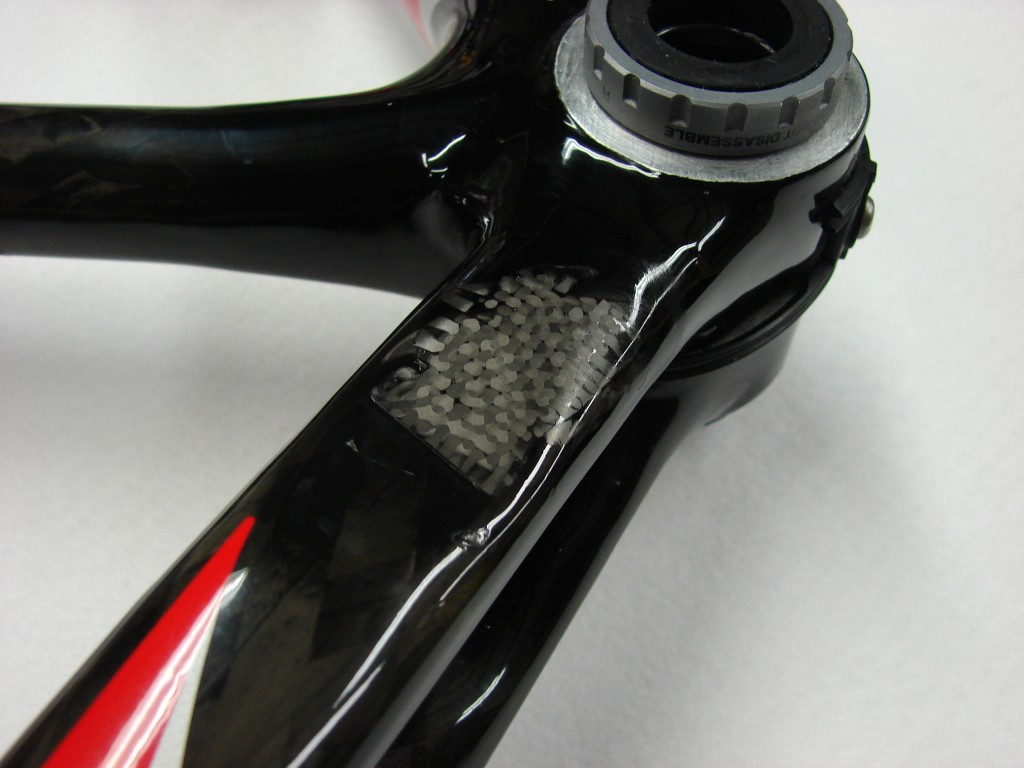 To take the place of the filled resin, I used a layer of 5.7oz/sq yd woven carbon fiber fabric. I used clear packaging tape both to mask the rest of the frame and get the fabric to lie down as smoothly as possible. Once this cured, I sanded it fair, blending it with the rest of the chainstay and polished it as it is a cosmetic, sacrificial layer.

Shortly after I repaired the Specialized frame, I had an opportunity to repair a track bike. The owner had over-torqued the seat post bolts, causing the front of the integrated seat post clamp to split. Once again, the damage was not caused by an impact and it was clear how far it went into the frame. To make it easier to work on, I hung the bike from the ceiling as there wasn’t a round tube I could clamp into my bike stand.

To start, I carefully drilled a crack stopper hole to prevent it from going any further. I then sanded the area and prepared it for bonding. I used 105 Resin/205 Fast Hardener with 703 Unidirectional Carbon Fiber Tape to reinforce the seat clamp in three layers/steps. I let the epoxy cure and sanded it fair between layers to better control the final shape. Once the final layer was on and shaped/faired, I prepped for paint. I covered the repair with two coats of black one-part polyurethane paint. 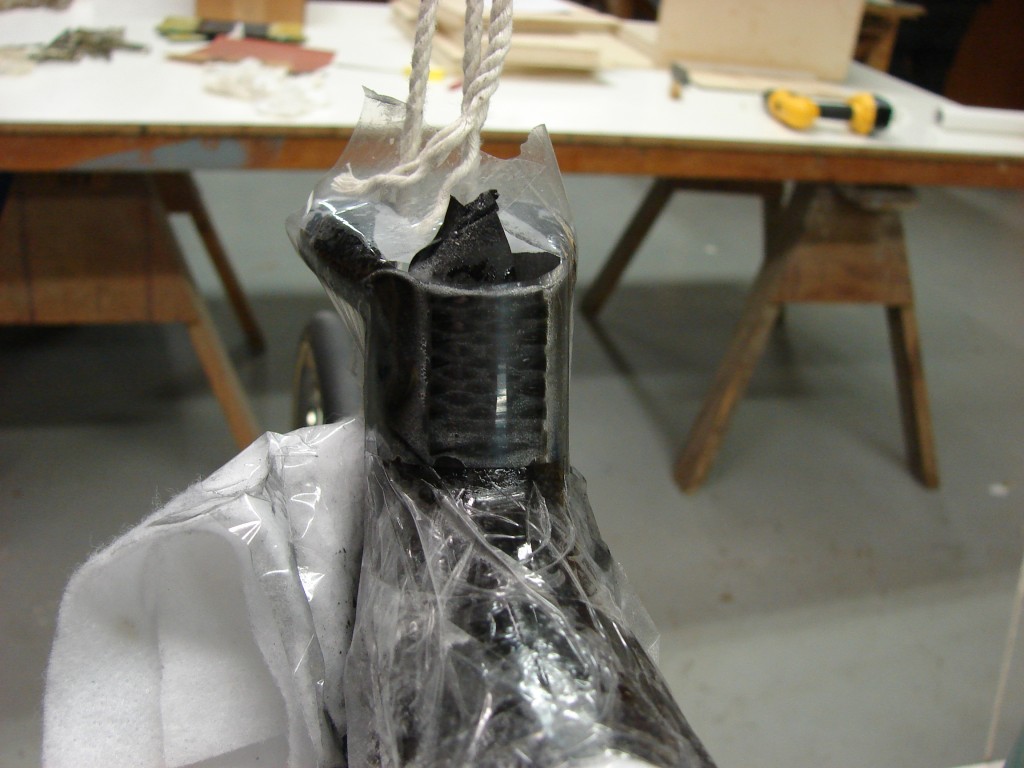 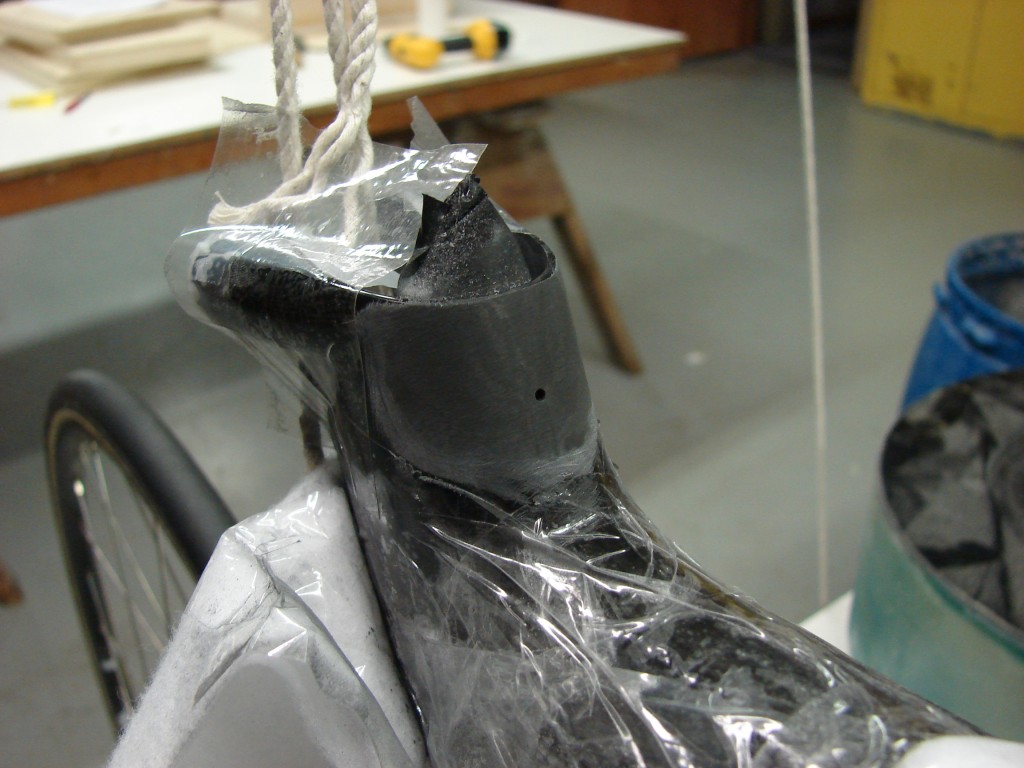 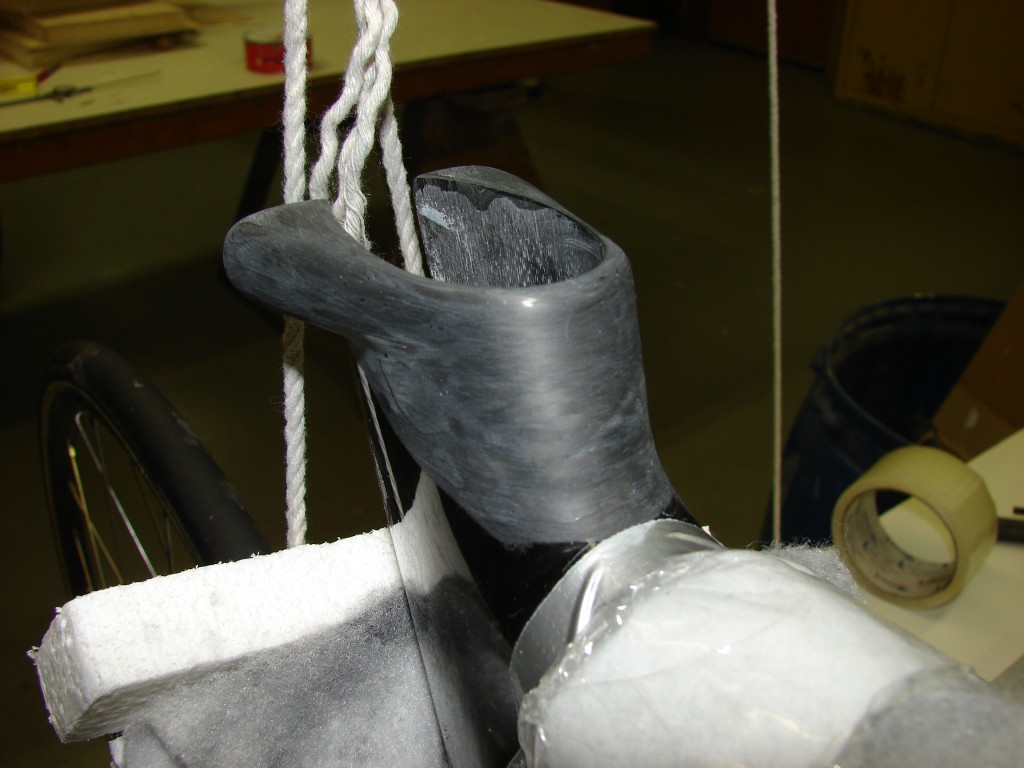 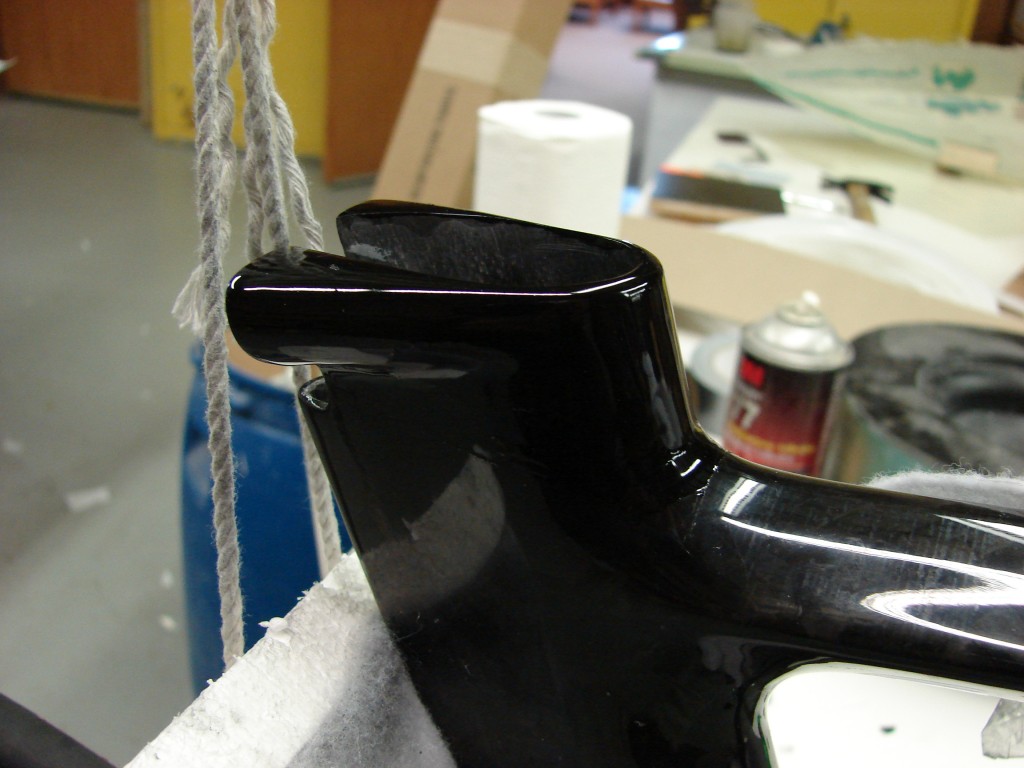 The photo at the top is an example of a frame you would not want to fix, but hang on your wall. I was riding home, a block from my house, and was hit by a minivan whose driver was looking over his left shoulder instead of around the corner where he was going. The frame collapsed under me with fractures at multiple points along each tube. Because this damage goes throughout and was caused by impact, it is highly unlikely that it would be a sound fix.

This is a frame that a friend of mine was riding for a few months. The design of the frame and the fact that he is a bigger guy lead to the bottom bracket shell breaking away from the laminate and causing a crack to form. This is one of the gray areas as the frame is repairable but not worth repairing. If it was a good design, lightweight, or a responsive part I would consider it, but this was one of the worst composite frames I have ever ridden. Bottom line: wall art. 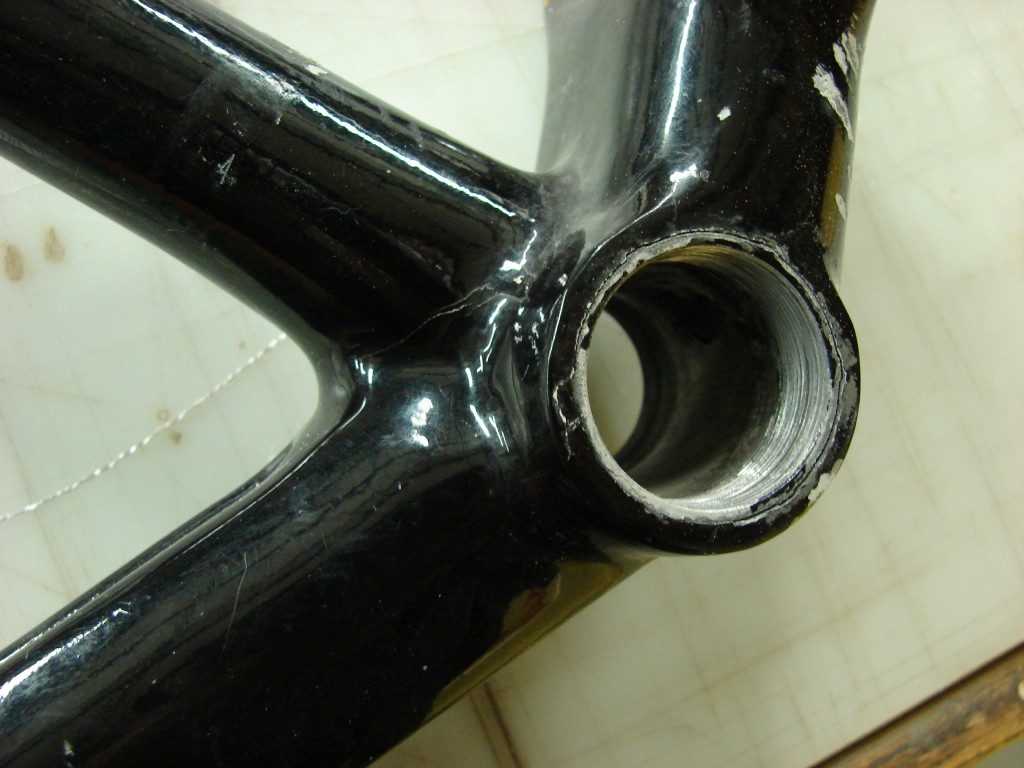