Above: The Biloxi lugger Alligator. Bob usually cruises at 9.5 knots and averages about 3.5 mpg. Alligator turns out to be fast, safe, comfortable, and fun.

About ten years ago my wife, Ching, and I decided we wanted a comfortable, easy-to-handle, cruising boat suitable for exploring shallow coastal areas. We’d missed this when we lived aboard our deep draft sailboat 21 years ago. We looked at a lot of boats and decided that we would try a powerboat this time. We liked the features found on Biloxi Luggers, also known as “Chandeleur Boats,” a type indigenous to the upper Gulf Coast.

However, we didn’t want to own a 30-to-50-year-old wooden boat. Biloxi Luggers aren’t available as production boats and we couldn’t afford to commission a custom design, so we decided to build Alligator ourselves.

We didn’t make this decision without a lot of thought and discussion. I’ve been building boats since before I was a teenager, and I had just finished a 31′ picnic launch prior to starting Alligator. Therefore, I had a good idea of just how massive a project a 55-footer would be. I initially estimated this boat would cost about $175,000 if we made the plain vanilla version. As time went on, Alligator grew to be somewhat more sophisticated than originally planned, and the final material cost was right at a quarter of a million dollars. To put that in perspective, designing and building this boat would involve about ten percent of my lifetime and cost more than my house. That’s a huge commitment for an ordinary couple.

I wanted a boat that would be safe and comfortable for one couple to live on indefinitely, but, most importantly, a boat that would be easy to handle. I spent a lot of time looking at and measuring various Biloxi Luggers since no two are the same. I wanted Alligator to have the flavor and styling of a Lugger, but I wanted to use more contemporary construction techniques in order to reduce both weight and upkeep time. I guess you could call Alligator a modern interpretation of a Biloxi Lugger.

The wide walk-around side decks, large aft deck, low freeboard, and hard awning are design features typical of a Lugger, but the French style transom and yacht-like finish are not. Alligator is a little bit longer, lower, and narrower than a genuine Lugger. Her underbody is different too. Alligator has a seven-panel hull shaped something like a Jersey Seabright Skiff with a box garboard keel. The negative deadrise at the transom gives her a moderate tunnel drive which provides room to swing a 24″-diameter prop protected by a massive keel while only drawing two and a half feet of water. 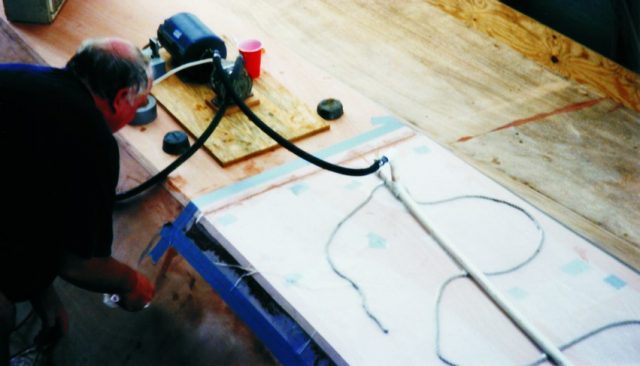 Bob used a cheap surplus vacuum pump, ordinary building supply plastic film for the bag, bubble wrap, a length of old rope to distribute the vacuum, and duct tape to seal the edges of the bag. 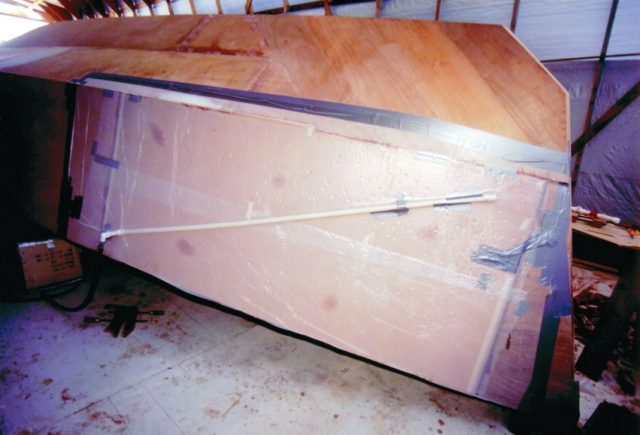 This system worked well and provided good clamping pressure for even the largest panels on our Biloxi lugger.

I made provisions for a powerful, engine-driven hydraulic system that powers the windlass, bow thruster, 4.5 kW electric generator, and high-pressure washdown pump. The single head has a bathtub, freshwater flush toilet, and plenty of elbow room. The one and only stateroom has a real walk-around queen-size bed. Alligator is definitely not a floating hotel. She parties twenty, feeds six, and sleeps two. 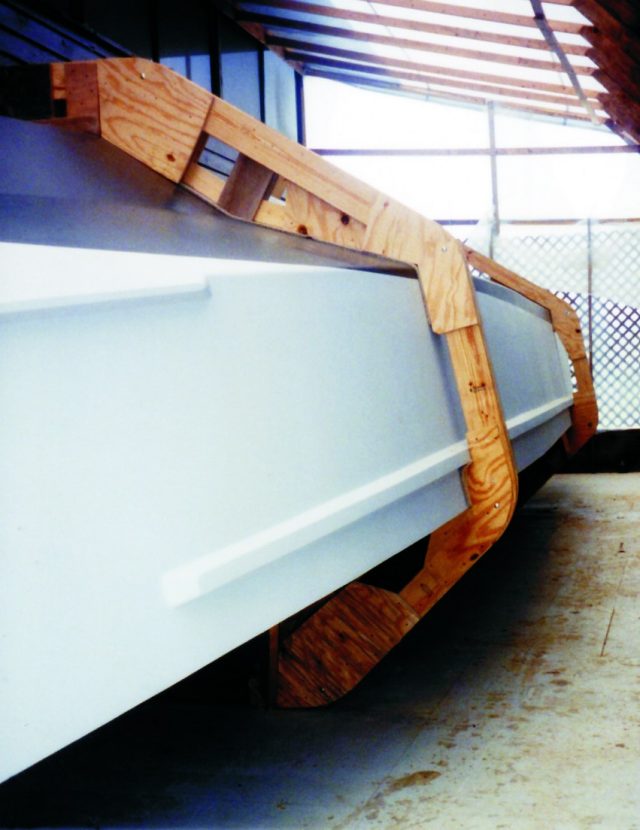 Bob built a set of external rolling frames to roll the Biloxi lugger’s hull over with the help of a friend and some chain hoists.

There is a custom deep freeze, a full-sized clothes washer, and an electric clothes dryer forward of the stateroom. The galley features a household-sized sink and a custom refrigerator/freezer. Alligator even has a special on-deck beer refrigerator, satellite TV with tracking antenna, and room for two hammocks in the shade of the aft deck. Living onboard Alligator is definitely not like camping out.

The pilothouse has all the usual goodies plus a computer navigation system. Electrical needs are taken care of by a small diesel generator supplementing the hydraulic generator and an array of eight solar panels on top of the awning, which generates nearly a thousand watts of DC power. 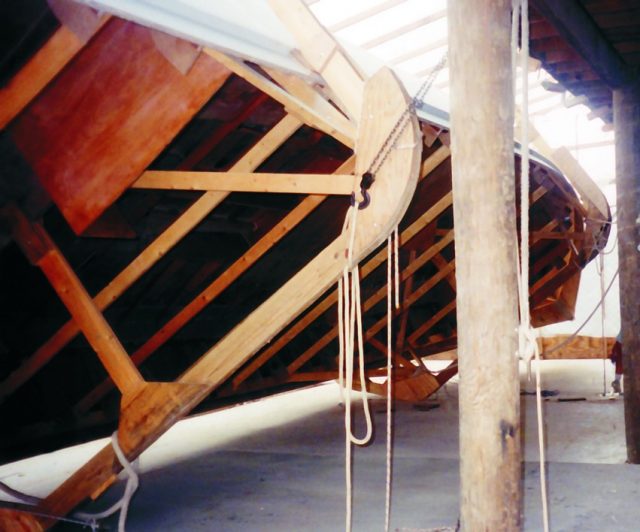 After applying bottom paint and priming the topsides,

A 4.5 liter John Deere marine engine producing 130 hp is coupled to a 2:1 Twin Disk transmission and Aqua Drive (dual CV joint) system. One reason Alligator is so long (and low) is because the machinery spaces are located under the aft deck, accessible via a large hatch which gives plenty of room to do normal engine maintenance and, if necessary, even allow engine removal without removing or cutting any part of the boat. A sealed bulkhead faced with acoustical and thermal insulation keeps noise and odors isolated from the living quarters. Tanks under the cabin sole provide 800 gallons of fresh water and 300 gallons of diesel fuel.

Although I’ve built many boats in my 57 years, Alligator was my first stitch-and-glue (tack-and-tape) boat. I used Ray Clark’s Plyboats software to layout the panels. I started by scarfing together 4′ — 8′ sheets of ½” Okoume plywood. The longest panel was nearly 57′ in length. I assembled the panels right side up inside five female station molds and joined them with three layers of 24 oz knitted bi-directional fiberglass oriented at plus/minus 45°.

After all seven hull panels were joined and the shear clamp and several bulkheads were in place, I built a set of external rolling frames and rolled the hull over with the help of a friend and a pair of chain hoists. Next, I added a second layer of ½” Okoume plywood to the exterior. The second layer was put on in 8′ long sections with 8:1 scarf joints at each end. I had to come up with a suitable method to bend the second layer in place and hold it with adequate clamping pressure while the epoxy cured. Screws would never work because some of the panels required quite a bend and the underlying structure was only a ½” thick. A vacuum bag system was the obvious choice.

My vacuum equipment was not very sophisticated. I used a cheap surplus vacuum pump, ordinary building supply plastic film for the bag, bubble wrap, a length of old rope to distribute the vacuum, and duct tape to seal the edges of the bag.

Even with this rudimentary equipment, I was able to produce amazing clamping forces. Even the largest panels with the most severe curvature pulled into position easily. This system worked well and the good clamping pressure was later confirmed when I cut out holes for the through-hull fittings. The thin epoxy line between the two layers looked just like it was made at the plywood factory.

After preliminary fairing, the hull received a single layer of 8 oz fiberglass cloth. Next, we faired and long-boarded the hull. I applied bottom paint and primed the topsides. Then I made another pair of external frames and turned the hull right side up, again using a pair of chain hoists and the help of a friend. 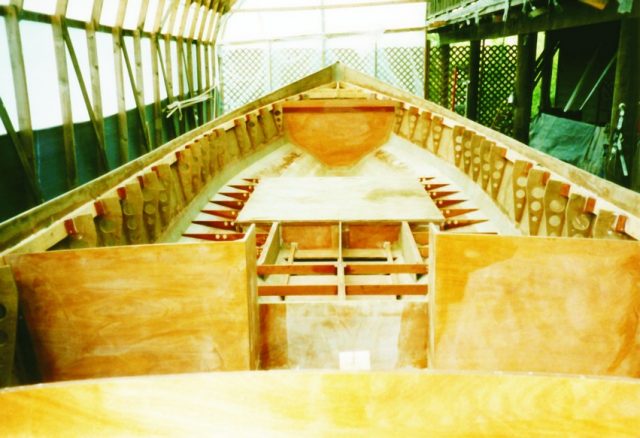 Almost every part in the Bilox lugger is coated with epoxy to protect it from moisture and then joined with epoxy adhesive so that the entire boat, including much of the interior furniture, becomes one very stiff and light unit.

The remaining construction pretty much follows the modern techniques detailed in The Gougeon Brothers on Boat Construction. In other words, almost every part of the boat is coated with epoxy to protect it from moisture and then joined with epoxy adhesive so that the entire boat, including much of the interior furniture, becomes one very stiff and light unit. Alligator weighs about half that of a conventional Biloxi Lugger of the same size. The interior finish is a combination of white epoxy paint and multiple coats of spar varnish. The exterior is done in Awlgrip™.

Alligator took five and half years to build, following six months of work constructing the 30′ — 60′ building shed, which was preceded by a year and a half of spare time design work. With the exception of the manufactured parts and those parts requiring lathe work or forging, my wife and I built essentially every part of the boat. We hired two inexperienced young men to help with the two days of long-boarding and the whole neighborhood turned out for the launching, but, otherwise, we did all the work ourselves.

Was it worth it? In a word, yes. It was a huge and expensive project, but now Alligator is finished and the sacrifices Ching and I made are becoming a dim memory 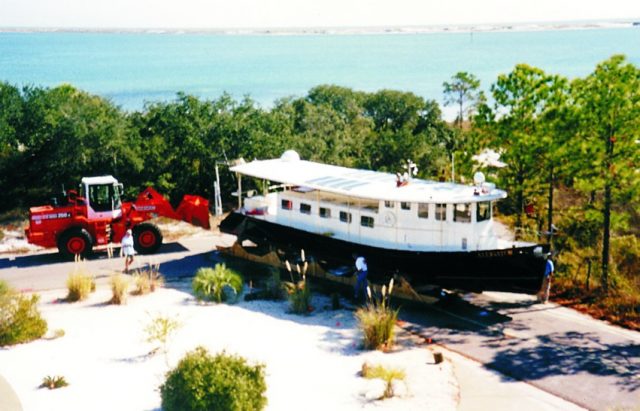 After 5 1/2 years of construction, the Biloxi lugger Alligator is moved, with help of some heavy equipment, from the building shed to her launching site.

Two and a half weeks after launching, we departed on an eight-month cruise to the Bahamas, the Chesapeake, and the Florida Keys. The boat performed flawlessly. Our most serious mechanical failure was the ignition pack on our dinghy outboard. We usually cruise at 9½ knots and average around 3½ miles per gallon. Alligator has turned out to be fast, safe, comfortable, and fun.

A boat like Alligator is an enormous undertaking. The demand for Biloxi luggers is bound to be small, so I don’t anticipate publishing plans suitable for amateur builders in spite of the fact that she is the perfect boat for us. However, she gets enthusiastic reviews wherever we take her, and many people have asked how they could buy a copy of Alligator. For that reason, I might entertain working with an established custom builder if a particular client wanted such a boat. Are there enough folks out there who would appreciate this design so that a production boat builder might be interested? I wonder.