Cover Photo: Carl Puehl’s FIFTY PLUS, a modification of the Ted Brewer design, Quite Times.

A 37′ powerboat is a bit of a luxury for a self-employed handyman and jack-of-all-trades like Carl Puehl. But he’d always wanted to build a boat, and he decided to fill the gap between what he wanted and what he could afford. 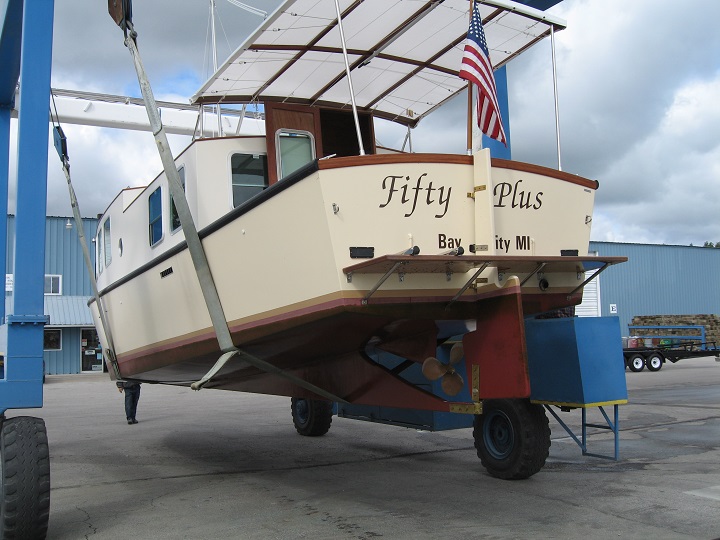 Fifty Plus is pulled from the water after her second season. The arc bottom and skeg are inspected after a quick power wash and she is ready for winter storage.

What he wanted was Ted Brewer’s design #244, Quiet Times. It sparked Puehl’s imagination when he saw it featured in The Boatbuilder magazine. He studied the design and said, “I can do that.” Puehl saved that issue of The Boatbuilder and started thinking about how he could make Quiet Times a reality.

He already owned an aging powerboat. Unfortunately, it burned fuel at the impractical rate of 23 gallons per hour. Motoring up to Tawas, a resort town on Lake Huron about 80 miles from his home in Saginaw, Michigan, cost him $400 in gas alone. With an eye toward retiring from working sixty-hour weeks, he yearned for a boat he could afford to take out on the water frequently during Michigan’s temperate months. His other criteria were that the boat be comfortable, reliable, and have a low environmental impact.

Puehl ordered the plans and started modifying the boat’s design with Ted Brewer’s approval. He said Brewer was very accessible, just a phone call away when Puehl needed to ask him about making design changes.

As designed, Quiet Times is a 34′, long-range inland waters cruiser with a sharpie-type plywood hull and a skeg rather than a keel. The interior design is generous enough for a couple to live aboard and can be built to accommodate either inboard or outboard power.

Brewer designed the craft to be an economical and easily built displacement cruiser for the conservative yachtsman to explore North America’s numerous inland rivers and lakes. In many ways, this makes it the perfect yacht for a Great Lakes boater like Puehl. 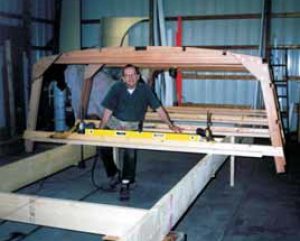 Puehl pauses after completing the first few mahogany frames in the spring of 2002—the beginning of what would be a five-year-long project. 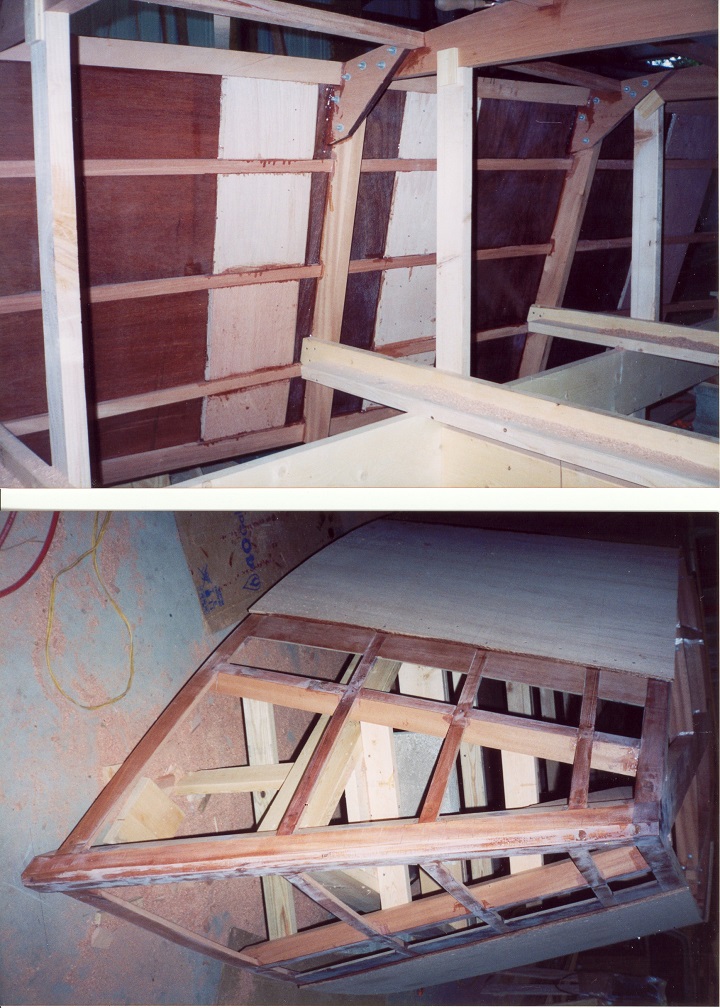 The hull frames and stringers are completed. The hull’s port side ½” plywood sheathing is installed with 12″ wide butt blocks between the stringers. 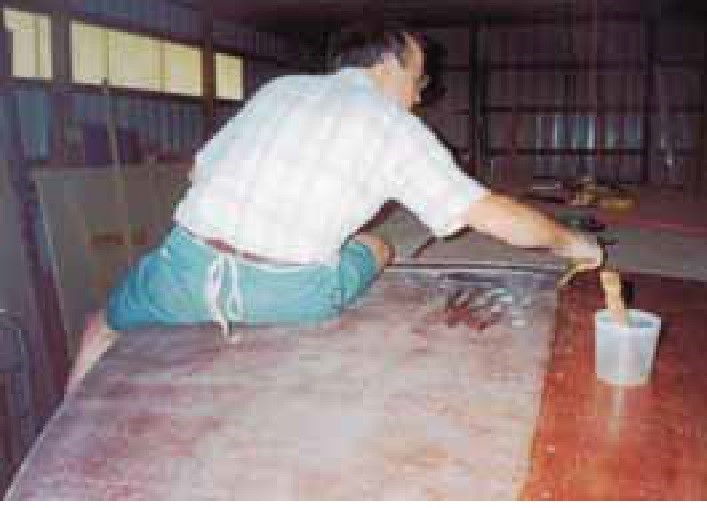 Puehl applies the last of three layers of ¼” plywood to the bottom before adding a layer of 6 oz fiberglass cloth to the hull’s exterior.

Brewer gave Quiet Times classic 1920’s styling to attract positive attention and prevent it from becoming dated. The design employs marine plywood on sawn framing. All is fastened with epoxy, bronze screws, and barb nails. She has a strong arc bottom that is as easy to build as a flat bottom.

In addition to being spacious enough for a live-aboard couple, there is room for occasional guests as well. The boat offers plenty of storage throughout, and the aft cabin is large enough to accommodate a good-sized dinghy.

Puehl stretched the design from its original 34′ to 37′, spreading the additional three feet over the length of the boat, because, he jokes, “at 34′ it would be for short people, and I have long feet.”

Brewer designed Quiet Times to offer maximum fuel efficiency with either an inboard diesel of 25 to 40 horsepower or twin 4-stroke outboard motors. She has a prismatic coefficient of .642, perfect for running at 8 or 9 knots at moderate throttle.

Puehl chose a 24-horsepower Bukh diesel. The shiny red engine was air-freighted from Denmark to Puehl’s front door for only $500 in shipping. 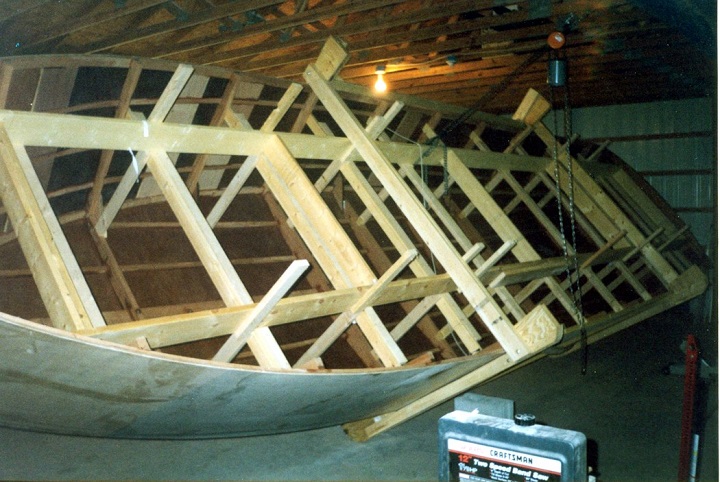 In November of 2002, using an ingenious tackle arrangement, Puehl turned the hull over to begin working on the topsides. 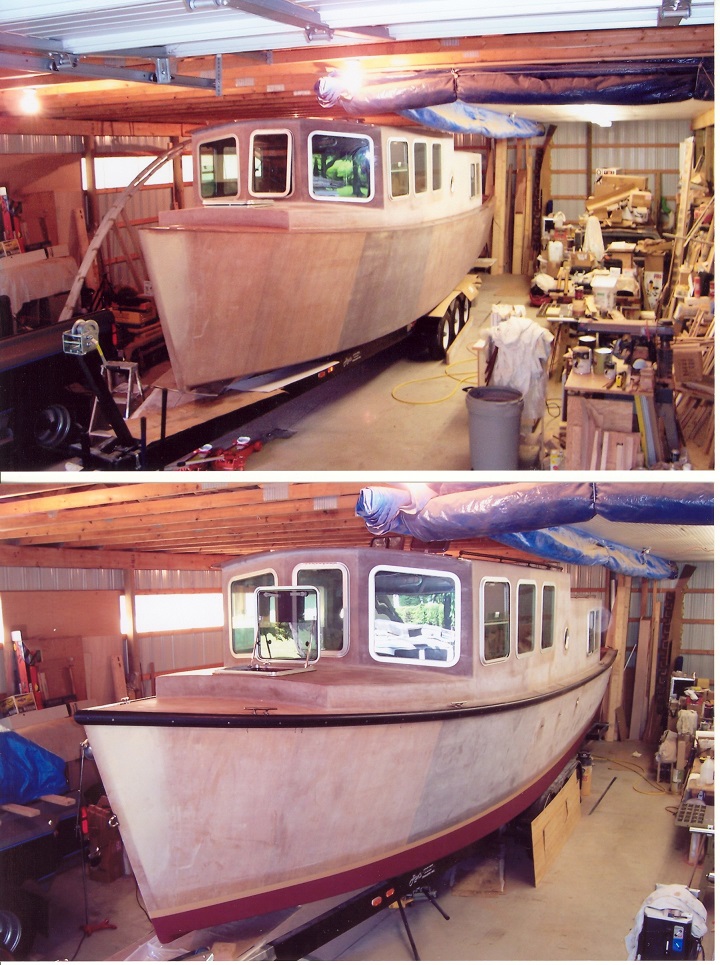 The deck of Fifty Plus is completed and the cabin sides take shape. The deck is two layers of ¼” plywood, the sides, one layer of ½ plywood. In 2003, the engine installation was also completed.

He raves about the Bukh’s mileage: it burns a mere 3 quarts of diesel fuel per hour compared to the 25 gallons per hour of regular gas the average 37′ powerboat can be expected to guzzle.

In two seasons, he’s put 2,700 miles on the craft and reports the boat has averaged 9 miles per gallon.

Brewer’s design features an open bow cockpit and an enclosed aft cabin. Puehl flipped this arrangement, leaving the aft cabin open and enclosing the bow cockpit to create a cuddy cabin guest berth. He said he did so “for reasons anyone familiar with the Great Lakes would readily grasp.”

Indeed, on the often choppy waters of Lake Huron, an open bow cockpit might provide an inhospitable environment in all but the best of weather.

He trimmed the bow cabin with a warm, almost glowing, unidentified (possibly gum, he said) wood salvaged from the Sixties-style living room walls of a home he’d helped remodel. He said he’d had the wood for years and always knew he’d use it for something special.

The rest of the interior is bright-finished mahogany and all wood is encapsulated in WEST SYSTEM® Epoxy. The modified open rear cockpit creates a generous platform perfect for fishing, grilling, and sunbathing.

Puehl meticulously recorded each step of the construction process with photographs. The earliest shows him posed with the first boards of mahogany shipped to his home. In total, he used 60 4×8 sheets of Philippine mahogany plywood, ¼”, ½”, and ¾” thick. The bottom is constructed of three layers of five-ply mahogany, and the hull is protected by 15 mils of epoxy on 6 oz fiberglass on the outside.

Alone in the pole barn behind his modest, Puehl worked doggedly for five years, putting in an estimated 5,000 hours—in addition to working 60-hour weeks—to complete the trawler he would christen Fifty Plus. The only outside assistance came from a friend who helped him to machine and weld the rudder and driveshaft.

Building a boat this size is “grueling work,” he said. Fifty gallons of WEST SYSTEM epoxy went into the construction. The resulting craft is incredibly solid.

“This boat doesn’t squeak,” Puehl said. “It’s a monocoque structure, like an airplane. You hear stuff crashing around (under heavy weather), but no squeaking. The bulkheads are all glued in. It’s extremely rigid.”

He said he was most surprised that even when Fifty Plus is pulled out of the water on a boatlift, she doesn’t groan or creak as most large vessels do.

Puehl had a fifth-wheel trailer custom-made for Fifty Plus, and he stores the boat in his pole barn. Because of this arrangement, the boat doesn’t need antifouling paint. The hull is instead coated with Graham Ceramic™ house paint. He finds the ceramic paint easy to keep clean with a scrunge pad.

Comfortable accommodations were important to Puehl. He put a lot of thought and attention into the interior details. He sewed all seat and berth cushions himself on a quilting machine. They are expertly made and covered in a soft, stain-resistant microfiber fabric.

He also made all the window treatments of mildew-resistant lawn chair canvas he bought on sale at a fabric store. He designed them to attach with Velcro, negating the need to install curtain hardware.

One nifty custom feature is the custom-shaped sink Puehl constructed for the head. He made it out of wood encapsulated in epoxy. The seams are joined with fillets.

The boat has “great livability,” he said. The autopilot, when set to about seven miles per hour, allows him to wander around the boat once he’s out in open water.

The gauges he ordered came with a 9′ wiring harness, which was 17′ shy of the 28′ the wiring needed to travel. Fortunately, as a licensed electrician, Puehl was equipped to rebuild the harness with fatter wire to go the full distance from the cockpit to the engine. 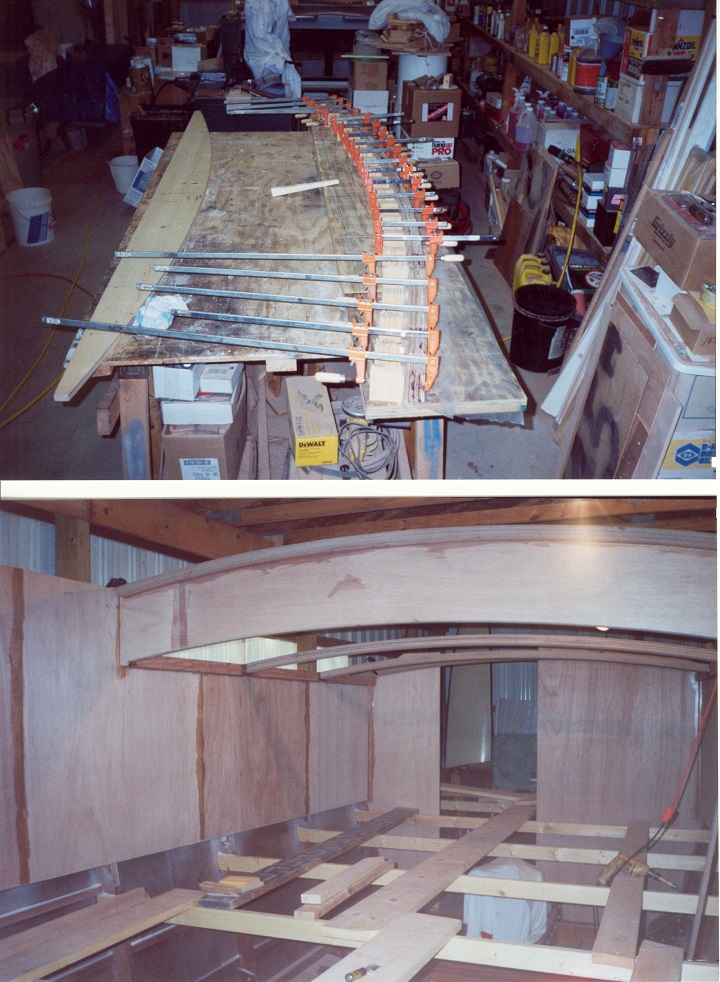 Puehl laminated the deck and cabin roof beams in a custom jig. The jig produced beams in an arc with a 21′ radius.

Some of the environmentally friendly and economical finishing touches he put on Fifty Plus include a high-efficiency refrigerator, which he insulated, and incandescent-corrected fluorescent lights to illuminate the interior. A pair of 6-volt golf cart batteries supplies all of the boat’s electrical power.

One of Puehl’s proudest moments came when his insurance company’s marine surveyor inspected the boat and awarded it an “A” rating.

The boat was launched in 2006 at Bay Harbor Marina in Bay City, Michigan. Puehl’s children came to the event and helped him christen Fifty Plus with a bottle of Asti Spumanti.

Puehl’s advice for would-be boat builders: “If you don’t like sanding, don’t build a boat.” 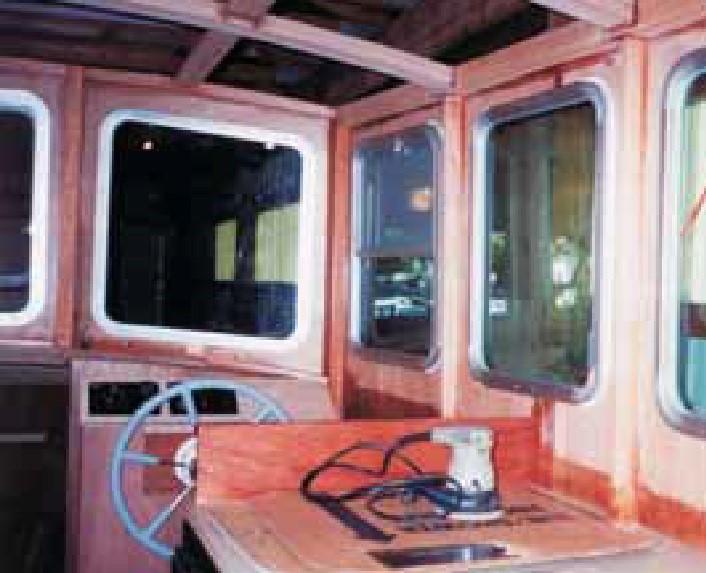 Fifty Plus’s windows and hatches are installed and building of the interior cabinetry is well underway. 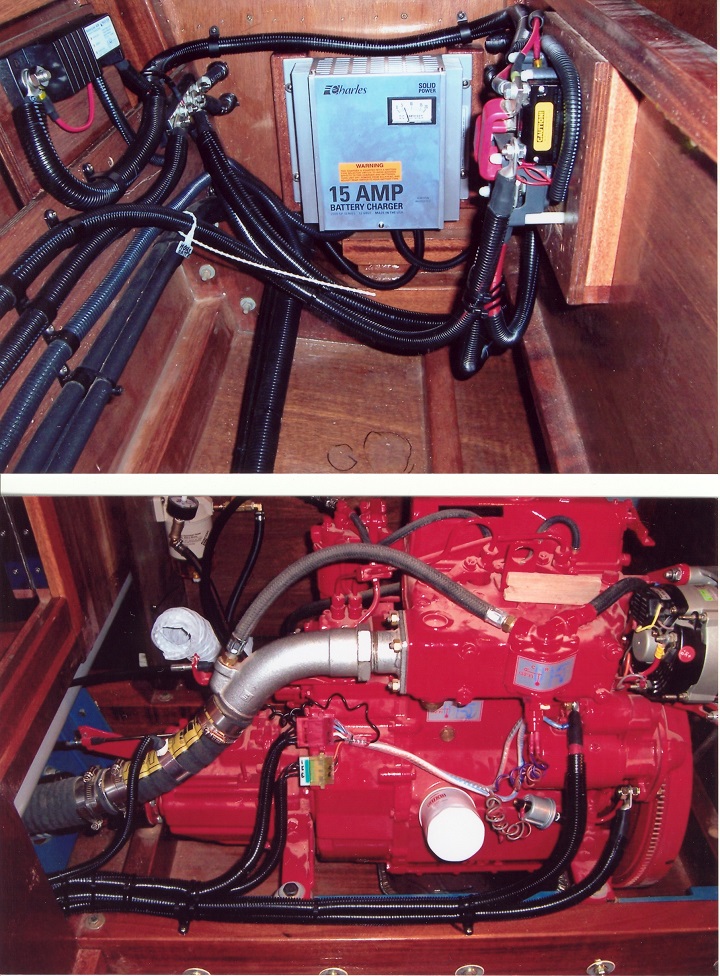 Puehl’s meticulous nature is evident in the detail of his electrical and plumbing systems. 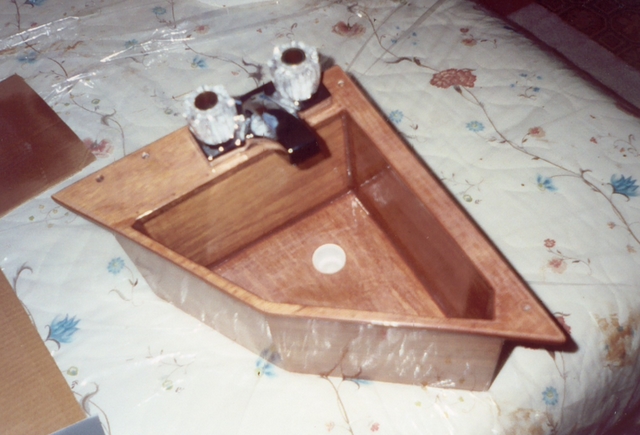 A custom-shaped sink fits a tight spot in the head of FIfty Plus. The seams of the plywood sink are joined with fillets and it is encapsulated in epoxy. 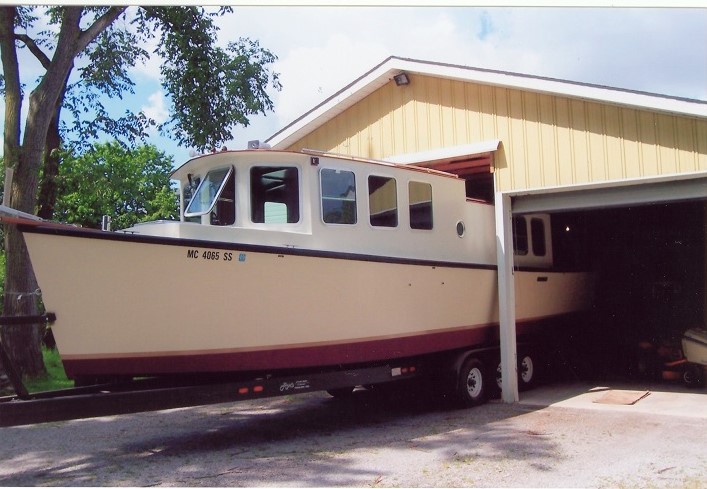 In the spring of 2006, the nearly finished Fifty Plus is unveiled. Everything is complete except the painting of the cabin roof, which was finally completed outside of the confines of the pole barn. 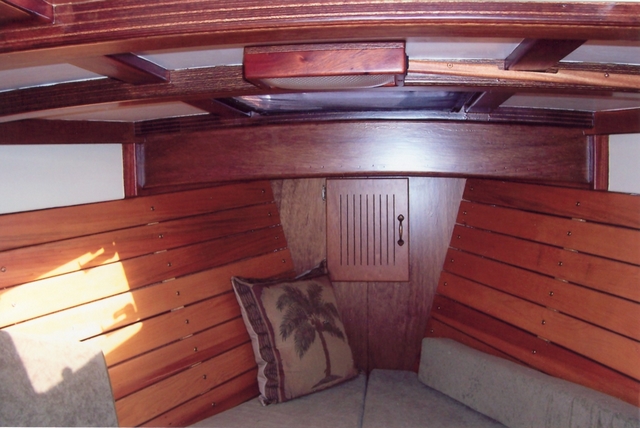 The open cockpit of the original Ted Brewer design was replaced with a cozy V-berth on Fifty Plus.