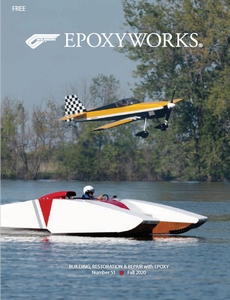 My good friend and previous employer, Jon Staudacher, always surprises me with how he designs and builds his projects. Jon creates everything from hydroplanes to airplanes using materials and methods that are logical and practical. He would say he treats most of the things he builds like a science project, experimenting with new concepts in design and materials, and continually learning new things. I will explain some of Jon’s unique approaches to a few of his recent projects. END_OF_DOCUMENT_TOKEN_TO_BE_REPLACED

On June 20, 1979, while sailing in a qualifying race for the OSTAR (Original Single-Handed Transatlantic Race), Jan Gougeon’s self-designed and built 31′ trimaran FLICKA was capsized by heavy seas in the North Atlantic. Jan survived on the overturned plywood/epoxy multihull for four days before he was rescued by a passing freighter. The following is the second half of a transcript of a phone call between Jan, his brothers Meade and Joel, as well as fellow multihull designer/sailor Mike Zuteck. Their discussion takes place on June 26, 1979, just hours after the freighter that rescued Jan delivered him to dry land. Part 1 of this conversation can be found here. END_OF_DOCUMENT_TOKEN_TO_BE_REPLACED

On Wednesday, June 20, 1979, while sailing in a qualifying race for the OSTAR (Observer Single-Handed Transatlantic Race, originally named after its first sponsor, the British Observer newspaper1), Jan Gougeon’s self-designed and built 31’ trimaran FLICKA was capsized by heavy seas in the North Atlantic. Jan survived on the overturned plywood/epoxy multihull for four days before he was rescued by a passing freighter. The following is the transcript of a phone call between Jan, his brothers Meade and Joel, as well as fellow multihull designer/sailor Mike Zuteck. Their discussion takes place on June 26, 1979, just hours after the freighter that rescued Jan from FLICKA and delivered him to dry land. END_OF_DOCUMENT_TOKEN_TO_BE_REPLACED

A pair of Gougeon-built multihulls made with WEST SYSTEM Epoxy decades ago won important races on the Pacific Ocean and Great Lakes in 2018.

Incognito is a G32 catamaran, vacuum bagged composite construction, by Gougeon Manufacturing in 1990. Russell Brown of PT Watercraft in Port Townsend, Washington raced the 28-year-old vessel singlehandedly in the grueling R2AK (Race to Alaska). In the qualifying leg from Port Townsend, WA to Victoria, BC he finished 40 minutes ahead of the rest of the fleet. He then led the race for three days until fatigue set in, requiring him to put finishing safely first. Still, he was the first solo finisher for the second year in a row and knocked more than 24 hours off his record-breaking 2017 win, also aboard Incognito. END_OF_DOCUMENT_TOKEN_TO_BE_REPLACED 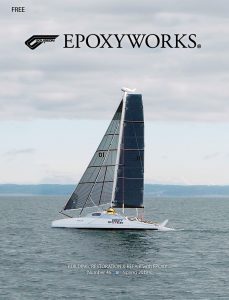 The work of the Gougeon brothers has been like a guiding light to me starting when I was a young teenager. It wasn’t just the methods and skills they developed that inspired me (and led to my career in boatbuilding), it was the “outside the box” thinking about boat design they employed. While Meade Gougeon led the effort to develop and teach epoxy skills and building methods, it was his brother Jan who had the courage to design, build, develop, and race boats that were very unusual and often counter-intuitive, yet very successful. Jan’s G-32 catamaran is an example of his genius. END_OF_DOCUMENT_TOKEN_TO_BE_REPLACED

Adagio, our beloved trimaran, was designed and built by Meade and Jan Gougeon in 1969 and launched in the summer of 1970. After undergoing a minor refit this past winter, she still has what it takes to win. We’re extremely proud that Adagio placed first in the multihull division of 2016 Bell’s Beer Bayview Mackinac Race, which spans almost 300 miles of often treacherous Great Lakes. END_OF_DOCUMENT_TOKEN_TO_BE_REPLACED

When Jan Gougeon built Strings in 2010 one of the most interesting features he included, at least from my point of view, was the float that goes on top of the mast. Due to its zeppelin-like shape, this is also called a blimp or a dirigible. The purpose of the float is to make the boat self-rescuing: if the boat tips, the float prevents it from going any farther than lying on its side. The mast and float are then used to right the boat. Jan developed this system when designing the Gougeon-32 back in the late ’80s, so he thought it would work for Strings. END_OF_DOCUMENT_TOKEN_TO_BE_REPLACED

A skiff is a shallow, open boat with a sharp bow and square stern. After building some skiffs of various designs and having the opportunity to observe them over time, I have found details that have worked nicely that might be a value to others. END_OF_DOCUMENT_TOKEN_TO_BE_REPLACED

Strings, as unique as the man who designed it, continues to be a work in progress for us at GBI. In Jan Gougeon’s first year of sailing Strings, he noticed the boat felt sticky at times. He thought it might be the centerboards jibing too much and the solution might be locking them straight. The center boards work as jibing boards by having two high spots on each side of a centerboard head creating the pivot point to get the boards to change angle, or jibe. The actual pressure from the boat going through the water and wanting to slide sideways gets the boards to jibe. END_OF_DOCUMENT_TOKEN_TO_BE_REPLACED

Most seasoned sailors would agree that a clean bottom leads to faster sailing. Sometimes it may be necessary to do more than scrub away the algae and zebra mussels, though. In the case of Adagio, 44 years of sailing was starting to ripple the bottom of the boat. Simply put, it was time to fair the bottom. While fairing the bottom of your boat may seem beyond your reach, it is a project that novices and experienced boaters alike can accomplish with a few simple tools and a love of a little manual labor. END_OF_DOCUMENT_TOKEN_TO_BE_REPLACED