Many of us at Gougeon Brothers experiment with WEST SYSTEM® products on personal projects at home as well as at work. We often push products and techniques beyond the limits recommended in our literature. Sometimes the experiment fails, sometimes we discover something very useful.

Installing ceramic tile
Grant Urband, head of our marketing department, developed an interesting approach for using G/5 Adhesive during an interior restoration project on his Victorian era home. He recently used G/5 to glue hundreds of 1″ square ceramic tiles to a large surface and in the process, came up with a unique method for using the fast-curing adhesive.

Any time you must continually repeat a process, it is worth developing techniques that improve your efficiency. Grant knew that he would have to use small batches for this project because of G/5’s short working time. After experimenting with several batches, he discovered that G/5 resin and hardener can be dispensed into small mixing cups ahead of time and will remain uncured until mixed. 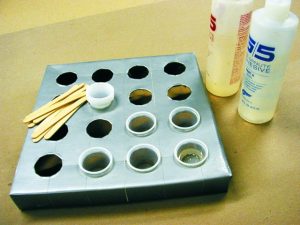 He made a carrying pallet with sixteen holes, sized to hold 1-ounce mixing cups (pill cups purchased at a food service outlet). The pallet was covered with duct tape so glue drips could be peeled away.

He arranged all of his materials close at hand. 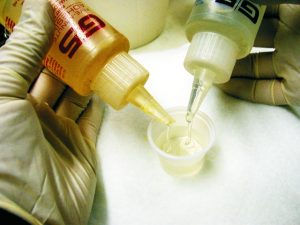 Once Grant’s project was underway, he was able to quickly mix new batches and work continuously without stopping to dispense resin and hardener.

Plastic repair with G/5 Adhesive
I occasionally use my tools on jobs for which they were not intended. I won’t go into detail, but it was on one of those occasions that I significantly damaged my ratcheting “squeeze driver” screwdriver. The plastic that surrounded the thrust bearing had broken into several pieces. I didn’t know if it could be repaired but I was going to give it a try.

I decided to use G/5 Adhesive for this repair, since it adheres quite well to a number of plastics. I planned to incorporate 4-oz fiberglass cloth to reinforce the area around the thrust bearing after gluing the pieces together.

These are the basic steps I used: 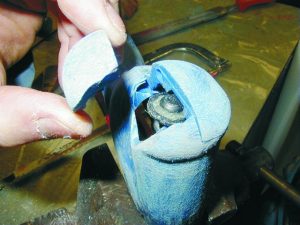 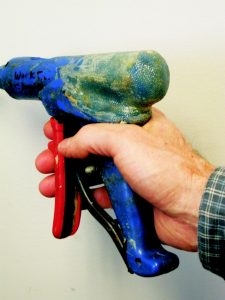 I guess you can say the repair was successful. It’s been a year and a half and my “squeeze driver” works fine (right photo). I think it is stronger now than when it was new. It may even work on jobs for which it wasn’t originally intended.