In preparation for a thorough Coast Guard inspection, we’d stripped the masts, booms, and gaffs on the schooners Appledore IV and V of paint and varnish. This revealed several small rot areas, wear, and damage. Two of the gaff jaws (also called gaff saddles) had significant damage, including cracks in the jaws themselves, probably due to hard jibes and insufficient repairs. Gaffs are the angled spars from which the sails are hung.

The Coast Guard inspector was satisfied with our plan to remove the rotted area from the gaffs, scarf in a “Dutchman” (beveled woodblock), and repair the minor damaged areas. The Coast Guard requested we document all repairs and use WEST SYSTEM® G/flex® Epoxy. They prefer rubber-toughened G/flex on wooden spars because of its flexibility relative to traditional marine epoxies. 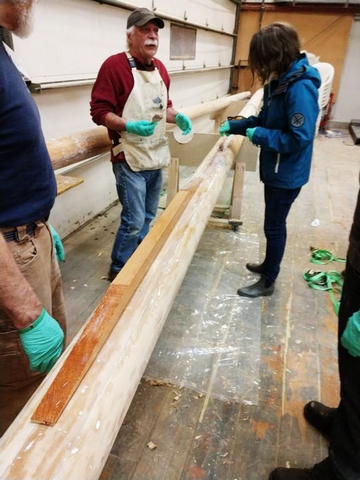 Author Bill Bauer the gaff repair. The dutchman is laying on top of the pole while the cavity is being prepared with epoxy.

The gaff jaws were a different story. The Coast Guard asked that we replace the damaged jaws. On the two gaffs, half of a jaw was damaged. Each damaged half was a 5′ x 8″ x 6″ solid piece of elm. Finding two pieces of elm today would be hard and cost-prohibitive. We decided to laminate with white ash instead. Ash is hard and able to take the shock of an impact but can split easily along the grain. 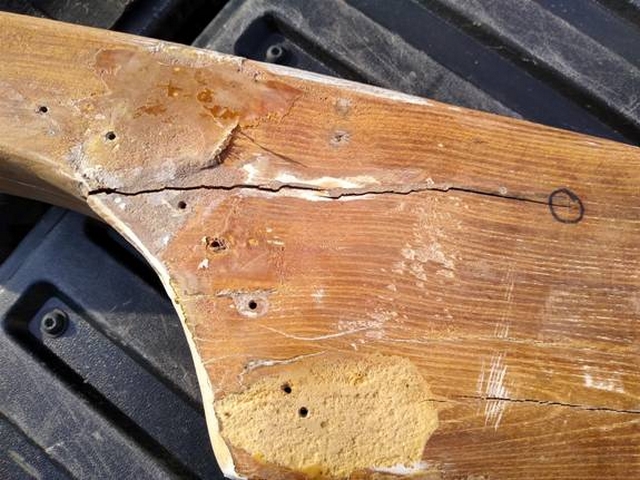 Half of one of the gaff jaws where the wood is splitting.

To reduce the chance of splitting, the center two sections of the laminate would be laid up at opposing 23-degree angles.

Due to the complexity of the assembly, we broke it up into three groups (see the illustration above). We epoxied the A, B, and C groupings separately as follows:

The schematics used for laying up the new jaws. Note the offset angle of the grain in the lamination to add strength and stability to the jaws

After epoxying, a power plane and belt sander were used for the final shaping of the gaff jaw.

We strapped the new jaw to the gaff to measure spacing, made some adjustments, then bedded and through-bolted it to the gaff. 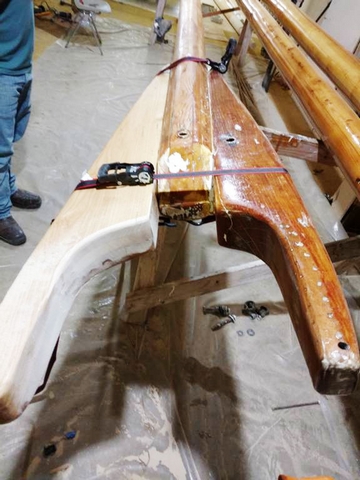 Editor’s note: Bill Bauer teaches boatbuilding and volunteers with BaySail, a non-profit organization founded in 1998 and based in Bay City, Michigan. Their tall ships, Appledore IV and Appledore V, are the fourth and fifth in a series of six steel-hulled gaff-rigged schooners commissioned by Herb and Doris Smith, designed by Russ Wooden and Parker Marean, and built by Treworgy Yachts in Palm Coast, Fla. The ships were built in 1989 and 1992, respectively.