I have just about finished restoring a Gougeon Tornado catamaran. I’ve always had and loved catamarans, and this one had been sitting out in the sun at the Oklahoma City Boat Club for years. Bob, a fellow club member, offered some parts. His plans were to “chainsaw the hulls tomorrow” and put the pieces in the club Dumpster. That was the push I needed. In a moment of insanity, I told him there was no way I could let him do that.

I knew that boat needed some TLC, and I loved the idea of taking on the project—just not now. Would I ever find the time? It turned out Bob was only looking for a trailer to haul his lawnmower. I probably saved him $1,000 in getting the custom tilt trailer converted. He took my check, went to Lowe’s®, and was ready to go the same day. I promised my wife Julie I would finish the boat and then find a buyer who would appreciate it. We already had too many boats and didn’t have a place to store the Gougeon Tornado catamaran out of the sun. 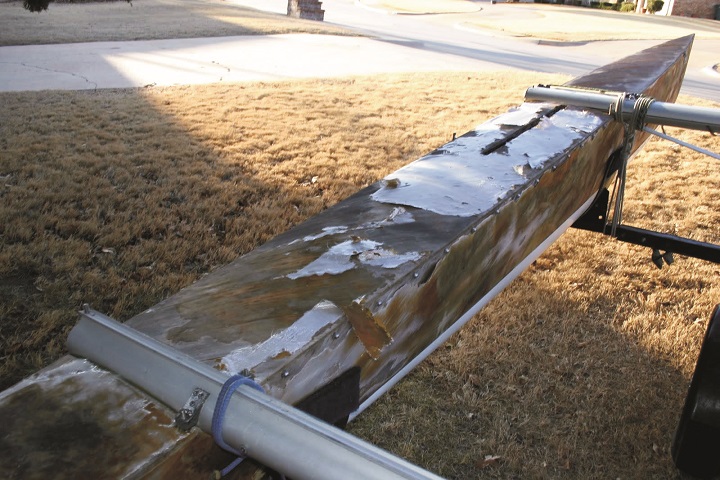 The sad shape of the Gougeon Tornado catamaran’s hulls when they were rescued from the chainsaw. 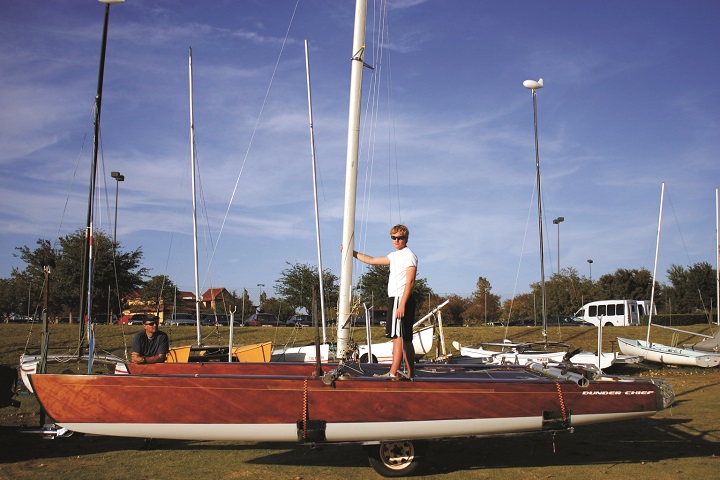 The author and his restored Gougeon Tornado catamaran.

I figured all I had to do was purchase sandpaper and some WEST SYSTEM® Epoxy, and in a few months, I’d have her in the water. Well, as with most things in my life, I have a tendency to underestimate my timelines—at least according to my wife Julie. After a long conversation with the guys at WEST SYSTEM, it dawned on me that restoring a wooden boat is a little more involved than buffing out some oxidized gelcoat. It has been just about two years, but I am finally ready to take her out for a sail.

I had some incredible luck in finishing her. In Wichita, Kansas, there is a guy who used to manufacture Tornadoes back in the ’70s and still has molds and various parts lying around. In his parts bin, he found a set of rudder castings that could be modified to fit the original wooden blades. He also had some great old stories of going to the race trials back in 1975 with a crew who fell in love with the eight Gougeon-built Tornado cats that were there. Six months later, he acquired one, which is very likely the boat I now have. Stu Bernd pitched in a couple of sets of sails lying around his place, and Jay and Pease Glaser were nice enough to send out some standing rigging.

The restored Tornado cat turned out so sweet that Julie is trying to convince me to keep it. Imagine that! I knew there was a reason I married her. Only once did she ask me, “How much more of that epoxy are you going to buy?”

Now I need to add on to the garage so I can fit the boat in it. Should have that done in about two weeks.

This article originally appeared on SailingAnarchy.com, in December 2010. Published here with permission of Sailing Anarchy.