A Bruce King designed 124′ sloop is taking shape* at Hodgdon Yachts, Inc. in East Boothbay, Maine. It is the largest boat ever built at Hodgdon and one of the largest wood/epoxy yachts ever built.

Even at this stage of construction she is impressive. At first glance, craftsmen fairing her keel appear to be riding the back of a breaching leviathan.

The 3″ thick cold-molded hull consists of four double-diagonal layers of 3/8″ cedar between two 3/4″ layers of mahogany laminated with WEST SYSTEM® epoxy. Fairing is nearly completed and the hull will soon be covered in two layers of biaxial cloth laminated with PRO-SET® epoxy and post cured.

After the glass skin is applied and postcured, “rolling frames” will be built over the hull to rotate it in place for installation of the 52-ton keel and finishing of the decks and interior.

The carbon composite mast will stand 172′ off the water and carry 6,761 square feet of sail. Auxiliary power will be furnished by a 550 hp Lugger diesel and a 75 hp bow thruster. She will draw 9′ 9″ with the hydraulically operated centerboard up and 26′ 6″ with it down. (Over 250 gallons of epoxy went into the glass composite centerboard trunk.) Cherry joinery will be prominent throughout the interior and the salon will feature a marble fireplace and a pipe organ.

At 350,000 pounds, the finished yacht will be too heavy to be moved on conventional tires. She’ll be skidded the several hundred yards to the launch site (cover background) on plastic runners. She will be christened ANTONISA when completed in 1999.

*This article was originally published in Spring of 1997. Click the ANTONISA tag for more articles about this yacht and photos taken after completion. 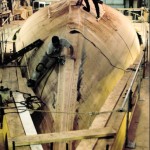 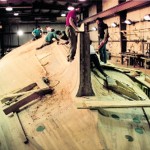 The cold-molded mahogany and cedar hull takes up nearly all of the Hodgdon shop in East Boothbay Maine. Only the lower portion of the hull is visible above the 11′ tall scaffolding. 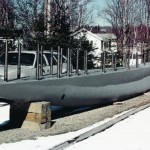 The 43′ long, 105,000 lb lead keel awaiting installation. It’s deceptively small considering that it weighs about 50 times more than the station wagon parked next to it. The keel bolt alone way more than a ton. 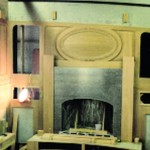 The joinery around what will be a marble fireplace. Much of the interior was prefabricated. 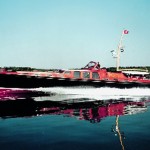 A previous Hodgdon project was the 79′ commuter LIBERTY, also a Bruce King design. Completed in 1996, she was Maine’s Boat of the Year.