Photo above: IRYS Students splash the Herreschoff 12.5 they restored during the school term on launch day. Image courtesy of IYRS.

If you travel to the campus of the International Yacht Restoration School, you might think you are walking into the past. The staff offices are inside a restored 1831 mill building. Students restore wooden boats from the 19th and 20th centuries while learning plank-on-frame construction inside a cavernous building from 1903. And hanging off the IYRS docks are majestic classics from a bygone era.

But surface appearances are deceiving. This Newport, Rhode Island school looks forward. The IYRS trains craftsmen for today’s marine industry while continually developing their programs to keep up abreast of the skills needed in the modern marketplace. 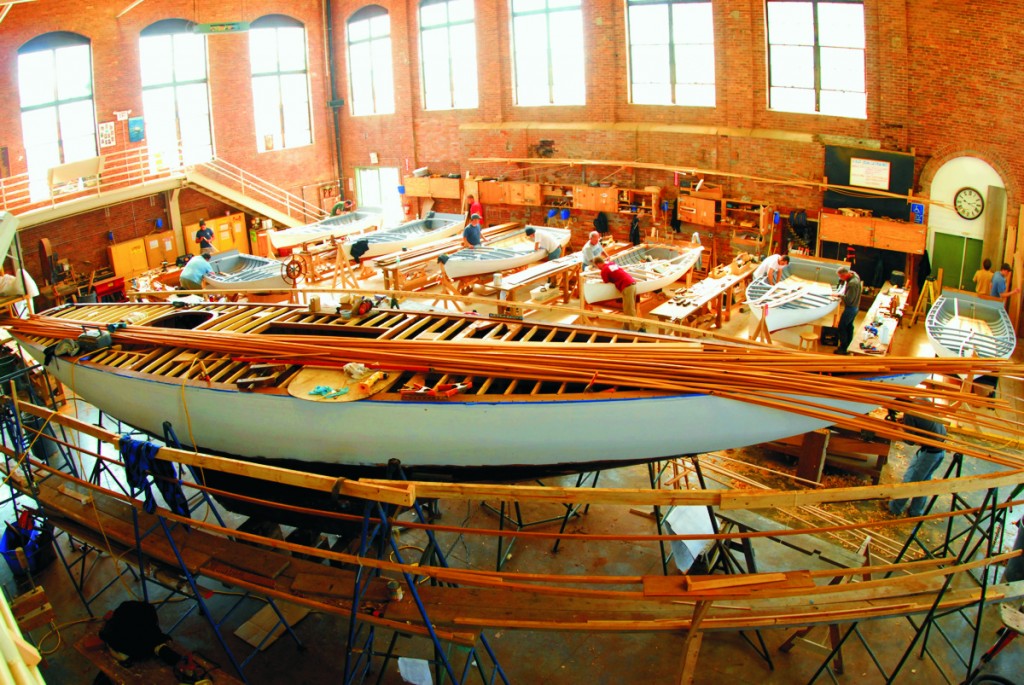 An overview of Restoration Hall, originally built in 1903 as an electricity plant. A 6-Metre restored by second-year IYRS students is in the foreground. Photo by Caitlin Wood

To develop new programs, the IYRS canvasses industry partners to learn about their workforce needs and coordinates with organizations such as the Rhode Island Marine Trades Association and the American Boat & Yacht Council (ABYC). This has helped them to develop a family of programs, using their core two-year program in Boatbuilding & Restoration as a successful model.

Beginning in 2004, IYRS added evening and weekend professional development courses. In 2006 they added a nine-month Marine Systems program that teaches students to install, maintain, and troubleshoot onboard systems and trains them to sit for the relevant ABYC certifications. 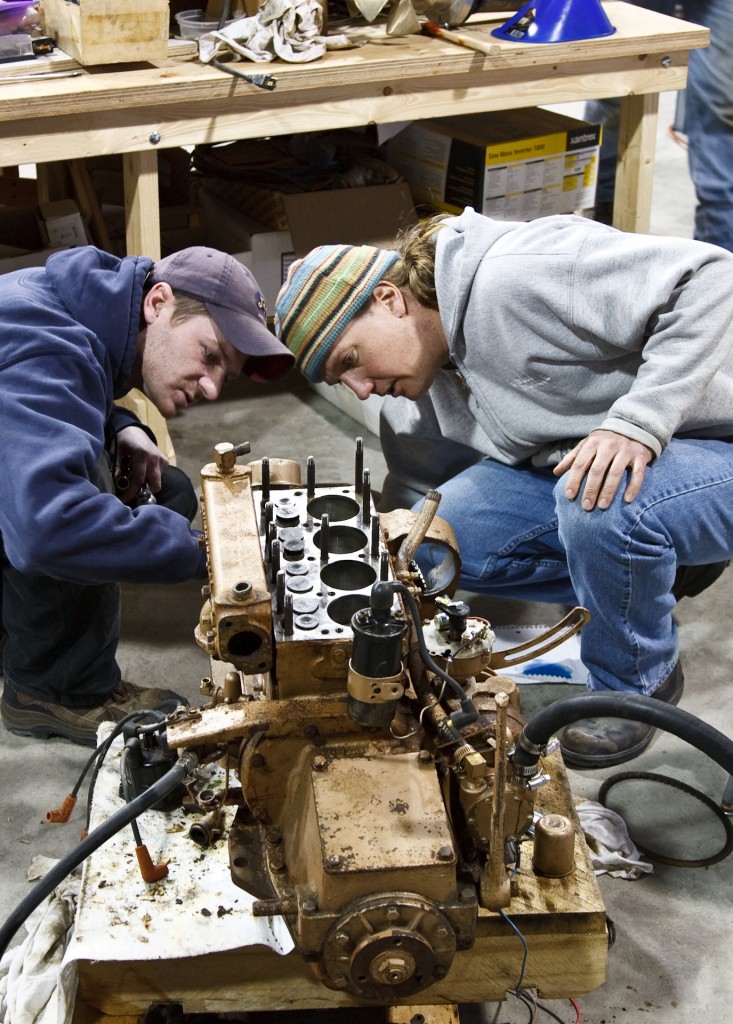 Students in the IYRS Marine Systems Program learn to install, maintain, and troubleshoot onboard systems used on classic and modern boats. Photo by Jack Renner

In September of 2010, IYRS’s third full-time program in Composites Technology opened for business. The nine-month program emphasizes advanced composites. Advisors in the composites trades have lauded this curriculum for its deft mix of hands-on work and theory. “Think of a tree,” explains Director of Student & Industry Relations Clark Poston. “The trunk is our core restoration program; the other programs are our branches.”

The technologies taught at IYRS are diverse, but there are common threads among the programs. All students learn to master a craft while developing their skill on real-world projects. Restoration students restore 12′ Beetle Cats in their first year, and move onto new challenges in their second year. These may include restoring 6-Meters, a Concordia yawl, and a series of motor launches. Composites students study with lead instructor Henry Elliot and learn their craft while building a fleet of Moths. IYRS’s Susan Daly said, “We wanted a building project that would teach and test our students, while also capturing their imaginations.” 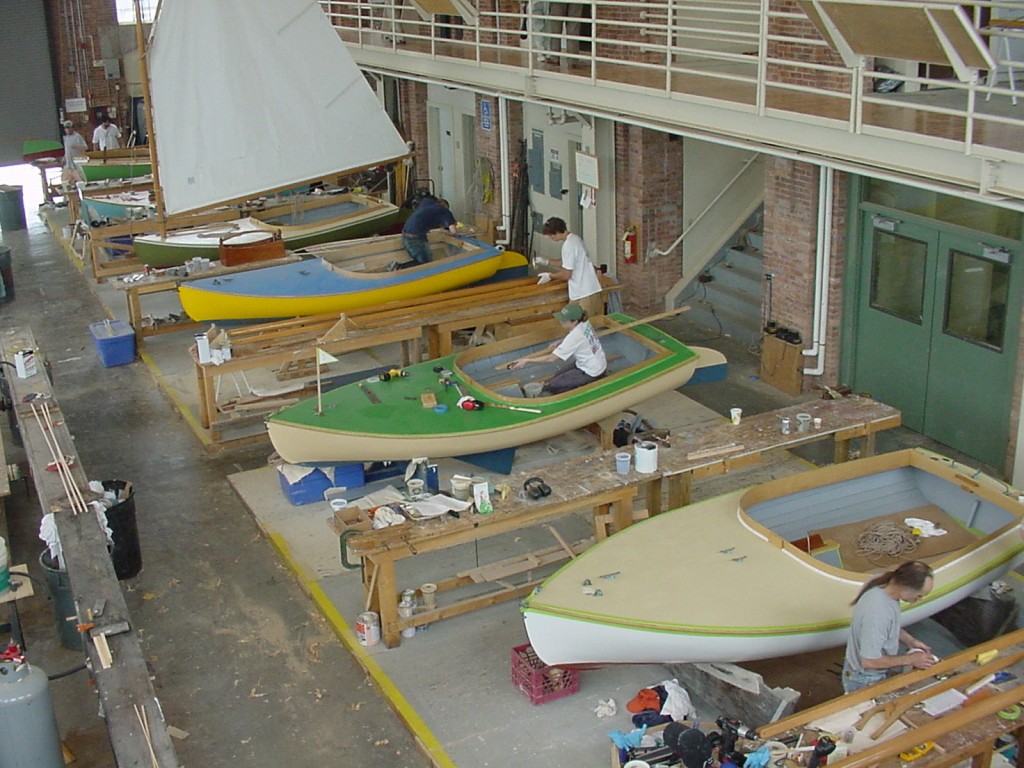 Students in the Boatbuilding & Restoration Program at IYRS work in teams of two in their first year to restore 12-foot Beetle Cats. Photo by Jay Picotte

These diminutive single-handed hydrofoils have been clocked at 27 knots and will be more than an effective teaching tool. IYRS will partner with a Newport public sailing facility, Sail Newport, to bring these high-performance dinghies to the public. “Our sport does a great job of teaching young kids to sail, but we don’t do as good a job at keeping those kids engaged in the sport as they grow into young adults,” said Sail Newport Executive Director Brad Read. Once built, the dynamic Moths will join the Sail Newport fleet as the perfect magnet for young sailors who might otherwise migrate from the sport.

Each summer, IYRS has a unique graduation rite. After certificates are handed out, the graduation crowd walks to the school docks for a ceremonious launching of the boats students spent their year working on. In summer 2011, when the first Composites students graduate, traditional Beetle Cats will be splashed alongside otherworldly Moths. That scene will signal what many already know: IYRS has grown from its historic roots into an institution that trains students in the many technologies used in boatbuilding today. 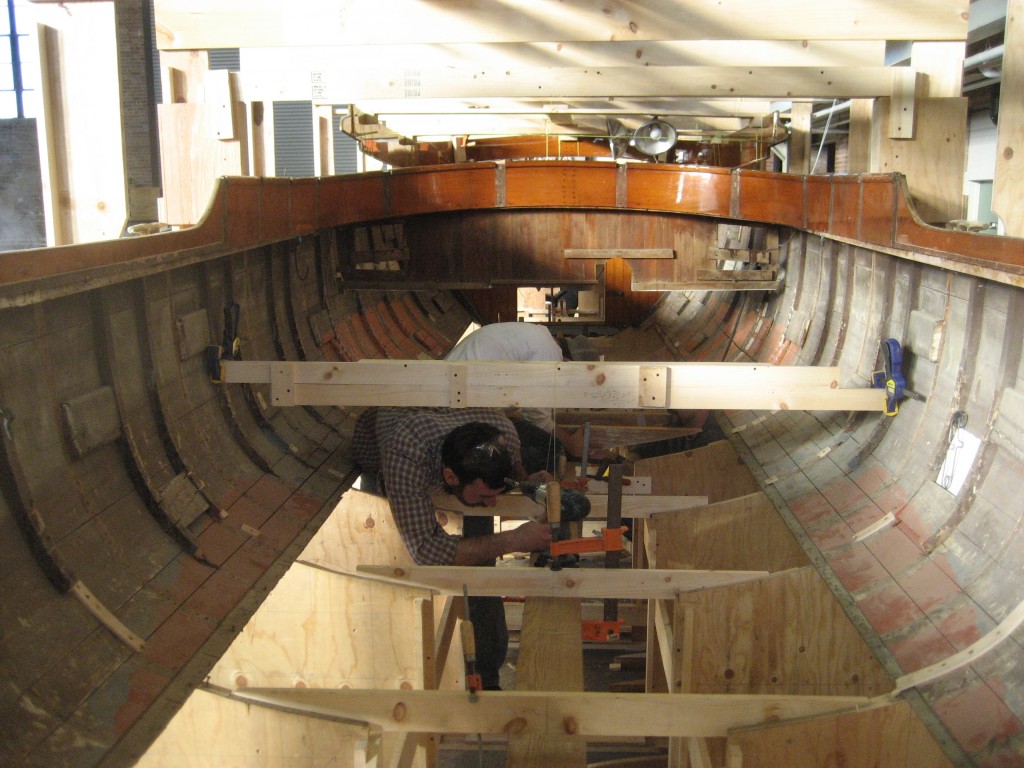 Second-year students graduate from the Beetle Cats and work in larger teams on projects that present new challenges. Here, a student works on the restoration of the 35-foot motor launch Corsair, originally launched in 1939 for yachtsman and financier J.P. Morgan. Photo by Caitlin Wood