On November 27, 2006, ground was broken on a perfect waterfront site overlooking the Les Cheneaux islands in Cedarville, Michigan in a ceremony that marked the end of a two-year fundraising effort and the beginning of The Great Lakes Boatbuilding School.

The Les Cheneaux Islands are a group of 36 small islands, some inhabited during the summer months, along a 12-mile stretch of the southeastern shoreline on the Upper Peninsula of Michigan about 30 miles northeast of the Straits of Mackinac. Les Cheneaux is French for “the Channels” which describes the extensive system of channels in and around the islands which make it a popular resort destination for boating and kayaking. Cedarville and its neighbor three miles to the west, Hessel, are small mainland communities that provide marina, lodging, restaurant, camping, and shopping amenities to both summer and year-round residents.  It’s a beautiful and historic setting to build what has become the only accredited boat school in Michigan.

In January of 2007 Patrick Mahon, a master boat builder and highly respected instructor signed on as Program Director and began work developing a nine-month program. The new 12,000 square foot facility was dedicated with a ceremony on August 4, 2007, in honor of the Noyes family, summer residents since the 1800s, and a major fundraiser for the project. In September, the school received its Michigan State proprietary school license and the doors opened for the first seven students. In October, North Central Michigan College’s Board of Trustees unanimously approved an articulation agreement with the Boat School to establish an associate degree in wooden boat building as part of their Applied Science Degree program. The school’s mission statement says it all:

The Great Lakes Boat Building School teaches and inspires students in the art and craft of traditional and contemporary wooden boat building, which prepares them for productive and rewarding careers in the marine trades.  We strive to contribute to the growth of each student as a person and as a craftsman to impart an appreciation of the maritime heritage of the Great Lakes and North America.

My relationship with the school changed a bit sometime in late 2011 or early 2012 when Bud McIntire, Student Services and Industry Relations Director, asked me to take the spot on the Program Advisory Committee vacated by my friend and retired co-worker Jim Watson. I am privileged to join Sandy Bryson from the Michigan Maritime Museum, Tom Flood a past president of the Antique Classic Boat Society, Brian Nettleton a shop instructor with Detour, Michigan High School, and Steve Van Dam, renowned boat builder and owner of Van Dam Custom Boats. The names and faces have changed over the years on the Executive Board and Technical Advisory Board (which is now the Program Advisory Committee.) For example, Tom Flood has been an officer on the Executive Board, a director on the board, a director on the Tech Board, and now a member of the program committee. The school has been very fortunate to have many such involved and talented people each of whom has contributed to the wise guidance of the school, from accreditation to financial viability. The value of proper management as a key to the success of the school cannot be overstated.

So enough about the history, let’s look at what’s happening in the shop now for the 2013-2014 school year. I took a little drive recently up to Cedarville—a paltry 452-mile round trip—to visit, take some pictures and do some research for this article. (To Michiganders, “up” or “up north” means heading someplace north of Bay City or West Branch, depending on how far south you start). I was met by Pat and second-year instructor Andy James. Pat was busy with first-year students so Andy gave me the nickel tour and explained each of the current projects they are working on.

We began my tour of the Great Lakes Boatbuilding School by looking at a commissioned project that the four second-year students were working on which is an 18 ft. Runabout designed by Tad Roberts. What was originally commissioned as a 16 footer became an 18 footer at the urging of Andy, Pat, and other staff. Andy explained that after looking at the lofting, a skill that all the students experience, the lines just looked better at 18 feet and they convinced the owner they were right. Built using ¾” cut plywood frames, the boat will be stripped with ¾” thick cedar to the chine and fiberglassed, the sides will be 3/8” plywood lapstrake. 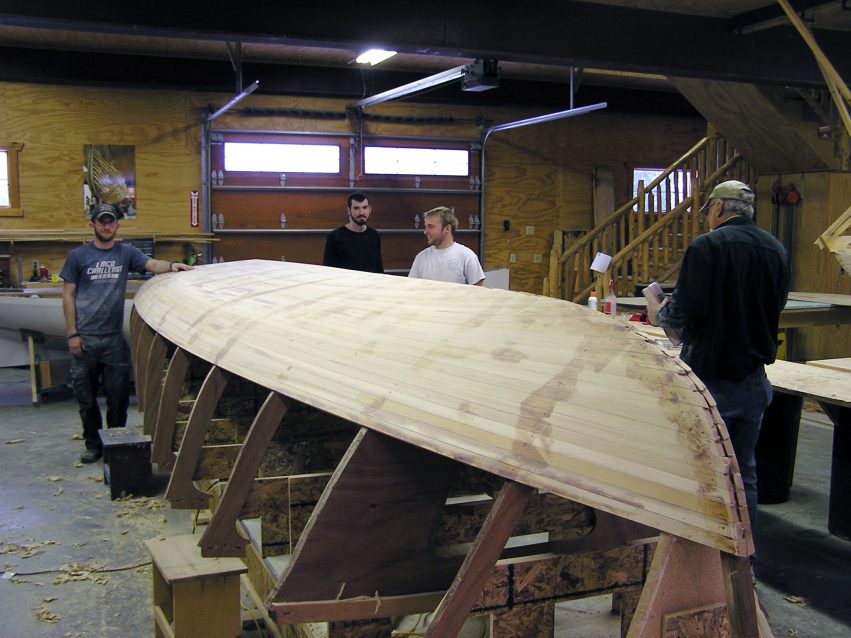 The cedar is on and getting sanded fair before getting coated with epoxy and glassed by second-year Great Lakes Boatbuilding School students: (l-r) Troy Huesdash, Matt Edmondson, Kris Kindt, and Del Jacobs. 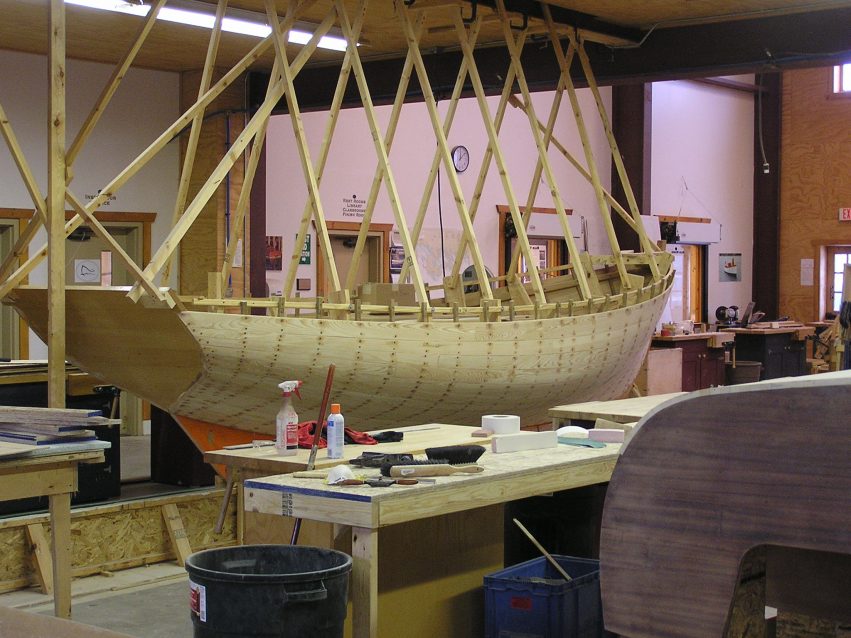 The school accepted this 20′ fiberglass launch as a commissioned job to modify and finish the interior structure necessary to convert it into an electric launch and to install a wood/composite deck. 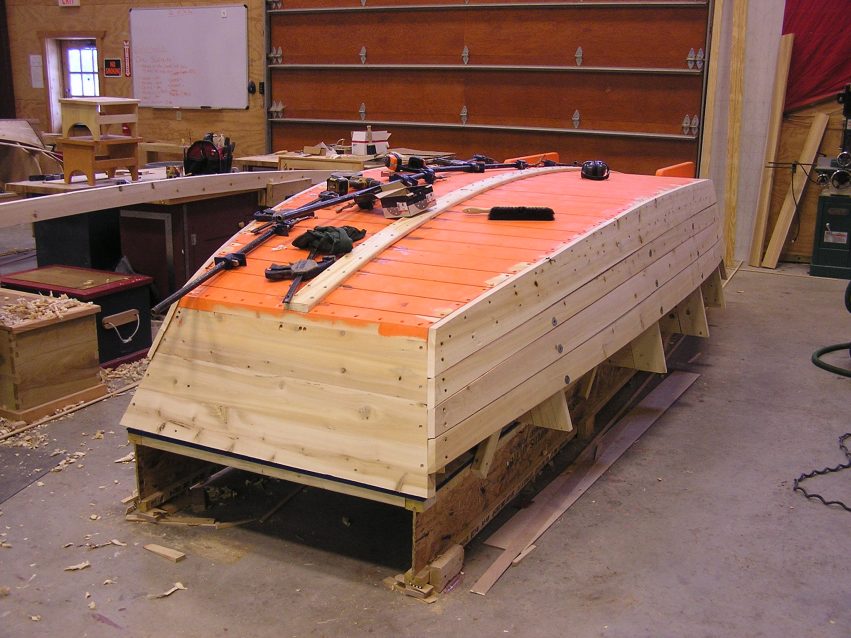 A Garvey workboat – a 16′ design that utilized the scantlings from the original 19’ 7” design built at the Mystic Seaport Museum. It will be driven by an outboard engine mounted in an inboard well and, like the original, it will help move Great Lakes Boatbuilding School boats. This boat was found somewhere in Michigan and given to the school. The students had to work to get the boat back on its lines so they could take scantling measurements and loft the boat to make the replica. This is a cold-molded, cedar stip and glass, vacuum bagged hull that was built at the school and had been sitting for a couple of years and not getting much attention – so Andy bought it for himself. He’s in the process of adding floors and interior structure. Eventually, it will have a cuddy cabin and be powered by a 15 – 25 hp outboard engine. Perfect for toolin’ around Les Cheneaux. This build is a replica of a 100-year-old design sold by the Petoskey Boat Co. The original boat sold for $40 in the 1910 catalog. 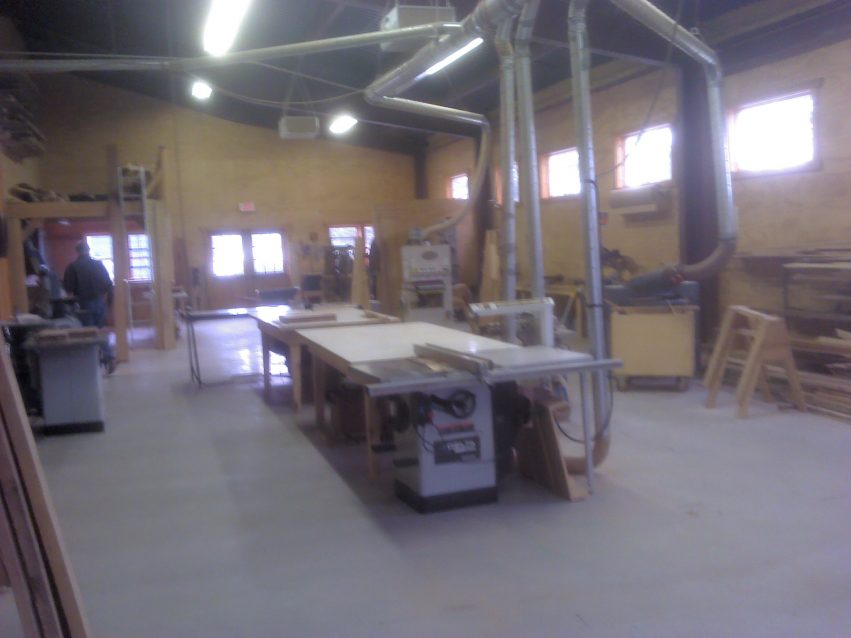 The mill shop where wood is stored and machined at the Great Lakes Boatbuilding School. The whaleboat was launched at the public dock in Cedarville during the 2013 graduation ceremony. 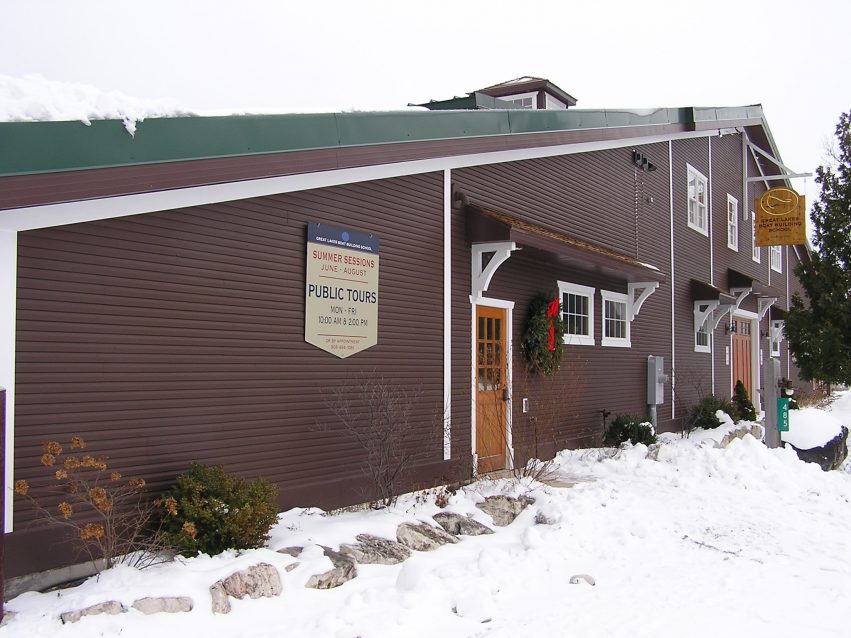 The front of the Great Lakes Boatbuilding School on the day I visited, December 2, 2013. There’s already plenty of snow around. Living in the UP takes a special breed of individual and one thing is for certain—you must like winter! The view across the channel of a vacation home boarded up for the winter. I’m told none of these houses are insulated for a U.P. winter and sit empty until spring.