A Marquetry Love Letter to the Allman Brothers

The design features my marquetry rendition of some of the original artwork by Wonder Graphics on the inside cover of their epic Eat a Peach album, released in 1972.

In the early days of my woodworking career, beginning in 1981, I spent time as a boatbuilder at Wood Boats, a restoration yard in Norwalk, Connecticut. From the first day of my job there I learned the importance of epoxy in all aspects of boatbuilding. Inspired by reading Mother Earth News, I moved to rural Maine, built my own home, and got a job at another boatshop (this one in a huge, defunct chicken barn) in Lincolnville, Maine. I started my own woodworking shop in 1988.

In 2013, I began building custom art guitars. Somewhere in the far reaches of my mind, I recalled that The Gougeon Brothers on Boat Construction had instructions on how to lay a teak deck. This became my justification for choosing WEST SYSTEM Epoxy to glue my wood veneer marquetry designs to my solid Honduras mahogany custom guitar bodies.

I accessed the digital version of the book (available free at westsystem.com) and found the paragraph I was looking for:

We have had excellent results with teak decks that have ended up measuring about ¹⁄₈” to ³⁄16″ (3 mm to 5 mm) thick. We feel that ¹⁄4″ (6 mm) thick is about maximum for this type of system, and we advise against using any thicker strips. The reason is that WEST SYSTEM adhesive bonding is able to overpower the expansion-contraction forces which occur in these thinner sections. Teak strips of much thicker dimension, such as ³⁄8″ or ¹⁄2″ (9 mm or 12 mm), might create forces so great as to overwhelm the adhesive, causing it to fail. We see no reason to go to any teak veneer thicker than ³⁄16″.

The relevant wording of this paragraph for my application is “WEST SYSTEM adhesive bonding is able to overpower the expansion-contraction forces which occur in these thinner sections.” They are speaking of teak veneers that are 1/8″ to 3/16″ thick. For my marquetry work, I am using commercially available wood veneers of many species, ranging from 1/42″ to 1/28″ thick: much thinner than 3/16.” In the world of boatbuilding, Gougeon’s research withstands the test of time. I’ve never had a veneer lift when using WEST SYSTEM Epoxy. Good stuff!

My guitar-making methods are always evolving. It’s a huge subject and there are now more sources of information than ever. Gone are the days of closely guarded secrets won by years of long apprenticeships. The Internet has produced a tidal wave of information available to all. I could hide what I’ve learned, or I could just tell you. I will add the caveat that what works for me may not work for you.

In my first guitar designs, I used 105 Resin and either the 205 Fast or 206 Slow Hardener for gluing my marquetry design to the mahogany body. I was getting good adhesion but didn’t like that the epoxy mix was not dead clear. In conferring with one of the nice folks on the WEST SYSTEM technical support line, 866-937-8797, they suggested I use the 207 Special Clear Hardener. From the WEST SYSTEM website:

105/207 Epoxy has strong physical properties, so it can be used as a structural adhesive for gluing and laminating. It has excellent compatibility with paints and varnishes. An ultraviolet inhibitor in 207 Special Clear Hardener helps provide a beautiful, long-lasting finish when used with quality UV filtering varnish. 105/207 cures clear and colorless. 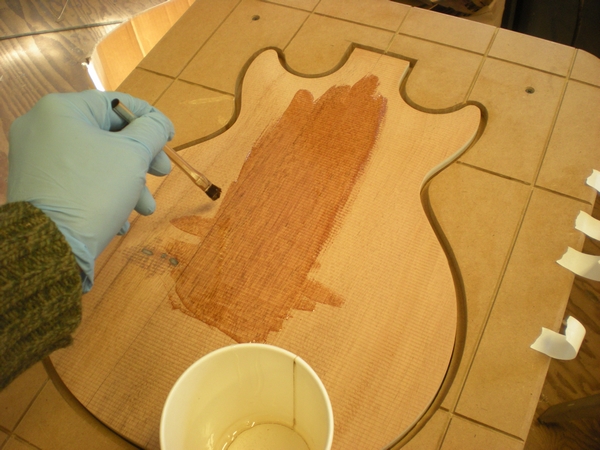 105/207 is being applied for bonding the marquetry work. Using 105/207 to adhere the marquetry and as the seal coat, gives the finished product a unified appearance.

My method of finishing has a certain logic to it that I like. I am using 105/207 for adhering the marquetry work. I use a vacuum press in this process and there is invariably both saturation of porous veneers, and bleed-through in the many joints that are between the pieces of cut veneer. Using 105/207 for the finish, I’m able to achieve a unified appearance.

After the vacuum glue-up, I sand it level starting with 120-grit working up to 400-grit. I detail the marquetry using a knife-tipped wood-burning pen. I add lines or shading to accentuate the design. 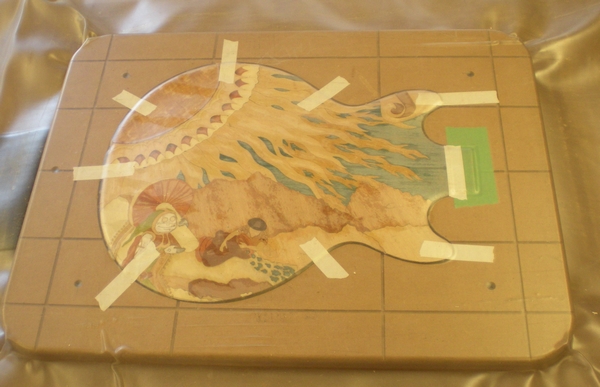 A vacuum press clamps the marquetry onto the guitar body with even pressure across the whole surface.

I am then ready to apply a seal coat of 105 Resin/207 Special Clear Hardener. I let the epoxy sit on the surface until it has soaked in as much as it will, then remove the excess with a rag, treating it like a wipe-on polyurethane. I do this on the first coat to remove the risk of micro air bubbles ending up in the finish. I can then proceed with further coats through the course of a day, waiting until the tacky stage to apply the next coat. I repeat with more coats until I have enough of a surface film to sand the epoxy level without going through to the wood. Then I proceed through the grits until I have achieved a surface with sanding scratches so fine they are undetectable. I add one or two coats of semi-gloss wiping varnish and let cure thoroughly before the final buffing.

I’ve chosen one particular guitar to feature in this article with my construction images, the Eat a Peach tribute guitar, which I consider my love letter to the original Allman Brothers Band. I’ve been playing guitar all my life and was hugely influenced and am still wowed by the music and musicians of this group. The design features my marquetry rendition of some of the original artwork by Wonder Graphics on the inside cover of their epic Eat a Peach album, released in 1972. 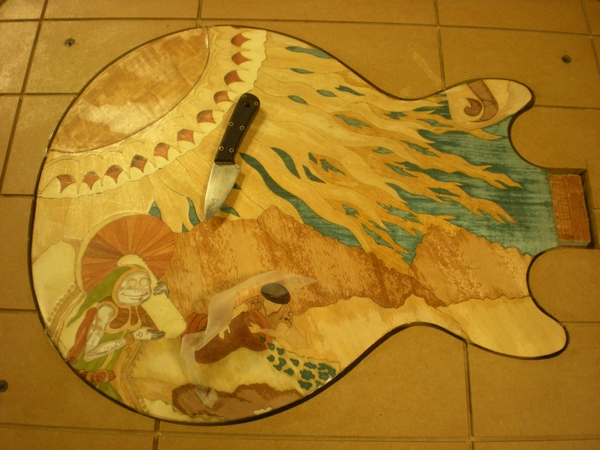 With the epoxy cured, the vacuum film was removed and the piece is now ready for sanding and detailing with a knife-tipped wood-burning pen.

I couldn’t have foreseen the wild ride this guitar would take me on. I had been promoting it on my Facebook business page and received a message from Warren “Skoots” Lyndon, the younger brother of Twiggs Lyndon, the original tour manager for the early Allman Brothers. Skoots expressed deep admiration and appreciation for my guitar. We ended up writing, then talking, at which point he introduced me to Richard Brent, the Director of the Allman Brothers Band Museum at The Big House in Macon, Georgia. The talk turned to the notion that my guitar could find a home in their museum. It seemed right to go to the next step and travel to Georgia and meet each other, and to allow these guys to see, hold, and play the guitar.

Skoots arranged to have us meet him at a Deep Purple concert in Atlanta. Within two minutes of meeting, my guitar was plugged in backstage and was played like never before by Tommy Alderson, the guitar tech for the legendary Steve Morse of Deep Purple. He then handed the guitar to Doug Rappoport, Edgar Winter’s guitarist, who also tore it up.

We made our way to Macon the next day and met with Richard Brent at The Big House. We plugged in the guitar, made some music, and decided this instrument belonged in the Museum. While there, I met David “Trash” Cole, a former roadie for the Allman Brothers and a formidable musician. He invited me to join him at the famed Grant’s Lounge that night where we played the night away with some first-class musicians.

I returned home with the idea to use crowdfunding to allow friends and fans of the Allman Brothers everywhere to contribute a little bit to cover the cost of the instrument and the travel expense of delivery from Maine to Macon. In return, we offered T-shirts, posters, and even my own homemade maple syrup. Through this Indiegogo campaign, we reached our goal and made our plans to return to Macon.

Our trip couldn’t have been nicer. My previous friendships were strengthened and we were well taken care of. Southern hospitality is alive and well! I presented the guitar to the Museum at their day-long music jam on their outdoor stage as part of GABBAfest (Georgia Allman Brothers Band Association), an Allman Brothers celebration and music festival. I got to play a few beloved Allman Brothers songs on the Eat a Peach guitar with Trash and some other talented musicians before formally presenting the instrument to Skoots. Skoots spoke a bit then handed it off to Richard and the Museum. It now hangs on a special plaque that also displays the long list of names of people who contributed to the campaign.

This guitar has led me on a journey that has turned into one of the highlights of my life. I couldn’t be happier with the outcome. And just to put it out there, I’ve also created a Tribute to Clapton guitar and have been hoping for the lovers of Eric Clapton’s music to take me on another adventure!