Our volunteer boat repair crew at the 1996 Olympic Whitewater Slalom event was well prepared with a generous supply of WEST SYSTEM® 105 Resin and 205 Hardener. Our job was to fix the damage that the rocks and hydraulics of the powerful Ocoee river inflicted on the 120 boats competing in the Games. One hundred and thirty five athletes from over 30 countries came to test their skill at the 25-gate Whitewater course. Located in southeast Tennessee, it was the only medal event outside of Georgia. In this 400 meter event, paddlers are timed from start to finish, with minor time penalties for touching the poles and major penalties for missing gates entirely.

Andy Bridge of Dagger Composites headed our repair crew. His company builds many of the racing kayaks and canoes used in the Olympics. Andy is a faithful user of Gougeon’s PRO-SET<® laminating epoxies. He served as a boat repair technician at the Pre-Olympic Regatta in the fall of 1995 and the 1st World Cup event in April of 1996.

Andy and Daggar Composites engineered a Kevlar/graphite/foam core laminate to withstand the pounding of the river yet still weigh the International Canoe Federation minimum of 9kg (10kg for decked canoes). There were proportionally fewer Dagger boats lined up for repairs than boats built by other manufacturers.

For quick repairs, we chose the simplicity of WEST SYSTEM 105 Resin and 205 Hardener. Unlike vinylester resins, WEST SYSTEM epoxy has calibrated dispensing pumps that provide “no guesswork” measuring. Its cure times were predictable, even in the July heat. We performed a wide range of repairs with these products. We mixed a thick putty of resin and hardener with 406 Colloidal Silica and built up the end radii of the boats so they could pass safety inspections. We fixed delaminations. We re-bonded boats where the entire end had snapped off. We laminated an entire new cockpit rim integrally with the deck of a kayak.

Over the three major events, athletes were coming up and specifically asking for WEST SYSTEM epoxy in broken English. With judicious use of the heat gun, we completed several emergency repairs in the few hours between race runs. This allowed athletes who couldn’t afford a spare boat, to compete in both race runs. Many athletes showed their appreciation by giving us Olympic pins from their home country.

We felt that even WEST SYSTEM epoxy that hasn’t reached full bonding strength was probably better than the alternative, a duct tape patch. We repaired the boats of at least two medal winning athletes. We kept no official record of how many boats we repaired over the three weeks of training prior to the Olympic competition, but it was well over 100. Several athletes broke their boats numerous times. Not one of the WEST SYSTEM repairs failed. Many athletes wanted more information about how to take some of this epoxy back home with them. We gladly obliged. 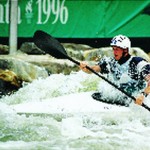 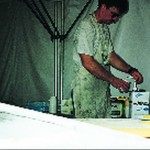 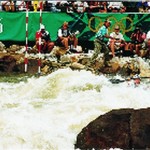