Lisa Blair sailed her 15.25-meter Hick 50 into the record books this year as the fastest, non-stop, solo sailor to circumnavigate Antarctica. The wild, demanding nature of the Southern Ocean required Lisa Blair to ensure her vessel was in the best possible condition before undertaking her voyage. Equally important was provisioning the proper materials and spare parts to cover every kind of repair job on her epic voyage.

On her first attempt at circumnavigating Antarctica in 2017, she made history as the first woman to sail solo around Antarctica—with just one emergency stop to repair a broken mast in Cape Town, South Africa. The dismasting in a violent storm prevented her from beating Russian sailor Fedor Konyukhov’s record of 102 days. Her memoir, Facing Fear, recounts the life-threatening challenges she overcame on that 104-day odyssey.

In 2017, she led an all-female team to compete in the Sydney to Hobart Yacht Race, the first in 16 years. She set another World Sailing Speed Record for the fastest non-stop solo circumnavigation of Australia in a monohull in 2018. She completed that voyage in just 58 days. In 2019, she entered as part of the first female double-handed team in the history of the ORCV Melbourne to Hobart Yacht Race.

Lisa Blair still had Antarctica on her mind. In January 2022, she made her second attempt at the record to circumnavigate Antarctica. Sailing between 45° and 60° latitude, her journey took her to little explored areas of the Southern Ocean. She collaborated with many scientific organizations, collecting data during the voyage aboard her vessel Climate Action Now. After 92 days, 18 hours, 21 minutes and 20 seconds, she successfully completed her goal of being the fastest sailor to circumnavigate Antarctica. 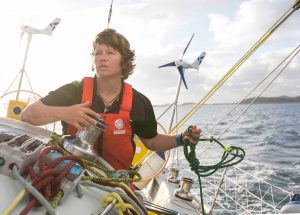 “I’ve been very hands-on, working alongside the specialists at Wright Marine who have replaced the boat’s carbon fiber and fiberglass shrouds and changed them from inboard to outboard. We’ve changed the location for the pick-up of the rigging to allow double-spreader rigging. This gives the boat a 30-percent increase in strength and confidence in the safety margin,” Blair explained.

WEST SYSTEM Epoxy is an industry standard for boat restoration and repair because it creates an effective moisture barrier and provides superior secondary bonding strength. Vacuum bagging the reinforcing materials further enhances the laminating process, ensuring even clamping pressure over all repair areas regardless of the size, shape, or number of layers.

“It’s a simple choice,” Stevens said about specifying WEST SYSTEM Epoxy products and working with ATL Composites. “We always know what we’re getting and we’ve never had a problem. This is our first time using carbon fiber and we’re very impressed. It’s beautiful! It stayed together brilliantly. We’ll definitely use them again. We always turn to ATL for support, especially if we have something that stumps us. The experts at ATL provide great advice.”

Ahead of embarking on the Antarctic circumnavigation in January, Lisa Blair met with Lorraine Duckworth from ATL Composites to stock up on WEST SYSTEM products to keep her yacht ship-shape during her odyssey. Along with the Wright Marine specialists at Rivergate Marina & Shipyard, Blair completed a structural upgrade on Climate Action Now. Blair carried out much of the refit work herself.

The sailing yacht is laden to the gunwales with materials for scientific research projects on the water and the seabed, and spare parts to cover every kind of repair job on her epic voyage. Blair discussed her upcoming voyage with Lorraine Duckwork of ATL Composites.

ATL: What do you anticipate will be your major challenges during your Southern Ocean and Antarctic quest?

LB: This is my second voyage, so I’m not being over-confident. It’s a long trip and I can’t go too hard too soon. My goal is to complete the circumnavigation in 102 days and beat the current record. I need to pass Cape Horn and Iceberg Alley and do it safely. I have trained hard for this, both physically and to ensure that I’m strong mentally as well. I have found that getting to the starting line is harder than the trip. Preparation is key. The weather is always a variable, so I keep an eye on that.

ATL: What kinds of challenges will your yacht face in those waters?

LB: The boat will do a lifetime’s worth of work in three months. By the time it is halfway around, things start to wear out and you have to start “re-building” the boat. There’s constant movement and stresses, but I’m confident in Climate Action Now and know it’s capable. I have 16,000 nautical miles of experience [on the boat], so I feel well prepared

ATL: How have you prepared your onboard kit to carry out repairs underway?

LB: It’s important to have spares and replacements for every part of the boat from engine, through to the galley, and having the right products for onboard repairs is imperative. It has been great to have ATL as a sponsor. The composite products will cover everything from strenuous fiberglass repairs at sea, to patch repairs with WEST SYSTEM Six10® Thickened Epoxy Adhesive.

LB: It is clean and efficient. With the static mixer, there is no concern about dispensing the correct mix ratio. I find it simple to use because it fits in a standard caulking gun. With Six10, I can complete repairs quickly with less mess. Its fast cure-through is ideal for small repair and reinforcing projects, so I can make repairs in less time with less mess.

ATL is supplying Lisa Blair with several WEST SYSTEM products, including Six10. This epoxy is packaged in a specially designed, self-metering cartridge. This innovative container provides many useful features:

All adhesives rely on surface wet-out and saturation to achieve a good bond with the substrate. Six10 has a viscosity high enough to resist sagging but can still saturate a surface without pre-coating, thanks in part to shear thinning. This property also enables it to wet out light-to- moderate-weight reinforcing fabrics like fiberglass and carbon fiber.

Climate Action Now is named to convey Blair’s core message: Manmade climate change impacts our environment. The yacht is covered in a digital vinyl hull wrap showcasing a collage of thousands of different Post-It note messages, like “I ride to work for climate action now” or “I recycle for climate action now.” It’s a simple and effective way to share ideas for cutting back on emissions in everyday life and inspire others to take action. 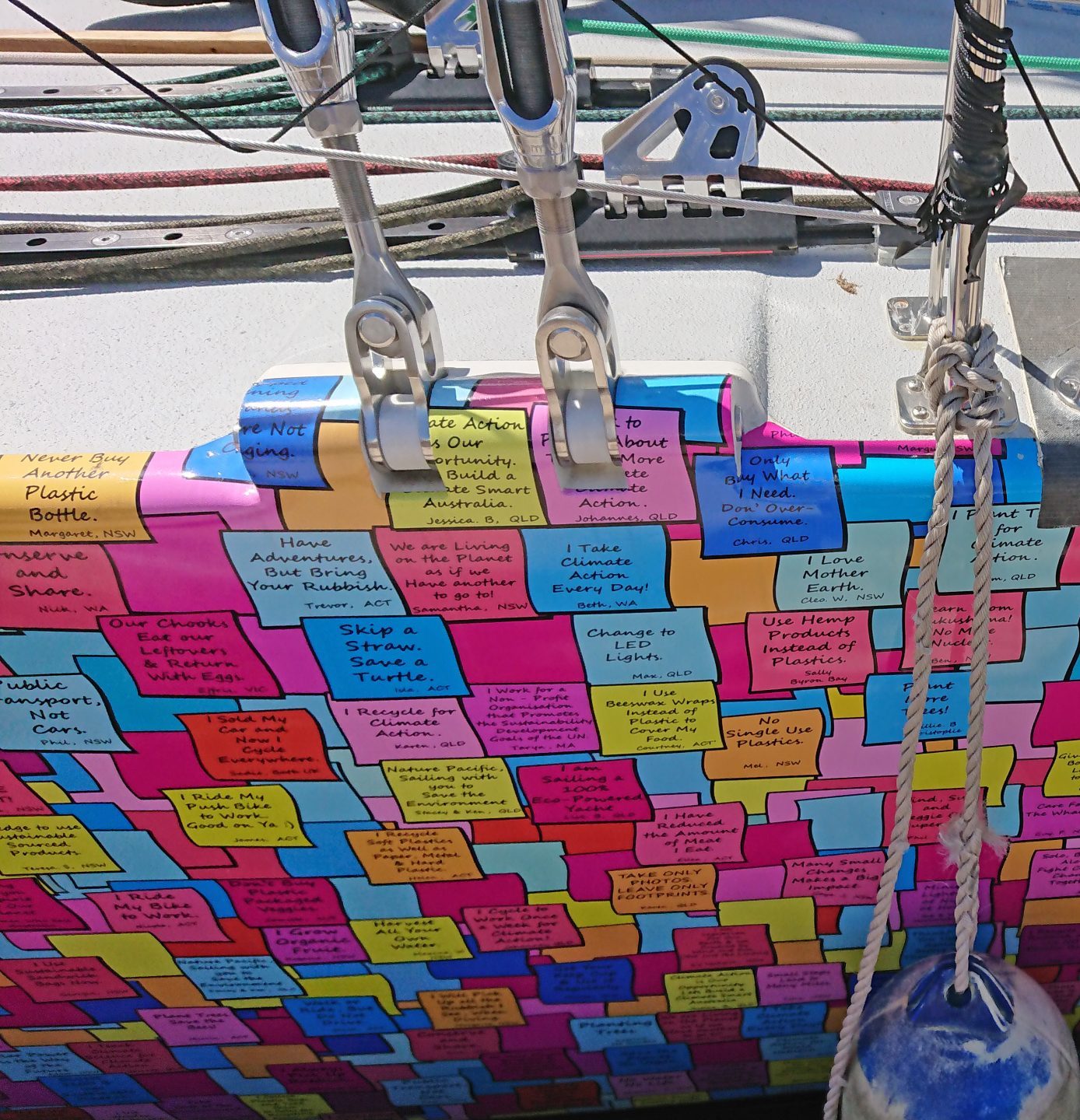 Carbon repair made with West System Epoxy. The vinyl wrap on the hull is a collage of thousands of messages sharing how people cut back on emissions in their everyday lives.

Since taking up sailing in 2005, Blair has witnessed the declining health of the oceans, prevalence of storms, and the real risk of collision with ice as glaciers melt at a rate never before observed.

“These are all symptoms of man-made climate change,” she says. “What we know is that action needs to be taken and a greater awareness needs to be reached.”

Blair’s campaign encourages people to commit to actions as individuals, such as taking public transport, riding a bike or carpooling to work, and recycling as steps towards climate action and a better future.

“People are so conditioned to be limited in our goals and views,” she continued. “Until we put ourselves in uncomfortable positions, we don’t know what we’re capable of. I went from no sailing experience to 10 years later holding three World records.”

“I really want to show people that you can achieve anything you set your mind to. Whether that’s to run a successful business or go on an adventure—to live their dream, whatever it is. Life’s too short not to.” 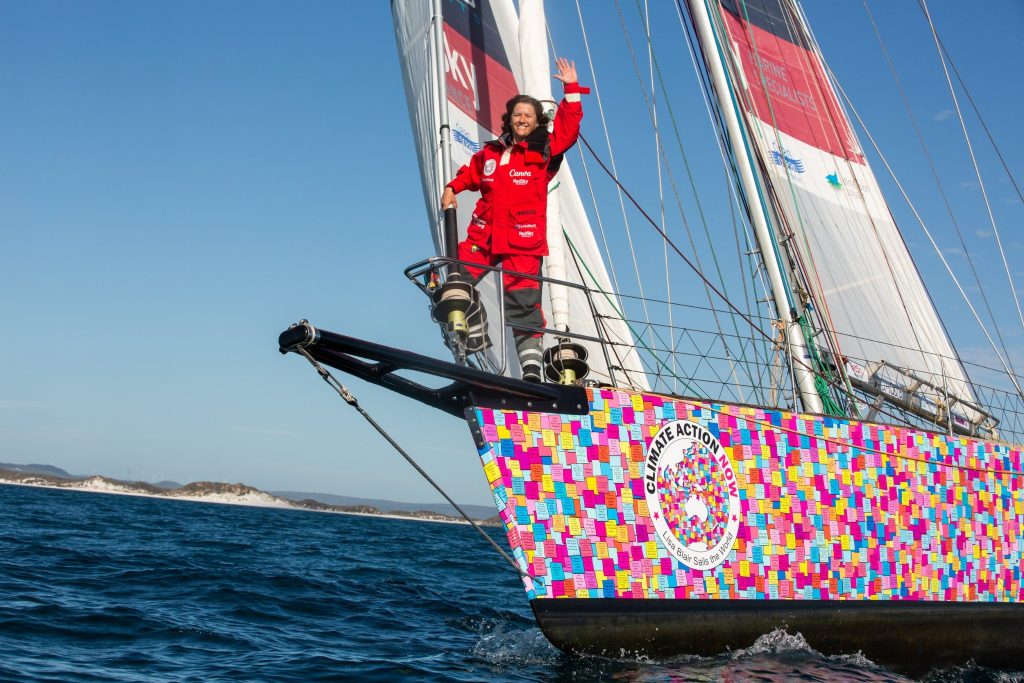 Lisa Blair at the bow of Climate Action Now.

To learn more about Blair’s campaign, visit lisablairsailstheworld.com or westsystem.com.au