This battleship replica was built by Rob Neill of Naples, Florida. He began building models after retiring from his job at the local power company. He spent two years building the 15′ radio-controlled replica of the Iowa class Battleship, New Jersey, using wood, WEST SYSTEM epoxy and brass. Starting from scratch, he completed a set of plans by scaling photographs and drawings from library books, then lofted a mold from the plans. 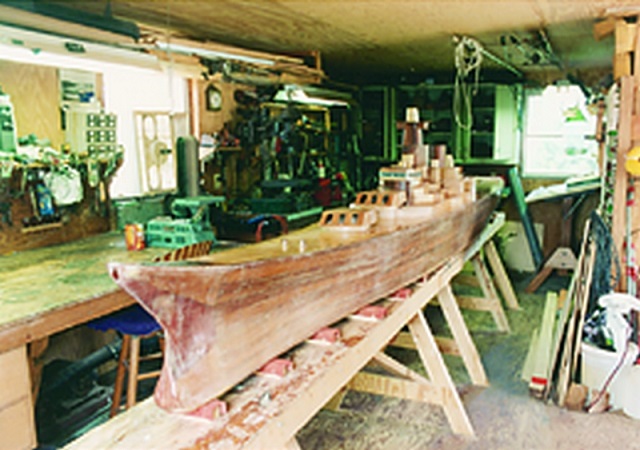 The hull was strip planked with 3/8″ x 3/4″ Western red cedar. The was carved from a block of Honduras mahogany. After fairing, Neill covered the hull with 4 oz. fiberglass fabric and six coats of epoxy inside and out. The exterior is finished with five coats of Richard’s eggshell enamel. 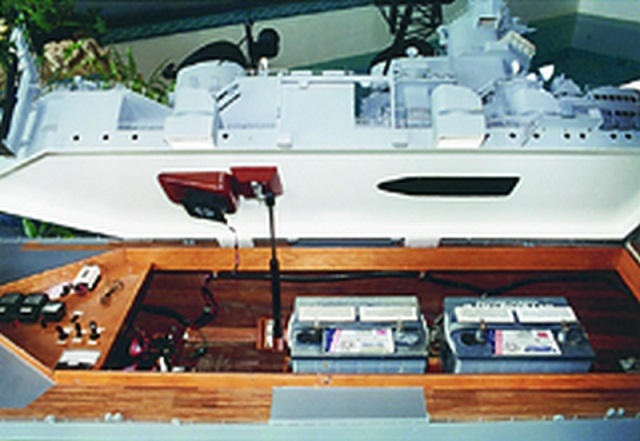 The superstructure hinges open with the aid of a gas shock for access to the control center and batteries. Power comes from two-volt deep cycle marine batteries which also run a tape deck and sound system. 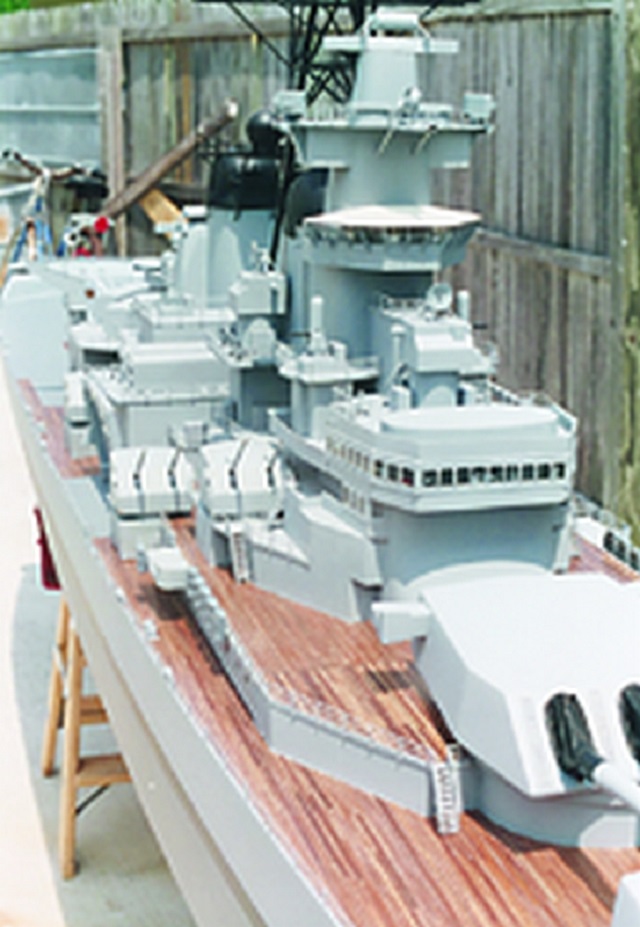 The deck is 1/4″ plywood and superstructure is 1/8″ plywood, all bonded and sealed with epoxy. To properly scale the teak decks, Neill individually laid planks with 450 yds. of black thread between each plank to simulate caulking. Towers, railings, ladders, gun barrels, and other details were made from brass stock. 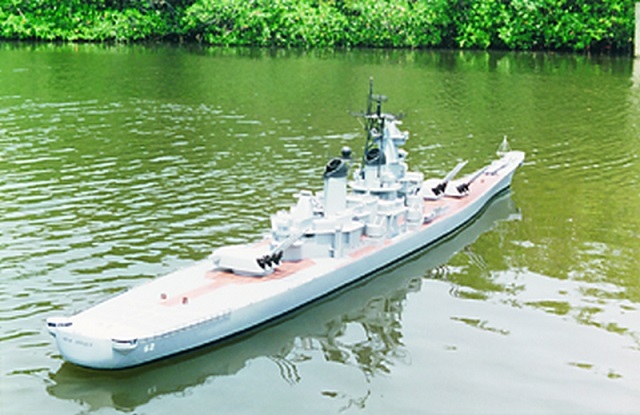 Four 12/24 volt industrial motors drive 3/16″ stainless steel propeller shafts and hand made 3″ brass propellers. Separate servos control the two port motors and the two starboard motors for maneuvering. The forward and 5′ of the hull are water ballast tanks that allow the 200 lb. model to sink into the waterline.

Thomas Heavner of Seattle Washington designed and built his own 18′ plywood runabout. Mr. Heavner sent a picture of his project and wrote, “This is the first boat of any kind that I have designed and constructed. Your book (The Gougeon Brother on Boat Construction) made it possible to build this boat. Also, the instructions I received by telephone with your people helped to make this all possible. I am a firm believer in WEST SYSTEM Epoxy and always have some in hand in my hobby shop.” The project took six months to complete. 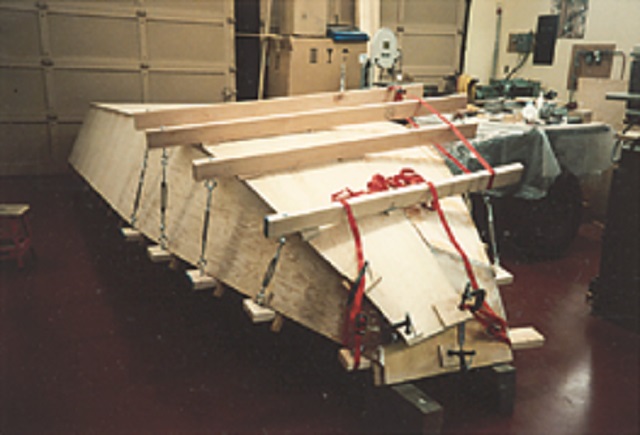 The plywood bottom was bonded to the frames with epoxy. Mr. Heaver’s clamping method assured a good bond at all contact points. After fairing the hull, it was sheathed with fiberglass cloth and epoxy before painting. 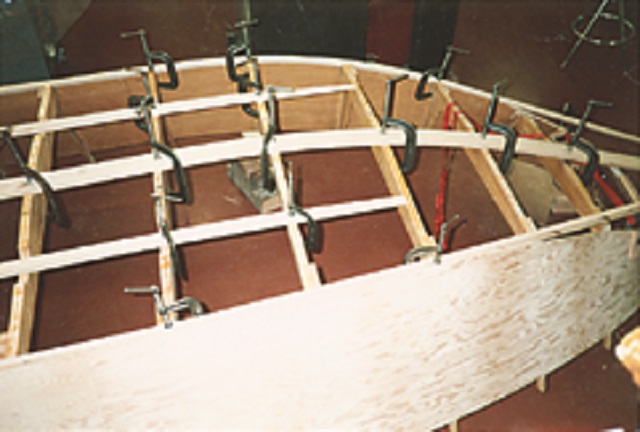 Oak frames and stringers were bonded with epoxy, The bottom and sides were covered with 1/2″ marine plywood. 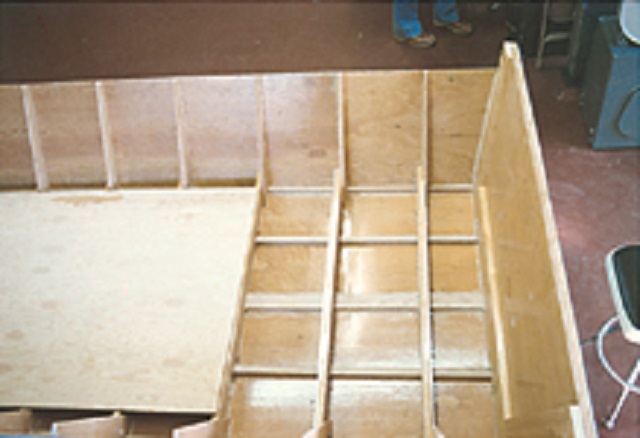 All joints and surfaces on the interior of the hull were sealed with epoxy. 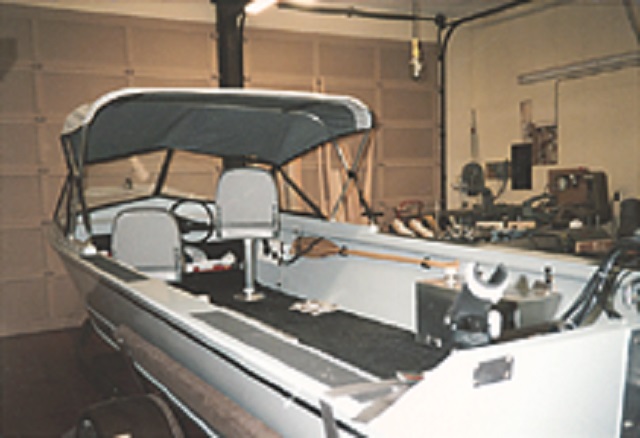 Mr. Heavner outfitted his boat with a 90 hp. outboard with jet pump. Although heavily built, it will operate as little as 8 inches in the water. 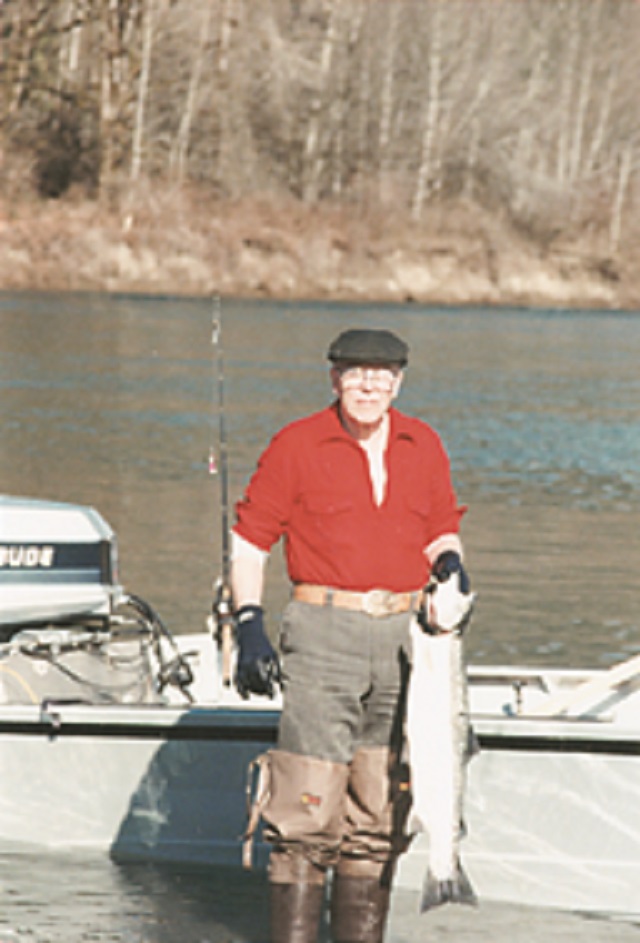 “This is the reason I designed and built a jet boat.” The fish is a Steelhead trout caught on the Skagit River in Washington.