Scarfing wood together dates back ages. Scarfing is the process of cutting corresponding angles (or sometimes shapes) on two similar pieces of wood and gluing them together to create a larger piece of lumber or plywood. The most common place scarfing is used is in building a stitch-and-glue canoe or kayak.

I had plans to build two kayaks over the winter, with five scarfs on each hull. I’d only done a few scarf joints over the years, so this was an excellent opportunity to learn the pros and cons of the WEST SYSTEM® 875 Scarffer. There are several different ways to join plywood but for stitch-and-glue construction, scarfing allows more of a natural bend to the wood that you can’t achieve with a butt block or a half lap joint.

Like any new woodworking tool, there is a little setup time required. You will need to drill holes in the baseplate of your circular saw. Check the alignment of the holes on the base plate before drilling. Some saws may have added support or a bracket that could interfere. It’s rare but possible. Follow the directions included with the Scarffer on laying out the holes and drilling. Then bolt the guide and guard onto the saw. If you pick up a cheap saw at a rummage sale you can leave the guard on the saw, saving you the trouble of bolting and unbolting the Scarffer every time you need to make a scarf.

Instead of trying to scarf two sheets of plywood together, I precut my panels to the size needed for the hull. This way, my longest scarf is 12 ½” and I don’t have to handle a 4′ x16′ sheet of plywood once scarfed together. The downside is that I have to set up, square, and cut ten separate pieces.

The instructions called for a piece of 2″x 4″ to be clamped on the end of a table to act as a fence to run the guide along. The end of the plywood you are scarfing needs to stick out 3 5/8″ from the fence and 3 ½” from the edge of the table. The goal here is to provide enough room under the plywood so the attachment has clearance and doesn’t hit the table. On the topside, the guide will overlap the table by 1/8″. This is to support the guide so the weight does not bend the plywood.

I thought the setup was a lot of work to go through ten times for each boat. To make things simpler, I cut a couple of stopper blocks notched by 1/8″. I screwed these onto my 2″x4″ to offset it 1/8″ back from the edge of the table. 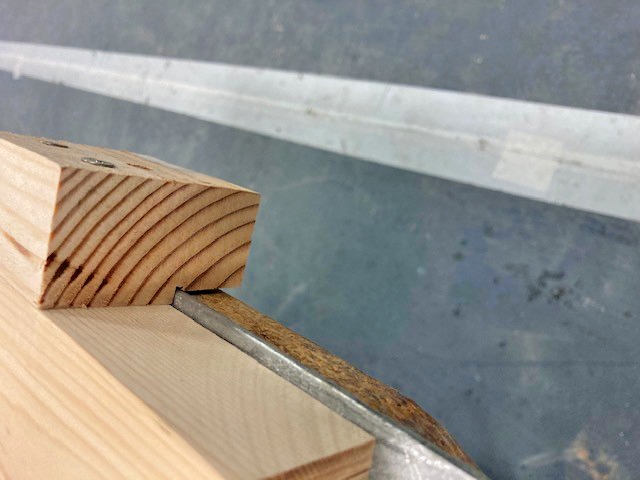 Close-up of the stopper block notched by 1/8″.

With my new setup, I could lay down my strip of plywood and place the fence assembly over top. While holding the fence assembly flush to the edge of the table, and using my combination square, I squared up my plywood with the end of the piece 3 5/8″ from the fence. When everything was perfectly aligned, I clamped the 2″x4″ fence to the table, therefore clamping the plywood between the 2″x4″ and the table too. Now I’m ready to cut my scarf. A few months later when I start the second boat, I’ll just pull my fence and scarfing saw from the shelf. I’ll be able cut the ten panels and epoxy them together in about an hour. 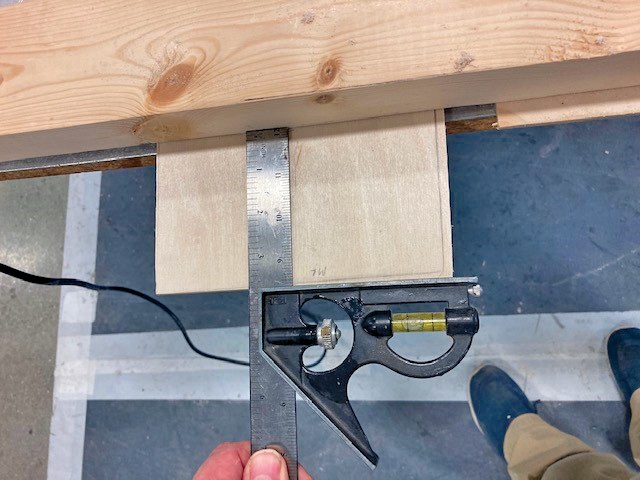 Squaring the plywood to the fence in preparation for scarfing.

A couple of practice cuts on some scraps is worth the time and material. I went a bit overboard on this, trying not to goof things up. This experimentation is how we learn and have a remedy ready when a customer contacts us. Through this, I found out about the saw twisting. Once the guide is more than halfway off the plywood, the saw’s weight wants the front of the saw to tilt down to the table (1/8″ lower than the surface of the plywood). The back of the blade is now cutting off a little extra. I tried using a small piece of wood the same thickness as I was scarfing to help support the guide, but I found it just got in the way. It wasn’t worth the trouble.  Just be aware that the saw wants to tilt and holding it level works great. 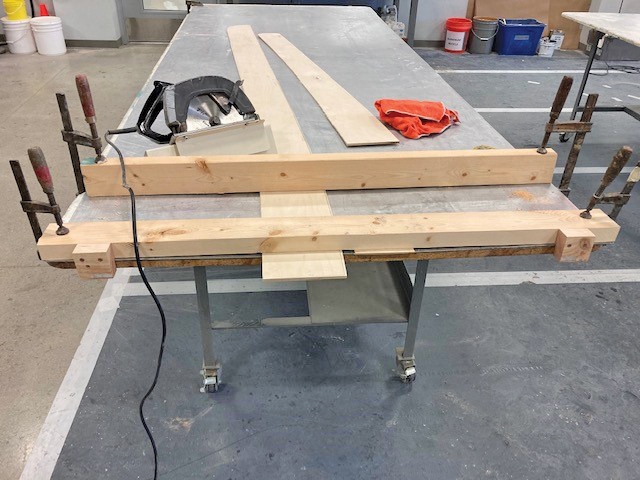 Before scarfing, the fence clamped to the plywood with additional secondary clamped 2″x4″.

Waiting for the blade to stop at the end of the cut, before pulling the saw away from the wood, was another big improvement in my technique. This helps prevent twisting the saw and gouging the wood.

If you have the end of your plywood sticking out too far (more than 3 ¾” from the fence) it will take it deeper into the sawblade and scallop the edge of your scarf. If the end of the plywood is not out far enough (less than 3 ½” from the fence) your scarf will have a flat end and will not blend in smoothly. 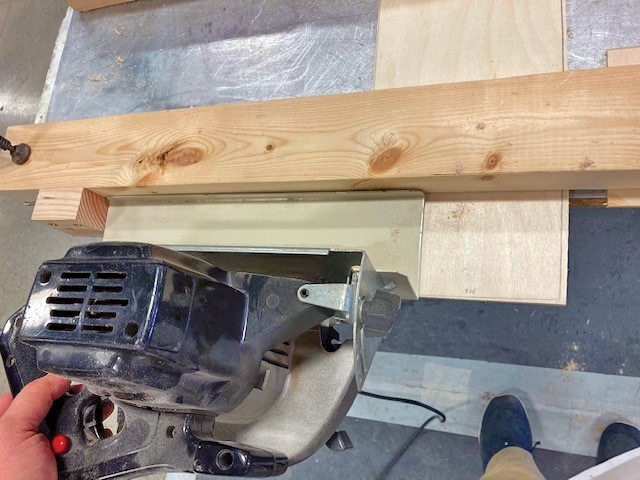 Cutting the scarf at an 8-to-1 bevel.

Do not adjust the angle of the saw blade between cuts. Both mating pieces need the same bevel.

Make sure to mark the side you are planning to cut the bevel on. One bevel faces up and the other down. If you have a “good side” to the plywood (or have already started shaping your panel), and you cut both bevels on the topside, it’s a real bummer. Not saying that hasn’t happened to me, but it won’t happen again… I hope.

Once I had everything set up (which wasn’t too complicated) and was done playing around trying to goof things up, things went smoothly and quickly. I find the 875 Scarffer a great addition to my toolbox.