Above: Robbie loads the trebuchet for another practice shot before the competition.

A while back, my nephew Robbie, about 15 years old at the time, asked for help building a trebuchet (a form of catapult) for an upcoming Science Olympiad competition that his school was involved in. He had located a nice set of plans online that were based on a lattice-type structure using hardwoods. The website offered a fairly detailed plan and included project photos to help during the build. Like many high school students, Robbie waited a bit long to get started (I was the same way when I was in high school), which meant that once again I was part of a school project that involved cramming to get the job done. I knew we needed to speed up the process in order to have any hope of getting the trebuchet built in time to allow for firing practice before the competition. We decided to use G/5 Five-Minute Adhesive® for the many glue joints involved. Given the fast cure time, we were able to quickly reuse our clamps and keep the assembly process moving along.

Reflecting on this project, long since completed, I believe G/5 Five-Minute Adhesive is ideal for building Science Olympiad projects, especially those involving wood. The competitions involve not only building trebuchets but also wooden towers and bridges to name a few examples. Towers and bridge competitions are judged by how strong the structure is. In other words, how much weight can they support before everything comes crashing down? G/5 Adhesive is ideally suited for these sorts of projects because it cures quickly, needs no clamping pressure and creates strong glue joints even if the fits are less than perfect. These qualities allow a project team to build a strong structure in a little bit of time.

The trebuchet competition requires that a projectile (usually a tennis ball) be thrown via a sling at a cardboard castle. Event scoring is based on distance and accuracy. The counterweight and the projectile are provided at the competition site, and the trebuchet team is given time to adjust the placement of their machine for distance and accuracy. There are a number of rules and measurements that the trebuchet must be built to in order to qualify for use in the competitions. Be sure to locate an up-to-date copy of the rules, because rules at local competitions can vary. The web also offers a large number of excellent sites that feature a wide range of kits, designs, and construction details. Some designs are complicated while others are simple. 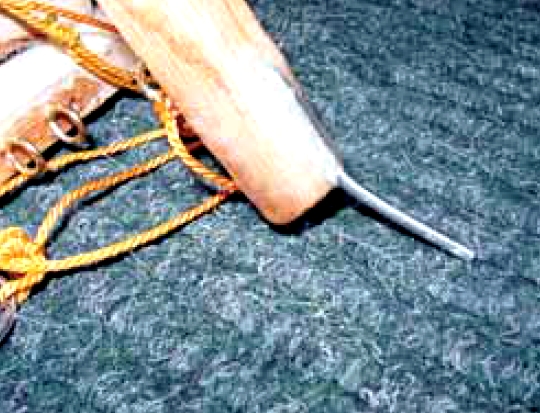 The release pin at the end of the trebuchet’s throwing arm allows one end of the sling to release at exactly the right moment, so the tennis ball makes a smooth exit. The pin is a bent nail, glued in with G/5 and wrapped with fiberglass strands saturated with G/5.

The most challenging part of the build, in my opinion, was the design and fabrication of the trigger that released the arm with a minimum of movement introduced into the structure. Another challenge was the fabrication of the release pin located on the end of the pivoting arm that allows one end of the sling to release so the ball makes a smooth exit

How did Robbie fair at the competition? He took first place, scoring the longest throws and outdistancing his competition by 20′. He also struck the tower in two out of three attempts. Congratulations, Robbie!