When Jan Gougeon built Strings in 2010 one of the most interesting features he included, at least from my point of view, was the float that goes on top of the mast. Due to its zeppelin-like shape, this is also called a blimp or a dirigible. The purpose of the float is to make the boat self-rescuing: if the boat tips, the float prevents it from going any farther than lying on its side. The mast and float are then used to right the boat. Jan developed this system when designing the Gougeon-32 back in the late ’80s, so he thought it would work for Strings.

He waxed the mold surface then laid a layer of carbon fiber fabric over the mold with 105/205 and allowed it to cure until tacky. Next the surface was coated with epoxy filled with 410 Microlight. The next day the sanding started again—this time to smooth the outside of the dirigible. It was easier to sand the outside with the part still stuck to the male mold surface and get it really close to the final smoothness.

With the first half of the dirigible held in place in the jig, the structure could be installed on the inside. This is where Jan came up with the great idea of using just tows of carbon to create a grid work on the inside of the dirigible half, like small frames or ribs on 2″ centers. The tows were laid lengthwise first (the long way) then across (the short way). This added a lot of structural reinforcement with minimal weight. 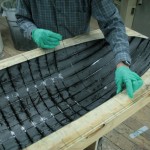 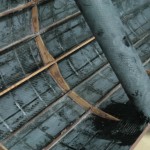 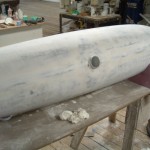 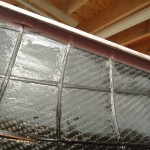 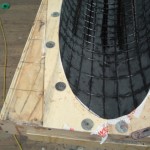 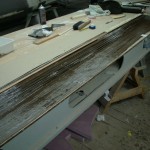 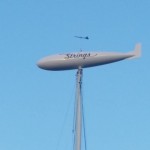