All of the seams on the MOMA Beatfuse pool bottom were sealed using 3″ cloth tape and three coats of epoxy.

Each year The Museum of Modern Art and P.S.1 Contemporary Art Center conducts what is known as the P.S.1 / MOMA Young Architects Program. The competitors vie for the opportunity to build a temporary architectural project in the 17,000 square foot outdoor galleries of P.S.1 in Queens, New York. The structure serves as a venue for the popular outdoor music series, “Warm Up” which runs from June through September each year and boasts attendance in excess of 100,000 visitors per season. 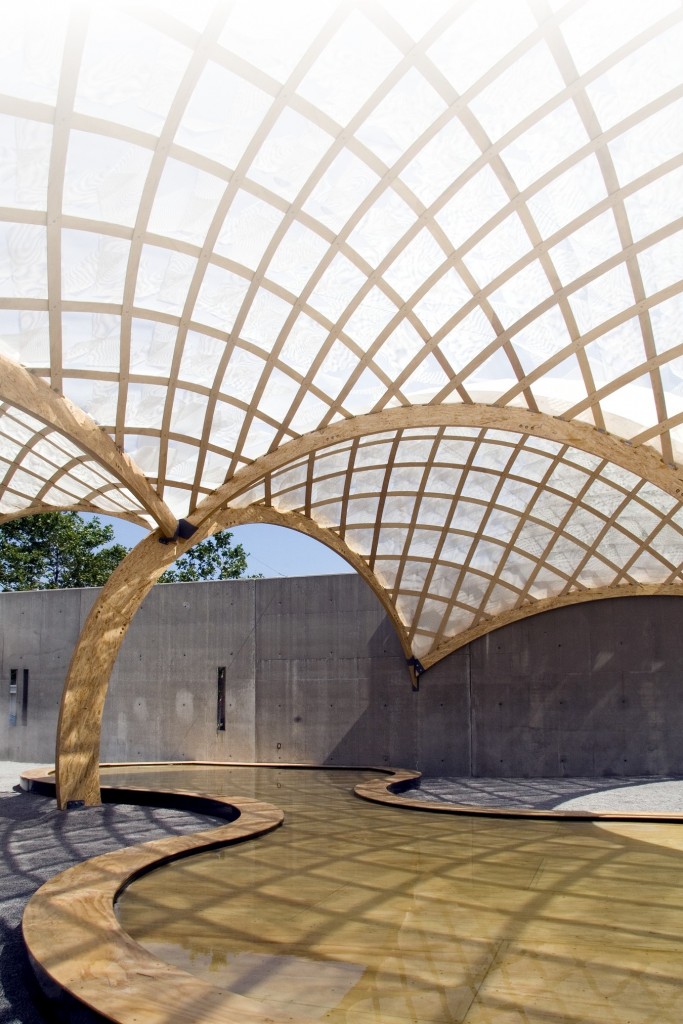 A large, walled triangular outdoor gallery space was partially covered with seven shells and included two shallow tidal pools. The structures and pools were manufactured in a workshop and later deployed on-site.

In April of 2006, Jennifer Lee and Pablo Castro of Obra Architects, winners of the Young Architects Program competition contacted Gougeon Brothers Inc. Obra had an innovative design for the P.S.1 courtyard project that included the use of wood and foam construction techniques and were a natural application for WEST SYSTEM® products.

The two major features of their project, known as “Beatfuse,” were seven interconnected domes made of plywood with polypropylene mesh roofs and two wooden tidal pools. The wooden tidal pools are where WEST SYSTEM came in handy. Obra designed two pools that were constructed of foam and wood laminated to create both the pools and the chaise lounges that appear as “spokes.”  The pools had to be durable since they would be visited by thousands of people over the summer without a great deal of supervision. In addition, the pools were located outside and had to withstand the elements while retaining watertight joints. All wood pieces were laid out and formed using CNC technology. 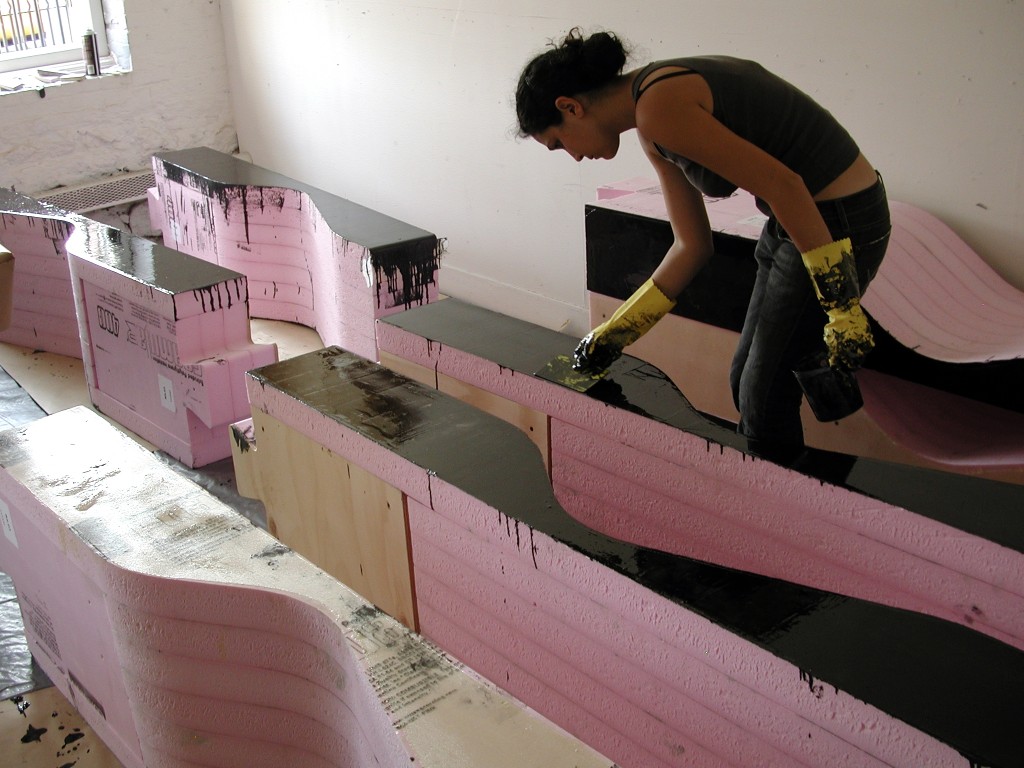 A worker coats one of the foam and wood laminated chaise lounges with epoxy tinted with graphite powder.

The first step was to laminate the structural foam layers by spreading mixed epoxy on the opposing surfaces and clamping with screws. The foam chaises required seven layers of foam while the pool bench sides took three layers.

A worker coats one of the interlocking sections that make up the sides of one of the pools. The sections are laminated foam and wood.

After the laminates were cured overnight, the next step was to lay fiberglass cloth on the side profile of the foam that would form the pool sides. The cloth lay-up was covered with release fabric to achieve a smooth appearance. After the cloth lay-up cured, the release fabric was removed and the sides were coated with epoxy mixed with graphite powder. The graphite-filled coat was followed by two additional coats of epoxy. The sections were then flipped over and the other sides were treated using the same method.

The next step was to add the plywood tops and bottoms to the foam pool wall sections.

The foam sections were sanded to open the pores to promote better adhesion. The mating surfaces of the foam bottom sections and the plywood were coated with a slurry of epoxy thickened with a structural filler and then secured with screws until they cured.

All of the bottom sections had narrow lap joints built into the adjoining sections during construction which were covered with release fabric after the last epoxy coat was applied. When the epoxy cured, the release fabric was removed exposing a surface that required no surface preparation before bonding the sections together, saving valuable labor time.

All of the sections of the pool sides were cut with dovetail joints where the sections met end to end. A similar joint in the center of each section where the side walls meet the pool bottom made a solid connection between the sides and bottom. 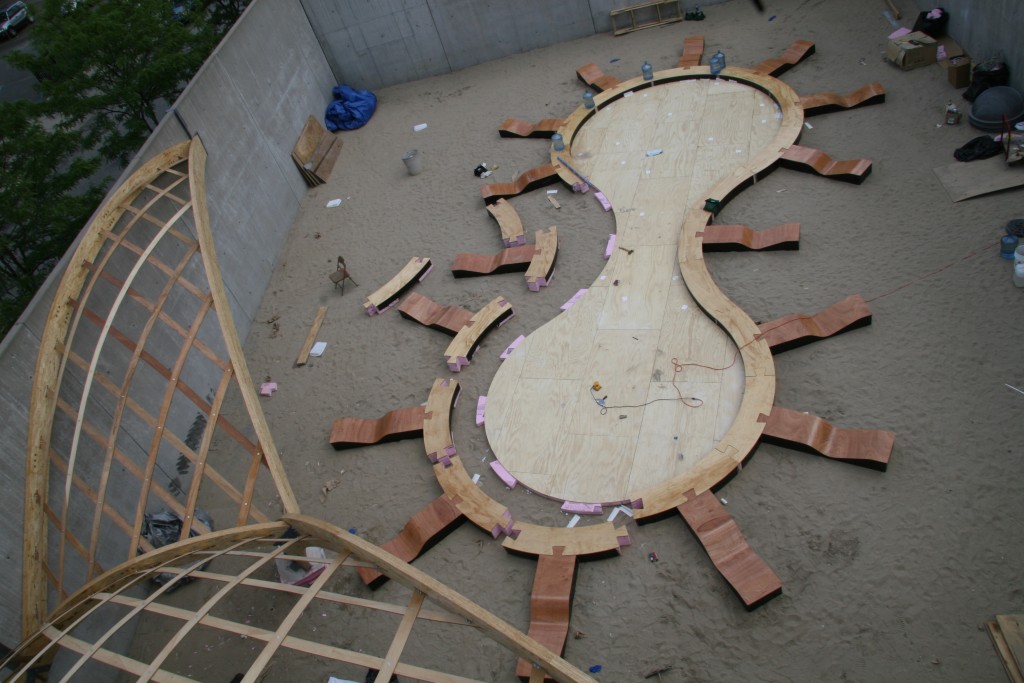 All sections were staged in place before they were bonded with epoxy thickened with a structural filler.

To complete the assembly, all sections were staged in place before the joints were bonded with epoxy thickened with a structural filler. All of the seams on the pool bottom were sealed using 3″ cloth tape and three coats of epoxy. The seams on the side walls where the wall sections were joined were handled in the same fashion. Finally, a fillet was used to create a watertight seal on the inside of the pool where the sidewall and the pool bottom meet to ensure that the structure was watertight. Since the project was temporary and 207 Hardener, which contains some UV inhibitors, was used, there was no need to apply a clear varnish topcoat.

As the photos on the right demonstrate, Beatfuse and Warmup were a big success. Obra Architects have been recognized in the architectural design community with articles appearing as far away as Japan in the prestigious “A+U” (Architecture and Urbanism) magazine. Pablo Castro and Jennifer Lee created a warm and inviting space in a bare courtyard in Long Island, Queens. We at Gougeon Brothers were very pleased that our products and technical assistance could play a small part in such a visionary and successful project.

A large, walled triangular outdoor gallery space was partially covered with seven shells and included two shallow tidal pools. The structures and pools were manufactured in a workshop and later deployed on site. 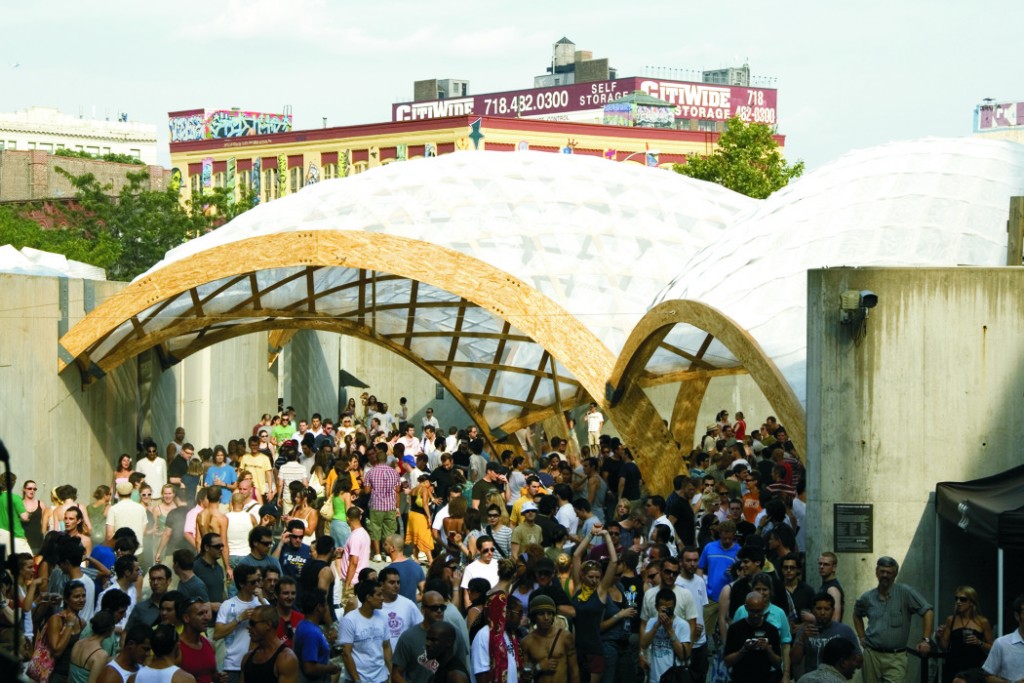 Large crowds enjoyed the “Warm Up” music series, as well as the inviting space and cooling tidal pools of the Beatfuse project. 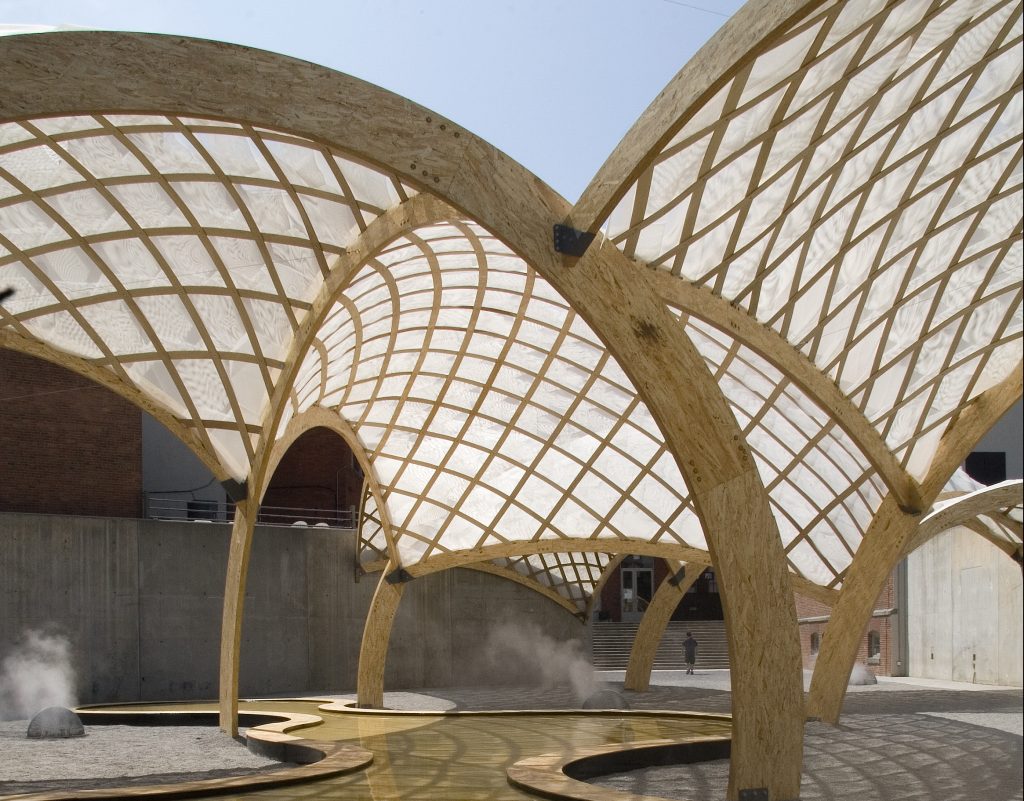 The Museum of Modern Art and P.S.1 Contemporary Art Center, site of Beatfuse, the winner of the 2006 Young Architects Program competition. 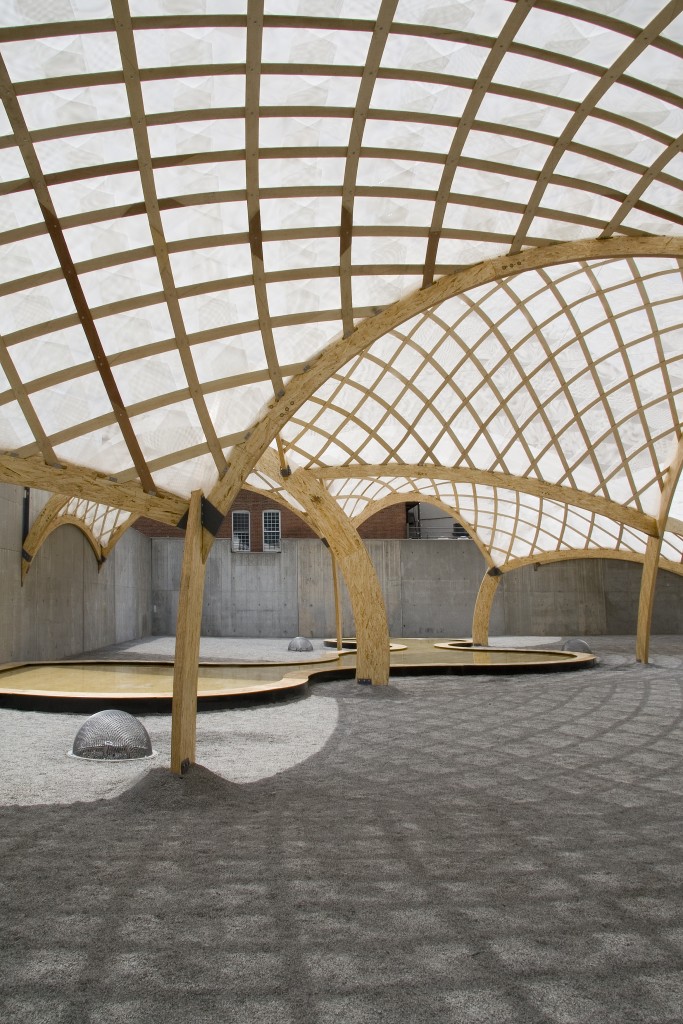 Beatfuse was designed by Jennifer Lee and Pablo Castro of Obra Architects of New York, www.obraarchitects.com.