Boats are my first love, but I get excited about projects like this Supermileage® vehicle, other SAE (Society of Automotive Engineers) and airfoil carved-foam bicycle. My job offers great opportunities to talk to some of the most talented and positive thinking people around: sculptors, inventors, rocket builders, and good ol’ boatbuilders. Folks who envision and tinker with a desire to experiment, improve, compete, make a living or just play around.

The SVSU engineering team is also involved with the SAE Supermileage program. This vehicle was designed and built by a mix of grad and undergrad students. Supermileage vehicles are set up with a 5 h.p. Briggs and Straten engine as a standard power plant which can be modified (except for bore and stroke). These high-mileage vehicles are typically a tricycle configuration using bicycle components for chassis and running gear. With its aerodynamic epoxy/glass body, you’re looking at about 700-1000 mpg. The body was molded over a carved foam shape.

Polyethylene plastic was used to release the laminate from the mold. The laminate is only a layer of woven 12 oz and a layer of 4 oz fiberglass fabric. The body is only exposed to about 50 mph forces and its curved shape is stiff enough. Carbon fiber was considered, but the cost couldn’t be justified. When SVSU showed up for the SAE Supermileage competition, their glass body was just as light as carbon versions, so they were able to spend their money on other details. 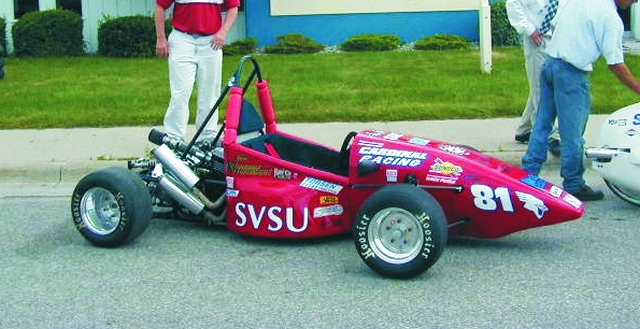 This SAE was built by engineering students at SVSU.

Saginaw Valley State University engineering students. Cardinal Formula Racing group collectively built an SAE (Society of Automotive Engineers) Formula car. This type of car races the clock on a chicane course. These young engineers made many of the parts using composite technology. The epoxy/carbon fiber intake manifold, for example, was molded over a wax form that represented the desired interior shape for optimum plenum condition. After the laminate cured, the wax was melted away, a pretty clever approach. To find out more about these cars, visit https://www.sae.org/students/. 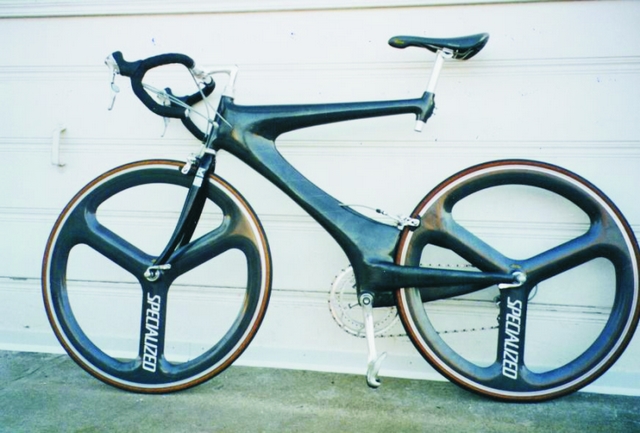 This airfoil laminate bicycle gets a different kind of “Supermileage.”

One even more efficient vehicle is Damon Rinard’s carbon fiber bicycle built with WEST SYSTEM epoxy. Actually, I only met Damon virtually, but, being a cyclist, I could not help but relate to his endeavors. Here Damon describes in excellent detail his innovative construction methods, how he tested components and then modified the prototype to produce a successful project. His text is not a how-to, it is how he did it. Damon’s construction approach utilized an airfoil-carved foam to laminate his carbon reinforcing fibers. To compact the laminate he wrapped the wet lay-up with electricians tape. That’s a good practical approach. Critical composite-to-metal joints are nicely described.