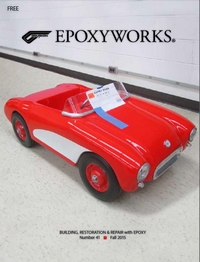 Cover Photo: This custom pedal car was the 1st place winner at MITES at both the regional and state level.

For the past two years, the Drafting/Pre-Engineering autobody class I teach at Tuscola Technology Center in Caro, Michigan has been invited to participate in a contest sponsored by Summit Racing.  Students build a custom pedal car that is displayed and judged at the AutoRAMA show at Cobo Hall in Detroit. Summit Racing either supplies participating schools with one of their stock pedal cars which can be modified and customized, or students may build their entry from scratch. We constructed our entry from scratch both years. Our first car was inspired by the Delehaye roadster and built of aluminum in an Art Deco style. END_OF_DOCUMENT_TOKEN_TO_BE_REPLACED

Meade and Jan Gougeon were inducted into The National Sailing Hall of Fame (NSHOF) in October of 2015. Meade and Jan, along with their brother Joel, founded Gougeon Brothers, Inc. in 1969. They were selected because of their pioneering work in the use of epoxies for boat construction, and because each is an accomplished sailor. END_OF_DOCUMENT_TOKEN_TO_BE_REPLACED

The prospect of fiberglassing overhead when laminating the bottom of a hull can be a bit ominous. Any type of overhead work can be frustrating, but the thought of trying to hold fiberglass in place while applying epoxy can produce nightmares for some people. This is especially true if you will be working alone. END_OF_DOCUMENT_TOKEN_TO_BE_REPLACED

Carbon fiber has very high strength-to-weight ratios and higher stiffness compared to many other reinforcing fabrics. These special properties make it ideal for applications in aerospace, automotive, military, and even sporting goods. When combined with a WEST SYSTEM Epoxy it can be used to build high-end composite parts. END_OF_DOCUMENT_TOKEN_TO_BE_REPLACED

I was talking to my friend Blake Rivard about doing something different for his motocross bike. We settled on a carbon fiber airbox (air filter cover). On his bike, the airbox sits just below the handlebars where the gas tank usually is. I started with removing the plastic piece and cleaned it so no dirt would be present in the final product.  The original airbox would serve as a mold for the finished piece. END_OF_DOCUMENT_TOKEN_TO_BE_REPLACED

Big Jon (BJ) serves as a reel for retrieving and letting line attached to floating planer boards in and out from a boat while trolling. Planer boards are used to get fishing lures off to the side of the hull so the lures aren’t following directly behind the boat while trolling for walleye. The further the planer board is reeled out, the further the lures are from the side of the hull. BJ has served Tom and Lorraine Klinski well but recently developed some cracks in what appears to be a black nylon plastic. END_OF_DOCUMENT_TOKEN_TO_BE_REPLACED

I teach mechanical engineering at Hartland High School in Hartland, Michigan. As summer approaches, keeping students interested in learning while wrapping up the school year can be a challenging task. My students learn the principles of technical design while guiding through a fun, hands-on, year-end design project. END_OF_DOCUMENT_TOKEN_TO_BE_REPLACED

It’s a myth that if you plan to gel coat over a repair, you must make the repair with polyester. We’ve used gel coat over epoxy for decades, shown it in our instructional videos on repairing fiberglass boats, and discussed it in past issues of Epoxyworks. END_OF_DOCUMENT_TOKEN_TO_BE_REPLACED

At the end of the season this year while riding in a local terrain park, I misjudged the approach to a pipe and ended up crashing the nose of my snowboard into the end of the pipe. Fortunately, I was able to ride away from the impact. Later in the day, I noticed that the nose of the snowboard had been deformed. When I got home, I studied the damaged area closely and determined that it was not safe to ride the board in that condition. The entire nose area had become soft and flexible because much of the wood core in that area had been broken. In addition to the bent nose edge, the top sheet had cracked. Left as is, this would have allowed water to penetrate to the core of the snowboard which would have made it unrepairable. The technicians at my local snowboard shop told me it could be repaired but cautioned that I needed to use an epoxy that remains flexible after it cures to prevent the repair from breaking. END_OF_DOCUMENT_TOKEN_TO_BE_REPLACED

I begin a two-part series that will feature a custom boat project being built by Van Dam Custom Boats in Boyne City, Michigan. We featured a Van Dam-built boat in Epoxyworks 14, the beautiful and unique Alpha Z. We want to give our readers a glimpse into what is currently happening at this world-class boat shop. END_OF_DOCUMENT_TOKEN_TO_BE_REPLACED