…For an Unconventional Adventure Canadian Canoes has been building wood-strip epoxy canoes for some 35 years. We’ve produced many thousands of western red cedar canoe strips from clear planks which originated in British Columbia. Eventually, we realized that ripping the strips one at a time then adding on the bead and cove profiles was terribly inefficient. With valuable input from Peter Feindel from Taurus Craco Woodworking Machinery, we used a milling machine to produce consistently accurate canoe strips. What once consumed five hours of monotonous work producing the strips for one canoe now takes about four minutes on the milling machine. This huge increase in production allowed us to offer, along with Ted Moores and Joan Barrett from Bear Mountain Boat Shop, canoe and kayak building kits for home boat builders.

In February of 2011, a gentleman in Milan, Italy ordered our 17′ Nomad kit. He launched the boat on a beautiful lake near the Swiss border with towering mountains as a backdrop. Shortly after, he told me about a traditional trade route from Venice to Milan when the Venetians controlled the trade of goods, mainly spices, from the east and south. He asked if there was any possibility of some Canadian paddlers joining him in paddling the Ticino and Po Rivers from just below Milan to and through the Grand Canal of Venice itself.

Around that time, our friends and colleagues at Bear Mountain Boats were reporting that they had several inquiries about plans for a reproduction North Canoe, not in birch bark but in wood strip epoxy construction. It was not a great leap to the possibility of combining the suggested canoe route with the much larger North Canoes as the craft to be used on this paddling adventure.

Another friend and colleague, Glenn Fallis who operates Voyageur Canoes in Millbrook, Ontario, has been making similar canoes in a fiberglass and resin matrix for many years. In addition to the 26′ North Canoe, Glenn and his workers make a 36′ Montreal Canoe. When I outlined the trip and project to him, Glenn generously provided a significant amount of offset data which went into naval designer Steve Killing’s design program. Steve then produced image renderings and CNC files which would allow us to make the station molds.

I promoted this adventure to find a group of a dozen or so friends and colleagues to join my wife and me in building these canoes, providing training, shipping the canoes to Italy and paddling the 400 kilometers to Venezia. To our great delight, a group materialized. (Along with some of their hard earned spending money!) Fourteen people have signed on to the voyage.

Glenn Fallis produces North Canoes as a composite product. Because our background is in woodstrip construction and we wanted to offer these canoes as kits, we invited Bear Mountain Boat Shop to get involved. Bear Mountain helped popularize the construction of strip-built canoes sheathed in fiberglass cloth and epoxy, and are a resource to many home boatbuilders for boat building kits, plans, instructions, how-to videos and classes. Our version of these North Canoes employs woodstrip construction with epoxy.

In October 2102, Voyageur Canoes cut 12 sheets of 5/8”-thick high-density particleboard on a CNC machine to produce the station molds for this project. It took a long Saturday work session to assemble all the segments then attach them to a floor-mounted oval. We built three North Canoes in four different spaces (which is why the background scenery is inconsistent in the photos). The image below shows a black floor platform and a series of leveling bolts. The floor in this shop was not flat so we made and leveled this platform then assembled the floor oval and all the station molds. High-density particle board ebing cut on a CNC machine to produce the station molds. Station assembled and leveled with leveling bolts (where indicated by white arrows). Bending the stem pieces around the mold. Strips being applied to the stem of the canoe.

One of the first tasks in woodstrip boat building is to use steam and muscle to bend the stem pieces around the stem stations. These canoes follow the same process, but there are many more laminations and heftier pieces.

Preparing the strips of wood turned out to be a lucky opportunity for us. Generally, we produce long, clear strips of red cedar as our customers are looking to have a handsome craft with all the graining and colors red cedar displays. In our case, the hull was going to be covered with 10 ounce cloth, WEST SYSTEM 105 Resin/207 Special Clear Hardener with 3% pigment added to simulate the inner bark of the white birch. Over the years, Ted and I had accumulated a good pile of shorter lengths of eastern white cedar which had limited applications in our shop processes. We had a substantial pile of 15′ planks. We ripped and planed these to ¼” x 7/8″ then we used our routers to add the bead and cove profiles to the edges. Profile gauges for shaping the stem. One of the real challenges was to create the somewhat triangular shape of the stems; this process creates a flat place for the canoe strips to connect to when they “land” on the stem. On all of our other watercraft, the stem is very accessible and the fairing process can be done mostly with the builder standing upright. But the North canoes have their stems tucked under and located about six inches above the floor. Our first canoe was shaped/faired using the conventional fairing batten and block plane. (After a mere seven visits to a chiropractor, my spinal column was realigned.) This was a valuable lesson. We asked Steve Killing to create some magic for us and he produced drawings which allowed us to cut a series of profile gauges, which made it possible to shape about 90% of the stem on the workbench. What a difference!

Adding the many rows of bead-and-cove strips progressed quickly with a team of four. On one occasion, we were able to attach 26 rows on each side of the molds. The hull of the second canoe was filled in and awaiting fairing with block planes followed by a machine sanding with 80-grit discs and a final hand sanding with 120-grit paper. 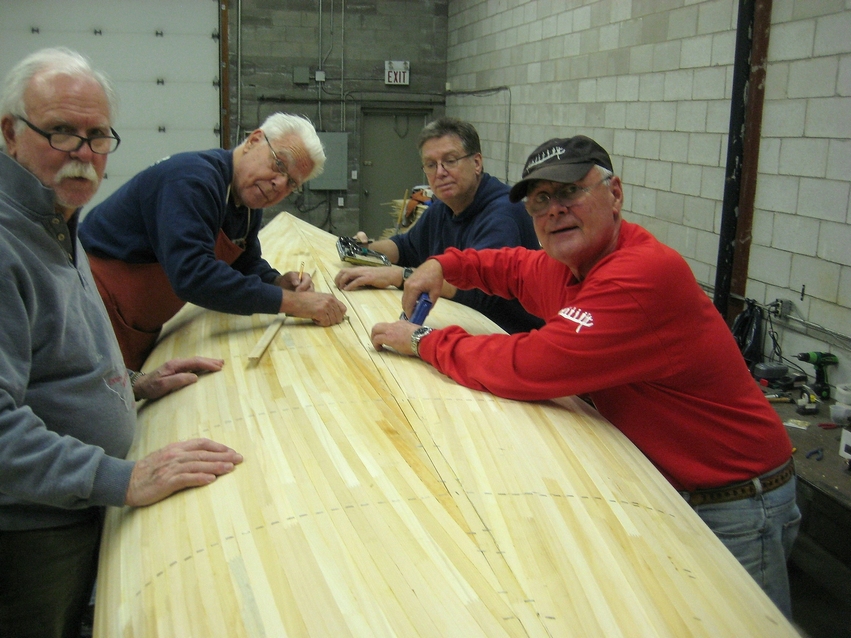 Adding the rows of bead-and-cove strips to a North canoe.

Once the hull was well cleaned, we ran full-length sheets of 60″-wide 10-ounce fiberglass cloth overlapped along the midline. We then began the long process of applying three coats of WEST SYSTEM 105/207 to saturate the cloth while bonding it to the hull and filling the weave. We were not going for a clear finish, and added white pigment at 3% by volume to each batch of epoxy and brushed this coat onto the cloth. With appropriate waiting periods between coats, it took about six hours to apply three coats of mixed epoxy with the pigment. 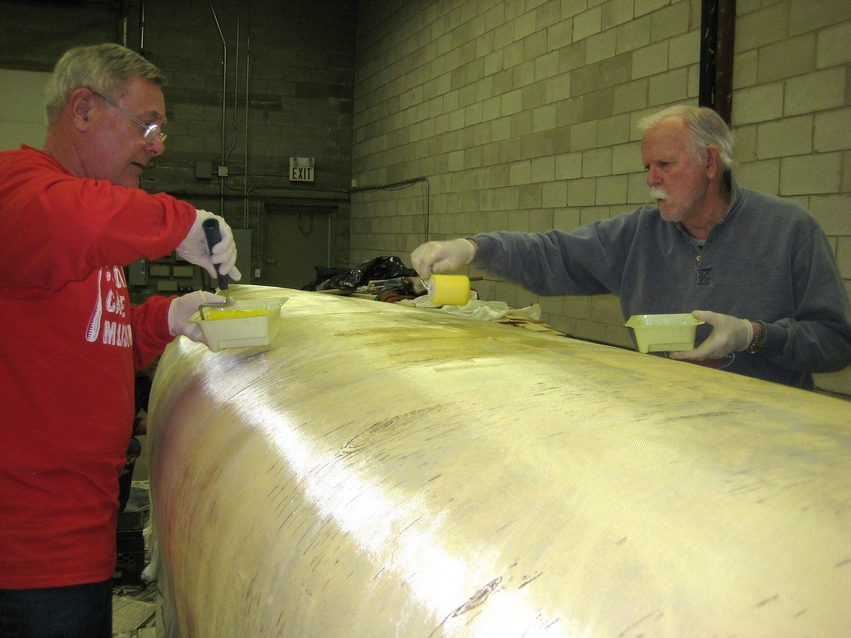 Painted with a birch bark pattern, the North canoe receives another coat of epoxy.

To simulate birch bark, we added slightly overlapping layers of 50″ wide 6-ounce cloth with Glenn Fallis’s cleverly painted bark pattern. We then wetted out the top layer with two coats of WEST SYSTEM 105/207 epoxy. That was one very long day. Patiently applying the curved end sections to the North canoe.

Next, we lifted the hull free of the molds and turned it right side up for the first time. After scraping the interior with curved paint scrapers, we sanded it by machine and hand. All this was in preparation for laying in more 10-ounce cloth and then wetting it out with tinted epoxy.

Once the interior epoxy coats cured, the canoes became noticeably stiffer. It was ready for us to add the trim elements. Steve Squelch was a patient worker when it came to installing those sweeping curved end sections, which proved to be very challenging to complete. When those were in place, we attached the remaining sections of the inner and outer gunwales. This is one situation where the builder cannot have too many clamps.

By early spring 2013, the North canoes were fully constructed, with only some decorative features to be completed. The canoes were all decorated by mid-June and have been paddled regularly. We added pour-in-place foam chambers at both ends and submerged the canoes to test the efficiency of all the flotation.

As this article was being prepared in mid July 2013, the canoes were secured inside a steel container somewhere on the Atlantic Ocean, headed for the Port of Genoa and then on to Milan to await the arrival of the paddling teams in early September. The Ticino and Po Rivers and the Lagoon of Venice and finally the Grand Canal in Venice now await us. This is certain to be a most unconventional paddling adventure. A traditional voyager salute in a successfully completed North Canoe.