Aircraft designer and builder Jon’s Staudacher’s newest project is a wooden enclosed trailer for his new race car. Jon designed a trailer to be suitable for hauling his race car and living in over a weekend at the race track. The trailer was built by scarfing and gluing together individual pieces of wood to form a beautiful natural wood finished race car trailer. Jon always surprises me with how innovative he is with projects. After Jon built an open-wheel race car he had a design in mind for a new plywood trailer. The enlcosed trailer consists of ¼” Baltic Birch plywood sides with reclaimed southern yellow pine boards for support ribs. The southern yellow pine boards that he used came from a local high school’s bleachers.

The plywood was scarfed together on Jon’s long strongback (long, flat table) to create all the sides of the trailer. Three coats of WEST SYSTEM 105 Resin and 207 Special Clear Hardener were applied to the panels while they were horizontal on sawhorses, making it easy to work on.  Vertical grain Douglas fir boards were bonded to the top and bottom of the sides of the trailer. The inside of the trailer was bright finished, and the natural wood imparts a pleasant feeling inside the trailer and just makes you feel good.

Jon’s races are over weekends throughout the summer, so making the trailer comfortable to use was pretty much a necessity. Building the trailer low to the ground compared to an aluminum framed enclosed trailer helps significantly when singlehandedly loading and unloading a racecar that has only 1.5” of ground clearance. Also keeping the floor of the trailer low to the ground is nice when walking in and out over an entire weekend.

The floor is made from ½” Baltic Birch plywood with a laminated 8’ southern yellow pine tongue lag bolted through the floor. The roof consists of 4 mm Okoume plywood with Douglas fir strips to increase stiffness and support. The advantage of using epoxy is its ability to seal the wood and waterproof everything to prevent water from leaking in, while traveling down the road or parked at the track. 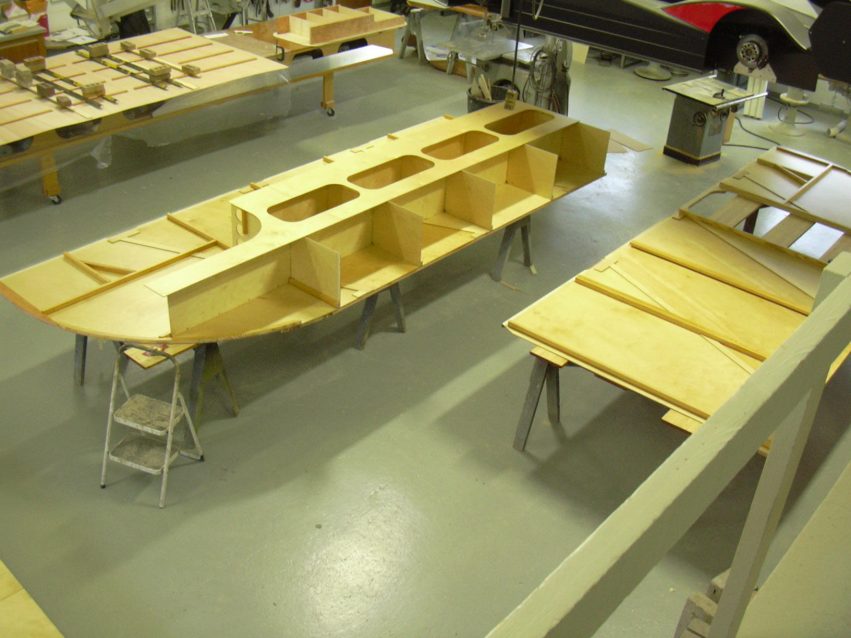 Three 12” diameter holes were cut into the top as skylights made out of polycarbonate.

Storage compartments were built on one wall side to make it convenient for hauling any tools or hardware needed at the race track and also served to strengthen and stiffen the sides of the trailer significantly. Jon built an area in front of the trailer that was boxed in to haul two sets of spare tires; it also had a plywood top that was hinged to convert into a bed. 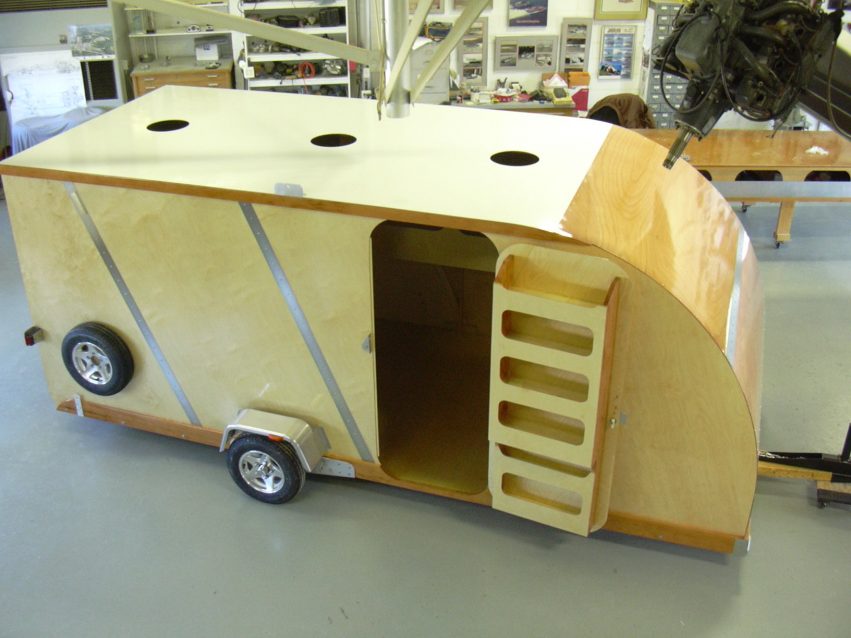 The hinged door was designed to have storage compartments to haul any hand tools needed at the race track. The finished enclosed trailer weighed around 1,200 lbs. The enclosed trailer was finished by spraying Jon’s favorite automotive clear coat after all the pieces of the trailer were glued together. It’s not a lie when I say, “Jon’s wood race car trailer sure turned out really nice.” It’s safe to say Jon’s trailer will turn heads on the road and at the track.