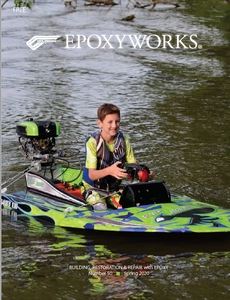 In late 2018, my son and I were given a unique opportunity by the Michigan-based Water Wonderland Chapter of the Antique and Classic Boat Society (ACBS) to build an 8′ MiniMax hydroplane based on original plans from the early 1960s. Almost anything from that era seems to be popular again. Maybe it’s nostalgia or maybe the designs of that groundbreaking decade were just ahead of their time. Either way, the MiniMax’s appeal seems as relevant today as it did in 1962. We accepted the challenge without hesitation. END_OF_DOCUMENT_TOKEN_TO_BE_REPLACED

Another of my projects using WEST SYSTEM was my mailbox post. I was tired of the snowplow trucks knocking down my mailboxes so, as a hobbyist welder, I built a mailbox post out of steel using square tube, box tube, and angle iron. I wanted the post to look like wood. END_OF_DOCUMENT_TOKEN_TO_BE_REPLACED

I restored my 1837 Eli Brown rope tension drum using WEST SYSTEM® Epoxy to repair a longitudinal crack running about a third of the way around the drum shell. END_OF_DOCUMENT_TOKEN_TO_BE_REPLACED

On Wednesday, June 20, 1979, while sailing in a qualifying race for the OSTAR (Observer Single-Handed Transatlantic Race, originally named after its first sponsor, the British Observer newspaper1), Jan Gougeon’s self-designed and built 31’ trimaran FLICKA was capsized by heavy seas in the North Atlantic. Jan survived on the overturned plywood/epoxy multihull for four days before he was rescued by a passing freighter. The following is the transcript of a phone call between Jan, his brothers Meade and Joel, as well as fellow multihull designer/sailor Mike Zuteck. Their discussion takes place on June 26, 1979, just hours after the freighter that rescued Jan from FLICKA and delivered him to dry land. END_OF_DOCUMENT_TOKEN_TO_BE_REPLACED

“Should I use the 105 System or G/flex® Epoxy for my project?” This is a great question. Here’s what a Technical Advisor thinks about when recommending one type of WEST SYSTEM® Epoxy over another. Let’s start by comparing the handling characteristics and mechanical properties of both the 105 System and G/flex. This will show you the advantages of each and when one system is better suited over another for your project. END_OF_DOCUMENT_TOKEN_TO_BE_REPLACED

When our team of experts select the raw ingredients for WEST SYSTEM® Epoxy products, we strive to achieve excellent physical properties with the lowest possible risk to human and environmental health. There is a safe exposure level for most substances. The more toxic the substance, the lower that level will be. Overexposure occurs when the safe exposure level is exceeded. When this happens, the substance can impact your health. END_OF_DOCUMENT_TOKEN_TO_BE_REPLACED

Many products, especially boats, are now being manufactured with a process called Vacuum Assisted Resin Transfer Molding (VARTM), also frequently referred to as infusion. The main topics of this article are: what infusion is, how to repair an infused part with vacuum bagging vs. infusion, and the results of our study comparing a vacuum-bagged repaired laminate and an infused repaired laminate. END_OF_DOCUMENT_TOKEN_TO_BE_REPLACED

After a few years of racing on the J22 This Little Piggy, the owner was ready to take a step back and gave me the first option to purchase it. I took advantage of the opportunity. As with many boats I’ve owned over the years, the first couple winters I plan on spending money upgrading and doing repairs. Not that a lot has to be done, but a few changes in hardware placement and re-bedding the deck hardware are at the top of my list. END_OF_DOCUMENT_TOKEN_TO_BE_REPLACED

Small communities benefit when local groups work together to produce results greater than the sum of their individual efforts. Three organizations combined their efforts to create such synergy in a coastal county on Lake Huron. The Iosco County Family Court, local Elks Lodge 2525 and Heritage Coast Sailing and Rowing (HCS&R) combined efforts to develop a positive training program for youthful offenders and provide a staunch safety boat for the new not-for-profit sailing school. END_OF_DOCUMENT_TOKEN_TO_BE_REPLACED

Nonskid surfaces may need to be replaced because they are worn down from years of use, or were removed during a deck repair. If you want to match an existing pattern, flexible molds are available for matching a production boat non-skid pattern or for use if a molded appearance is desired. Molded non-skid surfaces are often very open making them easier to clean and they have a more finished appearance (See Epoxyworks 22, “Repair Non-Skid and get Professional Results”).  For applications where it is not practical to use molds, or a simple and functional non-skid surface is desired, there are some easy options. END_OF_DOCUMENT_TOKEN_TO_BE_REPLACED