A Little Less Than Meets The Eye is a 9′ x 7′ x 6′, Fiberglass and polished aluminum sculpture installed at Raleigh, North Carolina, Art on City Plaza.

Bill Wood has been making sculptures since high school. He has a degree in Art from Ottawa University, Ottawa, Kansas and attended the Kansas City Art Institute, Kansas City, Missouri. His work has been featured in shows from Connecticut to Key West and as far west as Topeka Kansas. END_OF_DOCUMENT_TOKEN_TO_BE_REPLACED 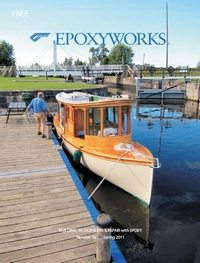 Sparks is designed for low-speed cruising while using the least amount of fossil fuel possible. It normally runs on batteries charged by solar panels and shore power. When necessary, a diesel generator powers its electric motor and charges its batteries. END_OF_DOCUMENT_TOKEN_TO_BE_REPLACED

Above: At Bates Technical College, their vacuum infusion project is still in the tooling stages. Student Shawn Hanna fairs the hull plug—a labor-intensive job and a tough one to get the students to focus on.

Boatbuilding instructor Chuck Graydon of Bates Technical College sent these photos of some projects that its students have been working on using WEST SYSTEM® Epoxy.

Above: A 72′ wingspan reproduction of the 1914 Curtiss flying boat America was completed by the Curtiss Museum’s restoration shop crew in early September 2007.

Glenn Curtiss is recognized as the “Father of Naval Aviation.” He trained the first Navy pilots and built their first aircraft, the A-1 Triad Amphibian. It was “Curtiss Pushers” in 1910 and 1911, that demonstrated capability to take off and land on a ship, leading to the development of aircraft carriers. END_OF_DOCUMENT_TOKEN_TO_BE_REPLACED

Above: The legendary commuter yacht THUNDERBIRD, underway on Lake Tahoe. She was built at Huskins Boat Works in Bay City, Michigan, which later became the manufacturing site of WEST SYSTEM® Epoxy.

A little history lesson. Last year a cousin of the Gougeon Brothers, David Huskins and his family, visited the Thunderbird Lodge on Lake Tahoe. He sent us a couple of photos of Thunderbird, the legendary commuter yacht designed by John L. Hacker in 1939. It was commissioned by George Whittell and built by Huskins Boat Works in Bay City, Michigan. END_OF_DOCUMENT_TOKEN_TO_BE_REPLACED

Above: A colorful clay relief kitty by Christopher Tully.

Artist Christopher Tully does two unusual things with epoxy in his work. He creates large clay relief scenes with lots of detail made up of many tiles. After they are bisque fired he brushes on epoxy and heats them with a torch so the epoxy penetrates deeply into the porous clay. This creates an extremely strong surface that still has great detail. He then applies a primer and paints it with acrylics and a clear coat. END_OF_DOCUMENT_TOKEN_TO_BE_REPLACED

For over fifty years, “Sparty” has been a familiar figure on the campus of Michigan State University in East Lansing, Michigan. The Spartan statue was built in 1945 and, at 11′ tall and 3000 lb, it is believed to be the world’s largest freestanding ceramic sculpture. Sparty has survived many an attack by vandals, but it is no match for Michigan winters. END_OF_DOCUMENT_TOKEN_TO_BE_REPLACED

Last summer I used WEST SYSTEM® Epoxy to repair a small section of rot in a rough sawn cedar trim board on my house. Before gutter was installed, the trim board was wet frequently, but well ventilated. Only a narrow center section of the #2 grade, 1″×12″ board seemed to be vulnerable. END_OF_DOCUMENT_TOKEN_TO_BE_REPLACED

Tom Pawlak and I had the opportunity to visit I Hodgdon Yachts Inc. in East Boothbay, Maine to view the progress on the 124′ Bruce King designed yacht, ANTONISA while she was under construction in 1998. END_OF_DOCUMENT_TOKEN_TO_BE_REPLACED

Just an hour after the hot air balloon took off from a quarry in Illinois, a helium cell in the balloon burst at 21,000 feet. Two hours later the 165′-tall balloon with its carbon fiber gondola landed in an Indiana cornfield. After bouncing and skidding across the snow-covered field, the capsule, with Kevin Uliassi safely tucked inside, snagged an irrigation rig, finally bringing it to a halt. END_OF_DOCUMENT_TOKEN_TO_BE_REPLACED