My garage was full of projects in various states of completion or abandonment. The sailboat was in the driveway, cocooned in a tarp. I had a desperate need to build a kayak. The neighbors were much too complacent. The time was right to build a blue tarp shelter.

I decided to build a 32’ x 14’ shelter so I could house the 25’ sailboat plus have room for the kayak project. The layout suggested bents or frames every 4’. The design developed into a standardized frame of two 10’ lengths of 1″-diameter conduit for rafters and half-lengths (5’) of conduit for the uprights. Conduit connectors would hold the pieces together. I initially considered ¾” diameter conduit but decided it was not stiff enough for the job.
For each of the nine frames, I bent two pieces of conduit to a 135° angle at both ends. This had to be done carefully to assure that the bends in each piece of conduit were in the same plane. We have a conduit bender at the shop, so this step was easy. Not everyone has one sitting in the corner of the garage or basement, but it is worth the half-day rental fee.

Sills are treated 2x6s with cleats, with 2×4 blocks drilled to accept the 1″ conduit, screwed on top. I set up my structure on a concrete apron and decided against securing the foundation to the concrete. I used 14’ 2x4s, on the flat, as cross pieces at the ends and in the middle to hold the spacing of the sills.

The plate is a 2×2 stringer secured to the frames. I stabilized and spaced the tops of the frames with a 2×2 ridge pole stringer and installed 2×4 wind bracing and plywood gussets to complete the structure. I used conduit brackets to secure the conduit frames to all the wooden structural members. The whole armature remained fairly flexible until I secured the tarp.

For the 32’ x 14’ shelter, I located a 40’ by 24’ tarp. Small eye-bolts in the sill served as attachment points for hold-down lines strung through the tarp grommets. The extra length and width of the tarp served as half-walls to keep out the driving rain.
I also installed two inexpensive 4’ double-bulb fluorescent fixtures up in the peak to provide light and serve notice to mosquitoes that some poor soul using epoxy was an easy target.

The shelter performed very well. While a row of trees buffered the structure from the prevailing wind, it held up very well in several intense storms that came in on its unprotected side. In one storm the shelter was moved about 5 feet as a unit, and suffered no damage despite taking out a security light attached to the garage.

The pitch of the frames and the slickness of the poly tarp helped the structure shed all but the stickiest snow. The tarp lasted about one year until UV damage and wind chafe caused holes to form at the peak. I pulled another tarp over the top of the first, re-lashed all the lines, promised the neighbors this wouldn’t go on forever and went back to the boat project of choice. 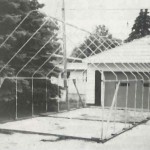 The completed framework, minus the tarp 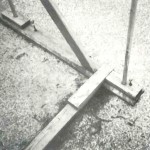 Detail of the sills, conduit blocks and eyebolts used to hold the tarp 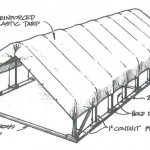