On a Farrier Trimaran 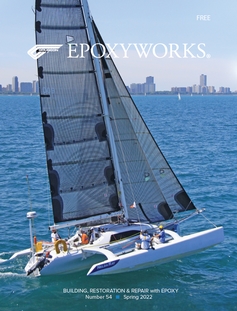 I received a call from a friend of mine who owns a 2004 Farrier F33RX folding trimaran, the 33′ Nelda Ray. This sailboat is a frequent competitor in regattas on the Great Lakes. The aluminum mast step was compressing the deck and causing laminate failure. I told my friend I’d figure out what went wrong and then fix it so it would never happen again. I’ll outline the process I used to make this successful repair.

Before I started the repair, I covered the boat inside and out with a layer of 5-mil plastic sheeting in order to keep things clean. I left exposed only the areas that needed surface preparation. I used painter’s tape to seal the plastic film along the edges. Working as neatly and cleanly as possible helps me to manage my time and make repairs efficiently.

The first step in this repair was to find out why the laminate had been compressed to the point of failure. To investigate, I removed the aluminum mast brackets from the mast step and examined how the deck was constructed. Using a router with a plunge tip bit cutter, I removed a portion of the deck but left the inner fiberglass skin intact. This made the problem easy to see: the laminate damage occurred because the load was too great for the core.

The deck had been fabricated with a few layers of lightweight fiberglass over high-density foam core, with minimal layers of fiberglass inside of the hull. The high loads from the mast bearing down on the aluminum mast step had compressed the foam core, leading to fatigue damage over the years.

I devised a two-part repair plan that would prevent this failure from reoccurring. The first part required increasing the compression strength of the core. The second part was to strengthen the supporting structure to redistribute loads to the hull.

I began the first phase of the repair by bonding a 5/8″-thick Garolite® G-10 panel (approximately the size I’d removed with the router) in place of the high-density foam core. G-10 is a high-pressure fiberglass laminate that’s manufactured by stacking multiple layers of glass cloth, soaking them in epoxy, and compressing them under heat until the epoxy cures. You might ask “Why use G-10 Garolite® when you could make a fiberglass panel with WEST SYSTEM® Epoxy?” One reason is that I had a time constraint so it was more efficient to order a prefabricated panel. G-10 offered all the attributes I needed for the application, including excellent mechanical properties.

To prevent stress concentrations on the 90-degree angles, I rounded the corners of the G-10 panel and sanded them with 80-grit to prepare for epoxy. For bonding the G-10, I chose Six10® Thickened Epoxy Adhesive because of its gel consistency and toughness when cured. The Six10® was applied to the bottom of the G-10 panel to adhere to the inner fiberglass laminate.

After the Six10® cured, I used a grinder to taper a 12:1 bevel around the perimeter of the outer fiberglass skin on the deck. In order to replace the damaged laminate, I cut five patches of 1708 biaxial fiberglass cloth in graduating sizes. I used WEST SYSTEM® 105 Resin and 206 Slow Hardener® to apply these patches. I made each fiberglass patch ½” smaller in all directions. I wet out the patches with epoxy and applied the largest patch first, followed by four consecutively smaller patches to match the original thickness. I then applied 2-3 fill coats of epoxy.

After the epoxy cured, I sanded the surface smooth with 80-grit. Next, I mixed a fairing compound consisting of WEST SYSTEM® 105/206 thickened with 407 Low-Density filler. Using a plastic spreader, I applied the fairing compound and filled in any low spots. When it cured, I sanded it with 220-grit to prepare for primer. To match the original gray paint on the deck, I carefully mixed black and white paint to reach the correct shade of gray.

With Six10 Adhesive, I epoxied a G-10 panel to the underside of the deck on each side of the daggerboard case. I positioned wooden prop sticks to help hold the panels in place until the epoxy cured. The other panels were butted underneath to better transfer the loads from the deck into the daggerboard case. Once that cured, I used Six10 to create a fillet where the two panels butted together.

The final step was applying four layers of 1708 Biaxial Cloth over the panels. Applying witness marks to the fabric with a felt tip pen helped me place it exactly where it belonged. After fairing the surface with epoxy thickened with low-density fillers, I sanded it smooth and painted it with a flat white paint.

Over a three-week period, there were many starts and stops to complete this project. My friend had a tight deadline for an upcoming race. Working evenings to meet the deadline, it took me about 45 hours to complete these repairs. My friend was very happy with the finished repair and said it looked great. He also mentioned, with the aluminum mast step repaired, he could now put on enough tension to properly tune the rig (which he was not able to do before, due to the damage.)

Following my repair, Team Nelda Ray successfully competed with 93 other boats in the 34th Harvest Moon Regatta. This 150-mile race goes from Galveston to Port Aransas, Texas. Nelda Ray’s crew took line honors and was awarded the Mayor’s Trophy. They went on to take 1st place in the Multihull Gold Division of the 53rd Wurstfest Regatta hosted by the Canyon Lake Yacht Club in Texas.

Jobs like repairing Nelda Ray improve my ability to troubleshoot and give me more experience with WEST SYSTEM products. This in turn allows me to provide better technical support to our WEST SYSTEM customers. 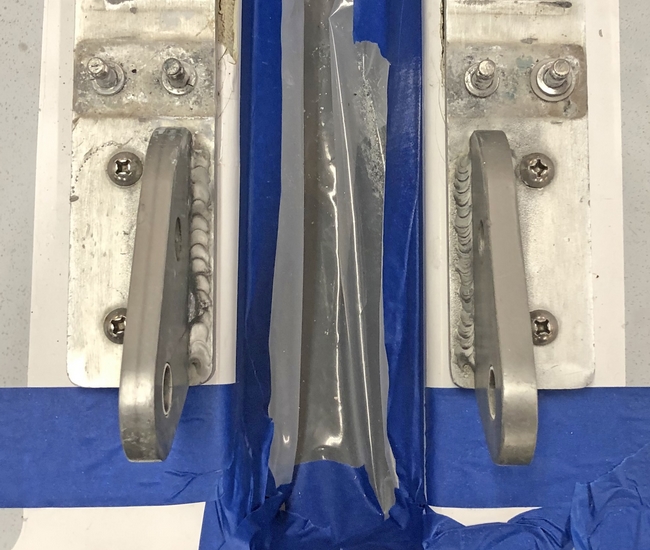 The aluminum mounting brackets on the mast step. 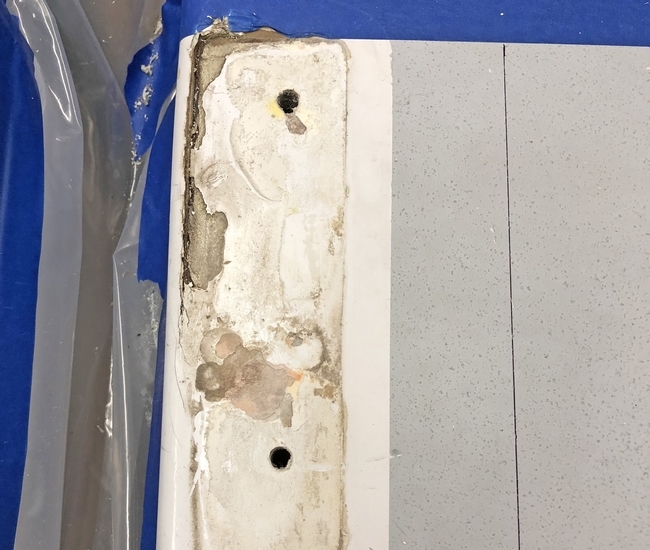 2. The aluminum brackets were removed to evaluate the damage. 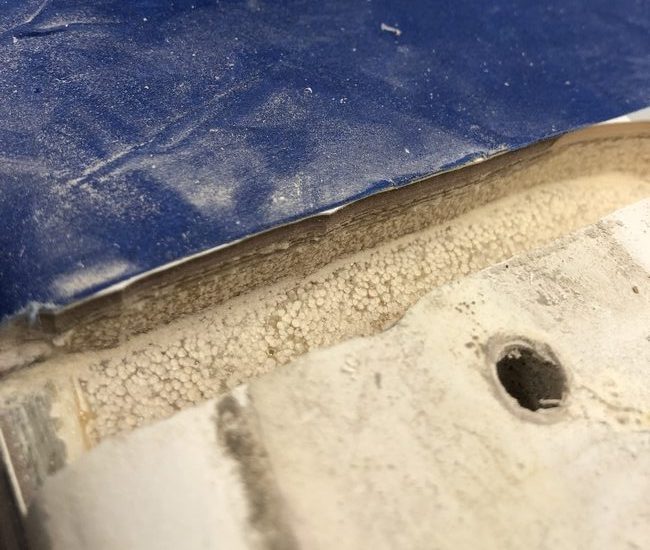 3. A router was the best tool for removing the high-density foam core. 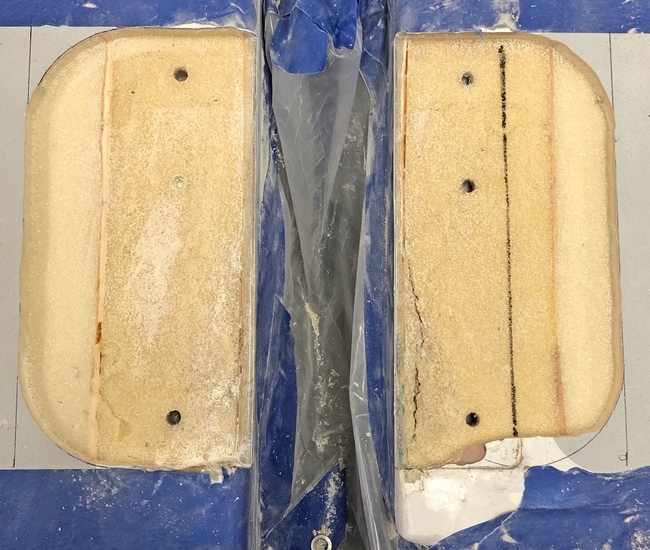 4. To make room for the G-10 panel, I removed the high-density foam with a router. 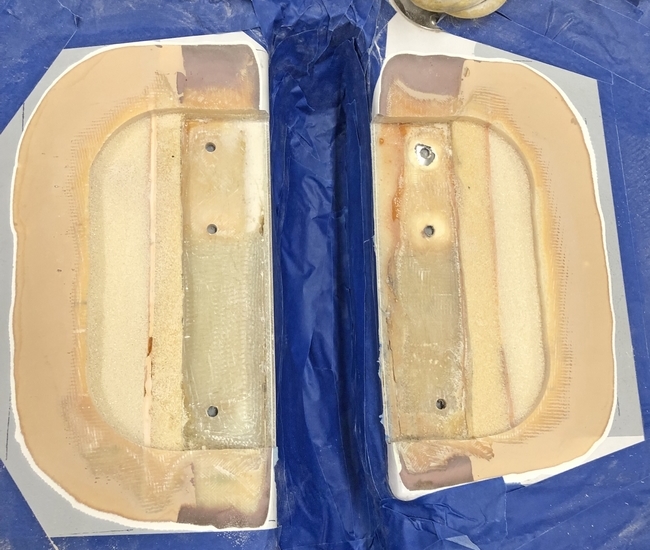 5. The fiberglass laminate was beveled around the perimeter of the cutout area. The foam was removed under the G-10 panel although some foam remained when this image was taken. 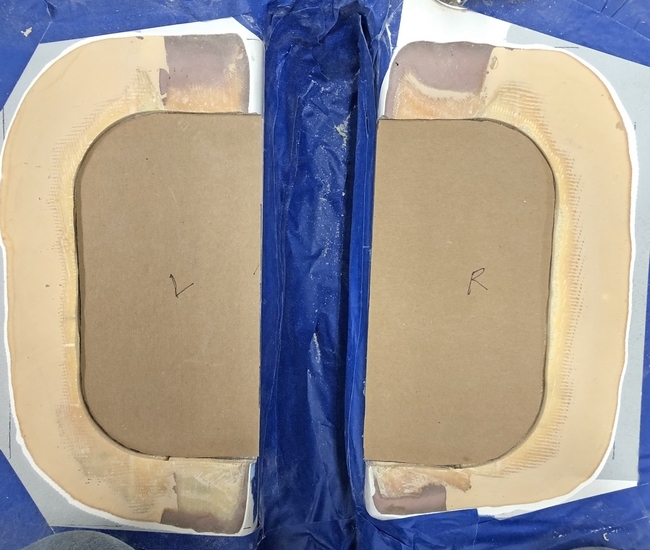 6. Thin cardboard was used to make a template for cutting the G-10 panels. 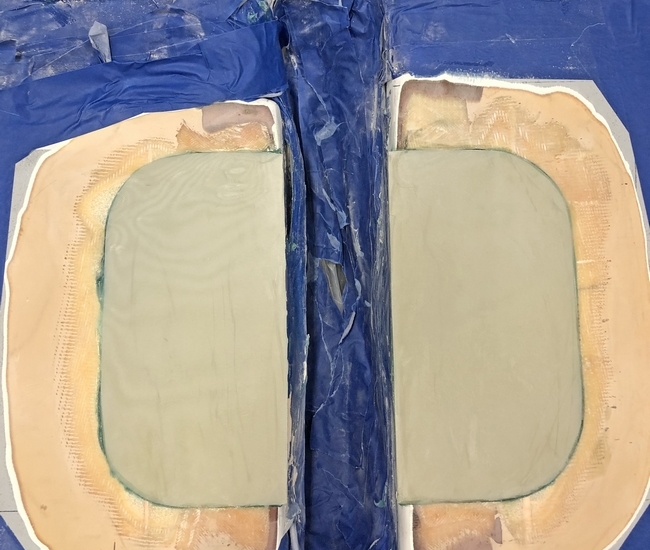 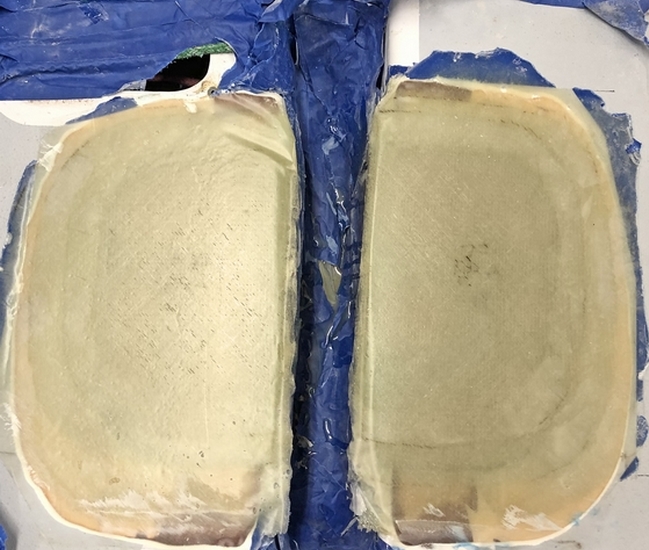 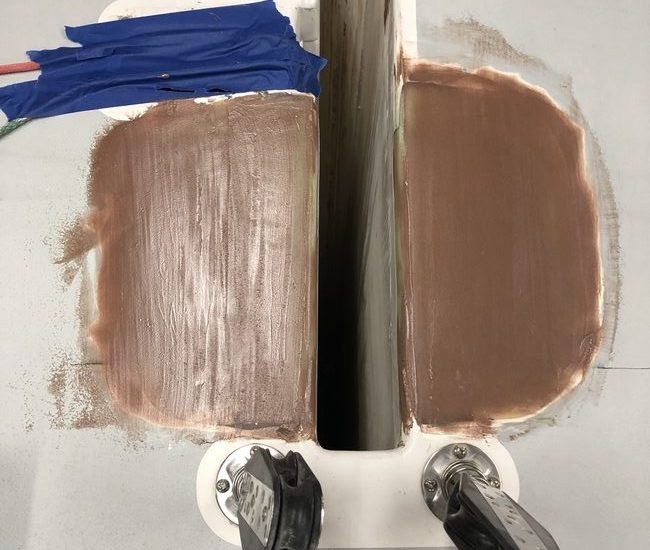 9. WEST SYSTEM 105/206 thickened with 407 Low-Density filler was used to fair the repair with the existing deck. 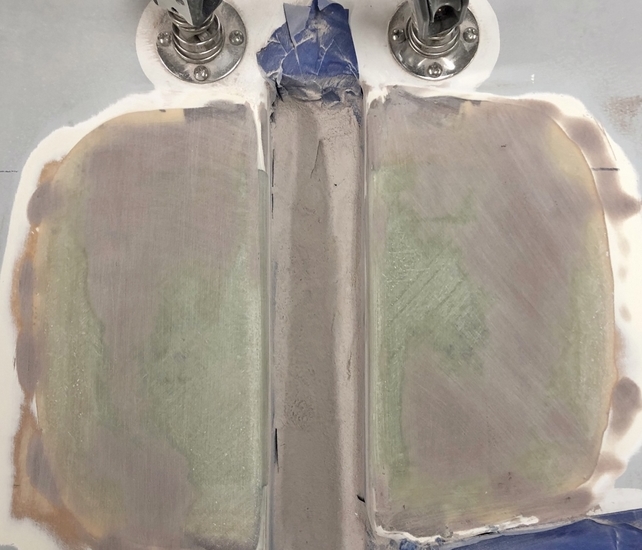 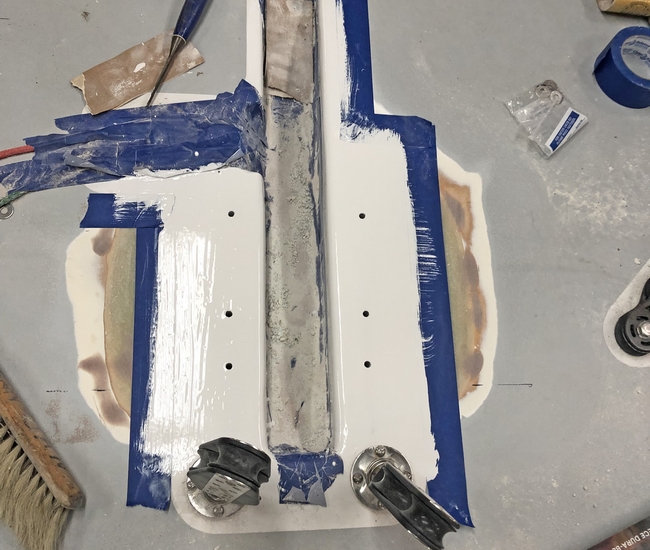 11. The repair area was taped off before applying white paint. 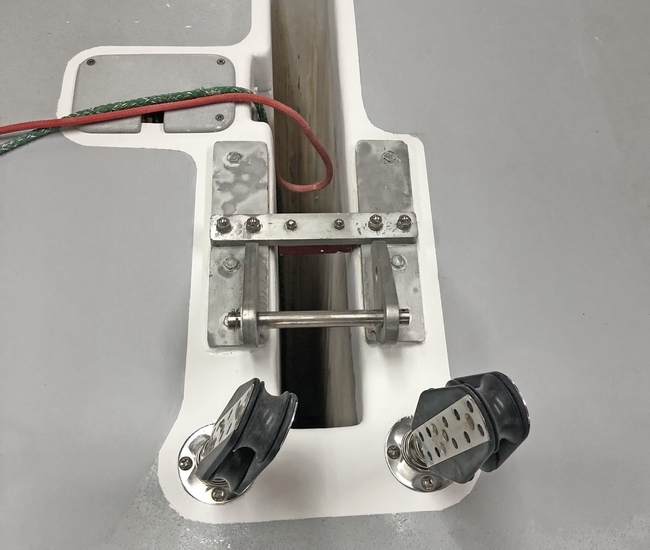 12. The paint, color-matched to the deck color with pigment. 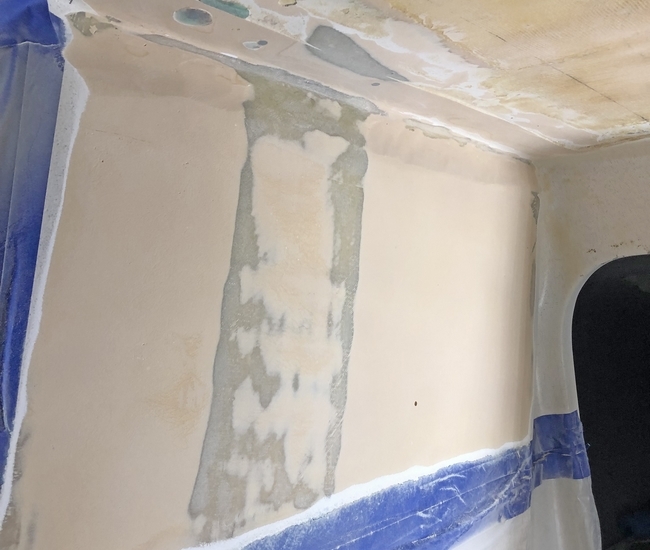 13. 80-grit was used to sand away the paint on the daggerboard case.

13. 80-grit was used to sand away the paint on the daggerboard case. 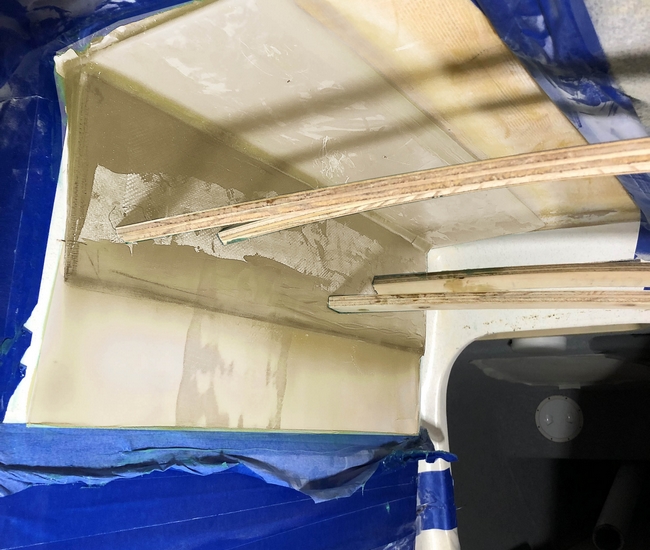 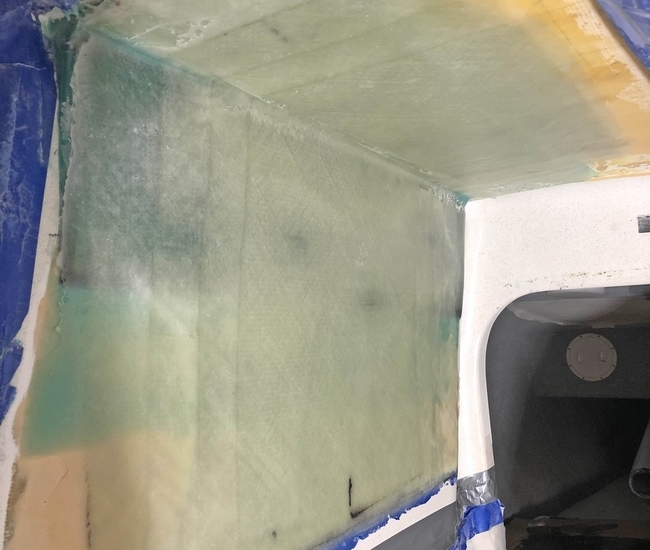 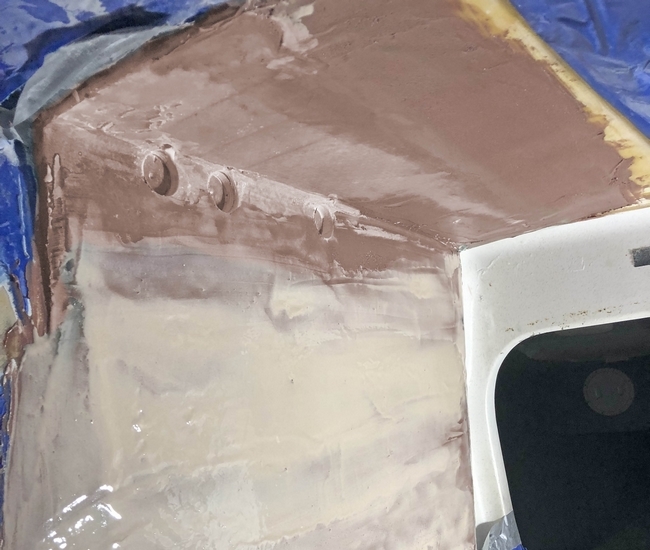 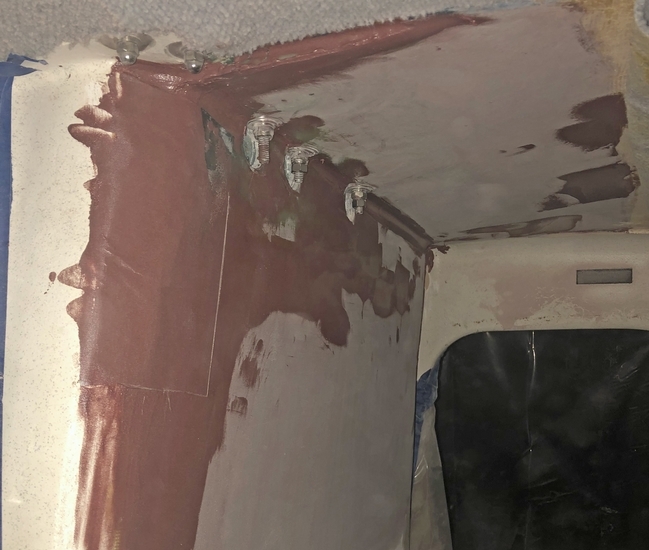 17. Applying the finishing touch-ups with 407 Low-Density filler on the starboard side. 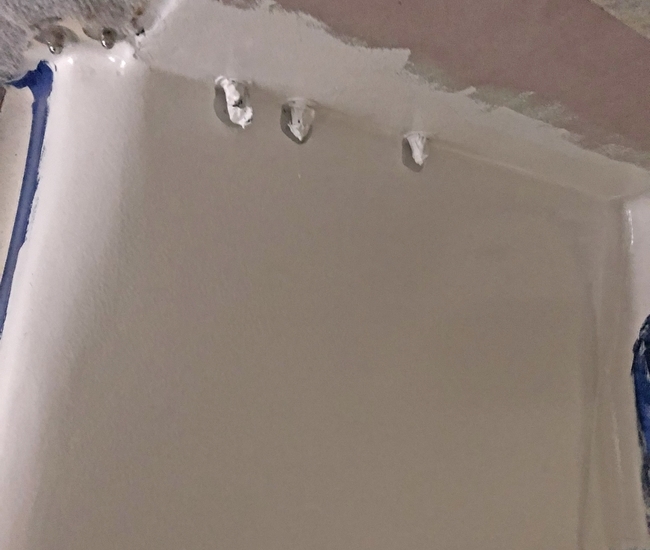 18. The surface was painted with flat white paint to finish the repair on the starboard side. 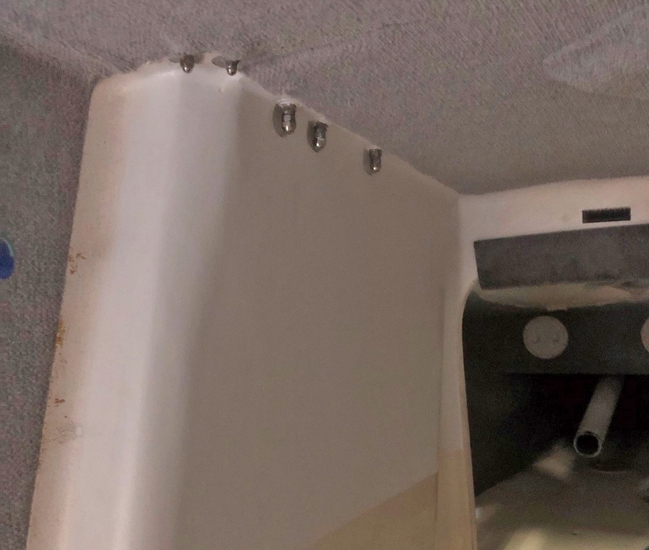 19. The repair, finished with paint on the starboard side. 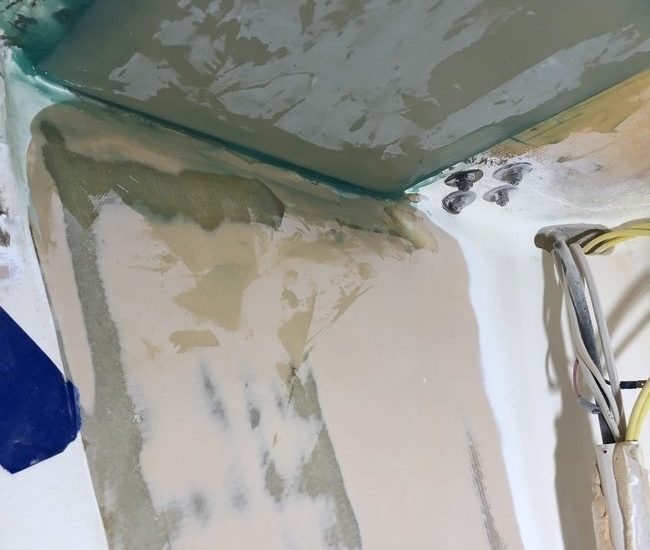 20. The G-10 panel was bonded underneath the deck with Six10 on the port side. 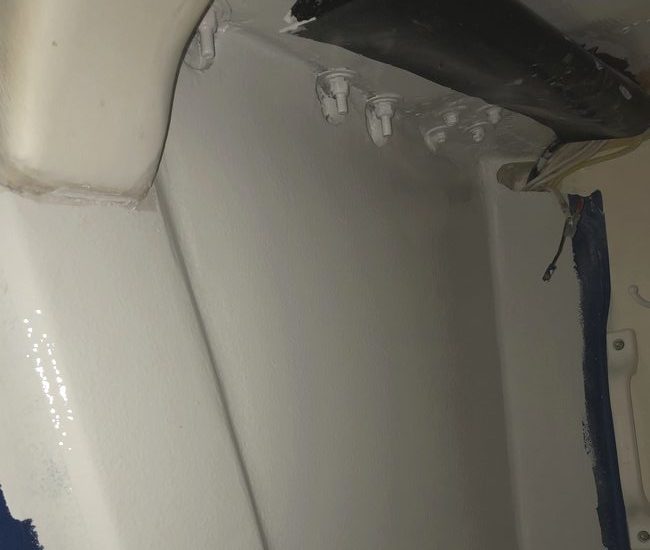 21. The daggerboard case getting a coat of paint to finish the repair on the port side. 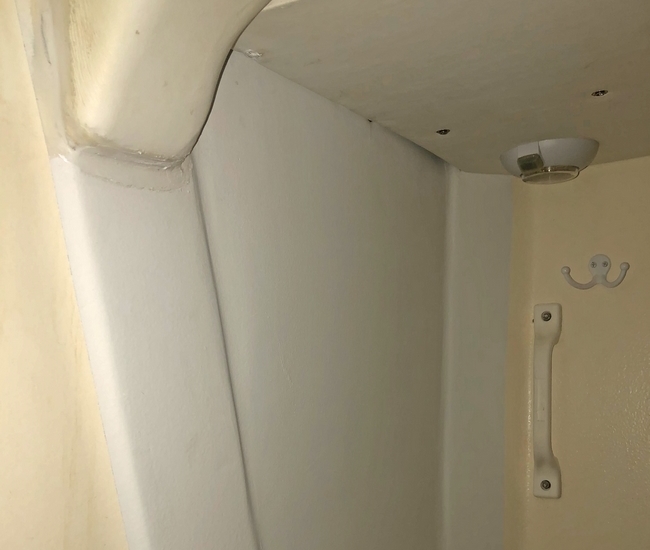 22. The finished repair after the painters’ tape was removed and the interior panel was installed on the port side. 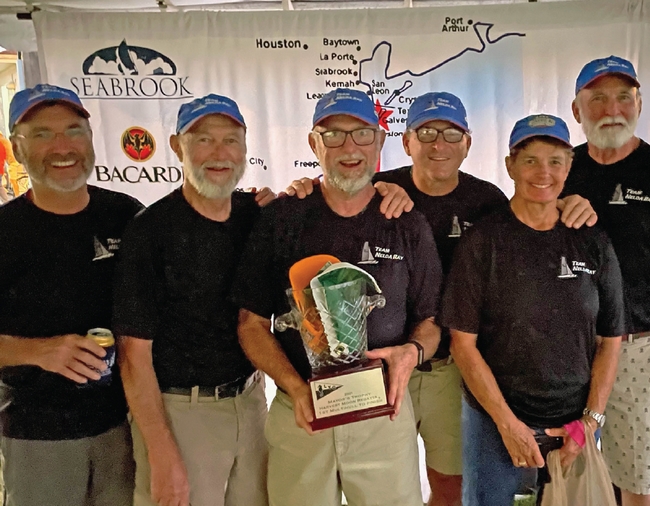