Let’s look at a good method for building curved walls curved-face cabinets. A while back, as I was waiting in the reception lobby of a major American corporation, I had the chance to admire the curved reception desk and other oak furniture in the room. However, when I examined the reception desk more closely, I could see facets in the oak veneer instead of a nice, smooth curve. I immediately realized that the cabinet builders had sawn closely spaced saw kerfs in the back of the panel so they could bend it to shape. I thought there must be a better way.

Building a curved wall with no “kinks” is rarely successful, but Jon’s method turns the job into a no-brainer. No special skills are required, very few, if any, fasteners are needed and the time spent building the wall is shorter than using conventional methods.

The basics of building a curved wall

This curved wall consists of thin plywood glued to standard 2″x studs (or 1″x if the wall is not load-bearing). The plywood is easily bent into smooth, fair curves and the studs provide rigidity. The trick to this process lies in not trying to fasten the plywood to the standing studs. With the conventional method, you almost always have a flat spot at any butt joints and it is tough work trying to force the plywood against the studs, especially if the wall’s curve is concave. With Jon’s method, the studs are bonded to the plywood before the plywood is bent into position. No fasteners are necessary to attach the studs to the plywood.

You need a large, flat surface on which to build the curved wall (the subfloor). Draw a line where the bottom plate will sit on the floor full-size and in the proper location. Measure the length of the wall. (You could calculate the length of the wall, but it is usually more efficient and accurate to draw the wall and take measurements from the full-scale drawing.)

Keep the stud and butt blocks back from the edge. Bond studs with globs of thickened epoxy.

Bond the plywood together

Once you have determined the length of the curved wall, lay enough plywood sheets on the subfloor, butted long edge to long edge, to make the wall. The thickness of the plywood is determined by the radius of the curve you are building. Thin plywood like 3mm for tightly curved walls, heavier plywood for more gently curved surfaces. Apply a butt block strip over each seam in the plywood. This is one area where you may need to use a staple or two. Wet epoxy is slippery and the butt block will slide around unless you tack it in place. Use the same plywood to make the butt block as used to make the wall. The block should be a minimum of a couple of inches wide — enough surface area to keep the joint from breaking when you bend the plywood while making the curve in the wall.

Now you have this great big piece of plywood laying on the floor. It is 8′ high and may be many sheets of plywood wide. The next step is to lay out the stud location on the plywood. Studs are typically set at 16″ centers, so mark the centers of the studs at the top and bottom edges of the plywood. Arrange the stud layout marks so they miss the butt strips. Cut the studs three inches shorter than the curved wall’s height. (An 8′ high wall will have studs that are 93″ long.) This leaves space for a 1.5″ plate at the bottom and top of the wall. If the wall is not load-bearing, use 1″ x 4″ stock for the studs, and if the wall has to support a load (or if the building inspector requires it) use 2″ x 4″ stock for the studs. You do not need to worry too much about bent or bowed studs. As long as the plywood is on a flat surface, the epoxy will take care of any gaps between the stud and the plywood.

Use epoxy like you would use nails—a glob every foot or so to attach the stud to the plywood. Mark the full length of the studs so you can place epoxy where the stud is in the middle of the panel. Mix a batch of resin and hardener. Every foot or so, brush a thin coating of the epoxy mixture on the plywood and on the stud. Then thicken the epoxy with 403 Microfiber Filler to a peanut butter consistency and put a good-sized glob where you have pre-coated with the original mixture. Locating the stud on its layout marks, squish it into the globs of epoxy carefully. You may want to hold the stud in place, with duct tape, bricks, or anything else you have available, until the epoxy cures. You do not need strong clamp pressure—that is the feature of epoxy that makes this whole idea work. As long as epoxy bridges between the face of the stud and the plywood the epoxy will bond them together.

While the epoxy globs are curing, you can saw out the bottom and top plates. These plates will define the shape of the curved wall, so lay them out carefully and saw them accurately. Make each of the plates from two layers of 3/4″ plywood. It is a good idea to stack the plywood four layers thick and cut all four pieces at once. Bond two pieces together to make each plate, and offset any joints you have to make. Use 1.25″ drywall screws to clamp the plates together until the epoxy cures.

Curved top and bottom plates are bonded to the panel assembly of the curved wall with thickened epoxy. 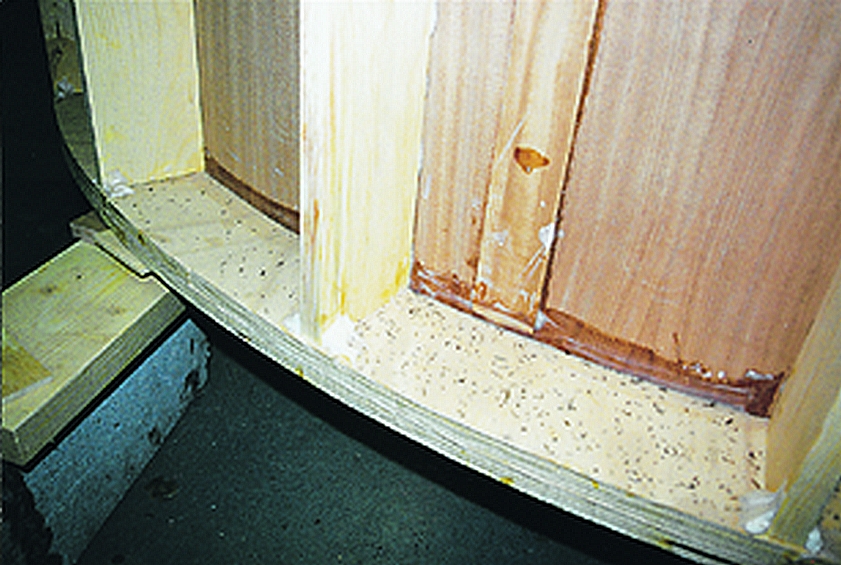 Detail of the back of the curved wall showing 1″x4″ studs, 2″ plywood plates, and a plywood butt block. Keep the butt block 1/5″ shorter than the plywood panel on each end so it will clear the top and bottom plate. 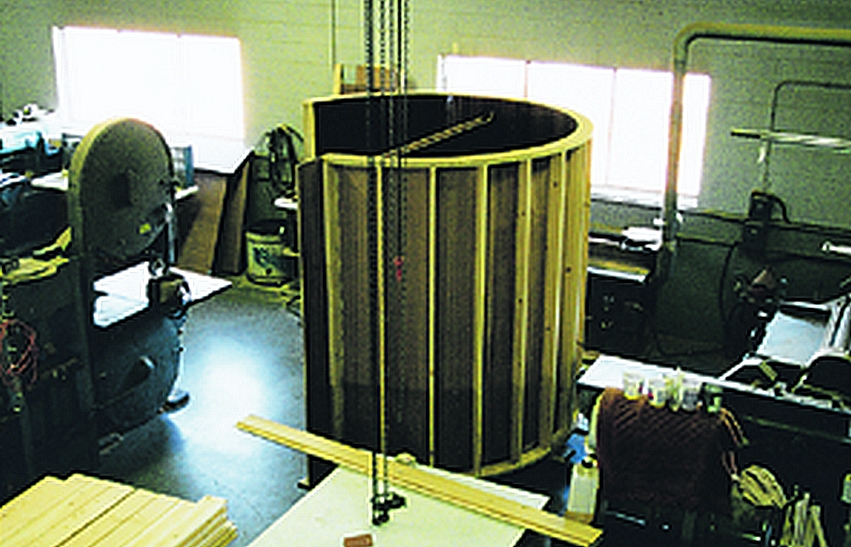 A semicircular shower enclosure is ready for installation. Many of the curved walls for John’s house were built off-site in his shop. When the house is at the proper stage of construction, the pre-assembled walls will be brought in and quickly installed.

Bond the panel to the plates.

You now have a big, flat wall with studs bonded to it and a couple of curved plywood plates that define the shape of the wall. All that remains is to put the two parts together. Depending on how much room you have, you can assemble the wall in the horizontal position or stand up the big panel and assemble the wall in the vertical position. Either way, all you do is clamp the plywood panel to the curved plate. Mix some epoxy and bond the ends of the studs to the bottom plate using the same method as you did to bond the studs to the plywood. Pre-coat small areas where the stud meets the plate, and apply a good-sized glob of thickened epoxy so it is in contact with both the stud and the plate. You can be as neat or sloppy with this operation as you want. Just be sure you have a couple of large globs holding the two pieces together.

When all the epoxy has cured, move the wall to its final location (previously drawn on the floor) and fasten it in place with nails or screws. Apply drywall or whatever finish you want to the plywood surface and the open sides of the studs and you will have built a very fair, smooth curved wall.

Building curved cabinet doors is a variation on the theme described above, only on a lighter scale. There are no fancy molds or presses to build. Jon used the plywood shelves on the back of the door to define the shape of the door and glued the plywood to it—no fasteners are involved.