Salmon growing up in a custom-built progressive ecosystem, ready for release.

The science teacher at the school where my wife works (West Ottawa Macatawa Bay School in Holland, Michigan) called me for help with his leaking aquarium which had flooded his classroom. This was no ordinary aquarium; it was one he had custom-built to show a progressive ecosystem—a brook to a stream to a pond for raising salmon.

After reviewing what was there to work with, we decided to scrap the original tanks and build new ones. It was a good winter project we could complete in our shop and basement.

The science room countertop is 24′ long and the assembled tank would span approximately 21′. The tank system needed to clear the overhead storage and be assembled between sinks and plumbing fittings. A riser system allows access under the tanks for clean up and provides an air space to help keep things dry. The risers also let us place shims to level and align the tanks. 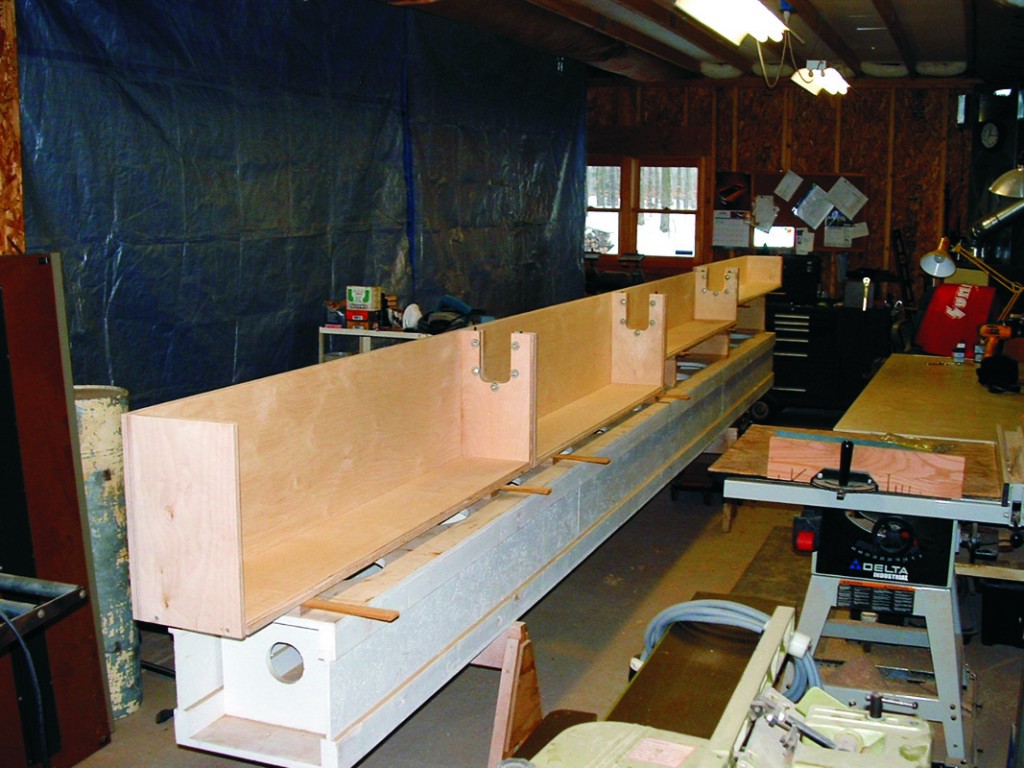 Dry fitting the tanks in the shop. The tanks are built of 1″-thick, 16-ply birch-faced plywood.

It was important to be able to keep the load (water, tank, and seascape) off the bolts which would hold the tanks together, and maintain the pressure on the seal at the pass-through. The bolts, washers, and nuts are stainless steel. Reinforced rubber washers are placed between the stainless steel washers and the epoxy coated tank to prevent marring.

We used 1″-thick high-grade (16-ply) birch faced plywood to construct four tanks. Each was 63″ long, approximately 12″ front to back and varying from 8″ to 15″ deep. There were cut-outs in the ends of the center tanks allowing the fish to pass-through to swim upstream against the re-circulating water pumped from the deep end back to the shallow tank. All the tanks were built to accommodate any lay-out the class may want by capping the pass-thru. They could also separate species by using a screen at the pass-thru as a barrier—this would allow a cascade of water for filtering. 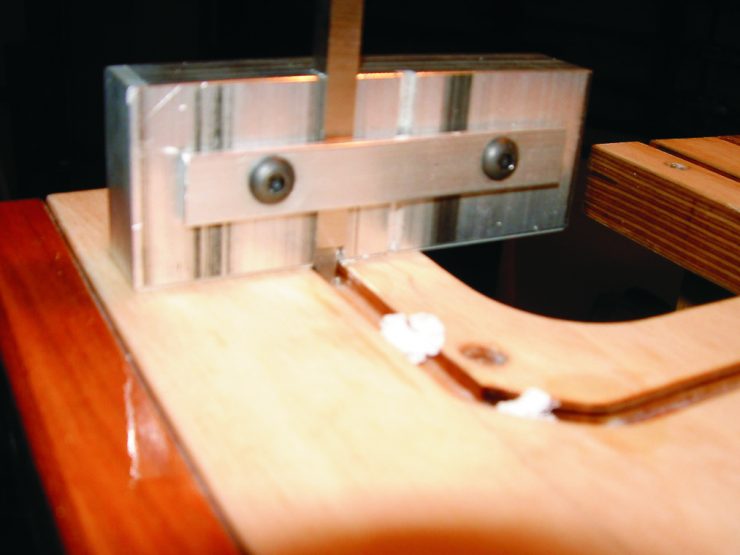 A scraper designed to clean out excess epoxy from the groove that holds the “O” ring. The “O” ring seals the joint between the separate tanks.

Individual tanks were edge-glued with WEST SYSTEM®105 Epoxy Resin® and 205 Fast Hardener® thickened with 403 Microfibers. Stainless steel screws held the panels in position while the epoxy cured. Generous fillets were added in the corners of the panels to improve strength. The open end grain on the plywood panels was allowed to take in as much epoxy as they could to keep the exposed edges sealed. Then we gave the entire tank three to seven coats of epoxy to be sure there would be no unsealed surface where water might penetrate.

We paid special attention to the tank end panels. They had five bolt holes, and alternating tanks had an O-ring groove for sealing off against the proceeding tank. Before assembling the tank, we cut the O-ring groove with a router. The groove was sized for a ¼” O-ring stock and cut oversize to allow for epoxy build-up to seal the exposed edge grain. The groove was cut at 9/32″ wide and ¼” deep; the epoxy build-up on the groove walls set up the proper compression for the O-ring seal. We made a scraper to help square the walls of the groove and control the depth after coating. The outer surfaces of the tank were sanded flat, this also helped set the depth of the O-ring groove and allowed the tanks to be bolted tightly together. The bolt holes were drilled oversized and given a generous coating of epoxy to seal exposed end grain. The holes were all located inside of the O-ring seal path to reduce the risk of leakage. 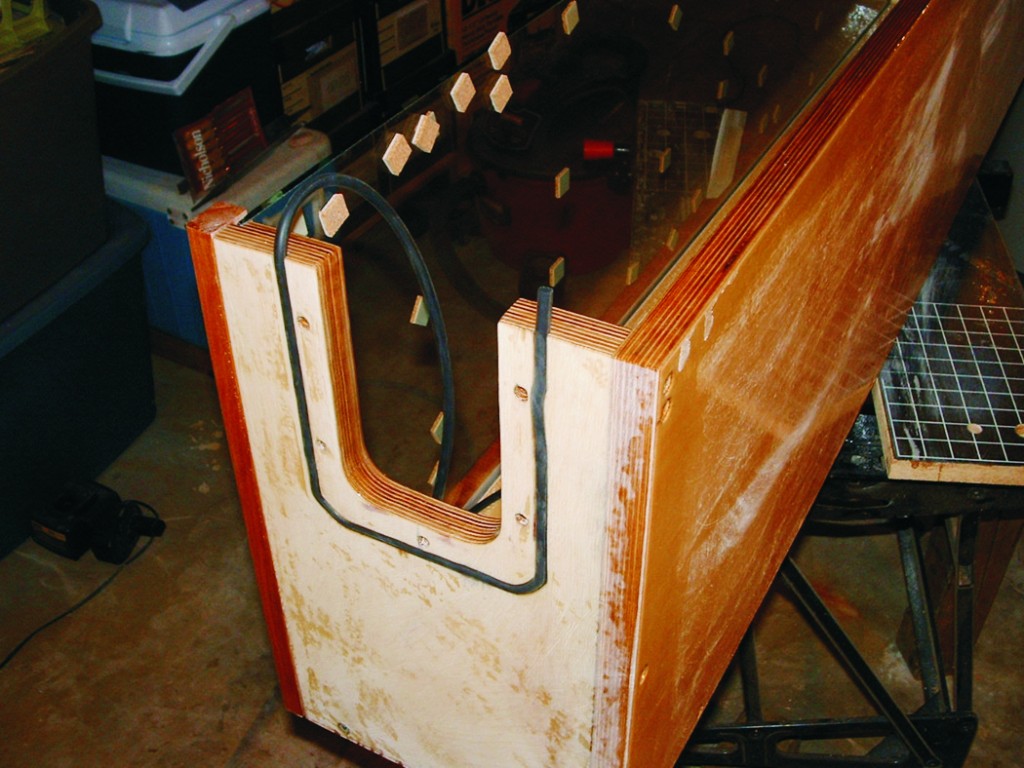 The bolt holes were all located inside of the O-ring seal path to reduce the risk of leakage. Holes were drilled oversized and given a generous coating of epoxy to seal exposed end grain.

Tempered glass was required for the front panels. The glass was sealed in place with aquarium silicone seated in a groove around the facing of the tank and held in with epoxy coated hardwood retainers. The retainers were sanded just below flush and coated separately. This allowed for servicing the glass and silicone seal. 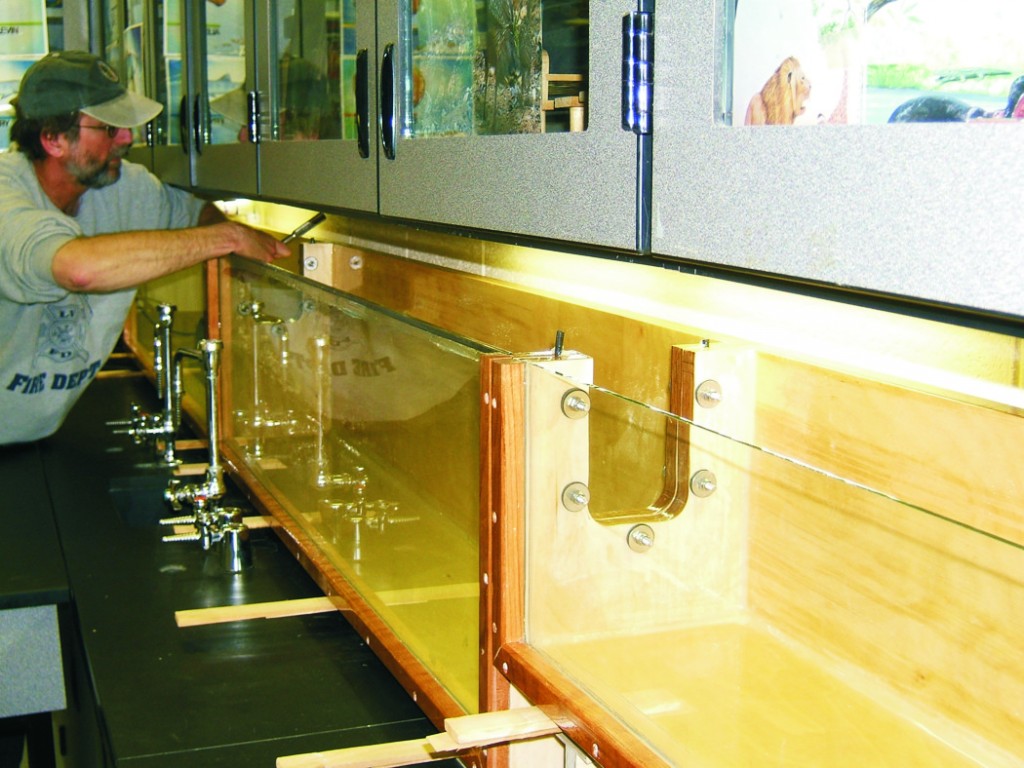 Filipiak assembling and leveling the finished tanks. The tempered glass face was sealed in place with aquarium silicone seated in a groove around the facing of the tank and held in with epoxy coated hardwood retainers. A

We asked a couple of the local businesses to help out with supplies and Glass Enterprise and Gentex Corporation stepped up. We appreciate their support to help make this project a success.

The tank has been in service since late February. The salmon were released the first week of June at a length to give them a good chance of making it to Lake Michigan from the local stream. We hope to see them back one day. 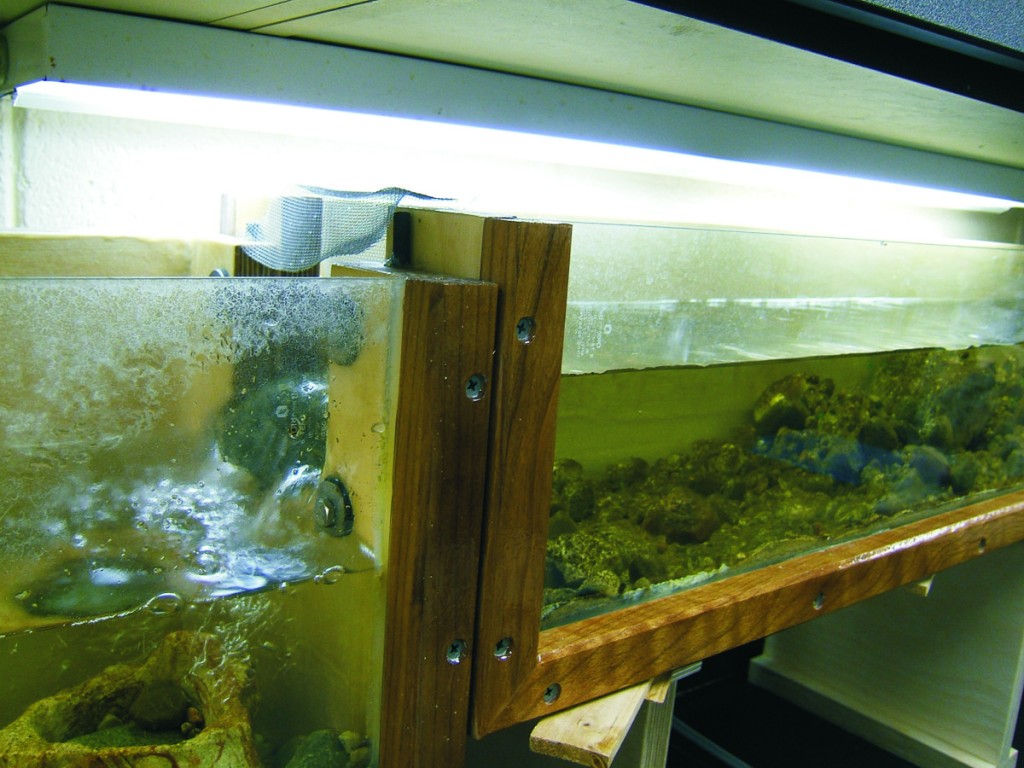 A pass-thru blocked by stones keeps the salmon from getting into the shallowest tank. 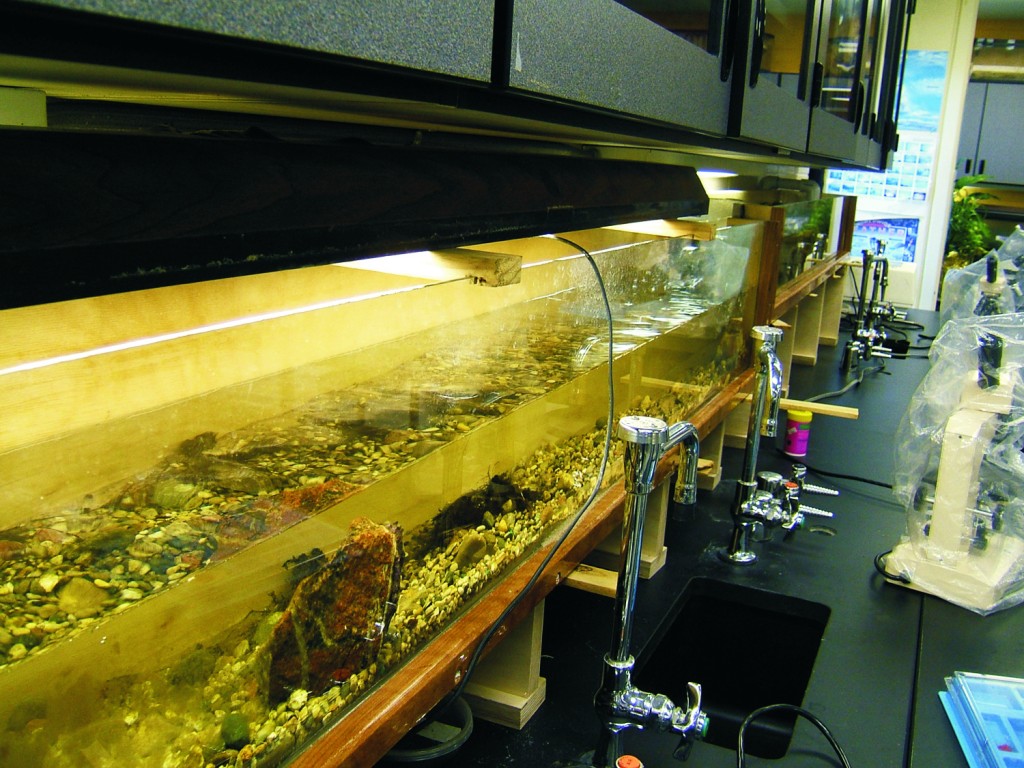 The finished assembled tank, an operating progressive ecosystem that flows from a brook to a stream to a pond.