The prep crew recently rescued and restored two Club 420 sailing dinghies using a combination of their own tenacity and West System® Epoxy. They achieved this through our youth sailing organization, More Kids On Sailboats (MKOS). At MKOS, we strive to let the kids lead, make mistakes, and learn how to do better the next time. The Club 420 project allowed them to do just that.

The Club 420 is a seaworthy and stable boat design that’s popular in youth sail training. It features a durable, reinforced hull, is simple to sail, and popular in North American youth sailing competitions. The “420” indicates the boat’s length in centimeters.

Prep Crew to the Rescue

Last September, we made a social media post requesting the donation of a Club 420 dinghy. This led to a road trip to Milwaukee Community Sailing Center (MCSC) to rescue two Club 420s whose next tack was towards the dumpster. We brought along three kids from the program’s prep crew. The mutual feeling of excitement for the boats’ future from our crew and MCSC was palpable. If boats have feelings, this pair of Club 420s were as excited for their next adventure as we were.

The MKOS prep crew dove in with power washers, scrub brushes, and knives. Yes, knives—to cut out the bird nests, hornet nests and mouse burrows. At this point in the process, the adults were not sure what was salvageable. But true to our mission, we let the kids lead the charge. They took indelible felt markers to the hull to identify weak spots, cosmetic flaws, fiberglass gouges and, of course, the opportunity to make their mark via autographs.

Bring on the Power Tools

Properly equipped with safety gear and instructions, the prep crew literally dug in, grinding out soft spots with angle grinders. They were initially worried about grinding too deep or too far or “cutting the boat in half.” In response, a mantra was quickly born, “There’s nothing that we can’t fix with West System.” With the fear of failure eliminated, the kids were able to confidently sand and grind beveled sections to prepare for fiberglass and epoxy repair. 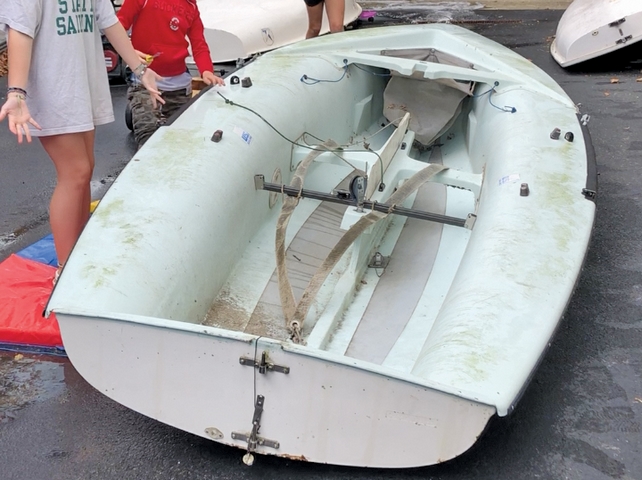 Club 420 after our delivery from Milwaukee.

Science on the Hard

We know sailing is filled with science and math on the water including wind angles, tactics, weather, hull design, and sail design. But the MKOS program prep crew experienced firsthand how science and math are intrinsic to boat restoration “on the hard.”

Luckily warm March sunshine brought temperatures above 50°F, allowing us to make repairs with epoxy. We added equal pump strokes of West System 105 Resin and 205 Fast Hardener, stirred it with our mixing sticks, then added 406 High-Density Filler. The crew measured fiberglass, cut it, and laid it down as described in “Repairing Gelcoat Stress Cracks” by Terry Monville in Epoxyworks 52. They smoothed the epoxy over the fiberglass with 808 Plastic Spreaders.

We were quick to answer our young prep crew’s many questions: Is it working (editors note: It should not!)? Why does it smell like that? And, Woah, should it be smoking? The shock and awe of liquid epoxy turning solid was magical. 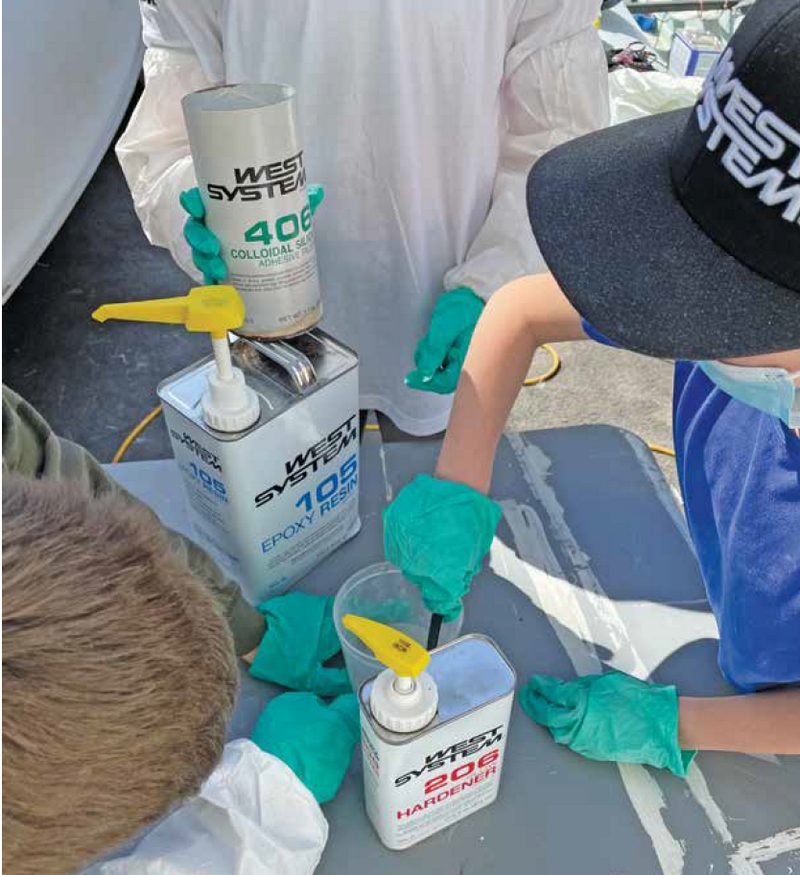 We plugged in the power tools again, making heavy use of disposable gloves and sleeves as we faired in our fiberglass and epoxy repairs. Sanding with 120-grit then switching to 220-grit was repeated often. Finally, we got the surface smooth enough to be fast on the water. The finishing touches included filling some tiny pits with West System 105/205 loaded into syringes. 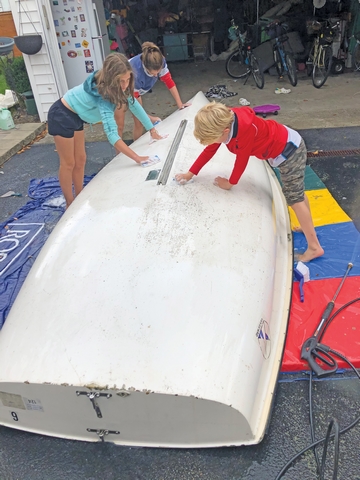 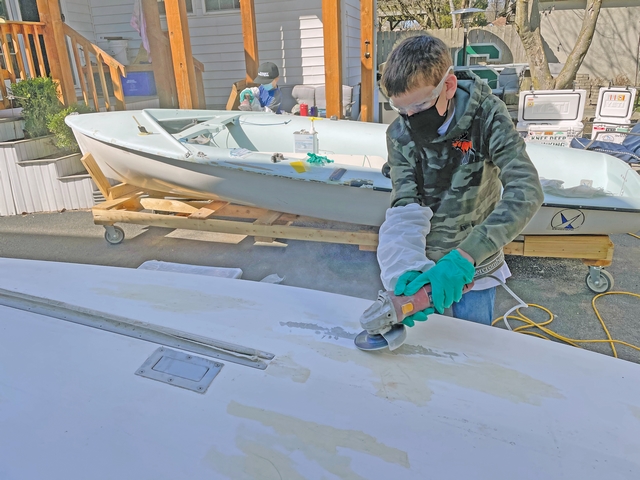 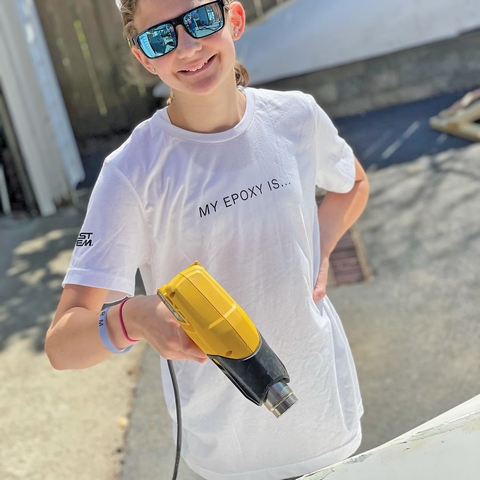 Reflections on the future of sailboat repairs. 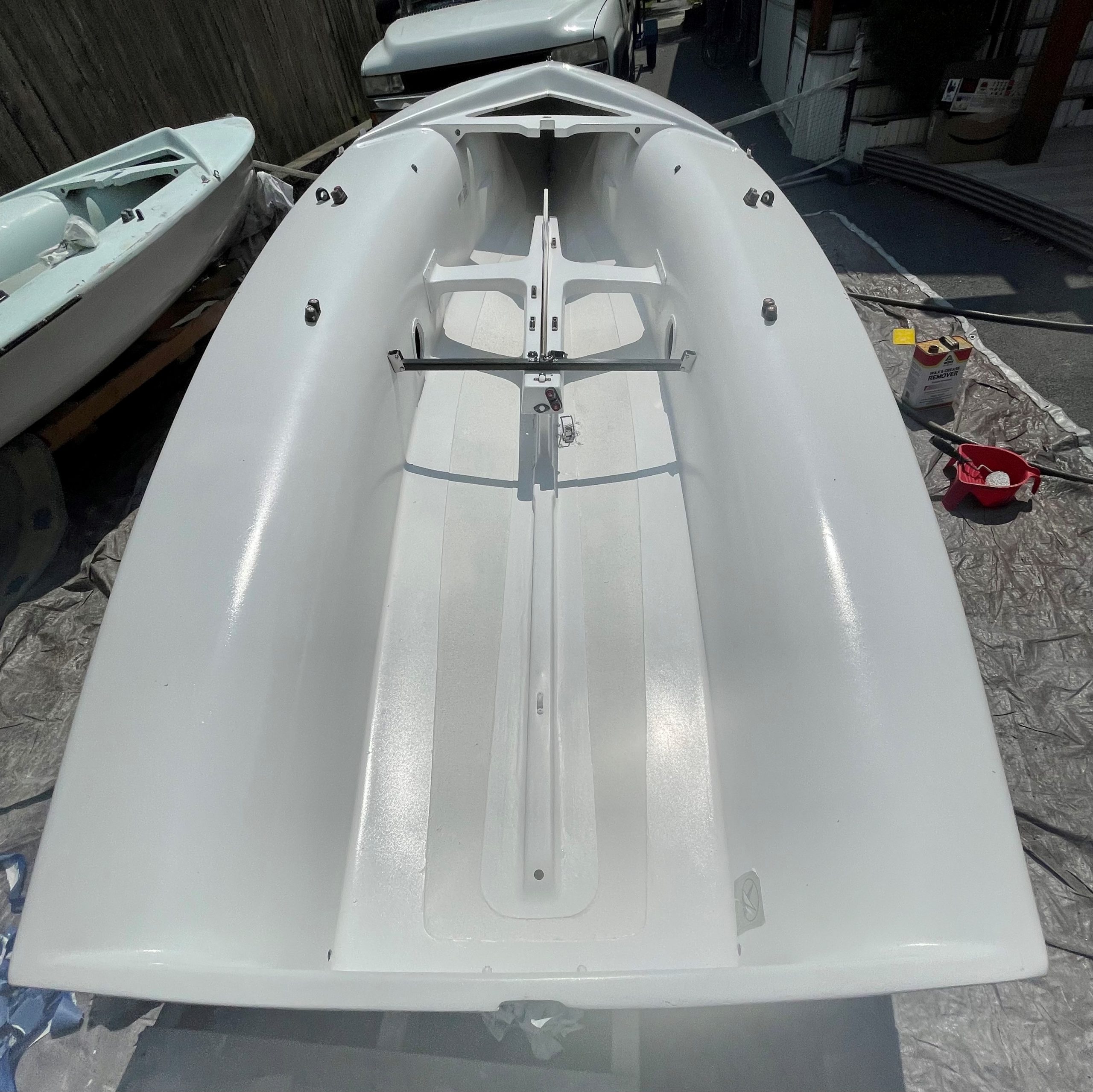 Club 420 Dinghies, ready for the Water

The final step was prepping the hulls with primer and painting with Interlux Brightside® polyurethane topside paint. We then flipped the boats over to finish the decks. The boats are now on the water and on the racecourse, filled with girls and boys moving to the next MKOS programs: Practice and Perform.

We believe that allowing kids to exercise critical thinking skills, make mistakes, and

solve problems will develop the grit and skills they need for success in life. More Kids

On Sailboats (MKOS) is a 501 (c)(3) dedicated to instilling these skills in today’s youth. These opportunities come both on and off the water through four core programs:

Use the hashtag #MoreKidsOnSailboats for your next sail.