Controlling exotherm (the heat released by the chemical reaction between resin and hardener that cures epoxy) is very important, especially when mixing larger batches of resin and hardener.  If not controlled, epoxy’s exothermic reaction can be dangerous.

The first step in controlling exotherm is understanding pot life—the amount of time that elapses before the epoxy hardens (cures) in the container. You need to estimate the amount of mixed epoxy you will use within a certain amount of time. Variables that affect the pot life calculation include temperature, volume, surface area, hardener speed, the insulating quality of the substrate the epoxy is exposed to, and any fillers added to the epoxy mixture.

Generally, for every 18°F increase in temperature, pot life is cut in half (see Hardener Selection Guide). This is useful for an approximation. However, the data we provide on pot life is based on 100 grams or four pump strokes each of resin and hardener using our 300 Mini Pumps. If you are using a larger amount of resin, or simply a different size cup, the length of pot life can vary. To increase the pot life of a cup of mixed epoxy, spread it over a larger surface area, work in a cooler environment, or mix multiple, smaller batches as you go.

The chemical reaction between resin and hardener as epoxy cures will generate heat. When this heat cannot escape, it builds up, causing the epoxy to cure faster because epoxy cures faster at higher temperatures. Curing faster because of the heat, the epoxy generates even more heat, even faster. This snowball effect is why a gallon of epoxy mixed all at once will turn solid in about 5 minutes. The resulting massive build-up of heat can cause the cured epoxy to crack because of the temperature differential between the top and bottom of the container.

This uncontrolled heat build-up is called uncontrolled exotherm. Epoxy heating out of control can foam, smoke, give off dangerous vapors and generate enough heat to melt its container or cause nearby items to catch fire. It’s crucial to understand epoxy’s exothermic curing reaction and follow the instructions in this article very closely if you are planning to fill a large area with a thick casting of epoxy. 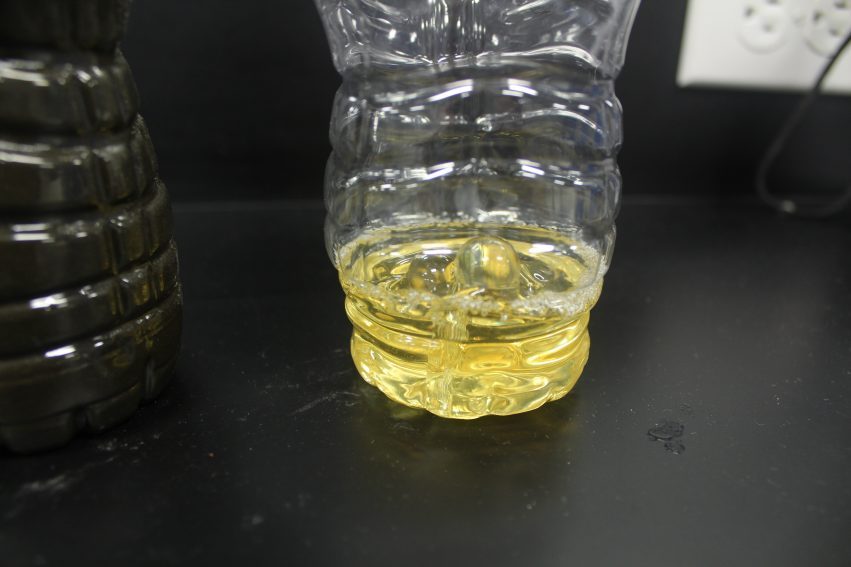 The mechanism that causes heat buildup when epoxy is contained in a thick mass is also why epoxy takes longer to cure when it is applied as a thin film. The film does not build heat, so the temperature through the thickness of the epoxy film is pretty close to the ambient temperature.

Occasionally customers are interested in filling a void by pouring a pouring large mass of epoxy all at once. This can be very dangerous because it will generate a lot of heat, and can lead to poor results because of the snowball effect mentioned earlier if you don’t control the exotherm. Some faster epoxy systems, blended in a mass large enough, can reach temperatures over 400°F: hot enough to melt or at least soften plastic. This level of heat could also damage whatever the epoxy is poured into. High temperature can also result in severe cracking throughout the thickness of cured epoxy; so much so that if the epoxy were not supported, it could fall away. Shrinkage can introduce significant stresses into the structure the epoxy is attached to. Customers casting large epoxy sections into boat bilges have reported hearing loud snapping or cracking sounds after the epoxy cured.

Pouring a large mass of epoxy is very difficult to do safely and effectively. Temperature, volume of epoxy, depth of the epoxy, and amount of heat sink in contact with the epoxy are all major variables in this application.

If you do want to pour or cast a large volume of epoxy, here are several proven methods for minimizing heat buildup which we’ve developed over the years.

Timing is important when doing multiple pours. Ideally, you want to wait for mild exotherm to peak and begin falling before mixing a new batch and pouring. Waiting too long could cause an insufficient bond between the two pours. Not waiting long enough can cause too much heat to build and cracks to propagate.

Slower cure allows a deeper pour before too much heat buildup occurs. For this reason, we recommend using our slowest systems when casting larger amounts of epoxy: 105 Resin with 209 Extra Slow Hardener, or G/flex.

Cooler shop temperatures and cooling the epoxy itself will both work to your advantage in slowing cure and controlling exotherm. A deeper pour can be accomplished with less heat buildup by starting with cooled epoxy and a cool substrate until the epoxy initially cures to a soft solid. Then you could expose it to room temp or higher to complete the cure.

A heat sink is an object that can absorb a lot of heat. If you are applying the epoxy into or over a heavy metal object, it will absorb much more heat than a lower-density object.

High-density fillers can also act as a heat sink, reducing exotherm by absorbing more heat than a low-density filler, and taking up more volume. This leaves less room for mixed resin and hardener, reducing the resulting heat reaction and controlling exotherm.

If the wrong epoxy/filler combination is used for a certain cure temperature, the epoxy may generate enough heat to smolder and burn. Adding more low-density filler will certainly reduce the amount of epoxy in a given volume, but the filler will act as an insulator instead of a heat sink. This effect is shown in the testing that we did. 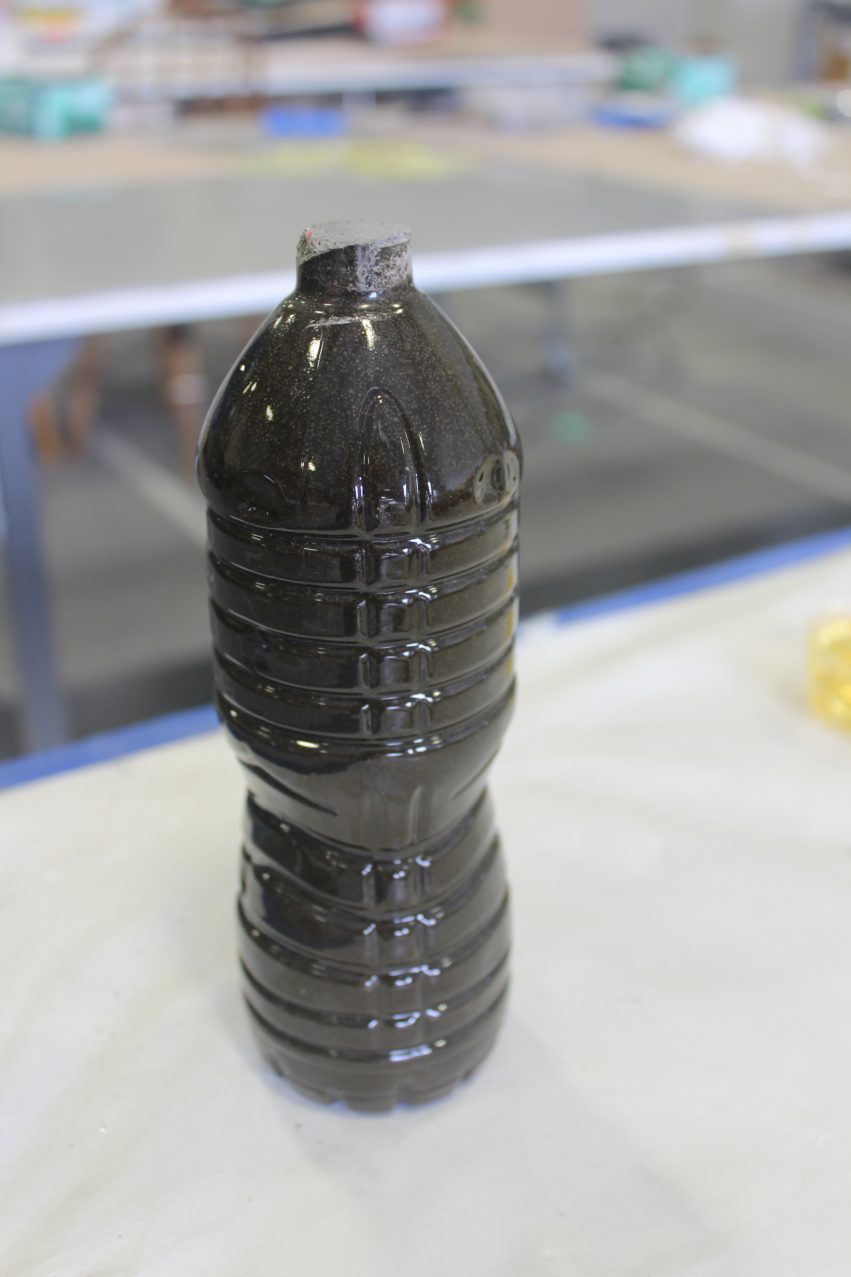 105/206/Quikcrete in 18 oz. bottle (completely filled) reached 150 F (700 grams Quikcrete–250 grams mixed epoxy) without any deformation or cracking. In this case, the Quikcrete acted as a heat sink, keeping the epoxy’s exothermic reaction under control. 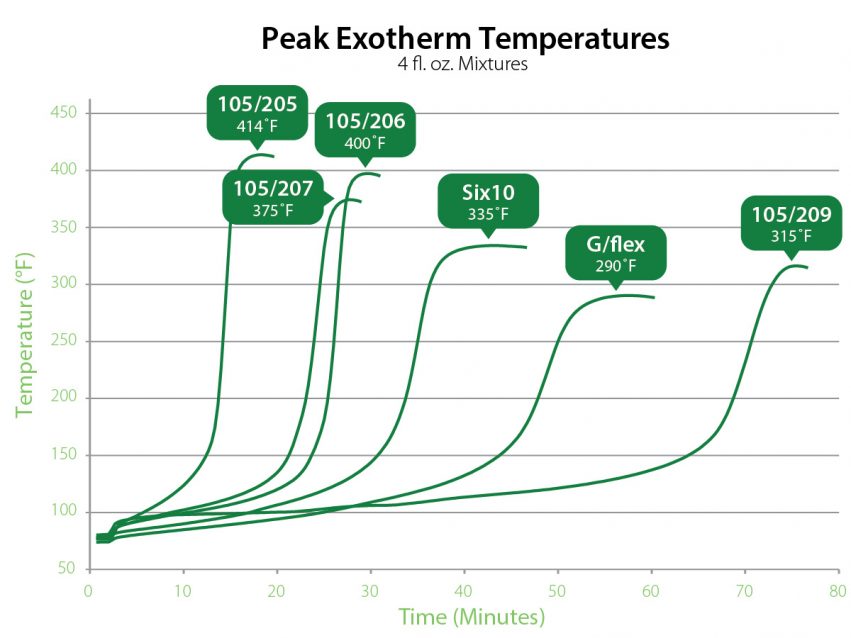 Graph 1 shows the temperature of about 4 fluid ounces (4 pump strokes with 300 Mini Pumps) of epoxy over time. The epoxy is contained in a small cup with a plastic top covering so little heat can escape. As is typical, the slower epoxy systems release less heat and take longer to reach that temperature. Keep in mind that the epoxy is not necessarily fully cured when the line ends. Sure, this is nearly the highest temperature the curing epoxy will reach, and it has started to cool, but as the next graph demonstrates, it may not be hot enough to fully cure the epoxy that quickly. 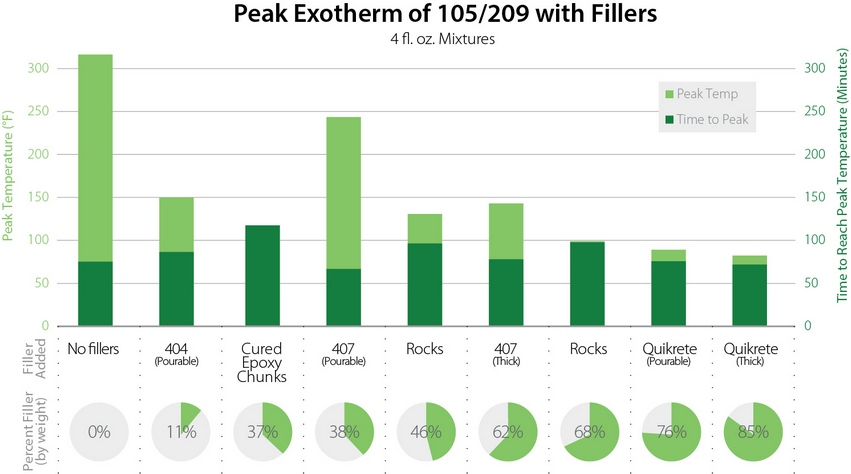 Graph 2 shows how different additives will affect the peak temperature and the time it takes to get to the peak temperature. For this test, we used the 105 Resin/209 Extra Slow Hardener because it is more readily available at retail stores in larger quantities than G/flex. The various fillers produce an effect similar to what is in the graph when used with G/flex, the lowest exotherming product from WEST SYSTEM.