D-ring pads are often attached to flexible surfaces with urethane adhesives to gain load-carrying capacity where there otherwise wouldn’t be any. They are used on waterproof fabric cargo bags, heavy tarpaulins, and inflatable boats. They are also sometimes used on the decks of canoes and kayaks to hold cargo in place on long trips. D-rings are not typically used on polyethylene canoes and kayaks because the urethane glues are not recommended for use on HDPE (high-density polyethylene) plastic. We experimented with gluing D-ring pads with G/flex 655 Thickened Epoxy Adhesive to HDPE plastic with that end-use in mind. 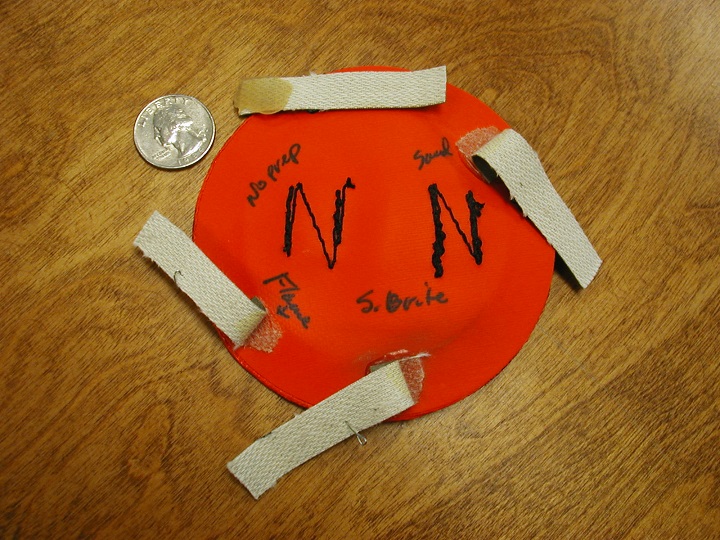 Phase I, gluing upholstery fabric to the D-Ring Pad to test G/flex adhesion.

The first part of our test was to determine if G/flex would stick to the flexible D-ring pad. D-ring pads are made of a variety of tough fabrics covered with rubber-like membranes or coverings. In our tests, we glued to three different coverings, Hypalon™*, PVC and urethane. With each, we tested surfaces sanded with 120-grit, roughed up with an abrasive pad, flame treated with a propane torch and one section that was left as a control with no prep. We glued the unfilled cotton side of a strip of vinyl-faced upholstery fabric to the surfaces and allowed the G/flex to cure before pulling up on the vinyl fabric tabs (Figure 1). If the glue stayed attached to the D-ring pad when the cotton/vinyl tab was pulled away, we considered the adhesion adequate. From this part of the test we learned that abrading by sanding or by rubbing surfaces with a Scotch-brite™ pad worked on each of the three pads tested. G/flex always stuck to the abraded pads, so we recommended abrading with either sandpaper or an abrasive pad.

We prepared ½” thick HDPE plastic for gluing the D-ring pads by cleaning them with a solvent, wiping them with paper towels, and then flame treating with a propane torch using the technique described on page 17. We chose the thick HDPE so we could clamp the specimens into the test device. We glued the pads in place with G/flex 655, the thickened version, so the glue would bridge gaps and stay put during the cure. After allowing the epoxy to cure for a couple of days, we placed the HDPE/D-ring mock-ups in one of our test devices and applied load to the D-ring at 90 degrees to the glued surface until something broke. The photos describe the failure mode. In each case, the failure occurred in either the strap that ran through the D-ring or in the flexible fabric pad that the G/flex was adhered to (Figures 2 and 3). In other words, G/flex adhered to both the flame-treated plastic and the flexible pads until the pad or the D-ring strap failed. 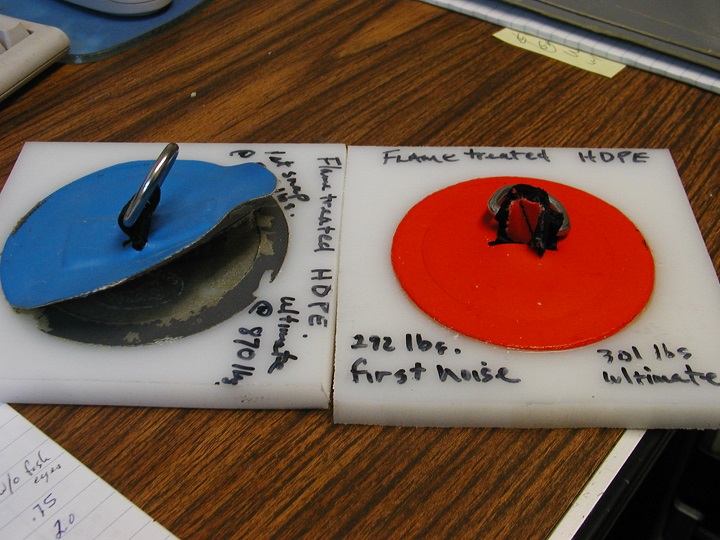 Results of Phase II tests. Failures occurred in the D-Ring strap or in the pad itself.

If you decide to use G/flex 655 to glue D-ring pads on your boat, be sure to test adhesion to the flexible membrane that typically covers the support pads. Try sanding or abrading the surface because it worked across the board on each of the three types we tested. If you test adhesion to your D-ring pads and come to the same conclusions we have, you will feel comfortable installing D-rings pads to your HDPE canoe or kayak using G/flex Epoxy. ?Our tests were done with D-ring pads from NRS (www.nrsweb.com), a well-known outdoors sporting goods company. 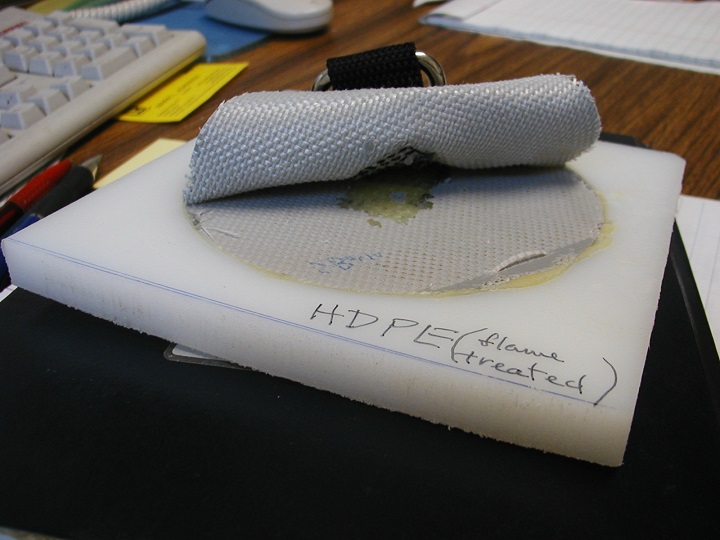 Another example of a D-ring pad failure in Phase II testing.

Our tests were done with D-ring pads from NRS, a well-known sporting goods company.

*Hypalon is a trademark for chlorosulfonated polyethylene (CSPE), a synthetic rubber.