Editors note: Our head chemist Tim Atkinson penned this piece on some of the history of Gougeon Brothers, Inc. on the occasion of our 25th anniversary, back in 1994.

In 1969, Meade Gougeon and his younger brother Jan founded Gougeon Brothers’ Boatworks to build iceboats. These lightweight, sail-powered vessels were built of wood laminated with epoxy. By 1973, the company was the largest builder of iceboats in the country. The company rapidly expanded its business into other boat building efforts.
Using epoxy to build the iceboats was a natural choice since they had been using epoxy as an adhesive on many boat projects for the previous 10 years. Meade and Jan were first introduced to epoxy resins in 1958, by Vic Carpenter of Superior Sailboats in Montrose, Michigan. Vic was one of the earliest users of epoxy resins as a structural adhesive for wooden boats. He learned about epoxy resins from a pattern maker. At that time, epoxy had just made an entrance into the pattern-making industry, where it was used to bond patterns together. Frequently, boat builders who wanted to experiment with epoxy resins would go to a pattern shop and decant a bucket of resin and a bucket of hardener and take it back to their shop. The Gougeons were quite intrigued with the possibilities of epoxy resins for boat building.

In 1960, while stationed with a large corporation in Kansas City, Meade built two boats using an epoxy as the adhesive. After being transferred to Erie, Pennsylvania, in the early 1960’s, Meade and Jan built their first trimarans using epoxy from a nearby chemical company. Up to this time they had mixed results with the different epoxies they had used. However, they were very impressed that epoxy could bond to many different kinds of wood, metal, and fiber reinforcement, and that it appeared to be very moisture resistant as well. The commercially available epoxies of that time had many advantages over the other adhesive options, such as resorcinol and WELDWOOD™ (a urea formaldehyde powder which was dissolved in water before use), but they still had some limitations.

After returning to their hometown of Bay City, Michigan in the later 1960s, Jan and Meade established their new business on the former site of the Ben Huskins Boatworks on the Saginaw River. With the help of friends who worked at Dow Chemical, they formulated their own epoxy system which was ideally suited for their application. Modifying the epoxy system so it was suitable as a coating was a major break-through. It had long been known that the epoxy resins had very good moisture resistance but they were so difficult to apply that they weren’t used as a moisture barrier coating. With the new formulation, the epoxy could easily be applied as a moisture barrier over wood or fiberglass surfaces.

Many people who saw the iceboats were interested in using Gougeon Brothers’ resin system for their own projects. By 1971, Gougeon Brothers was selling WEST SYSTEM® Epoxy to other builders and to customers who wanted to use the epoxy for building and repairing their own boats. Brother Joel Gougeon joined the company in 1971 and was very involved with developing the epoxy business during his years with the company. In 1975, the original iceboat business was sold to Joe Norton of Norton Boatworks in Green Lake, Wisconsin, so that the company could concentrate on the epoxy business and building larger custom boats. Today, our epoxy systems are sold across the United States and in a dozen foreign countries.

Much of the early success of WEST SYSTEM epoxy was due to its compatibility with wood. The epoxy was used for construction of new craft and repair of old. By the early 1970s, mass-produced fiberglass boats had essentially replaced the traditionally built wooden boat. But with the aging of the fiberglass fleet came the need for a dependable repair resin. Epoxy resins became a popular choice because of their superior moisture resistance and their ability to bond to a wide variety of substrates. However, because of the nostalgic value and beauty of wooden boats, the wooden boat market did not completely disappear.
The construction technique based on laminating wood veneers together with epoxy, which the Gougeon Brothers developed for building the iceboats, was also used to build a few high profile racing sailboats. The first complete boat built incorporating WEST SYSTEM epoxy and composite construction techniques was Adagio. This 35-foot trimaran was designed and built by the Gougeons and launched in 1970. Another notable boat built in this manner was the Holland-designed Golden Dazy, which won the Canada’s Cup Regatta in 1975. The success of these wood/epoxy composite boats led to a “mini-revolution” amongst builders and designers. They realized that they could build stiffer and stronger hulls with wood and epoxy than they could with fiberglass, and do so without increasing the weight. Many custom builders continue to choose wood and epoxy as their construction materials today.

Other important boats built by Gougeon Brothers include Accolade, a Bruce Kirby-designed 30′ half-ton monohull in 1974; Hotflash, a Gary Mull-designed 32′ half-ton monohull in 1976; Phil Weld’s Rogue Wave, a Dick Newick-designed 60′ Trimaran, in 1977; and Slingshot, a Georg Thomas-designed 60-foot proa in 1978. Slingshot recorded the second fastest time at the World Speed Trials in 1979. Gougeon Brothers developed a production version of the Olympic Class Tornado catamaran, which they built in 1975 and 1976. A Gougeon-built Tornado was sailed to win a Silver Medal in the 1976 Olympics. Patient Lady, a C-Class catamaran built by Gougeon Brothers, won the 1977 Little America’s Cup. Adrenalin, a Formula 40 Trimaran, was built for Bill Piper of Ossineke, Michigan in 1987. This boat amazed the sailboat racing world by taking an extremely close second place during her first regatta in the Formula 40 Grand Prix circuit in Brest, France, in April of 1988. But later Adrenalin was legislated out of contention when the Formula 40 class rules were changed.

The manufacturing experience and research and development associated with the use of wood/epoxy composites in the construction of wind-turbine blades has also largely influenced our company. In 1979, the Gougeons’ reputation for excellence and innovation in wood/epoxy composite construction captured the attention of NASA researchers who contacted the company to build experimental wind turbine blades for use on wind energy machines. The success of the wood/epoxy blades led to multi-million dollar contracts with General Electric, Westinghouse, and Bendix. 4,300 blades, from 10 to 70 feet long, were produced between 1979 and 1993. The wind turbine business allowed the company to fund a extensive research program, the results of which have been instrumental in developing extremely light weight structures, both on and off the water. Data collected was also used to improve the performance of WEST SYSTEM Epoxy and to test new construction methods.

In 1990, Gougeon Brothers built the prototype for the Gougeon 32 catamaran, Wildcard. The G-32 was markedly different than previous Gougeon-built boats because it used foam-cored composite construction and the new Gougeon Laminating Epoxy and only minimal amounts of wood. As far as we know, it was the first female-molded production boat built with epoxy. Wildcard enjoyed a very successful racing career and, to date, fourteen G-32’s have been built.

Today, we still sell primarily into the marine market, but our epoxy formulations find their way into a wide variety of other applications. This diverse customer base requires a large customer service effort. Our technical staff fields more than 10,000 technical questions annually. Gougeon Brothers has always worked closely with its customers and has built its business as an epoxy formulator based on interactive customer service, extensive research and development, and manufacturing experience. Gougeon Brothers strives to support its customers by sharing its knowledge and experience through books, instructional manuals and other publications, videos, seminars and workshops.

Gougeon Brothers, Inc. has always been a privately-held company but in 1983, set the ground work to become an employee-owned company. In effect, any Gougeon employee you speak with is a part-owner of the company and has a vested interest in keeping you as a satisfied customer.

In 1992, Gougeon Brothers developed a mission statement affirming our purpose. That is to provide safe, high-quality, cost-effective products and comprehensive technical information supported by continual research and development. 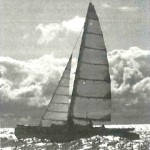 The 35′ Adagio, built in 1970, was the first boat using epoxy composite construction throughout. She is still in excellent shape in 2015. 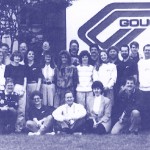 The staff of Gougeon Brothers in 1994. 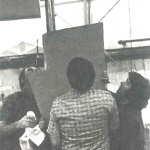 Meade, Joel & Jan installing the rudder on HOT FLASH in1974.