TRADER is an Alan Andrews designed 70′ IMS racer/cruiser, built by AKE Ltd. On July 7, 1992, my wife Deb and I traveled to Tallinn, Estonia. We were there to help begin the lamination of TRADER the first boat built with Gougeon Laminating Epoxy [the precursor to PRO-SET Epoxy -ed] in the former Soviet Union.  In October 1990, East and West Germany were reunited. In 1991 the Soviet Union was dissolved. In July 1992, Gougeon Brothers traveled to the Eastern Block. Yep, history in the making.

Tonu Urbanik is building TRADER for Fred Detwiler of Detroit, Mich. Detwiler is an entrepreneur with several businesses in Estonia and Russia. While there on business, he met Urbanik, who was in charge of building the America’s Cup boat, RED STAR. Unfortunately, this boat couldn’t compete in the America’s Cup because the Soviet government was dismantled before the boat was completed. Urbanik formed his own boat building company, AKE, once the government no longer owned all of the industry in Estonia. 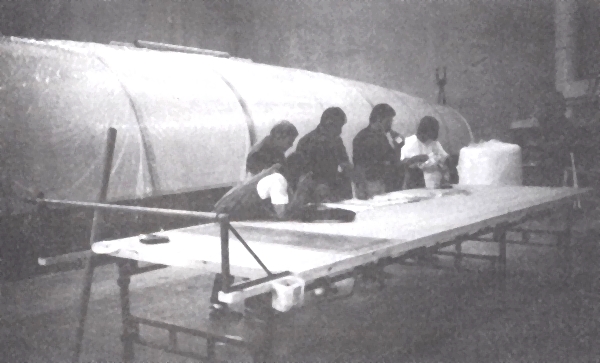 The project management team discussing the hull laminate schedule in front of the mold for TRADER.

AKE is building the boat on a male mold. The glass is wet out with an impregnator, placed on the mold, and then vacuum bagged. The construction materials are Hexcel SA060 unidirectional S glass for inner and outer skins, with Knytex SDB120 and Knytex DB170 for local reinforcement. It has Klegecell 1.5″ R100 and R130 PVC foam core in hull and deck, with Baltek CK57 Balsa in areas of the deck where hardware will be located. Our Gougeon Laminating Epoxy was the resin and hardener combination for hull and deck lay up, and WEST SYSTEM 105 Resin and 206 Hardener is used for bonding internal stiffening structures and furniture.

The boat was scheduled for completion at the end of January 1993. Once the boat was finished, Detwiler would have it loaded on the deck of a freighter and shipped to Ft. Lauderdale, Fla. He planned to sail the boat in early March of 1993.

Many of the supplies and equipment we take for granted in the States are not available in Estonia. The craftsmen have to be very creative, fabricating the tools and equipment they need themselves. We needed hose barbs to join the vacuum hose with a solid tube but could not find any locally. I drew a sketch of a hose barb, and an hour later, Boris had made about 25 of them out of solid aluminum bar stock on the lathe in the shop next door.

WEST SYSTEM products are distributed throughout most of Europe by Wessex Resins & Adhesives under license from Gougeon Brothers, Inc. These products were not yet available in the Eastern Block countries [They’re available there now—Ed.]. To make it possible to build Trader, the materials had to be purchased in the United States and shipped to Tallin. Oddly, ice boaters in the Eastern Block have been using WEST SYSTEM epoxy for years. I wondered, where did they get it? Finland perhaps.

Tallinn is a very old city on the Baltic Sea. The old part of the city is between 800 and 1000 years old, and is surrounded by a wall about 40′ high and 25′ thick. There are about 25 guard towers built into the wall around the city. All of the government buildings are in the center of the city, and all of the streets leading to this central area can be closed off as well. The buildings in Tallin showed the work of craftsmen of earlier centuries. Most of these buildings have tile roofs, brick and stucco walls, and are in remarkably good repair. The wood and stonework are very ornate. Adorning all of the prominent buildings were wrought-iron weather vanes, depicting various scenes. The one on the town hall looked like it was made of lace, truly an intricate piece of workmanship.

Tallinn is one of the largest commercial seaports on the Baltic Sea, with a constant stream of freighters and cruise ships going in and out. The area is dotted with islands and bays, much like the North Channel of Lake Huron. The shoreline has beautiful white sand beaches, with thick forest behind. I think the area has a great deal of potential for tourism. Peter the Great thought so too, and had a summer home there in the early 1700s.

We found the people of Estonia intriguing. When we arrived at the airport, the thing that struck me most was the lack of noise. There were about 250 people waiting in the airport, making no noise at all. It was kind of eerie. In normal conversation, the local people spoke quietly, at times you could barely hear them. They seemed a little timid to me. 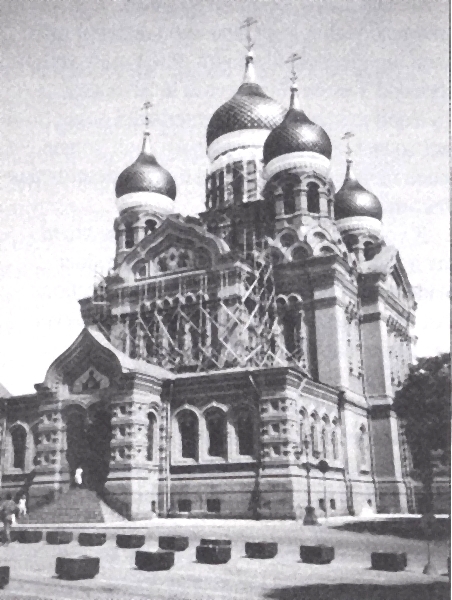 The Tallinn Cathedral, built for Peter the Great in the 1700s, in the same town where TRADER would be built.

Everywhere we went, American music was playing. We could be in a quaint little courtyard restaurant, yet have to listen to disco or early 80’s pop music playing really loud. I always wondered where disco went to die, and now I know. Amazingly, none of the local people could understand the words, but they seemed to love the music.

Visiting Estonia made me realize that the people there are much the same as you or me. Being brought up during the Cold War years may have encouraged us to ignore the similarities between us. Debbie met a couple of Estonian women who spoke English, and they took her on guided tours of the city. She stood in line with them to buy bread and cheese at a local market and shopped at the street vendors’ stalls. Debbie really enjoyed spending time with these women while I worked. 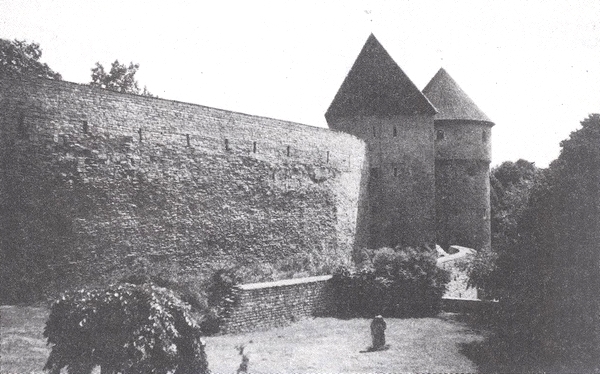 Two of the 25 towers built into the 800-year-old wall surrounding the old city of Tallinn, Estonia.

I hope that someday we will get the chance to return and visit the friends we made while we were there, but the experience has made us appreciate what we have here in the United States. I missed our home and yard, and the room we have to roam. We both missed the conveniences of everyday life here. Most of all though, I missed our family. It is good to be home.