If you look closely at some of the photos in the Bufflehead article, you will notice small pad eyes in strategic locations inside and outside of Hugh Horton’s Bufflehead. Hugh makes these lightweight carbon or Twaron™ reinforced nylon line pad eyes for his sailing canoes.

He glues them onto the decks or inside his sailing canoes—wherever they’re needed to hold supplies in place or hold flotation inside the hull. The pad eyes are easy to make and are amazingly strong. 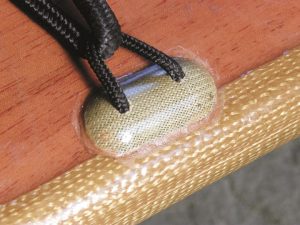 Close up of a soft pad eye mounted to the deck of a Bufflehead. The pad eyes Hugh Horton used on the Bufflehead deck were made wtih Twaron™ an aramid fiber. The soft pad eyes are strong yet not as likely as rigid pad eyes to catch a knuckle or a knee cap.

Hugh starts with simple cup-shaped molds about 3/16″ deep by 1& 1/4″ wide by 2″ long. (He employs several molds to make the process more efficient.) In the version shown in the photos, he applies one layer of 5.8 oz carbon fiber fabric, wet out with 105 Epoxy Resin®/207 Special Clear Hardener™ into the molds and allows them to cure.

Next, Hugh releases the molded carbon fiber cups and drills two 1/8″ diameter holes about an inch apart, centered and parallel to the 2″ length. He cuts 3& 1/2″ lengths of 1/8″ nylon line and applies a couple wraps of narrow electricians tape about 1/2″ in from each end. He feeds the lines through the drilled holes from the molded side of the cup until the tape touches the cup. He then frays the line ends in preparation for gluing. This results in something similar in appearance to a couple of cotton balls.

After wetting out the frayed nylon fibers with 105/205, he glues the line ends and fills the cups with the same epoxy thickened with 403 Microfibers. Before cure, he places them onto heavy, clear plastic film. While applying the glue, he tries to keep the frayed ends splayed out uniformly in all directions. When the cups have cured, Hugh removes them from the plastic and sands the bottom in preparation for gluing them onto his boats.

He recently experimented with making the pad eyes using our pre-thickened specialty epoxies: Six10® Thickened Epoxy Adhesive and G/flex® 655 Adhesive. The results have been excellent.

When we heard of Hugh’s experiments, we offered to test the holding power of the soft pad eyes using an extraction device that incorporates a digital load cell. 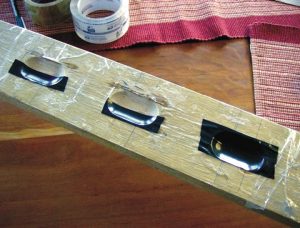 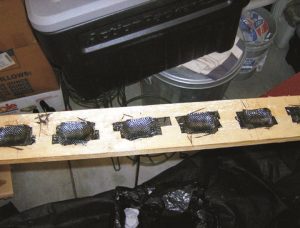 The mold with wet-out carbon fiber. When cured the cups are removed from the mold and trimmed to shape. 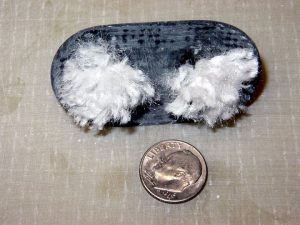 1/8″ nylon line is passed through holes drilled int he cup and the ends are frayed and wet out.

For comparison purposes we tested some injection-molded plastic pad eyes that were glued down with G/flex 655 Adhesive and Six10 Adhesive. We even glued some of the soft pad eyes down with our G/5® Five-Minute Adhesive.

In the end, all the pull-off strengths fell between an impressive 526 pounds and 724 pounds. The soft pad eyes Hugh makes weigh 5.3 grams each while the molded plastic pad eyes, purchased through a marine supply catalog, weighed 21.25 grams each. 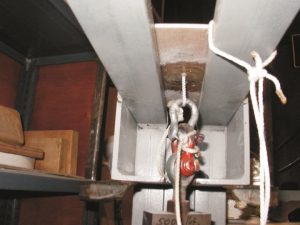 The extraction device with a digital load cell (top) that recorded the pull off strength of soft pad eyes glued to a fiberglass laminate (bottom). 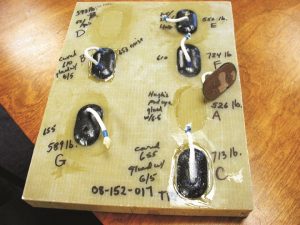