“The wind is coming up. Tell the boys they can commence with the race.”

Fittingly, these would be the last words of Meade A. Gougeon as he watched a fleet of sailboats, including his trimaran Adagio, assembling for the Great Lakes Multihull Regatta in front of his home on the Saginaw Bay.

Meade, along with his brothers Jan and Joel, founded Gougeon Brothers, Inc. in 1969. The brothers pioneered the use of epoxy in boat construction and repair. They got their start building DN class iceboats with wood and epoxy.

By 1973, the brothers’ small boat shop in Bay City, Michigan was the largest builder of iceboats in the United States. Even so, in 1974 they sold the DN portion of their business to focus on soft water boats and WEST SYSTEM®.

In 1971, Meade launched Adagio—the first large, all epoxy bonded and sealed wooden boat built without the use of fasteners. He’d built her with his brother Jan in just six months. She’s been sailing on the Great Lakes ever since, winning the Bayview Mackinac Race in 2000, 2002, 2006, 2016 and 2017. Adagio is proof that fully bonded monocoque structures can be built not just to last, but to be serious competitors for generations.

In 1979, Meade wrote The Gougeon Brothers on Boat Construction. This boatbuilding guide details composite construction techniques using wood and epoxy. It remains a favorite resource for professionals and first-time boat builders, and is often used as a textbook in boat building programs.

A few of the notable wood-epoxy boats built by GBI include the Ron Holland-designed two-ton monohull Golden Dazy which won the 1975 Canada’s Cup; the 60′ Dick Newick designed trimaran Rogue Wave; the Georg Thomas-designed proa Slingshot which was clocked at speeds of over 40 MPH; Adrenalin, a Formula 40 trimaran of wood, epoxy, and carbon fiber; the Gougeon 32 production catamarans including Incognito, which, skippered by Russell Brown, finished first in the solo class in this year’s Race to Alaska. 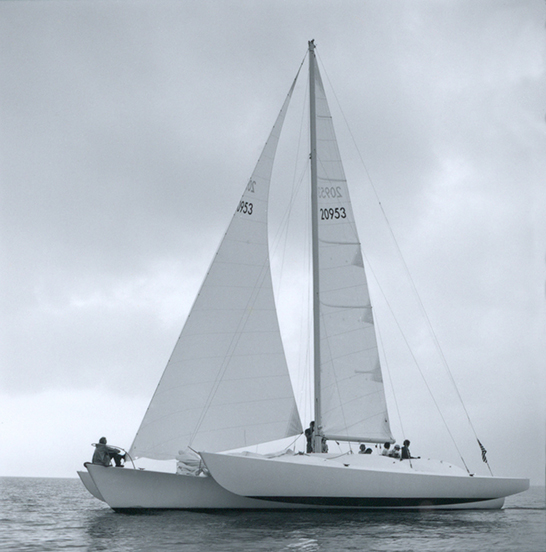 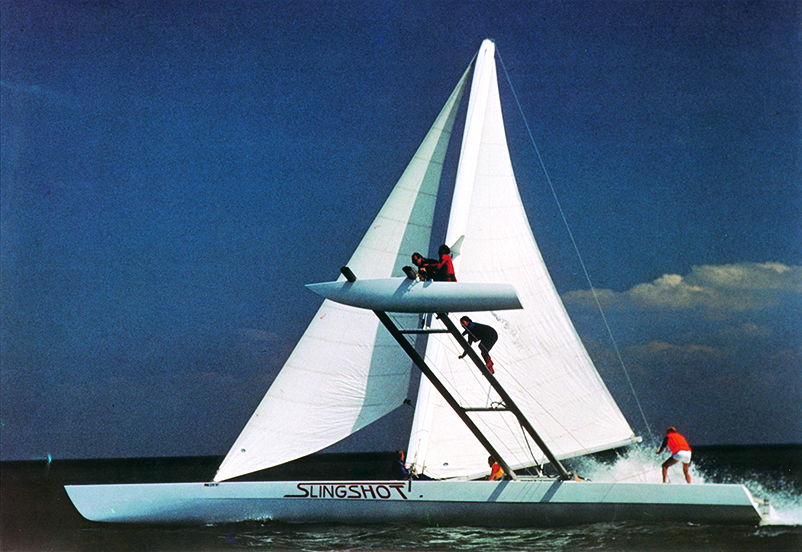 Slingshot, a Georg Thomas designed proa that clocked at speeds of over 40 mph. 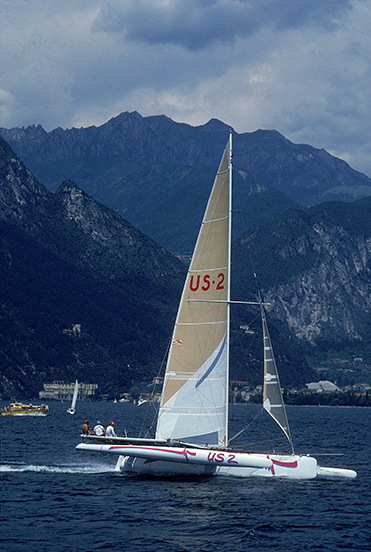 Aboard the outrigger canoes Voyager and Elderly Care respectively, he placed first in his class in the grueling, 300-mile Everglades Challenge in 2014 and 2017. He raced iceboats with the International DN Ice Yacht Racing Association for several decades, winning the US Championship in 1981 and 1997. He was inducted, along with his brother Jan, into the National Sailing Hall of Fame in 2015.

Always a positive force in his community, Meade served on many local non-profit boards and was a local philanthropist.

Adamant that GBI should remain a robust company in his absence, Meade went to great lengths to assure that the next generation of management and employees were prepared to succeed him and his peers. Because he laid the groundwork for his succession, the company remains focused on servicing our customers, community and industry.

It was Meade who came up with the idea for The Boatbuilder–the predecessor of Epoxyworks–in 1977. Meade believed in sharing everything we learned along the way about epoxy, chemistry, materials testing, best practices in the shop, design, construction, and repair techniques and approaches.

We thought it would be appropriate, and really cool, to republish The Boatbuilder 1 July/August 1977. One of Meade’s proudest achievements is this publication and he marveled at how Epoxyworks evolved over its 41 years in continuous print.

If Meade could say it himself he would thank all of you, our Epoxyworks readers, from the bottom of his heart. In his absence, we, the Employee Owners of Gougeon Brothers, Inc., offer you our sincerest thanks.