My wife’s 2000 Audi TT has a very sleek shape, and these smooth lines are carried under the hood with molded plastic engine covers that provide a very clean-looking engine. Unfortunately, when I was servicing a burned-out bulb, I attempted to remove the engine covers in the wrong sequence which caused a tab to snap off.

I couldn’t justify going to a dealer to buy a new one, and I didn’t want to spend time searching the salvage yards, but I needed to either repair it or try to convince my wife this part of her car is unimportant. After looking at the part, I decided it could be glued back together with G/flex® or possibly G/5®. Since I didn’t know what type of plastic the engine cover is made from, I needed to determine what adhesive and surface prep would yield the best results.

Each of our technical advisors gets phone calls from customers with the same question I had, “I have a part made out of an unknown plastic, what do I do?” My advice is to perform a very simple test to decide on how to prep the surface and what product to use.

I was fortunate in that I could perform a test on the backside since that area isn’t visible when it’s assembled on the engine. I decided to test six combinations of adhesive and surface preparation.

I first prepared all six areas and then glued simple ¾” × ¾” blocks of ¾” plywood to the surface with the plywood veneers parallel to the surface (image 1, top).

After a 24-hour cure, I used a set of large pliers to twist the blocks off (image 2, below). 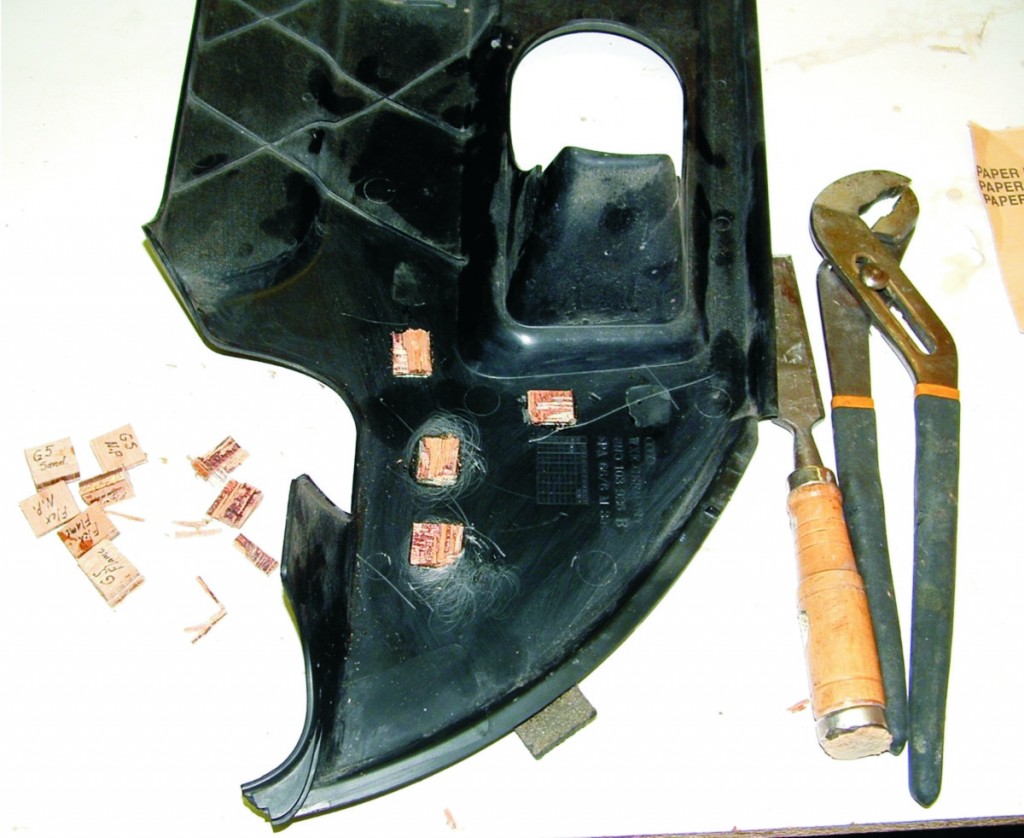 2—The test showed which combinations of glue and prep worked best. 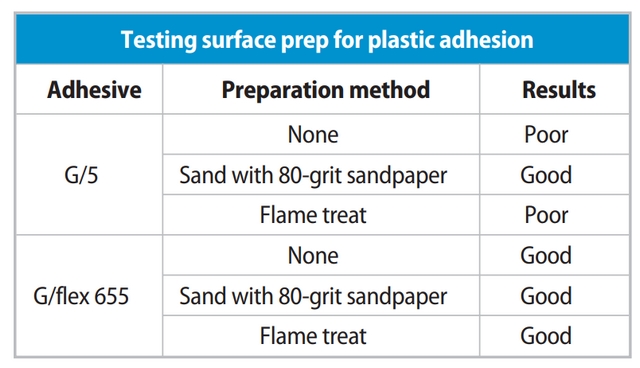 This method of testing doesn’t show which surface preparation or adhesive provides the strongest bond. It shows only whether the bond is strong enough that the plywood fails first. Using our Pneumatic Adhesive Tensile Test Instrument (PATTI) is one way we can measure the exact strength of the bond. For many applications, including my engine cover, exceeding the strength of the plywood is acceptable adhesion.

Since the area I had to repair would be difficult to sand and the joint did not fit together tightly, I decided to use flame treating and G/flex 655 to repair the plastic engine cover. I used duct tape to hold the small tab in position (image 3, below). 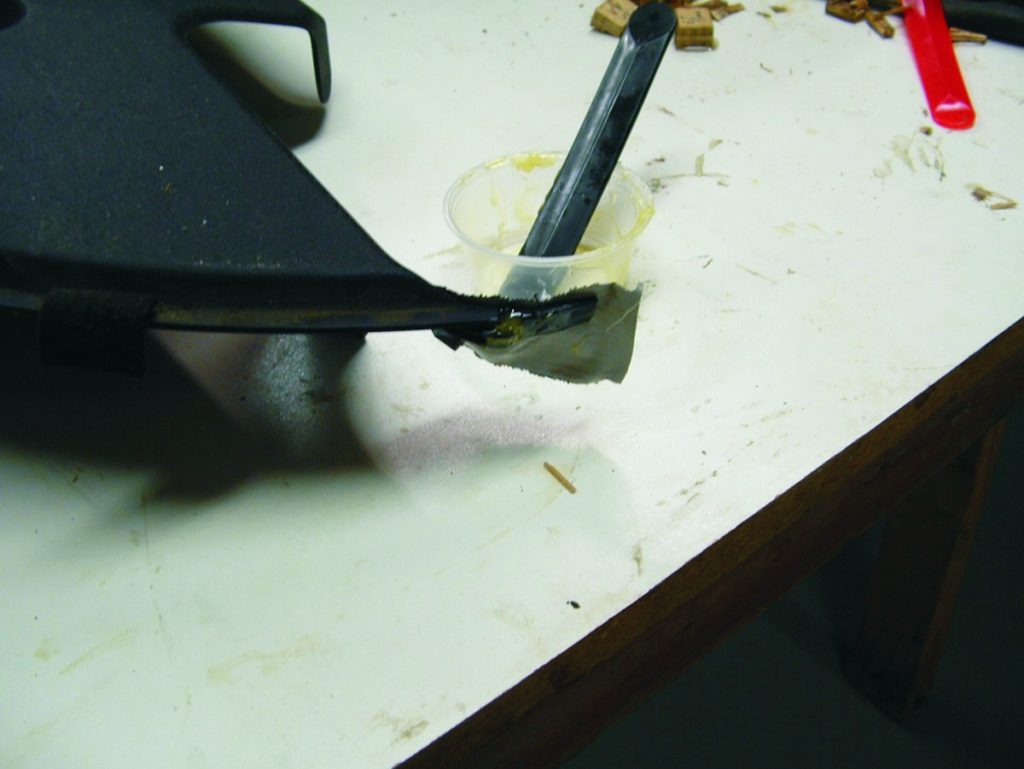 3—Fixing the broken tab with G/flex 655 and flame treating.

It was easy to remove the tape after the epoxy cured. I was then able to install the cover back on the engine just like before it was broken (image 4, below). 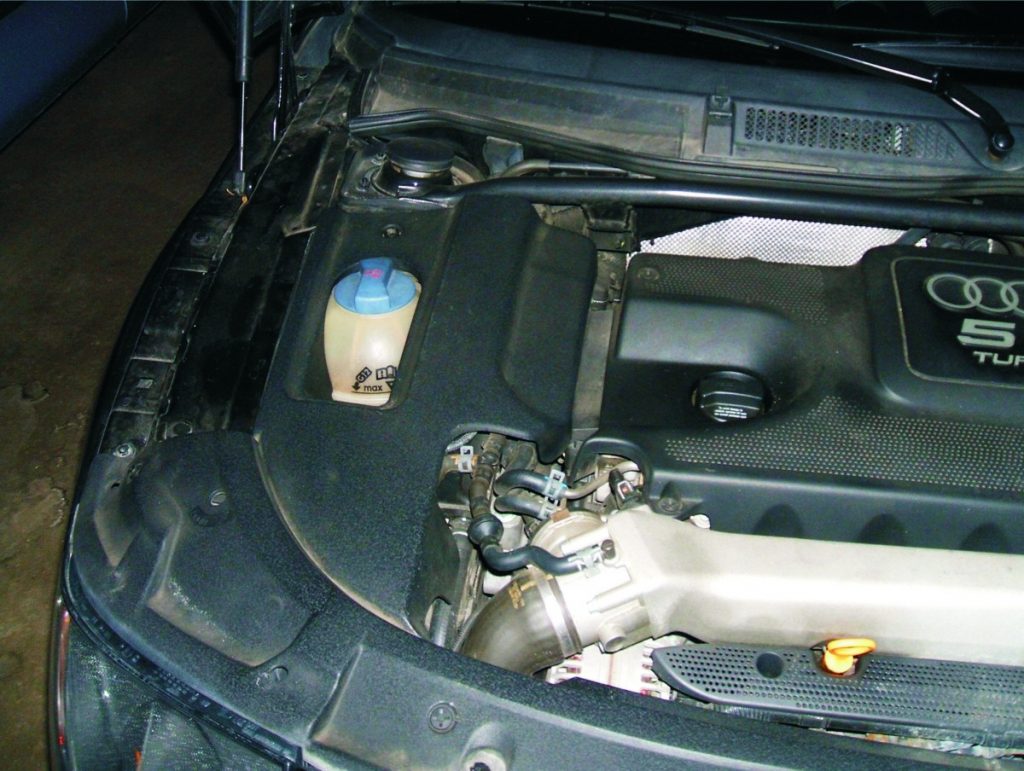 4—The repaired cover back in place in the Audi.