“It takes a lot to laugh, it takes a train to cry…”—Bob Dylan

I received a call out of the blue from an old sailboat racing friend, Gary Plezia, who is now the owner and founder of Southern National Track (SNT) which he began after leaving Conrail in 1996. SNT is a regional railroad company based in Florida certified and licensed in the southeastern United States from Texas east to South Carolina. SNT specializes in building and maintaining railroad tracks and complex switches, track beds, gradings and drainage, crossings, signals and platforms as well as crane rails for ports and industrial clients.

We got talking about his business and Gary mentioned he uses WEST SYSTEM® 105 Resin/209 Extra Slow Hardener thickened with standard big box store high strength grout blended in a concrete paddle mixer until the epoxy/grout mixture reaches a flowable viscosity much like jar honey. Gary told me “Other industrial epoxies I can use for this process cost about the same, but the primary reason I use WEST SYSTEM Epoxy is due to the range of hardeners and cure speeds for these deeper pours. I could not get away with making a series of 3″ depth pours with anything else out there. To my knowledge, and 46 years of railroad track construction experience, I am the only one in the industry making concrete railroad crossing repairs in this manner! I have some repairs where we used this technique and they are 15 years old now and still going strong.”  He proceeded to share some of his typical projects. 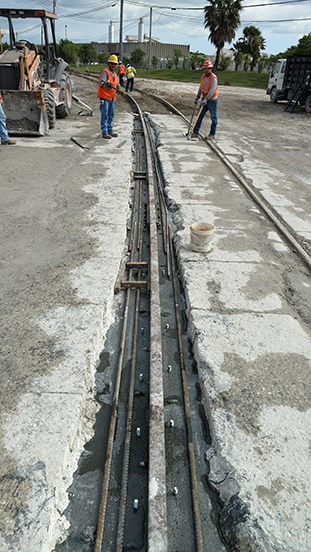 Photo A: Reinforcing was added to brace the rails. The grout pour is at 5″ deep. 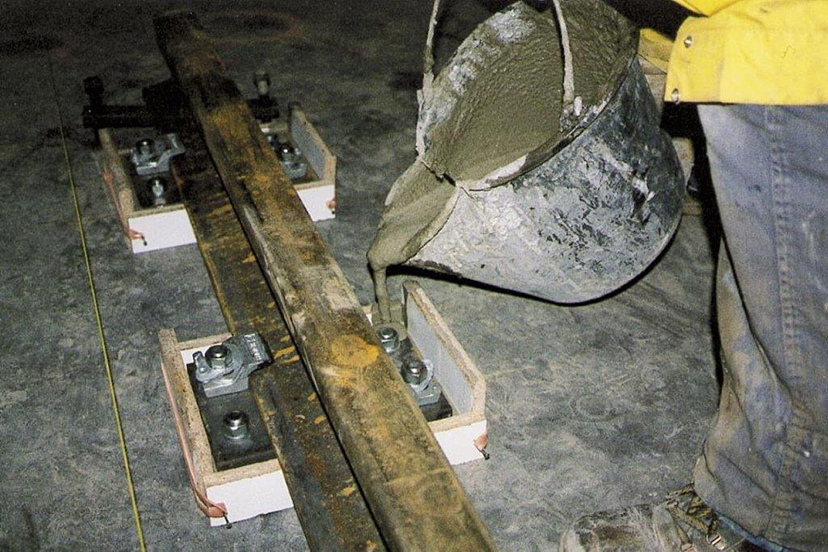 Photo B: Epoxy grout is being poured into the wooden frame.

The steel ties originally suspending the rail in a solid concrete pour, now about 15 years old, were found to all be broken once the concrete was jackhammered away. The broken railroad ties in this sharp 17-degree turn allowed the rails to spread apart. As a result, before repairs could be scheduled, the rail broke apart expanding the repair area to an 80-foot section. The trench was widened using a 90# air chisel plus deepened about 4″ under the steel ties. The removed concrete was replaced with the epoxy grout to a total depth of 11″–12″.

Photo A shows the pour at about the halfway point—about 5″ deep. We can see the extra rebar being added at this point parallel to the track. The square bars running perpendicular to the track are 2″ solid bar steel fabricated by SNT that function as additional bracing between the rail and the concrete side wall. This is all then buried under the epoxy/grout mixture.

In photo C, we see the rail replacement with pour progress at about 75% of the final depth. Notice the 2″ perpendicular braces are now buried under the epoxy grout and another run of rebar has been added. The silver bolts sticking up through the epoxy grout were improvised on site to suspend standard rail tie bearing plates added every 24″ to give the rail additional load-bearing capability within the grout. 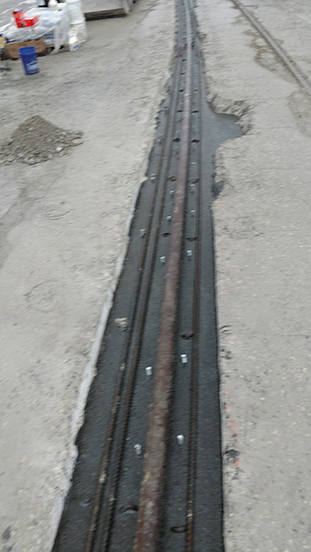 This gravel mine railroad crossing operates 24/7 with trains and thousands of dump trucks crossing it daily. The locomotives alone that operate on this 17° curve weigh 300 tons. This repair has been in operation for about 10 months and the epoxy grout is performing perfectly.

This project was originally supposed to be only a 40-foot section but once the damage already described was discovered the project doubled in scope to 80 feet of the rail section. The SNT crew had planned to use 2 drum kits of 105/209—which would now not be even close to enough epoxy. They ended up emptying every West Marine store from Homestead to Ft. Pierce, FL of their 5 gal. C-group kits—30 in all! Their efforts paid off—the job started on a Friday and was completed Sunday evening and trains were running on it Monday morning.

In the featured photo (top), a SNT crew installs a new crane rail at a power company coal pier. A very large excavator type of coal “scooping” machine (seen in the background) that unloads 160′ coal barges and runs on 2 crane rails spaced 40′ apart.

SNT employs a 12″ wide continuous steel bearing plate that is first epoxy pinned to the concrete pier. They set forms 1″ beyond each side of the rail bearing plate and pour in epoxy grout 2″ thick until it flows up evenly onto the opposite side. The epoxy grout is known to expand about 4% with curing which nicely snugs up the bearing surface under the steel plate as compared with cementitious grout that shrinks 4% with curing often leaving voids.

Photo B, from a different job, shows what was happening in the preceding photo—but it happened in the cement pier, not on top of it like this particular job. Here the rail and individual steel bearing plates are suspended above the floor and the epoxy grout is poured into the wood frame to the bottom of the bearing plate. This is for an indoor crane runway at a steel company. 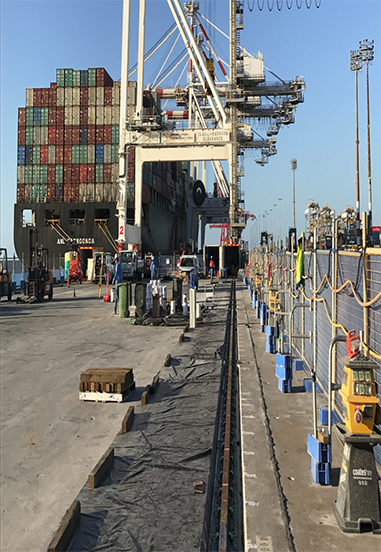 This project involved a Port crane rail replacement. The base plate supporting the rail was cast with epoxy grout 2″ thick. The owner specified a 12 kpsi load bearing for the grout and this was easily met using the SNT system.

It’s always interesting to me learning about the various ways people think outside the box using WEST SYSTEM Epoxy for unique applications.

Now back to that Dylan song—“Well I ride on a mail train baby, can’t buy a thrill…”