Cover Photo: The Whalebone Arch is a historic monument in the Falkland Islands, restored with WEST SYSTEM Epoxy.

The problem of how to restore two tons of decaying whalebone daunted John Smith, curator of the Falkland Islands Museum in Stanley. The Falkland Islands Company had built an arch of four enormous blue whale jawbones to commemorate the Centenary Celebrations in 1933. Fifty-eight years later, the logistics of restoring the historic monument added up to a whale of a headache.

The 21-foot arch, which stands near the Christ Church Cathedral in Stanley, was in dire need of repair. Exposure to the elements had caused the bones to crack and peel, and rot had produced immense cavities. In addition, fungus, salt, grime, lichen, and mosses plagued the structure. At a half ton each, the bones were difficult to move, yet it was not feasible to restore them in place. To make matters worse, it is a slow process to get repair materials to the Falkland Islands from the United Kingdom, several thousand miles away.

Smith contacted Tim and Pauline Carr for help. They were wintering at Stanley aboard CURLEW, their 28′ gaff-rigged cutter. Over coffee, the three discussed repairing the arch. Smith knew little about WEST SYSTEM® Products and had only a leaflet describing them. But the Carrs were old hands with the epoxy: they’d used it to restore CURLEW’s hull in 1984. They assured Smith that the arch could be restored with WEST SYSTEM epoxy, and agreed to do the work.

The first step was to take the monument apart. During the dismantling, two of the bones were broken off a few feet from the base. But the Carrs would soon mend even this large-scale damage.

After the dismantling, the bones were power washed to remove the lichen, mosses, salt, and grime.

A week later, the bones were put under cover in the nearby Christ Church Cathedral to dry with the help of heaters and a hot air blower. During this drying time, the Carrs figured out what materials would be needed to make the repairs. There is no air freight service to the islands, so there was no margin for error in determining supply needs. A miscalculation could result in a very long wait for additional repair products.

They ordered WEST SYSTEM Epoxy from Wessex Resins & Adhesives in Southampton, England. Wessex sent the products to the Falklands on a monthly supply ship. With everything now in place, Tim and Pauline Carr began the whalebone arch restoration in earnest.

First, they removed loose pieces of bone, then used a power planer to roughly fair the 21-foot lengths. Next, they re-attached the two broken ends by drilling 1 1/4″ holes and inserting 1″ bronze rods. These rods were liberally coated with WEST SYSTEM epoxy thickened with low-density filler, and the “end grain” of the bone matter was saturated with unthickened epoxy. A series of Spanish windlasses brought the bones together, leaving only a very fine line at the joint.

Now it was time to saturate the bone surfaces with a mixture of WEST SYSTEM 105 Resin and 207 Special Clear Hardener. The Carrs prepared by warming the cathedral as much as possible and then heating the epoxy as well. The warmth allowed maximum penetration of epoxy into the bone surface. They applied the epoxy with 4″ brushes, wet on wet until puddles formed. 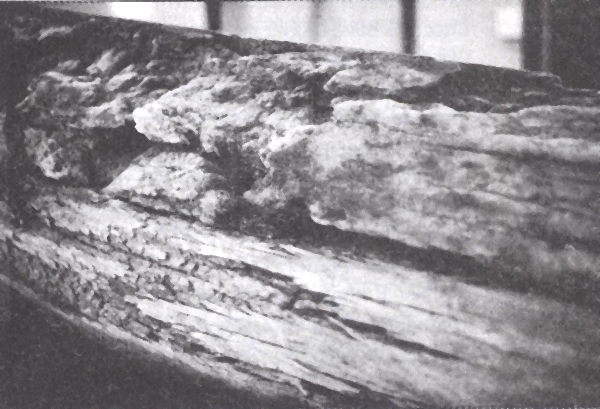 Exposure to the elements caused the bones of the Whalebone Arch to crack and peel. Rot produced immense cavities Fungus, salt, grime, lichen, and mosses plagued the structure.

The decayed bone was extremely porous. Working section by section, the Carrs applied more than 20 thick layers of epoxy. The bones absorbed 300 kilograms of epoxy during this stage.
After partial cure, they filled the holes and cavities with epoxy thickened with low-density filler and bone fragments. They carefully tinted this mixture grey to match the original bone color. During this hole-filling stage, they kept the whalebone nerve passages clear with wads of plastic sheeting.

Now they were ready to fair the giant jawbones, using a power planer, belt sander, and hand plane. A grinder was used judiciously to smooth the hollows.

They followed this fairing-out by applying a second, finer filler mix (again, epoxy, low-density filler, bone fragments, and grey tint). To achieve final fairing, the Carrs used two-man longboards and worked through the sandpaper grades. During this tedious task, they redubbed the longboards “torture boards.”

It was time to move on to the concave inner surfaces, which had weathered far less than the outer surfaces. The bone here was still very dense. It cleaned up so well that the Carrs decided to add only a clear finish of four coats of unthickend epoxy. By contrast, the “spongy” outer surfaces were now 60% filler. To camouflage this, they were coated with four coats of tinted epoxy. Next, the Carrs gave each bone 3 coats of 2-part polyurethane varnish.

To create a texture very similar to that of the original porous bone surface, they sprinkled table salt liberally over the final varnish coat. Forty-eight hours later they washed the surface to dissolve the salt, leaving tiny pores in the surface to mimic the original texture. They added black pigment to varnish, making it dusky, and then rolled on a coat to blend together the differently finished surfaces.

But they were not quite finished with their work. Now the bones had to be rolled over so the under surfaces could be treated. This was no small task: the bones weighed a half ton each, so it took eight strong men just to turn them over.

For the final step, the Carrs applied blackened polyurethane with an artist brush to cover and fill low spots and sharp edges. Then they allowed the project to harden for 10 days.
At last, the double doors of the cathedral were opened. In a great combined effort, the Department of Public Works, Cable and Wireless, and the Falkland Islands Museum staff erected the arch in one long workday.

Now residents and tourists can enjoy and photograph the restored monument, which should endure well into the 22nd century. 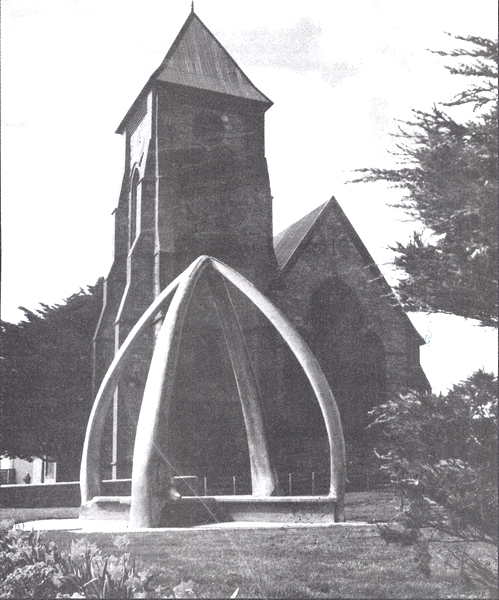 The Whalebone Arch is built of four blue whale jawbones and restored with WEST SYSTEM Epoxy. The monument was built in 1933 outside the Christ Church Cathedral in Stanley, Falkland Islands.