Above: A putty knife scraper is being used as a push scraper.

I was intrigued with how quickly he could smooth the epoxy with his scraper and particularly how he could get the epoxy to come off the surface in a continuous thin ribbon similar to wood shavings from a sharp wood plane. Bill was passionate about the benefits of scrapers and felt they were seriously underrated tools. He liked the absolute control you have in removing epoxy with them. Leaning the tool forward a little more or less and varying the downward pressure on the tool has a profound effect on how aggressively or how carefully material is removed.

Scrapers are versatile tools that can be modified to match nearly any shape. Even imperfections on intricate concave or convex surfaces can be removed with scrapers custom ground to match the profile. Thin scrapers can be bent to remove material inside shallower concave surfaces or bent around convex shapes (below). Flexing the scraper allows you to selectively remove material, such as epoxy drips or areas of raised wood grain, on projects that have been coated with epoxy. 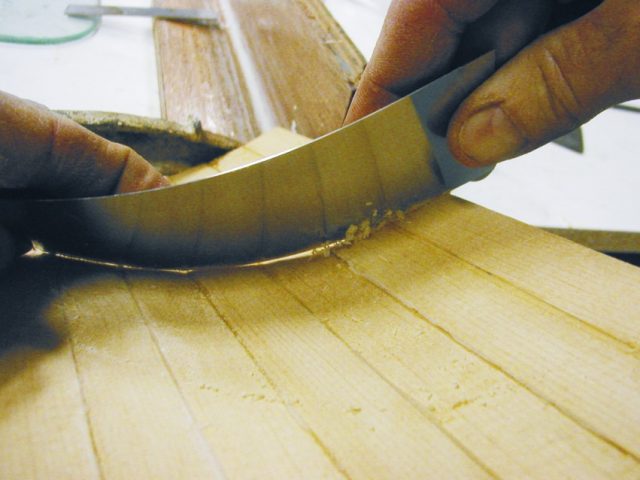 Thin scrapers can be bent to remove material inside shallower concave surfaces. 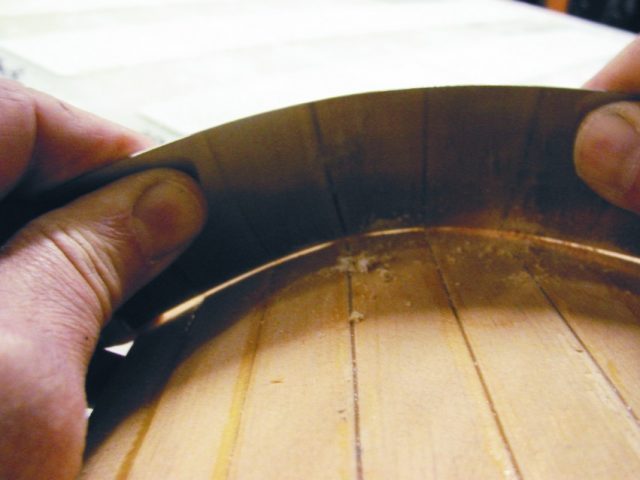 Flexible scrapers can be bent around convex shapes.

Left-Thin scrapers can be bent to remove material inside shallower concave surfaces. – Right-They can be bent around convex shapes.

Scrapers can also be used to smooth epoxy that has not cured fully. This can speed up a bonding or assembly operation in that you do not need to wait for epoxy to cure fully before it can be sanded. Additionally, scraping epoxy, especially green epoxy, reduces your exposure because the epoxy does not become airborne as it does when it is sanded.

Cabinet scrapers are typically made of hardened steel so they maintain a sharp edge. Even so, they require frequent sharpening, and they only work well if they are sharp. The expert cabinetmaker usually sharpens the edges with a hand file and then puts a “hook” on the edges with a burnishing tool. With the scraper in a vise, the edges are trued to 90° with a file. Then, with multiple passes along the edge with a hardened steel burnishing tool, the edges are turned or flared to make a slight hook on each side. This puts a sharper angle on the actual cutting edges than the 90° square corners made by the file. The more the edge is burnished, the deeper it will cut. Edges can be tuned for fine or heavy use. The hooked edge is particularly useful when scraping wood, especially soft wood.

I often use another cruder method for sharpening scrapers. I simply sharpen them on a bench grinder, with the tool rest set perpendicular to the grinding wheel. A medium to fine grinding wheel produces a crisp 90° corner on the scraper. This method allows you to sharpen and shape scrapers quickly for specific tasks. Renewing the edges takes very little pressure on the grinding wheel, but shaping scrapers for specific tasks can generate some heat. Avoid overheating the scraper while grinding because overheating will soften the steel and shorten its useful life between sharpenings. Keep a tray of water handy and dip the scraper in periodically to keep the metal cool. The bench grinder produces a fine burr on the edges that seems ideally suited for removing hard coatings like cured epoxy and dried 2-part polyurethane paints.

Making your own scrapers

You can also use the bench grinder to modify other tools to be used as specialty scrapers. For example, tech advisor Brian Knight (retired) modified a steel putty knife to create a flexible scraper. He likes this tool for removing raised wood grain on epoxy-coated surfaces. Brian uses the putty knife (turned scraper) as a push scraper for some jobs, but more often as a pull scraper by holding the blade vertically against the surface and pulling the tool (below). 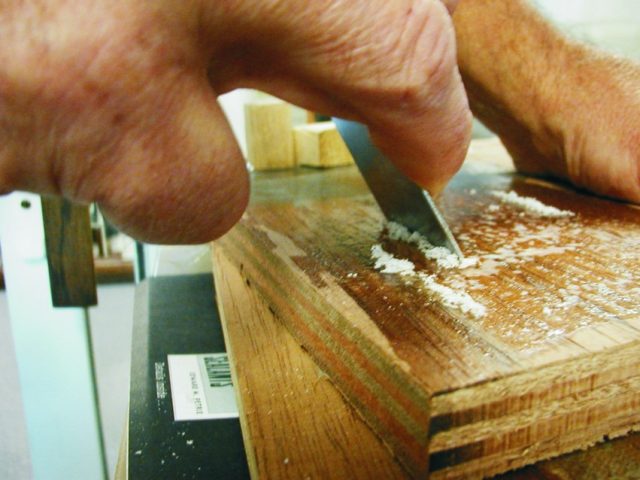 The putty knife scraper is used as a pull scraper by holding the blade vertically and pulling the tool.

You can make similar modified tools from wood chisels. By grinding an 80° bevel on the chisel end with a bench grinder, you effectively turn the original chisel into a bull-nose scraper. Use the tool by holding the handle close to the surface and pushing it forward to carefully smooth rough surfaces. You can also position the handle upward and pull the tool to you to aggressively remove cured glue, rough wood or dried paint.

While you can purchase cabinet scrapers from fine woodworking tool sources like Lee Valley & Veritas, you can also make them from metal salvaged from a variety of sources. Worn tools made of high carbon steel, such as plane blades, hacksaw blades, chisels, handsaws, and Japanese pull saws, are excellent sources. Some of the best scrapers found in Gougeon shops have been made from salvaged power hacksaw blades. Because of the excellent steel in the hacksaw blade stock, these scrapers hold their edge better than many store-bought scrapers. If quality steel isn’t available, you can use low-carbon steel in a pinch. You can even grind flat steel washers sharp on a bench grinder and use them for scraping concave wood moldings. They can be particularly effective at removing burnishing marks left from routers and shapers. You can use ViseGrip™ pliers to hold these small custom-made scrapers (below). 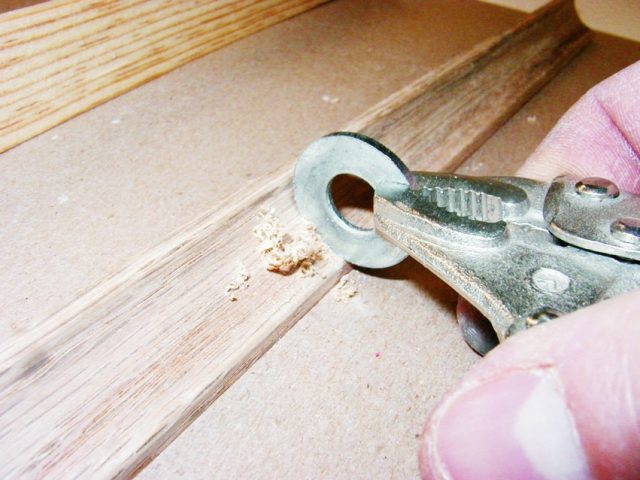 Flat steel washers shaped and sharpened on a bench grinder are useful for scraping small concave surfaces like wood moldings and epoxy fillets. 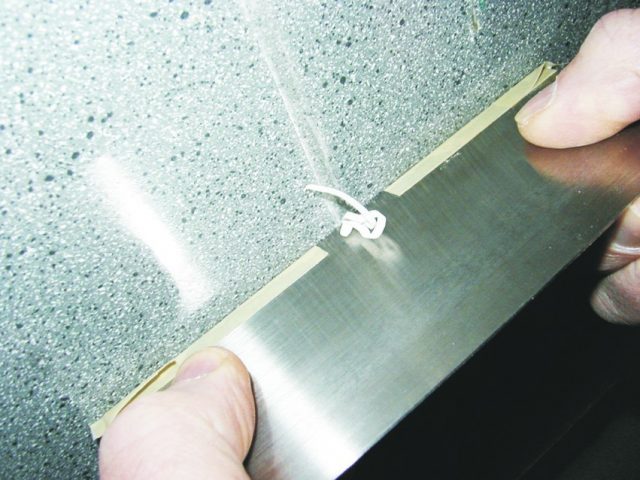 Tape can be used to isolate a small section of the scraper’s edge to remove drips or clean up seams without affecting the surrounding area.

Flat steel washers shaped and sharpened on a bench grinder are useful for scraping small concave surfaces like wood moldings and epoxy fillets.

Here’s a tip that works great for removing cured drips of epoxy or hardened paint from finished surfaces. Use a flat flexible cabinet scraper or a hacksaw or reciprocating saw blade scraper. If the drip is ½” wide at its widest point, take two pieces of tape and cover all but the center one inch of the scraper’s edge. The tape will isolate the scraper’s sharp edges from everywhere except in the middle where you want them exposed to remove the drip. Duct tape and fine line painter’s tape work well for this and you can use more than one layer if the tape is easily cut by the sharp edge.

To remove the drip, lean the scraper forward with the uncovered mid-section of the blade positioned directly over the drip. Push the scraper along the length of the drip several times with the blade perpendicular to the drip (below). If the scraper is sharp, each pass of the scraper will remove a thin shaving of epoxy from the surface. The scraper will automatically stop removing epoxy when the tape covering the scraper touches the smooth surrounding area. At that point, the epoxy drip will only be proud of the surface by a few thousandths of an inch (the thickness on the tape). If the scraper is slightly flexible, you can remove the rest of the epoxy with a few more passes after removing some of the tape near the center. You can also use a small piece of wet or dry sandpaper wrapped around a small, hard sanding block (¾”×1″×1″ works nicely) to remove the remaining epoxy.

Tape can be used to isolate a small section of the scraper’s edge to remove drips or clean up seams without affecting the surrounding area.

This scraper method also works great for removing excess epoxy from small holes or repaired stress cracks that have been over-filled with epoxy or polyester gelcoat.
Overall, scrapers can be efficient and versatile tools for working with epoxy.