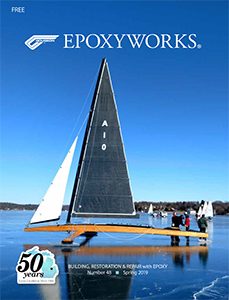 Michigander is 40-feet long and weighs 1,400 pounds. It’s in a class by itself and is one of the largest ice yachts sailing anywhere in the 21st century.

Sawyer built this monster of an iceboat in a second-story garage workshop with the efforts of a friend.

He won every race in a fleet of eight at the 2019 Northwestern Ice Yacht Association regatta January 19 and 20 in Lake City, Minnesota. The waterfront there is an expansion of the Mississippi River known as Lake Pepin. 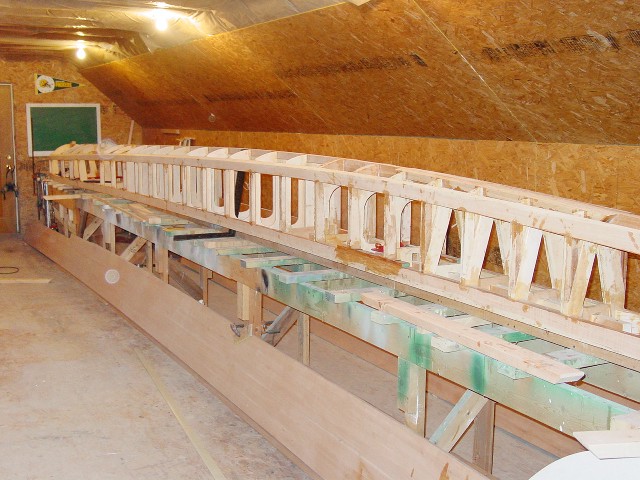 While becalmed on a frozen Montana reservoir for five days in 2004 with fellow ice-seekers from the West Michigan Ice Yacht Club, Sawyer hatched the idea of building a new fuselage that would be half the weight of the original. With his friend, and crew member, Jay Yaeso, he drew up plans based on proven designs and began construction in Yaeso’s Green Bay, Wisconsin garage. Michigander sailed her maiden voyage in March 2011.

It took 10 week-long trips to Green Bay, much sawing, clamping and 40 gallons of WEST SYSTEM Epoxy for Sawyer and Yaeso to build the hull from Sitka spruce. When it was finished, they hired a crane to lift the fuselage through a second-story window to a waiting truck.

Sawyer also built a 45-foot enclosed trailer to carry Michigander, her 39-foot mast, 28-foot plank, and runners. The components ride on a caster-mounted dolly that slides out a rear hatch. The weight of the loaded two-axle trailer is 3,500 pounds. It takes three sailors an hour to rig the boat and ready her to sail.

Sawyer’s roots are on Lake Michigan’s Green Bay. He has sailed ice yachts all his life and continues a family tradition by sailing this design, which dates from the 19th-century.

When the Soo Locks, which connect lakes Superior and Huron, close for the winter, Sawyer devotes time to boat building and sailing. Sawyer, 54, works as the captain of Great Lakes cargo vessels. When not at sea or iceboating, he lives on White Lake in northern Muskegon County, Michigan.

And he has other projects in the works. “That’s the beauty of an iceboat. They’re never done.”

He grew up sailing a kid-sized stern steerer, and has owned a Renegade and a Skeeter, but always wanted a big stern steerer. In 1990, he brought home a 40-foot stern steerer named Eclipse from Pewaukee, Wisconsin. After the mast and plank were broken in capsizes, he built replacements from lighter materials using composite construction.

For every hour of sailing an iceboat, there are many more hours of building, traveling to the ice, setting up, waiting around for wind, and repairing the boat when it breaks. To spend as much time sailing Michigander as he’s spent working on it, Sawyer says he would have to live 200 years.