Above: The final version of the test Brian devised to determine the holding power of bolts epoxy bonded into concrete. When the load cell registered 4000 lbs, he stopped the experiment.

The email exchange with Bob Warters in the article Installing a basketball goal is typical of the process we sometimes go through to answer a technical question. Most questions do not generate laboratory testing, but, in this case, the data we had available was limited. I was able to give Bob some shear strength data on concrete block from previous tests but was unable to find specific data on fasteners bonded with epoxy into poured concrete. I suspected poured concrete would hold a bolt better, but another data point would be reassuring.

To determine the holding power of a bolt bonded into concrete, I devised the test shown in the photos below. Using 105 Resin and 205 Hardener, I glued an eyebolt into our shop floor. I used a ½” × 13 tpi wrought eyebolt with a thread length of 1-5/8″. I drilled a 5/8″ diameter hole 1-5/8″ deep into the shop floor and vacuumed out the dust. I filled the hole with epoxy, coated the threads of the eyebolt with epoxy, pushed the bolt into the hole, and mopped up the squeeze-out. 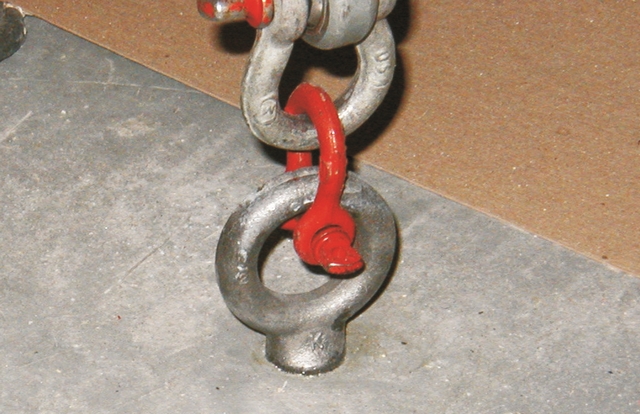 After allowing the epoxy to cure over the weekend, I attached a clevis to the bolt.

After allowing the epoxy to cure over a weekend, I attached a clevis to the bolt (photo 1), attached a load cell to the clevis, attached another clevis to the top of the load cell, and attached a heavy chain to the upper clevis. The load cell (shown in photo at top) is a device for measuring the tensile load being applied. I wrapped the chain around a large floor jack.  I started jacking and got the load up to 2300 lb when the chain failed. Obviously a poorly designed experimental procedure.

I went back to the drawing board and came up with the set-up shown in Photo 3 (top). This time I used a 3/8″ eyebolt installed through heavy wall steel tubing. This was a much better set-up because the load was now being exerted in a straight line—no more wrapping chain around a jack. I started pumping the hydraulic jack and, according to the digital readout from the load cell, got up to about 1800 lb of applied load when the upper eyebolt failed.

This was getting monotonous. Undaunted, I purchased a ½” wrought eyebolt from the local hardware store, enlarged the hole in the steel tubing, and tried again. This time the load got up to 3000 lb without any failures. I felt that it was getting dangerous, however, so I covered the set-up with a heavy furniture pad and a big piece of heavy foam rubber to contain the shrapnel resulting when the glued-in bolt came out of the concrete. I continued pumping on the hydraulic jack. When the load cell registered 4000 lb, I stopped the experiment. I was getting concerned that when the bolt pulled loose, the load cell (and probably I) would get damaged.

After I had complained about my inability to pull the eyebolt from the shop floor, one of my fellow technical staff members pointed out a small mistake in arithmetic I had made. It is amazing what a little extra surface area will do for the strength of a glue joint.

Even though I could not establish the maximum load, this eyebolt/concrete/epoxy combination could handle, I know that it is capable of holding 4000 lb. With about 3¼ square inches of surface area in the hole, the load per square inch of hole surface is 1230 lb.

Going back to Mr. Warters’ backboard project, each hole has about 11 square inches of surface area. If we use 1230 lb per square inch as the holding power of concrete, each bolt should be able to hold 13,500 lb. I think at this point, the breaking strength of the bolt becomes an issue. Bob has used 6 bolts for a total holding power of 81,000 lb.

It was quite an adventure trying to extract the eyebolt from the floor, and, eventually, I had to heat the bolt with a torch to soften the epoxy and twist the bolt out. There is nothing as satisfying as a well designed and executed scientific experiment.