In March of 2013, after 42 years, my mom and I sold the family business that she and my dad started in 1971. I was still in high school when I started working for my parents, and as a result, I have never filled out a job application or been to an interview. At 56 years old I wasn’t about to start now! So in the spirit of following one’s own path I turned my hobby into a new business and opened Nelson Niederer Woodworking.

My wife Jodi and I converted an old laundromat building on Broadway St. here in Bay City. Finally, I had my name in lights on Broadway. Previously my garage served as my shop. Many of you will appreciate the routine – unplug the table saw and move it to plug in the planer, etc. Now I have the room and power to have all the power tools plugged in at the same time.

Bob Reed, a friend and old customer from our party store days came to visit my new shop and asked me to restore a 1964 Chris Craft Super Sport 17. The story behind this particular boat is quite a tale. While Bob was growing up, his family had a ’64 Super Sport 17. He had fond memories of learning to ski behind it. Now, at 52 years old, he has reached a point in his life where he has the resources to find, purchase and restore a boat like the one from his childhood memories. He found a promising prospect on eBay right here in Michigan and checked it out. The owner gave him all the old paperwork he had for the boat. In the owner’s records he found his family’s name—this was, in fact, the exact same boat he grew up with! Forty-six years later, it’s back in the family. 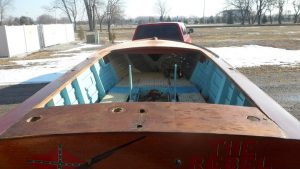 The emptied boat before work began

We started the restoration in the end of February 2013. I hadn’t yet moved into my new shop so I rented some shop space. The first chore was to strip everything to the bare hull – engine, seats, and windshield – everything, in order to flip it and start on the bottom first. The flip proceeded smoothly with a little help from my friends. There is a time-lapse video of this rollover on YouTube. The bottom was trashed. The previous owner had hit something and drove the prop up through the bottom of the hull. The strut and rudder were broken off. The motor had, for a lack of a better term, blown up and spewed oil throughout the bilge. The boat was left in this condition, covered with a tarp and parked in a building for 18 years. 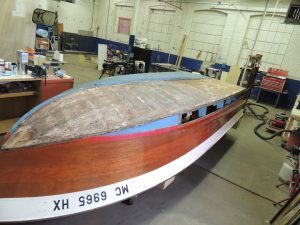 The boat rolled over with half the bottom removed.

Now with the boat upside down, we began the tedious chore of disassembling the bottom. The bottom is mahogany planks over a plywood underlayment. Removing over 1600 slotted screws was quite a chore – some came out easily while others had to be drilled out. We soon discovered that a plug cutter was the best tool to cut around the head of problem screws which allowed us to pull the screws out by grabbing the heads with vise grips. We numbered and saved the mahogany planks as templates for making new planks later. The plywood was nailed to the frames, a common practice in 1964, which made it difficult to remove them intact to save as templates. 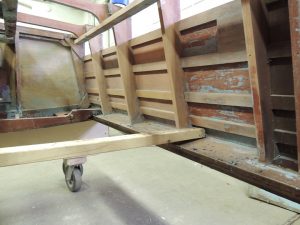 With the bottom removed, we stripped and sanded the inner hull sides to bare wood. Each plank seam had a ¾” batten covering it and we filleted each one top and bottom1 with WEST SYSTEM 105 Resin/206 Slow Hardener thickened with 406 Colloidal Silica. The longitudinal stringers had some small rotted areas so we dug out the bad wood and filled it with the same thickened mixture and coated the interior with 105 Resin and 207 Special Clear Hardener. Once the epoxy was cured and sanded we painted the entire interior with Chris Craft mahogany bilge paint. 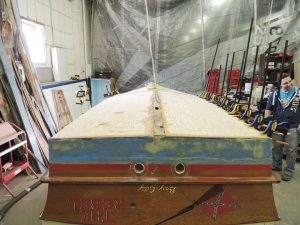 The bottom of the boat restored with new plywood.

Now it was time to reinstall the bottom beginning with new outdoor grade Douglas fir2 plywood. The sections were cut to shape (using the old ones as templates) and coated with two coats of 105/207. We paid close attention to the edges where all the end grain is. The sections were then dry fit and holes drilled for the new SS screws. Next, we removed the fitted plywood sections in order to apply glue and then bond them to the stringers and chine log using G/flex 650. 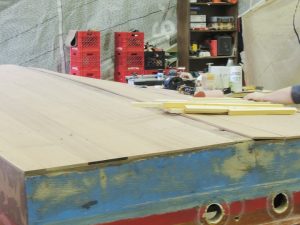 The reinstalled and new mahogany planking

The next job was to cut new mahogany planking, again using the old planks as templates. I decided that the first plank on each side needed replacing, so we removed the old ones and cut new ones. These planks went on before the bottom planks, getting glued to the chine log with G/flex 650. After dry fitting and making any necessary adjustments we installed the bottom planks by applying G/flex 650 to both the plywood and mahogany. These planks were all edge glued together as well.

We cleaned all the seams on the hull sides using a custom tool our friend Bill Bauer loaned to us. Once all the seams were opened we installed mahogany splines using 105/207, hammering them gently into place.

The next day we used a sharp chisel to trim the excess spline sticking out.

After two weeks of intensive stripping and hand sanding, always in the direction of the grain fore and aft, what I had was a bare hull ready for finishing. I applied six coats of epoxy to the bottom, wet sanding between coats to make it smooth as glass. Now we thought we were ready for Interlux® 1959 hard copper /bronze racing paint, but I forgot the golden rule – always read the directions! The directions say to hand sand with 100 grit paper. So we had 20 hours of needless sanding behind us only to rough it up again.

Moving to the hull sides we applied Interlux Interstain® 573 Chris Craft Mahogany. I was very pleased to find that the splines were really hard to see after staining. I had to look real close to find them. At this point, we flipped the boat upright and placed it on the trailer. We made and installed new floorboards, seats, engine box and dashboard. We were forced to build the new dashboard because the previous owner had cut a hole in the dash to install an 8-track player. Bob took care of all the mechanical aspects of the restoration – rebuilt engine and transmission, electrical wiring and the gauges which were sent out and restored to original. All the chrome was sent out and re-plated.

While all this work was underway at the various shops around town, we applied six coats of Captain‘s varnish to the hull sides and any interior surfaces left natural mahogany. When the varnish was fully cured we took the boat to an auto body shop known for their painting expertise. They painted on the white coping stripe, then sprayed on two coats of automotive clear. The bottom paint helps bring the old boat back to life.

We took the boat to Dave Julian of Linwood Upholstery and he installed period-specific vinyl on the deck and recovered the seats. Finally, all the rebuilt parts and the restored hull came back into my shop for final installation.

In every aspect, the Rebel was restored and rebuilt to be as original as possible. This was the first job in my new career and I can’t say enough about the great work Bob and Jennifer Reed did. They didn’t want any corners cut. Bob tirelessly searched for the correct parts from all over the country. All of our hard work really paid off.

In August of 2014, we took the restored boat to the 37th Annual Antique Wooden Boat Show in Hessel Michigan, in the beautiful Le Cheneaux Island area on the southern shore of the Upper Peninsula. The boat, renamed Passing Through Time—Rebel II, earned 2nd place honors. Bob and Jennifer are happily enjoying their “new” boat and the success of the project opened doors for more restoration work at my fledgling shop. Not knowing where this woodworking journey would take us, we now have finished projects in three states and sent fudge making paddles to England. We completed restoration work at the Grace Dow Library in Midland, Michigan. We restore antique furniture and build new custom furniture which led to a job in Southfield, Michigan refinishing 10 floors of office furniture for Federal Mogul Corporation.

Currently, we are restoring a 1915 Defoe dingy for the Amycita that was donated to the Saginaw River Marine Historical Society Museum (see article).

I am very excited about a personal project we’ve just begun—restoration of a 1955 Cadillac hot-molded 14’ Runabout with my brother Bruce and my son-in-law, Brian. We plan on showing it in Hessel in 2016.

The boat rolled over with half the bottom removed.

The emptied boat before work began

The bottom of the boat restored with new plywood

The reinstalled and new mahogany planking