Craftsmen and volunteers are building the World’s largest wood/epoxy tall ship at a boat yard in England. The 65-meter three-masted barque was ready to set sail in the year 2000. Her crew, a blend of physically disabled and able bodied sailors, will navigate the ship around the United Kingdom and Europe.

The Jubilee Sailing Trust (JST) is the driving force behind this remarkable ship. This charitable organization formed in 1978 to help integrate the physically disabled through tall ship sailing. They now operate the STS Lord Nelson, the first square rigged sailing ship designed so disabled crew members can sail on equal terms with the able-bodied.

In April 1996, the JST took over a derelict boat yard in Southampton. They refurbished it into a production facility with a visitor’s center and a viewing gallery. By this time, they had decided to build a strip-planked ship using Siberian larch and laminated frames. All of the ships timber comes from readily renewable sources.

The yard produced the first timber laminate in June 1996. “Had you seen the condition of the yard, which the trust took over only a few months earlier, this, in itself, was a major achievement.” Said Roy Oliver, President of Wessex Resins & Adhesives in Romsey, England, one of the project’s supporters.

The JST lofting team drew out the ship’s full scale displacement Line Plans on a scrieve board—an enormous drawing board laid down on the mold form. The building crew then used steel framed laminating tables with hydraulic rams to produce the beautiful laminates shaped to match the molds. They built ring frames from 8mm thick Siberian larch bonded with WEST SYSTEM® 105 Resin and 205 Hardener, thickened with 406 Colloidal Silica.

The stem piece is the largest pre-fabricated wooden component in the ship. It consists of timber laminates 80 x 8mm thick. “This magnificent spectacle epitomizes the very best of skilled craftsmanship.” Oliver said.

The ring frames are at least 22 laminations thick and many of the major load bearing members have up to 35 laminations. The stern post laminate is the thickest, consisting of 144 x 8mm Siberian larch. The crew has pre-fabricated this short, stocky component, but has yet to fashion it to shape.

“The horn timber laminate is so beautifully shaped that it is almost breathtaking when you see it for the first time. Resembling a question mark, it is a piece of laminate timber which, in a darkened room, could easily be ‘passed off’ as a sculpture” Oliver said.

The wooden frames are now erected in position with the five watertight steel bulkheads the crew fabricated in the yard. The cant frames at the rear of the ship and the horn timber must be erected before the crew begins planking. This next stage should begin soon.

An unusual workforce is building this boat. The Jubilee Sailing Trust employs 27 craftsmen and shipwrights. The rest of the crew are “people from all walks of life, both able-bodied and physically disabled, who volunteer to work under instruction on the various tasks involved in the construction” Oliver said. Members are put through an intensive half day health and safety course, and must show that they can work to these standards. Then they are placed on a small team that works under a permanent member of the staff. So far 550 volunteers workers have contributed more than 30,000 man hours to the project.

Oliver said, “To have WEST SYSTEM epoxy used throughout this build is recognition of its quality and durability but, at the same time, we must appreciate that to be involved with the construction of the world’s largest wooden tall ship for a charitable organization is a privilege.” 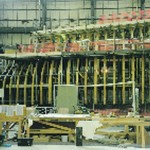 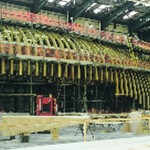 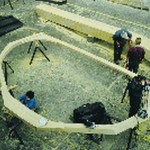 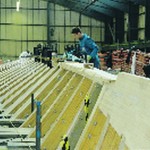 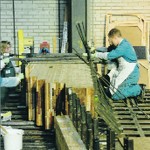