A question frequently posed to our technical staff is “can I thin WEST SYSTEM® epoxy so it will flow or penetrate better?” The answer to that question is “yes, but not without consequences.” Many of the advantages of thinning epoxy are offset by disadvantages in other areas of epoxy performance.

Viscosity is loosely defined as the resistance of a fluid to flow. Higher viscosity values mean the fluid will resist flowing. Water has a viscosity of 1 cP (centipoise) and has almost no resistance to flow while peanut butter, with a cP of 250,000, flows very slowly. The table blow shows several fluids and their viscosities at room temperature.

Thinning epoxy means lowering its viscosity (see table above). Low-viscosity epoxy flows better, is easier to roll or brush, saturates fiberglass fabric quickly, and penetrates more deeply and more easily into porous surfaces like partially rotted wood. There are two methods of temporarily thinning epoxy. One is to heat the mixture and the other is to add solvent to the mix. The goal of both methods is to reduce the epoxy’s viscosity. This article explains what happens to WEST SYSTEM epoxy when it is thinned either by heating the components or adding solvent to the mixture.

Through knowledge gained from our comprehensive test programs and from 30 years of practical experience, we have learned that formulating epoxy is a balancing act. When one characteristic is altered—e.g. changing handling attributes by adding a volatile solvent—other characteristics like moisture resistance and strength are also changed. Our chemists formulate a well-balanced, versatile epoxy that provides excellent structural strength and moisture resistance. If you elect to modify it, you become an epoxy formulator and need to understand the effects of your changes. Armed with the information in this article, you can decide if thinning epoxy is worth the trade off in performance.

There is a perception that epoxy needs to penetrate deeply into wood to be effective. Sometimes this is true, but most of the time it is not. Some common misconceptions are that deep penetration of epoxy 1) makes rotted wood as strong as new, 2) increases adhesion, and 3) makes wood more waterproof. The following is a brief discussion of these points. Rotted wood impregnated with epoxy does not make the damaged wood as good as new. Deep penetration of epoxy into rotted wood will make the wood hard but it will not restore its original strength. This is not important if the rotted material is non-load bearing. A rotted door threshold does not need to be strong, just hard. However, when the wood fiber is damaged, wood loses its ability to carry loads and unless the fiber is replaced, it will not regain its full strength. A rotted deck beam or sailboat mast needs more than epoxy consolidation to return the wood to its original load carrying capacity.

2) Adhesion in all but the highest density wood is not enhanced by deep penetration of the glue into the wood. Research performed at the Forest Products Laboratory showed that adhesion to birch was increased slightly by using thinned epoxy. In lower density wood species like Sitka spruce or Douglas fir, the weak link is the cross grain strength of the wood. It does not matter if the epoxy penetrates 1/4″ into the wood or 5/1000″. The strength of the wood, the amount of surface area and the adhesive ability of the glue determine the strength of a glue joint. Most types of wood glue do not penetrate deeply, yet, if used properly, they can exceed the grain strength. Epoxy is no exception.

3) Water resistance of a piece of wood is not enhanced by deep penetration. Wrapping wood in plastic makes a pretty good waterproof seal without any penetration at all. Likewise, an epoxy coating on the surface is more water-resistant than a thinned epoxy coating that has penetrated deeply into the wood because, in most instances, the epoxy thinned with solvent is porous.

The USDA Forest Products Laboratory developed the Moisture Exclusion Effectiveness (MEE) test. It is a measure of how much moisture is absorbed by wood when it is continuously exposed to 100% humidity. Higher numbers mean the wood has absorbed more moisture while lower numbers indicate less moisture is absorbed. You can see that epoxy with solvent added is not nearly as moisture resistant as un-thinned epoxy (Figure 2). However, if you need an epoxy coated surface that is less of a vapor barrier, thinning WEST SYSTEM epoxy with solvent is a valid way to achieve this

Heating the resin/hardener components and then mixing them together results in a thinned epoxy mixture that, when cured, retains all the characteristics of epoxy cured at room temperature. The viscosity of epoxy is very sensitive to changes in temperature, and warming the components (resin and hardener) and/or the substrate substantially lowers its viscosity (Figure 3). With wood, the best method of thinning epoxy with heat is to warm the wood and have the resin and hardener at room temperature. Mix the components and apply the mixture to the warm wood surface. Remove the heat source just before the epoxy is applied. When the epoxy mixture comes in contact with the warm wood, it gets warm and its viscosity becomes lower. As the temperature of the wood falls, the thin epoxy is drawn in deeply before it begins to gel. By heating the substrate instead of the components, you get the best of both worlds—low viscosity epoxy on the work surface and longer working time in the mixing pot.

Thinning epoxy with heat can create problems, however. Warm epoxy cures much more quickly than you may be accustomed to. Have things organized before you mix the resin and hardener and move quickly. Use one of the slower hardeners—206, 207, or 209—to increase the working time.

How warm is warm? You should be able to comfortably touch the substrate or the component containers when they are appropriately warmed—about 115°F maximum. Excessive heat will cause the epoxy to harden too fast, especially in thick applications. Very rapid cure will overheat the epoxy. If smoke rises from the curing epoxy, it is likely the epoxy is damaged and should be replaced.

Adding solvent is a quick, simple method of thinning epoxy, but unlike using heat to thin it, the strength and moisture resistance of the cured epoxy are drastically affected. Below are some of the effects adding solvent has on WEST SYSTEM epoxy. While there are a large number of chemicals available to thin epoxy, we selected acetone, lacquer thinner and denatured alcohol for this discussion because they are commonly available and do a good job of reducing viscosity. Additionally, these solvents evaporate quickly and are less likely to be trapped in the cured epoxy—an important characteristic. For a variety of reasons, fast evaporating lacquer thinner appears to be more appropriate for thinning purposes than acetone or alcohol. 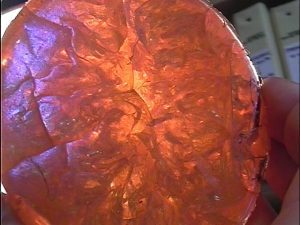 Does thinning epoxy make sense? In some situations, thinning is appropriate. In others, it is not. We feel that in most circumstances using heat to thin epoxy is preferred to using solvents. As long as the epoxy does not overheat during cure, the full physical characteristics of the cured epoxy remain. Adding solvent is a quick, simple method of thinning epoxy, but the strength and moisture resistance of the cured epoxy are significantly reduced.

We will continue to research this subject and publish our findings in Epoxyworks.